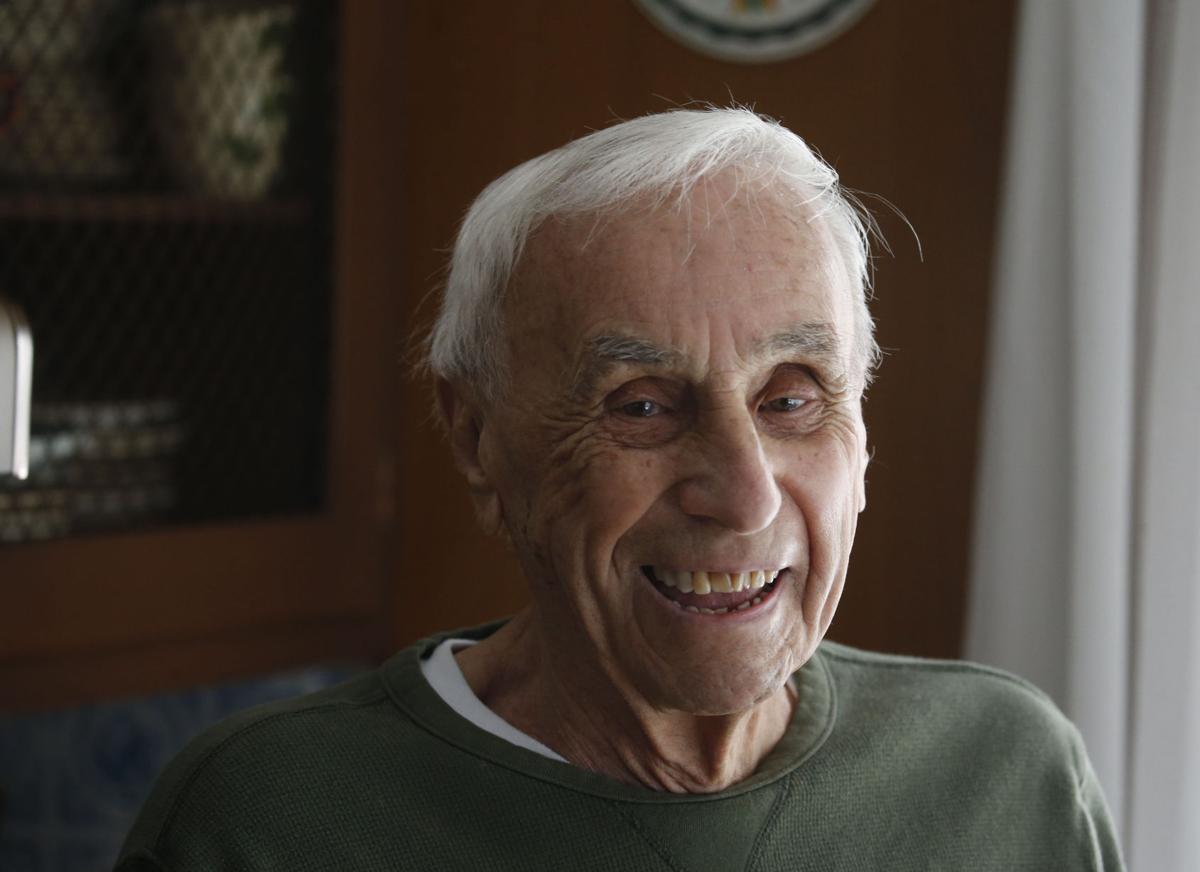 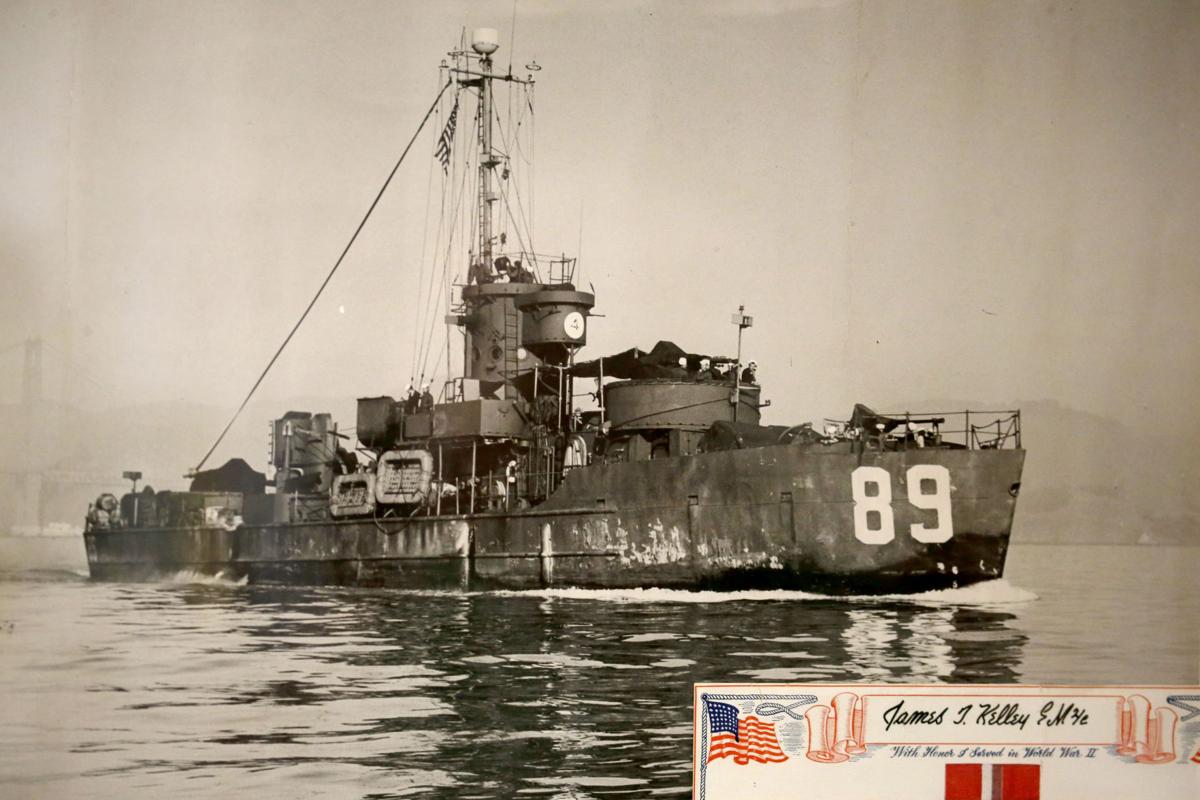 A photo from the 1940s of the Navy ship that James Kelley of South Buffalo served on during World War II. This was copied from his photo collection. (Robert Kirkham/Buffalo News) 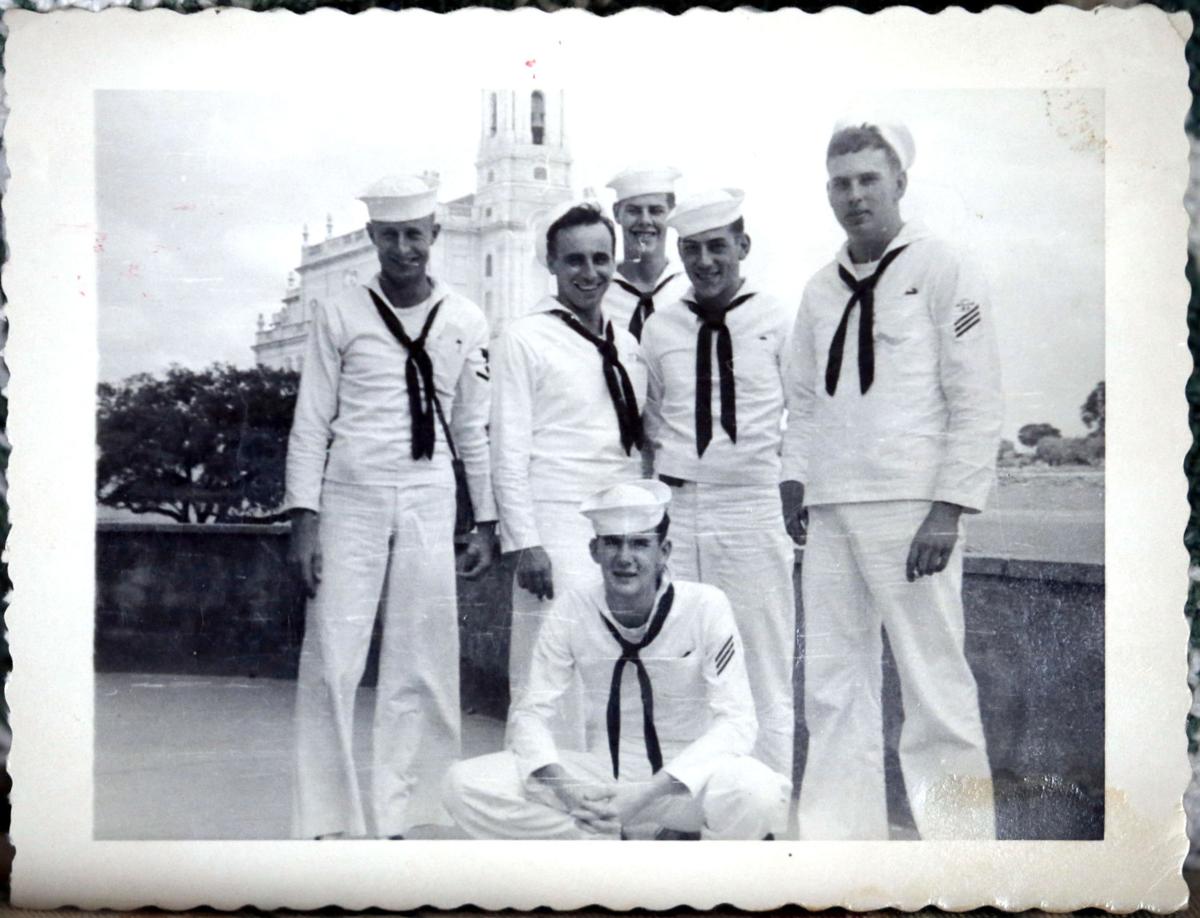 An old photo from the 1940's of World War II sailor James Kelley, second from left standing, with some Navy buddies. This was copied from his photo collection. (Robert Kirkham/Buffalo News)

James T. Kelley Sr. has a warm smile that quickly turns to laughter.

"I just liked the Navy — the water, the boat, the camaraderie," Kelley explained.

A lifelong South Buffalonian, Kelley attributes his affinity for most things marine-related to having grown up near Buffalo Creek and not far from the Buffalo River. In fact, he was ready to enlist in the Marines soon after the United States entered World War II on Dec. 7, 1941. The problem was, he was only 16.

"The neighborhood guys were all looking to join and did, but my dad was adamant that I finish high school first," said Kelley.

After graduating high school in 1943, Kelley went to work for Worthington Pump on Roberts Avenue off Clinton Street, until he was drafted the following year. He and a few other guys from his neighborhood went downtown to the U.S. Post Office on Ellicott Street, determined to enlist in the Marines.

Unfortunately, the Marine recruiters informed Kelley that they had already filled their quota of volunteers. So he went to another line and a Navy recruiter approached him.

“The officer says to me, ‘I hear you want to be a Marine.’ I told him all about how I grew up near the Buffalo Creek and in the river. So I said, ‘If I had my druthers, I’d rather be in the Navy.’ He took me down, put me in line and said, ‘Put this lad in the Navy' and, bingo, I was in,” Kelley cheerfully recalled.

Kelley said it was a bittersweet moment seeing his high school sweetheart and future wife, Rose Marie Esposito, and her father in the distance from a train window as he rolled off to his new adventure.

"We were leaving from the depot down in lower Main Street, and the train ran by my father-in-law's outdoor market, and they were out there waving to me when I was going to boot camp," Kelley said.

After his training as a Navy electrician, Kelley wound up as a gunner aboard a small warship sailing with much larger destroyers in the Pacific Ocean, off the coast of Japan. He said his most tense moment of combat was firing at an enemy plane that seemed determined not to go down.

"It was zeroing in on our ship, and I could see the tracer bullets from the gunfire. There was a period of time there where I wondered, why doesn't it fall? Why doesn't it stop?" said Kelley.

Both exhilarated and scared, he watched as the plane flew closer towards the ship. Though only minutes had passed, it seemed like an eternity before it fell.

"Eventually, about one or two football fields away, boom! It was in the ocean," Kelley recalled.

Kelley returned to the States and was discharged in 1946. He married Esposito the following year. They had two children, a girl and a boy, before the Navy recalled him, much to his wife's chagrin.

This time, Kelley ended up spending most of his time in Europe and at ports in the United States.

“It was like a vacation, that year-and-a-half,” he said.

When his tour was up, the ship's commander tried to talk Kelley into signing up for another four years in the Navy.

"I liked the service. My wife changed my mind. 'You come home,' she told me," Kelley said.

Kelley went to work for the Buffalo Fire Department and the couple had two more daughters.

Kelley also moonlighted as a counselor for the Father Baker orphanage in Lackawanna. He retired from the fire department in 1983 after 27 years. He also worked for the New York State Office of General Services. But he still found time for recreational sports.

“I love to play ball, softball. I played a lot of softball. Up until I was 50, I played three nights a week. I played for different taverns,” Kelley said.

A catcher, Kelley was inducted into the Western New York Softball Hall of Fame in 1983.

He and his wife were married 69 years until her death in April 2017. Kelley's son, veteran Buffalo News sportswriter Jim Kelley, died in 2010.

He is still cherished and doted on by his three daughters, Cathy Dengler, Carol Murphy and Karen Heck, six grandchildren and several great- grandchildren.

"I've been very fortunate in my life," Kelley said.

A photo from the 1940s of the Navy ship that James Kelley of South Buffalo served on during World War II. This was copied from his photo collection. (Robert Kirkham/Buffalo News)

An old photo from the 1940's of World War II sailor James Kelley, second from left standing, with some Navy buddies. This was copied from his photo collection. (Robert Kirkham/Buffalo News)