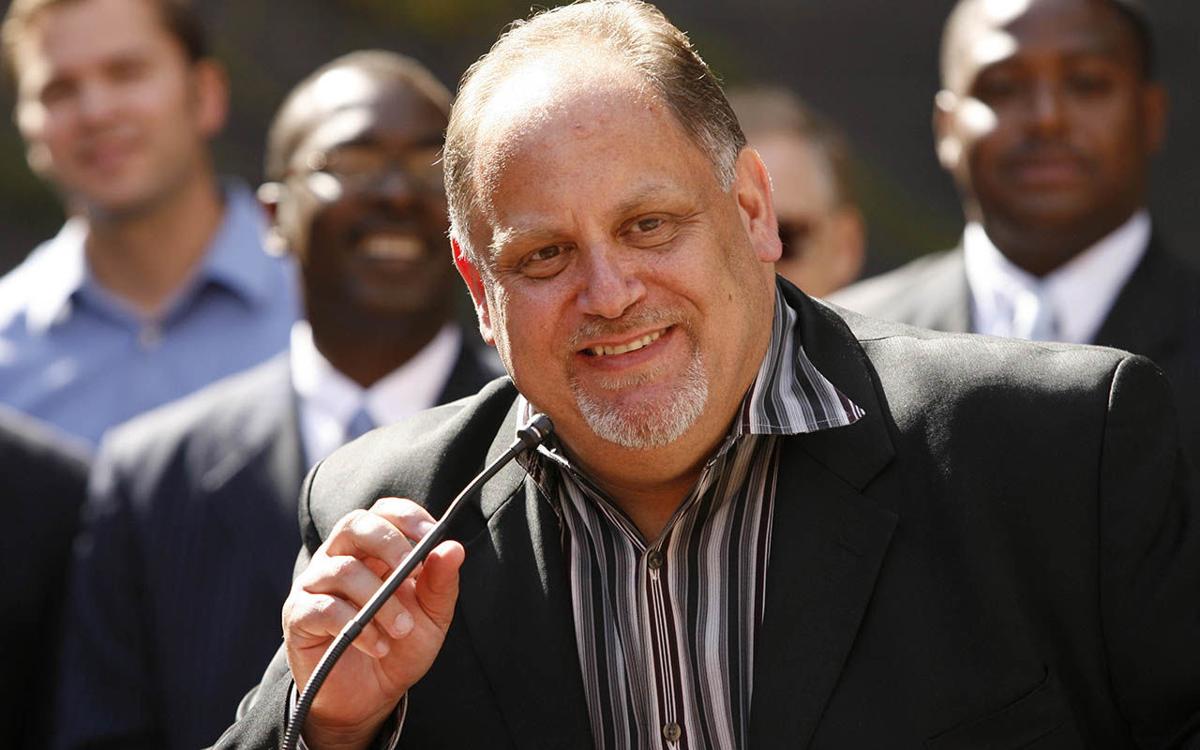 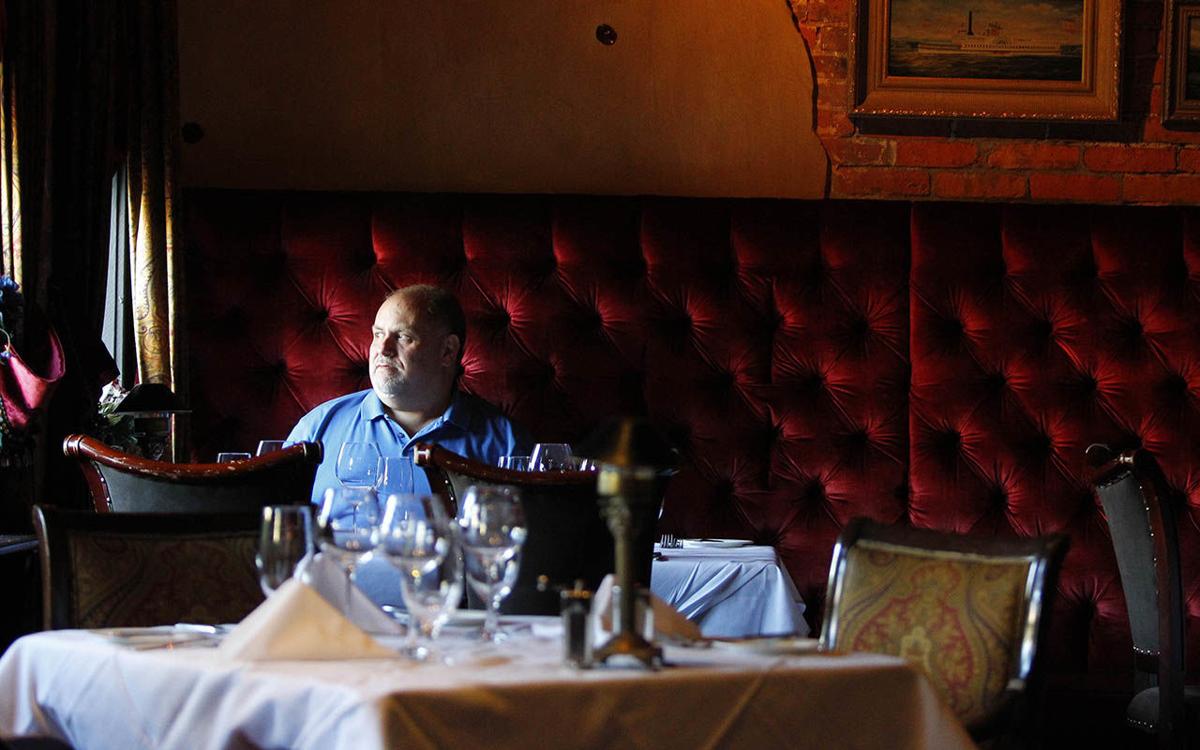 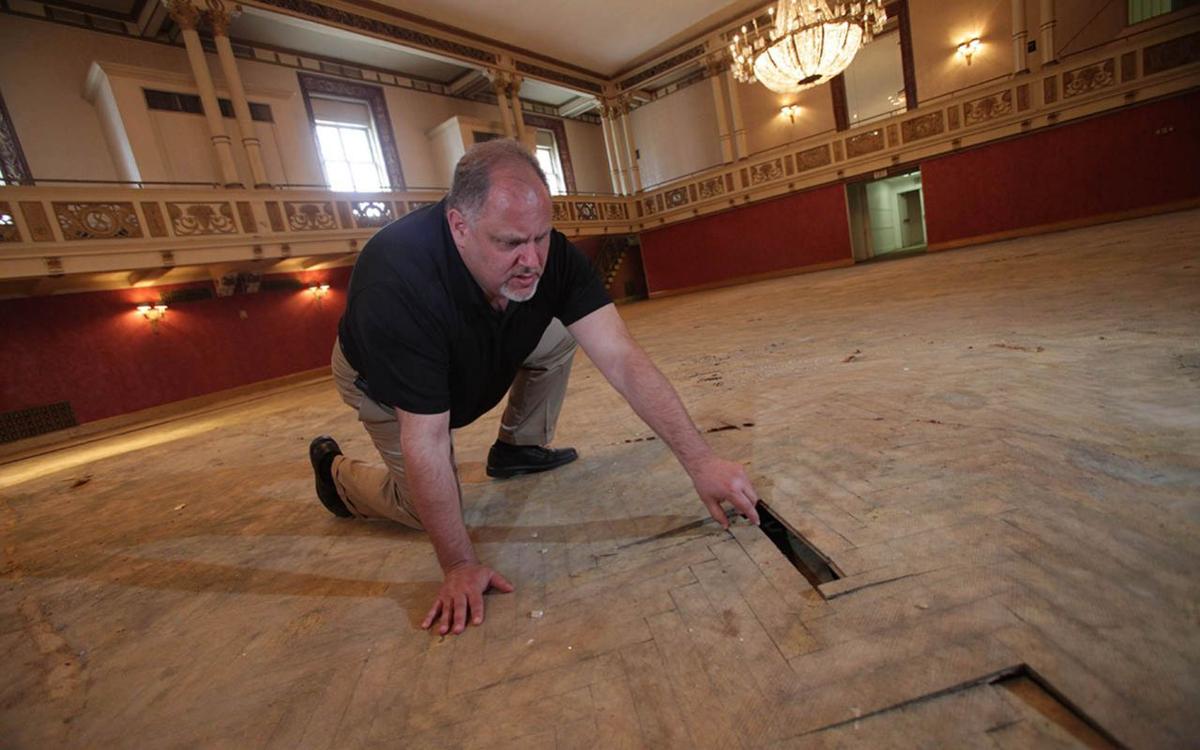 In 2011, Mark Croce showed the herringbone floor in the Statler Golden Ballroom that had been damaged by wet carpet. (Sharon Cantillon/News file photo)

Developer Mark Croce, who put his stamp on Buffalo with his involvement in several prominent projects, was mourned Friday by Western New York leaders in the wake of the news of his death in a helicopter crash Thursday night in Pennsylvania.

Croce was the owner of Statler City, Curtiss Hotel and the Buffalo Chophouse.

Croce, 58, and Michael Capriotto, 63, both of Orchard Park, were killed in a helicopter crash Thursday evening in Mechanicsburg, Pa., the Cumberland County Sheriff's Office reported.

"I am deeply saddened by the sudden and tragic passing of my dear friend Mark Croce," Buffalo Mayor Byron W. Brown said in a statement posted on Facebook.

"As owner of the Buffalo Chophouse, the Curtiss Hotel and Statler City, Mark was a big part of our downtown resurgence, adding jobs for residents and creating destinations that have brought many visitors to the City of Buffalo. His presence will be sorely missed. Please join me in sending prayers of comfort to his family and many friends."

Rep. Brian Higgins called Croce "as big a booster of Buffalo as there ever was" via Twitter.

Higgins tweeted: "Terrible news this morning to hear of the deaths of WNYers Mark Croce & Michael Capriotto. Mark was a longtime friend & as big a booster of Buffalo as there ever was. Our hearts go out to Mark’s loving wife Jessica & their children as they deal with this incomprehensible tragedy."

Croce bought Statler City out of foreclosure in 2011 and invested millions in the 18-story, 750,000-square-foot building that was built in 1923 and had been one of the nation’s prominent hotels at that time. Statler City has been operating successfully as a catering and banquet facility for the past few years. In June 2019, Croce filed plans with the Buffalo Preservation to spend $3 million on a series of exterior repairs and renovations as part of a comprehensive restoration of the building’s first two floors.

The Curtiss Hotel, originally the Harlow C. Curtiss Building and one of the tallest buildings in Buffalo when it was built in 1913, was an office building that fell vacant in the 1990s. The building had changed hands, and names, several times over the years before eventually being purchased Croce in 2002. After a $24 million investment, it opened as a luxury boutique hotel in June of 2017.

"Mark Croce was a significant partner with my administration in the transformation and revitalization of downtown Buffalo," Masiello said. "He was a pioneer who saw the great potential of our city, recognizing and embracing the rich, historic fabric and character of downtown, its buildings and businesses. He invested his own money in projects and in people, leading to Buffalo's renaissance which continues today. His great passion and love for Buffalo was only exceeded by his love and devotion to his family."

"I'm devastated to hear of the deaths of Mark Croce and Michael Capriotto. Mark was a catalyst in our city’s transformation, a true believer in Buffalo, and a dear friend. His vision and spirit will be missed. Praying for their families as they navigate this profound loss."

Croce's Buffalo Development Corp. released a statement Friday afternoon to thank supporters and that it wanted "to assure the employees and the public that the businesses will continue without interruption."

"Buffalo Development Corp. and affiliated companies want to thank all of those who have reached out with condolences, thoughts and prayers for the family of Mark Croce.

"Mr. Croce's family and the companies wish to express their deepest sympathy to the family of his passenger."

James Sandoro, the executive director of the Buffalo Transportation Pierce-Arrow Museum, said he was friends with Croce for 30 years, referring to him as "my little brother."

"I called him a shooting star," said Sandoro, describing him as very smart and driven. "He just lit up everything and just loved Buffalo.

"There was no stopping him when he had an idea of doing something. He saved buildings, restored buildings, and brought a lot of jobs to Buffalo. He even created an upscale steak house when everyone said it wouldn't work. I think everybody is proud of what he did for Buffalo."

Sandoro said they spoke on the phone almost daily.

"He was like my little brother, and I'm going to miss him badly."

Paul Ciminelli, CEO of Ciminelli Real Estate Corp., said, "I’ve known Mark for over 25 years, and in that time he has made significant investments in downtown Buffalo. He was a true entrepreneur and extremely passionate about everything he did. It’s a sad day for this community. He will be greatly missed."

Mark Hamister, CEO of the Hamister Group, was often on the other side of Croce in business situations, lauded him.

“We’re deeply saddened to learn about Mark’s tragic accident. His death is a real blow to Buffalo,” said Patrick Hotung, president of Violet Realty Inc. and general manager of Main Place Liberty Group. “No one did more to lead Buffalo’s renaissance than Mark.”

The Buffalo Public Schools issued a statement, calling him a "champion" for its students. One of Croce's projects was a second Emerson School of Hospitality at 75 W. Huron St.

"It is with profound sadness that the Buffalo Public Schools notes the passing of Mr. Mark Croce. Mr. Croce was a champion of authentic access and opportunity for our students, particularly in the hallmark culinary and hospitality industries of the Buffalo region. He believed that our students should be engaged at the epicenter of Buffalo’s rising economy and workforce. The Buffalo Public Schools extends our deepest condolences to Mr. Croce’s family and loved ones. He will be missed by all of us."

The Erie County Sheriff's Office mourned the loss of Croce, who was a member of the Sheriff's Reserve Scientific Staff, which is described as a volunteer advisory group "of highly skilled individuals to provide technical assistance."

The ECSO lost a valuable member of our Reserve Scientific Staff last night with the tragic death of Mark Croce.

Mark first served on the Reserve Aviation Unit and has served the Erie County Sheriff's Office and this community admirably.

This is a loss for our community.

Croce is survived by his wife, Jessica, and sons Dominic and Dante.

"I am saddened to learn that two treasured members of our community were killed in a helicopter crash in Pennsylvania," Mychajliw said. "Mark Croce believed in the resurgence and potential of Buffalo when not many others did. Mark took a chance on developing in Buffalo, and in doing so, he inspired others to follow suit. Mark was the spark, the catalyst, of our downtown core’s rebirth. He was so committed to our city and region, a true believer who worked to make Buffalo a better place. My heart goes out to his family."

Capriotto was a former Orchard Park village trustee who was part of several Orchard Park businesses and organizations.

"Michael Capriotto, also of Orchard Park, was passionate about his community as well," Mychajliw stated. "A businessman who invested in Orchard Park, he always said 'yes' and answered the call when people or charitable causes needed help. ...

"Mr. Capriotto was actively involved in supporting the Veterans Memorial Park in Orchard Park and had served on the board of Woodlawn Cemetery, among many worthy organizations. He owned the Kwik Fill directly across from Orchard Park Town Hall. He was a well-known businessman and philanthropist who always gave back to the community he loved. Our hearts are heavy today with the loss of these two great men."

Croce and Capriotto were also mourned by the Amherst Chamber of Commerce, which will hold a moment of silence in their honor at the group's luncheon Friday.

In 2011, Mark Croce showed the herringbone floor in the Statler Golden Ballroom that had been damaged by wet carpet. (Sharon Cantillon/News file photo)