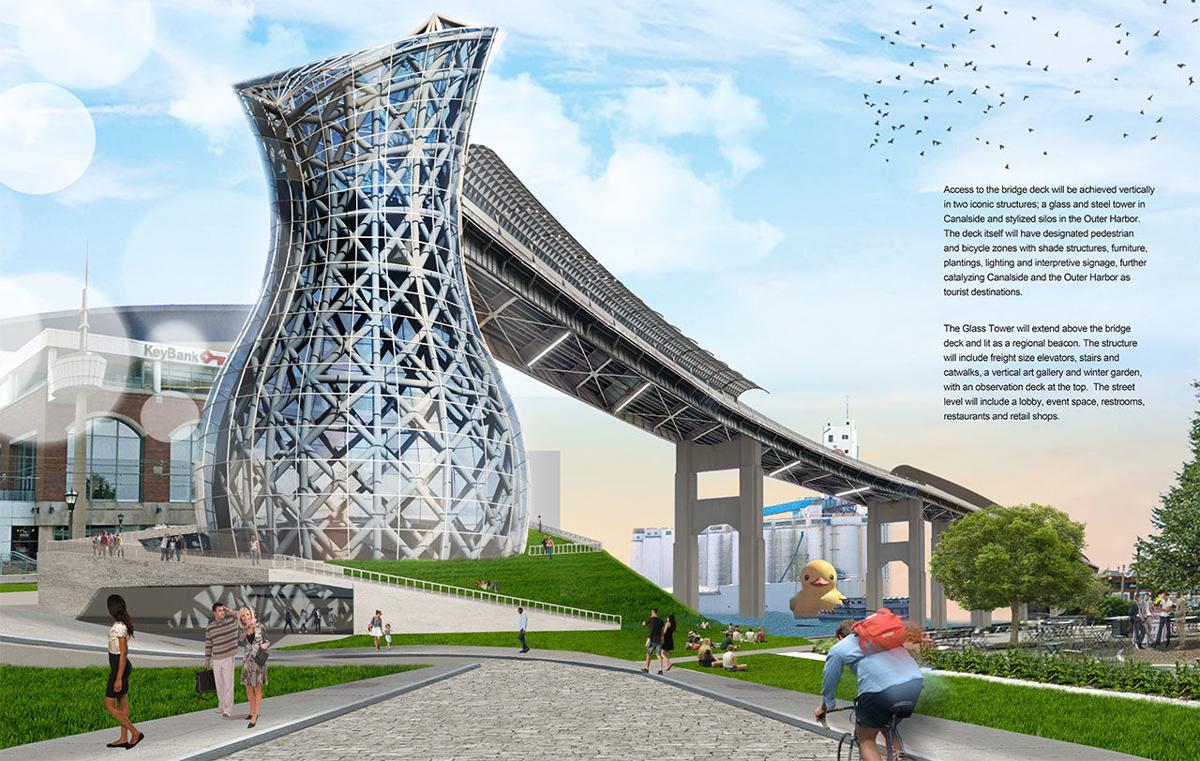 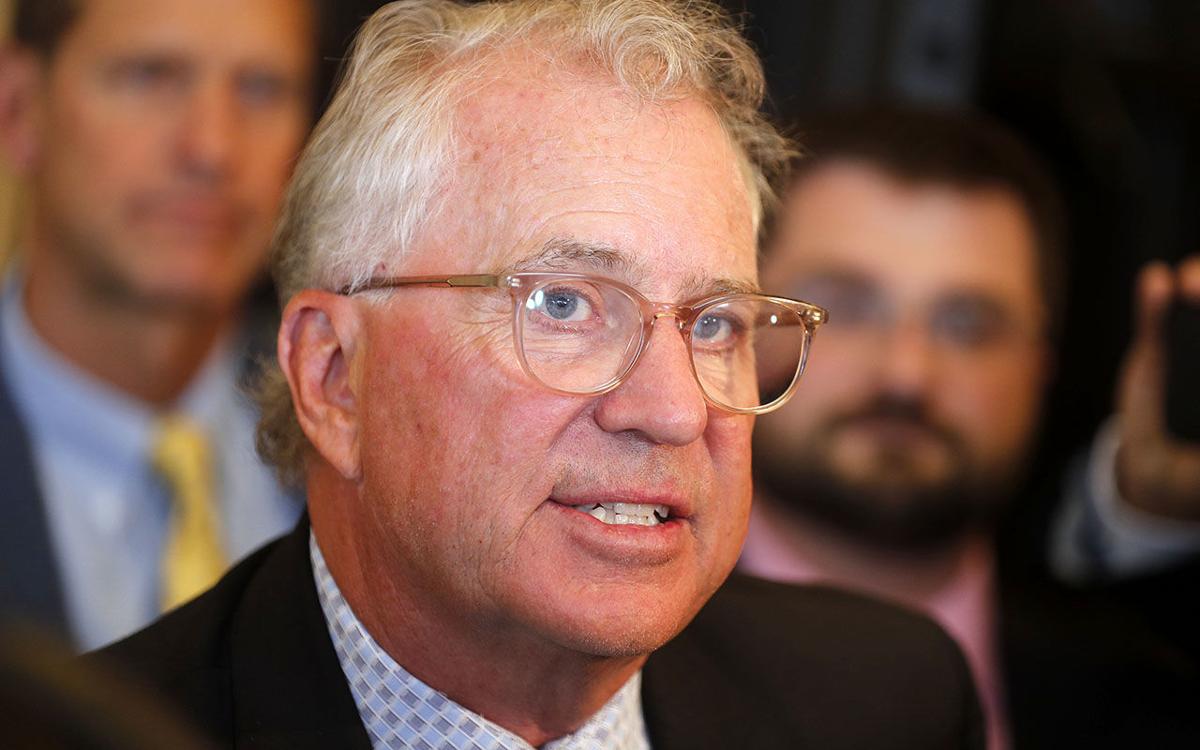 William Price from the groups SWBR/Fisher Associates/MRB Group speaks to the media after their winnign design; The City of Lights: Owning our Waterfront won the Skyway design competition at One Seneca in Buffalo Tuesday, September 17, 2019. (Mark Mulville/Buffalo News) 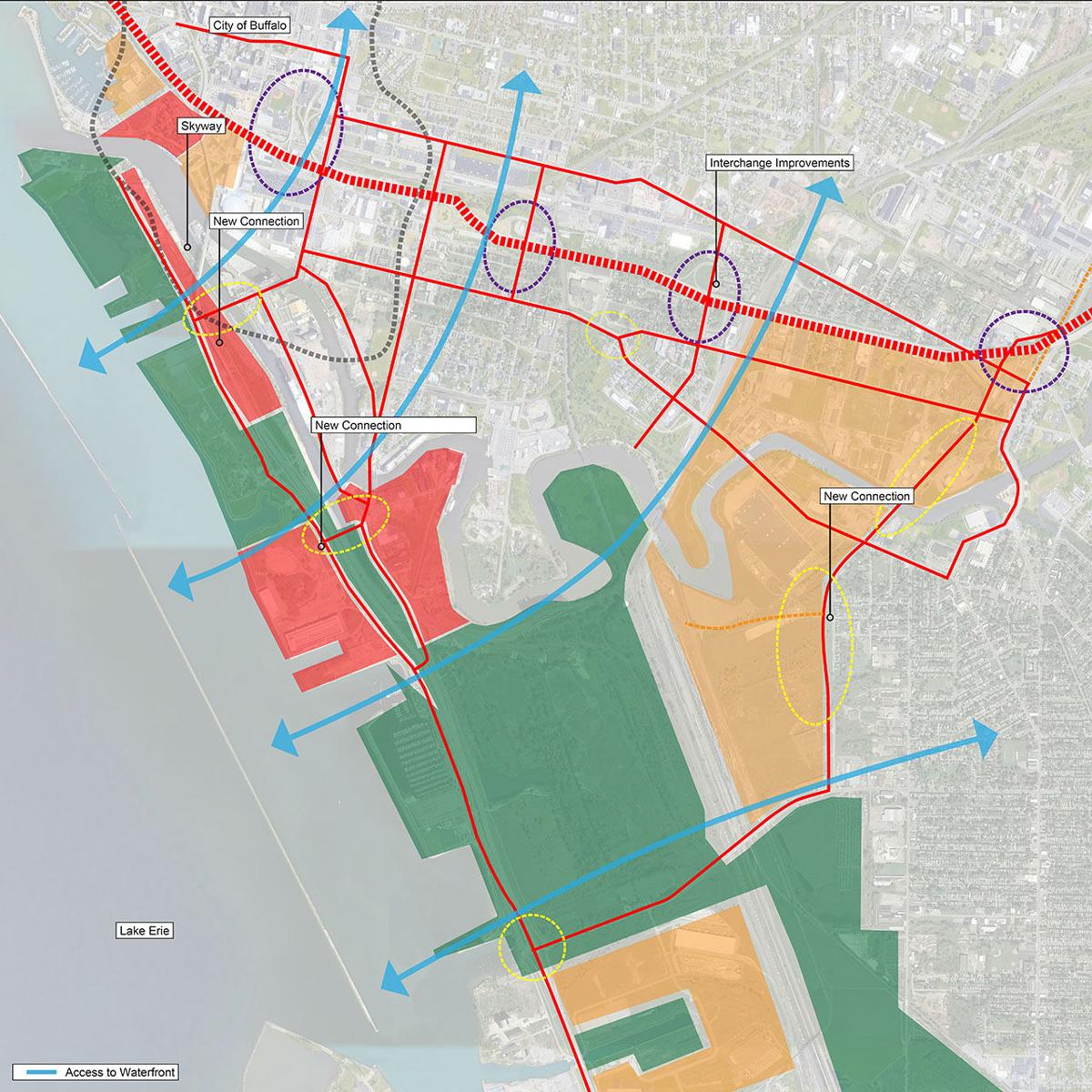 "City of Lights" entry was picked as the winner of the Skyway corridor competition.

The "City of Lights" entry picked Tuesday as the winner of the Skyway corridor competition calls for removing part of the Skyway and its access ramps from Church to Prime streets, making 12 acres available for development in downtown and Canalside.

The part of the Skyway bridge that remains – approximately half – would be transformed into “SkyPark,” providing scenic views from on high with recreational amenities. The winning submission calls for a lift bridge to be built at Michigan Avenue to connect to the Outer Harbor.

“Is the Skyway going to come down? Yes, yes," said Gov. Andrew Cuomo, who attended the selection jury's announcement at Seneca One tower. "I believe it will happen because of what has happened already, and what is happening in Buffalo right now. We just have to keep it going."

Cuomo pledged $10 million toward the cost of the environmental study for the Skyway project. He also said the state would commit 20% toward what he estimated could be a $600 million project. Cuomo said the state would expedite the process, enabling infrastructure work to be completed in five to six years if federal funds are available.

Tearing down the Skyway would come after that.

The winning selection will set the vision for how to move forward, even if all of the details are not necessarily followed, said Howard Zemsky, chair of Empire State Development and chair of the selection jury. A hybrid of ideas is likely to emerge, he has said.

The selection capped a six-month competition. Contestants were asked to reimagine the future of the Skyway along its full 4-mile corridor along Route 5 from downtown to Ridge Road in Lackawanna.

The winning entry, from SWBR/Fisher Associates/MRB Group out of Rochester and Saratoga Springs, receives a $100,000 prize.

The second-place winner, garnering a $50,000 prize, was the "Skyway River Loop" entry from the Marvel Architects team in New York City. Finishing in third place, with a $25,000 prize, was "Queen City Harbor: Bringing Buffalo to Water's Edge," by a team from Washington, D.C.

The first- and third-place entries called for removing all or most of the Skyway. The second-place "Skyway River Loop" entry called for keeping it.

Each of the nine finalists gave 3-minute presentations and answered questions for 5 minutes from the selection jury prior to its decision.

The jury, with urban planners and architects among its ranks, included Lynn Richards, president and CEO of the Congress for the New Urbanism; Lee Fisher, dean at Cleveland-Marshall College of Law at Cleveland State University; and Hal Morse, executive director of the Buffalo-Niagara Regional Transportation Council.

Rep. Brian Higgins said he was elated by the governor's decision to provide funding and fast-track the environmental review process.

"The $10 million announced by the governor is something we had been pushing for for at least a decade," Higgins said.

Higgins has committed to seeking the federal dollars needed for a Skyway project. Traditionally, the federal government covers 80% of the costs of such projects, with the state spending 20%.

The team that submitted the winning entry estimated the total project cost at $340 million. That includes a $61.2 million demolition and $179.4 million in improvements. The improvements include the Skyway park ($60 million), new bridges ($48 million), new roads ($42 million) and open space and habit restoration ($10 million).

More than 42,300 vehicles on average cross the Skyway daily, according to the state Department of Transportation. But Morse, of the regional transportation council, said the jury was confident the traffic management plan outlined in the proposal would effectively divert traffic.

Cuomo said removing the Skyway downtown would be a boon for additional development.

“This is creating an entire new downtown space. It’s a blank sheet of paper," Cuomo said. "Just remove the Skyway and all the connected ramps and … you have a whole new downtown tomorrow.”

The governor said the traffic studies would explore the impact of removing the Skyway on commutes.

"Some people aren’t open to facts. ‘I like it the way it was. I don't want to change my route.’ I get that," Cuomo said. "But rational people are open to facts and the traffic study part of the EIS will have the facts."

William Price, an urban designer with the winning team, said he went "numb" when the jury announced its decision.

He said the removal of the Skyway in the city would open land for development and allow Canalside to reach its full potential. It would also allow breathtaking views from on high, with elevators to take people and bicyclists to the top.

"This is going to let people view the skyline of the City of Buffalo in a way they've never been able to see it before, and really appreciate the fact you're at the end of Lake Erie," Price said.

Traffic would be dispersed through a drawbridge with an upward swing at the foot of Michigan Avenue, a new road at Tifft Street that connects to Seneca Street and the I-190, and interchanges at Louisiana, Smith and Hamburg streets and Fillmore Avenue.

"We also think over the next 20-30 years that type of commuter traffic will start to wane and dissipate as people start to live more downtown," Price said.

He compared the plan to the walkway over the Hudson River in Poughkeepsie, where a concrete deck covers a former railroad bridge, with a glass elevator that goes down to the Hudson River.

"They were all outstanding," said Fisher of Cleveland-Marshall College of Law. "Each of them was visionary, so what we had to do was combine how visionary it was with how practical they were, so there were difficult decisions as a result."

"I think we all really appreciated the diversity of the submissions, running the gamut from clearly removing the Skyway to re-envisioning it for the future," said Jennifer Vey, director of the Bass Center for Transformative Placemaking at the Brookings Institution. "There was a healthy debate on who should make that final cut, but ultimately we came down and were pretty unified about who ultimately got the top three slots."

Mayor Byron Brown, who served on the panel, called the proposals "compelling and inspiring in their scope."

The "Skyway River Loop" entry – from the team that included architect Barbara Campagna and Scot Fisher, both of Buffalo – proposed keeping the Skyway with pedestrian and bicycle access, street-level greenways and no longer an adjunct of the I-190. The plan also called for rebuilding the former South Michigan Bridge to the Outer Harbor and a second bridge from Ohio Street near the southern terminus of the City Ship Canal.

"We keep the Skyway in its original 1954 plan," Campagna said of that second-place plan. "We take it back to being a bridge, and still provide access to the Southtowns and maritime access to the Buffalo River and all of its industry without having to build a new lift bridge."

The "Queen City Harbor" plan, which placed third, called for removing the Skyway entirely and creating dense neighborhoods by the water's edge. A new lift bridge to the Outer Harbor would be at the foot of Main Street. The pylons would be reused for renewable solar and wind energy.

Washington, D.C., team member Christian Calleri, who grew up in Kenmore and North Buffalo, said he thinks dense development will be necessary to help pay for whatever the city and state move forward with.

Post-Skyway proposal borrows from Buffalo's past to design its future

The plan calls for re-creating the historic Canal District by bringing back a neighborhood with small-scale apartments and other structures.

William Price from the groups SWBR/Fisher Associates/MRB Group speaks to the media after their winnign design; The City of Lights: Owning our Waterfront won the Skyway design competition at One Seneca in Buffalo Tuesday, September 17, 2019. (Mark Mulville/Buffalo News)

"City of Lights" entry was picked as the winner of the Skyway corridor competition.