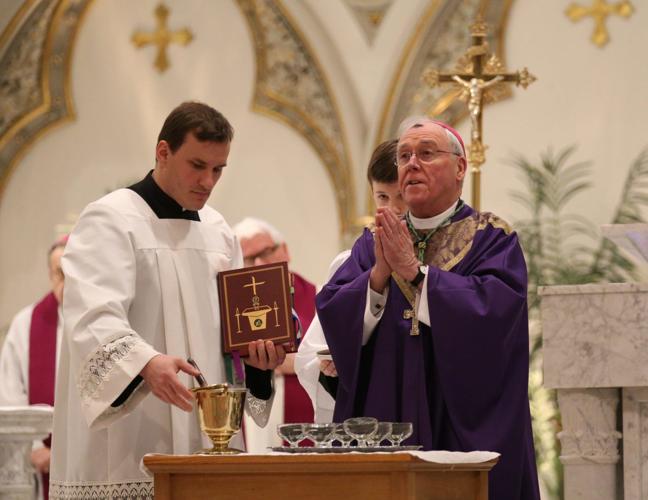 The Rev. Ryszard Biernat is by the side of Bishop Richard Malone as Malone celebrates Mass at St. Joseph Cathedral in 2017. (Sharon Cantillon/Buffalo News) 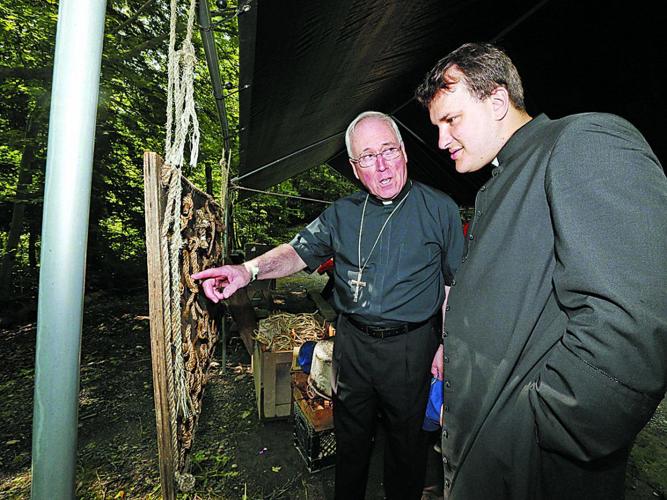 Bishop Richard J. Malone and the Rev. Ryszard Biernat, right, look at scouting knots displayed on a board at a camp site. (Robert Kirkham/Buffalo News) 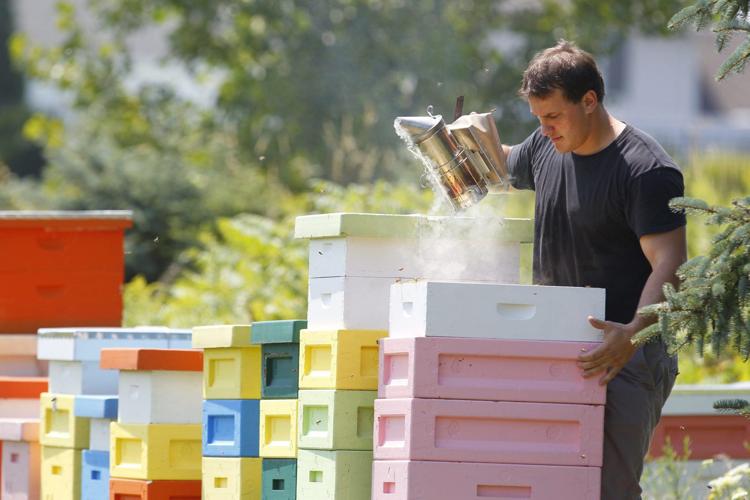 Support this work for $1 a month
By Dan Herbeck, Jay Tokasz

When he served at St. Amelia Church in the Town of Tonawanda, the Rev. Ryszard S. Biernat would sometimes stun parish members with his deeply emotional sermons.

The earnest young priest used to talk about growing up in Poland, where he said he hung around with the wrong people and got into serious trouble as a teenager. He talked about his battles with depression and self-destructive thoughts, and how his faith in Jesus Christ turned his life around.

“He was so open about his darkest fears and feelings. He would share things you’d never expect from any priest,” recalled Jeanne Phillips, a longtime parishioner and choir member at the Town of Tonawanda church. “It was surprising.”

Last year, Biernat surprised people again while preaching a sermon at another Town of Tonawanda church, when he spoke about a priest who had sexually abused him years earlier, when he was a seminary student.

Earlier this week came the biggest surprise of all: Biernat revealed to a local television reporter that he had been secretly tape-recording conversations with his boss, Bishop Richard J. Malone. The recordings were made while Biernat was serving as the bishop’s priest secretary, his closest aide. Serving in that role for six years, he spent more time with the bishop than any other person in the Diocese of Buffalo.

What made Biernat’s move even more stunning is that it came a little more than a year after Siobhan O’Connor, the bishop’s executive assistant, resigned from her job, turned over hundreds of pages of internal diocese documents to the same WKBW-TV reporter and talked to federal agents.

“I think Father Ryszard had hopes that he could change the diocese from within by continuing to work for the bishop, but he came to realize that nothing was going to change,” O’Connor told The News on Thursday. “Like me, he witnessed all the cover-ups in the way Bishop Malone handled child abuse case. He saw the way Malone spoke in public about these cases, as opposed to how he dealt with them in private. I just don’t think Father could deal with it anymore.”

“One thing the bishop is really good at,” O’Connor added, “is turning people close to him into whistle-blowers.”

In a lengthy interview Thursday evening with two Buffalo News reporters, the priest said he was distressed about the way Malone and other diocese officials handle complaints about sexual abuse by priests.

“At 795 Main, there is no bigger crisis than when the truth comes out,” he said, referring to the diocesan headquarters at the Catholic Center.

Biernat sobbed as he said those words.

Biernat’s attorney, Barry N. Covert, told The News that Biernat began recording his talks with Malone because he was upset over Malone’s handling of the case of the Rev. Jeffrey Nowak, a priest accused of sexually harassing a seminary student. Covert said Biernat reached the conclusion that the bishop has been acting in his own self-interest rather than the best interest of the diocese and its churches.

Speaking at a news conference Wednesday, Malone defended his handling of the Nowak case and other matters. Despite mounting criticism of his leadership, he said he will not step down.

Malone said he is stunned and disappointed that Biernat recorded private conversations and gave them to members of the media. Since becoming priest secretary in 2013, Biernat has been the bishop’s near-constant companion at diocese meetings and church functions all over Western New York.

“I felt like I was hit by a bolt of lightning, emotionally, by it. It was the last thing in the world I ever expected or anticipated in my relationship with Father Ryszard. That’s all I can say. I was just stunned and dismayed by it. I just never saw it coming,” Malone said, when asked about Biernat’s tape recordings. Malone said the tape recordings made by Biernat violated the church’s canon law.

The bishop added that he is concerned about a letter that Biernat sent to the same seminarian who was allegedly harassed by Nowak. The News and other local media received a copy of the letter, in which Biernat repeatedly expresses his love for the seminarian. Covert said the letter is an expression of friendship.

“Even in the worst-case scenario, this is a letter about a relationship between two consenting adults,” O’Connor said. “Some people seem more concerned about this letter than they are about covering up the actions of predator priests who have molested children.”

So who is Biernat, and how did he wind up in the eye of the media hurricane surrounding the troubled Buffalo diocese?

During a 2012 interview with The News, he spoke of growing up in the small town of Limanowa, Poland, and moving to America in 2002 to begin studies for the priesthood. He said he was ordained in 2009, and his first assignment was at Nativity of Our Lord Church in Orchard Park before becoming an associate pastor at St. Amelia, one of the diocese’s biggest parishes.

But most of the article concentrated on his hobby of keeping bees – millions of them – and harvesting honey, which he bottled and sold in area parishes as "Father Ryszard's Holy Honey." Proceeds from the sales were used to sustain the apiaries where Biernat kept his bees.

Biernat said his bees served as a touchstone for his faith, as well as a regular source of inspiration for his homilies and daily conversations with people.

He said he spent many Sunday afternoons checking on the hives, each of which can house as many as 200,000 bees.

"It's my time for prayer," he said. "You feel close to nature and, through that, closer to God."

But friends say Biernat has told them he also has endured some difficult times since coming to Western New York to study at Christ the King Seminary in East Aurora.

While he was a seminarian in 2004, Biernat was sexually harassed and molested by a Buffalo priest, according to Jennifer Kane, a close friend who has known Biernat since 2006.

Biernat reported the sexual abuse to diocese officials, and “their response was unholy and shameful,” Kane said. She said the diocese’s lack of action in response to his complaint “left an indelible mark” on Biernat.

As a priest, Kane said, Biernat has always “committed himself to seeking justice for the weak and vulnerable.” She said she believes that is one reason why Biernat turned against Malone and other leaders of the diocese. Kane said she believes Biernat was impressed and inspired by the actions of O’Connor, who walked away from her job in the diocese and began crusading for major changes in how the diocese handles child abuse complaints.

Kane, a church volunteer in Olean, described Biernat as a deeply caring individual who “brings joy” to his work as a priest, whether he is working with children or consoling a person who is dying.

O’Connor said she and Biernat became close friends while working together for the bishop for three years. After leaving her own job, O’Connor said, she urged Biernat several times to do the same.

“I was almost desperate for him to get out of there, because I knew the atmosphere was toxic for him,” O’Connor said on Thursday. “The bishop would be giving all kinds of compliments to Father one day, and the next day, he would become angry with him because he forgot to make sure the bishop’s miter hat was not on straight when someone took a picture.”

“I encouraged him to leave, but I never orchestrated anything,” O’Connor said. “Ultimately, Father made his own decision to leave.”

When asked about Biernat’s call for Malone to step down, diocese spokeswoman Kathy Spangler said Biernat is “entitled to his opinion.”

How much of the debt Douglas MacKinnon is offering to pay is unclear – the proposal was not described during a status conference in federal court Monday or in any publicly filed court documents.

“There's good news, but it is coupled with the sobering reality that we have significant problems that linger,” said Brian Smith, associate executive director of Citizens Campaign for the Environment.

Buffalo School Board accepts CFO's resignation, keeps him as a consultant

The Buffalo Board of Education approved the resignation of the school district's chief financial officer at a special meeting Monday, but arranged to keep him available temporarily as a consultant.

After 30 months of border crossing impediments ranging from outright closure to required use of the ArriveCan phone app, the new development means normal traffic and commerce are free to resume.

McKegney is accused of calling and emailing a woman in April after an Erie County Family Court judge barred him from contacting her, according to a complaint filed by a Buffalo woman.

This adorable toddler chef cooks for millions on social media

The Rev. Ryszard Biernat is by the side of Bishop Richard Malone as Malone celebrates Mass at St. Joseph Cathedral in 2017. (Sharon Cantillon/Buffalo News)

Bishop Richard J. Malone and the Rev. Ryszard Biernat, right, look at scouting knots displayed on a board at a camp site. (Robert Kirkham/Buffalo News)