When it's a low bridge vs. a tall truck, the truck never wins
0 comments
Share this
1 of 3 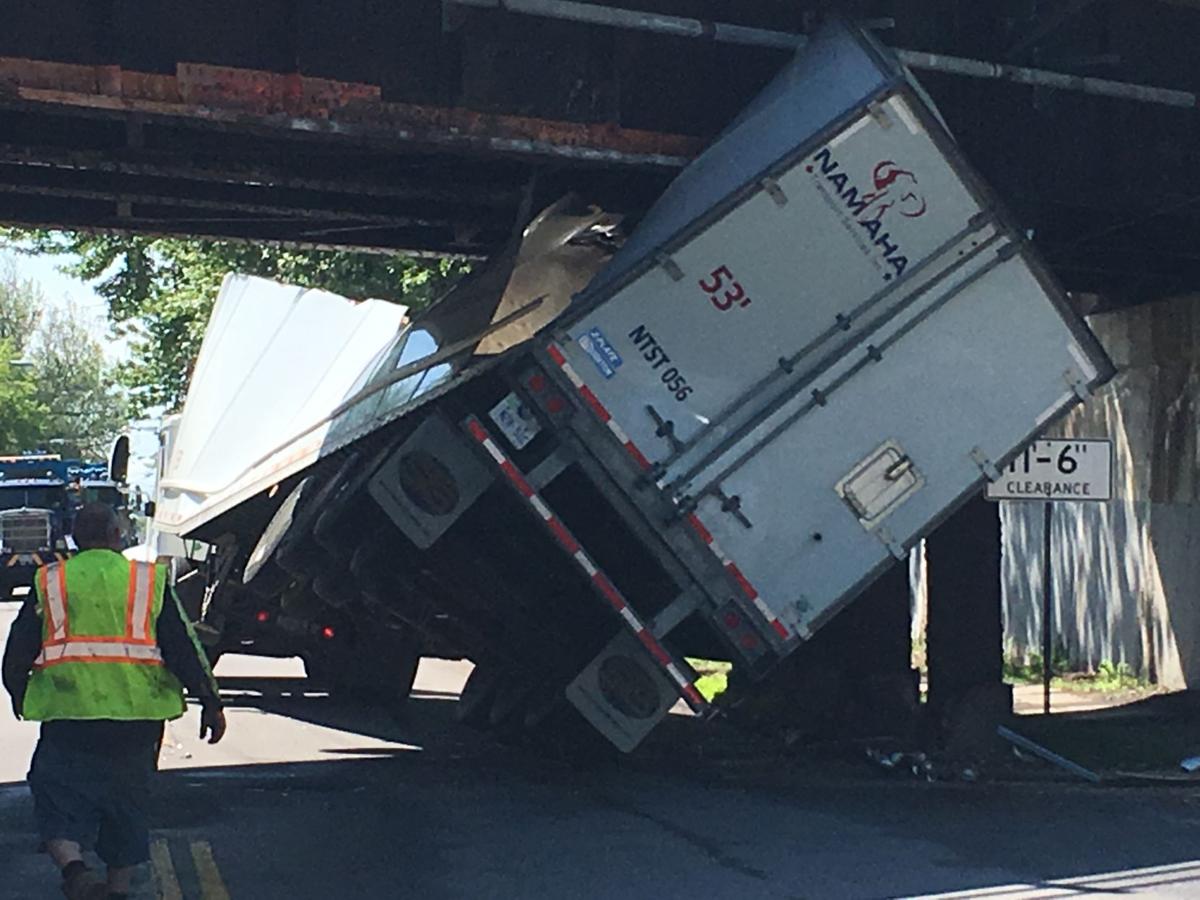 A tractor-trailer driven by Kirisanthan Senathi, 24, of Scarborough, Ont., crumpled after hitting a low railroad bridge over Young Street in the City of Tonawanda on May 30. (Photo courtesy City of Tonawanda police) 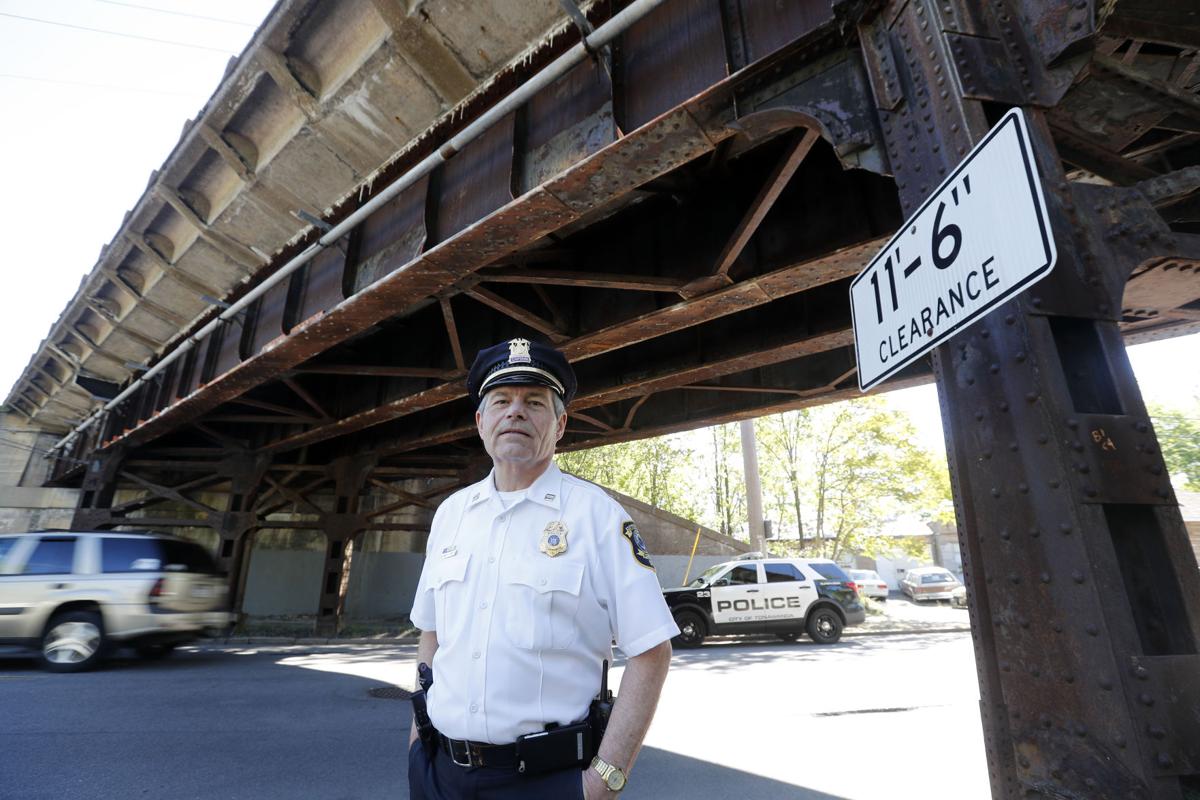 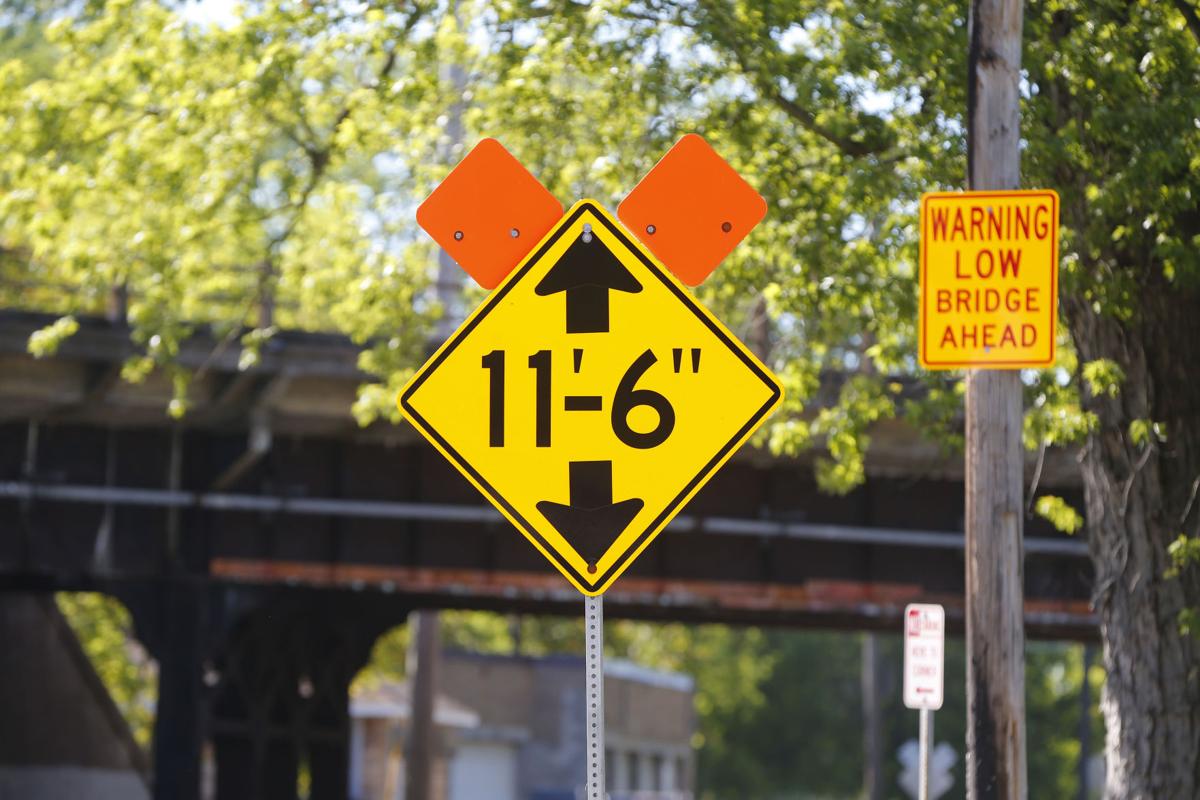 The signs are bright yellow and the lettering couldn't be clearer.

As in 11 feet, 6 inches from the surface of Young Street to the underside of the steel and concrete bridge that holds up the CSX railroad tracks above.

The diamond-shaped signs have big, black arrows, one pointed up, the other down. Some versions have two extra orange diamonds, like Mickey Mouse ears, on either side.

There are other signs, too.

"WARNING LOW BRIDGE AHEAD," says one.

But no matter what the City of Tonawanda police do, trucks keep crashing into the CSX railroad bridge over Young Street.

A young Canadian tractor-trailer driver was southbound on Young Street when the trailer hit the bottom of the bridge and crumpled like an accordion.

Nobody was hurt. The bridge was fine.

Truck driver Sanathi Kirisanthan, 25, of Scarborough, Ont., told the officer who arrived that it was his first day on the job.

Trucks hitting low bridges is a problem all over New York State and, in fact, the country. Railroad bridges built in the early 20th century are too low for today's tractor-trailers, which are generally 13 feet, 6 inches tall. There's a website – 11foot8.com – dedicated solely to video of a railroad bridge in North Carolina that has been repeatedly struck by trucks and RVs.

In most cases, there are no injuries and the sturdy bridges are barely scratched. The trucks are often badly damaged and the crashes can tie up traffic for hours, especially if the trailers were full and the cargo needs to be transferred into a new truck.

But there can tragic consequences. In 2010, four people were killed when a double-decker Megabus struck a railroad bridge on Onondaga Lake Parkway near Syracuse.

City of Tonawanda Police Captain Fredric Foels says the crash Tuesday was the 53rd time the Young Street CSX bridge has been hit since 2000.

How does he know?

He's been keeping track. He has a navy-blue binder labeled "Young Street Bridge Data" with every accident report from the location.

Foels, who acts as the spokesman for the police department, used to work in records, and that's when he noticed the problem.

"On average, it happens maybe two or three times a year," he said.

Some years, there is a  spike.

Foels thinks drivers relying too much on GPS might be part of the problem.

Truck drivers often use specialized GPS software designed to reroute trucks away from roads that prohibit trucks or have restrictions on height or weight. But if they're using regular GPS, like the kind found on an iPhone, those kinds of restrictions aren't taken into consideration.

The bridge over Young Street is on the edge of an industrial part of the city and near Interstate 290. Foels said many of the drivers are just trying to get back to the highway when they crash into the bridge. Sometimes, the drivers are lost, Foels said, and they're so focused on listening to the GPS directions that they're not paying attention to road signs.

Even the yellow ones.

There's a theory out there that the accidents are caused by Canadian drivers who can't do the quick math to convert feet to meters (11 feet, 6 inches equals 3.5 meters, by the way). A quick look through Foels' folder turns up a handful of drivers with Canadian addresses.

But Cheryl Ackley Ward says that theory is nonsense.

"It has nothing to do with Canadians and metric system," Ward said. "It's all GPS."

She and her husband run Rad's Fine Automotive Center, a Young Street repair shop. Ward is often the first on the scene when a truck hits that bridge, and she always asks the shaken drivers what happened.

"First it was MapQuest and GPS," she said. "Now it's simply GPS."

The Wards have a surveillance camera that looks out on their lot, but it also happens to capture video of the collisions, including Tuesday's. She posts her surveillance cam footage on her Facebook page.

Over the years, Ward said, she's tried to get the city to do something to prevent the truck-vs.-bridge accidents.

The city had part of the road "declassified" as a truck route, Foels said. The police reached out to CSX officials, who said there's nothing they can do. Foels said he suggested putting flashing lights on the bridge, but CSX shot the idea down.

A CSX spokesman said in an emailed statement to The Buffalo News that "because Young Street is a public roadway, efforts to address this issue fall under the jurisdiction of local traffic authorities."

For Brian Kimmins, president of Buffalo Transport Co., there's no excuse for a truck driver hitting a bridge.

"First and foremost, read the posted height of the bridge," said Kimmins, who has been in the trucking industry for 43 years. It's the truck driver's responsibility to look for the sign on a bridge to see how high it is.

And if the driver isn't sure?

"The rule is," he said, "you slow down and if need be, you put your four-ways on and you get out and you look. You don't risk the integrity of the equipment or the people you share the road with."

There's an "acute shortage" of truck drivers in both the United States and Canada, Kimmins said, and that has led to some companies hiring inexperienced drivers. In some cases, the drivers can't read or understand English.

But when it comes down to it, Kimmins said, a professional truck driver should know to check the height of a bridge before going under it.

"This is not rocket science," he said. "Every bridge has a sign on it."

A tractor-trailer driven by Kirisanthan Senathi, 24, of Scarborough, Ont., crumpled after hitting a low railroad bridge over Young Street in the City of Tonawanda on May 30. (Photo courtesy City of Tonawanda police)