Subscribe for $1
Read Today's E-Edition
Share This
What to expect in next 36 hours: One more little shot of snow, lots and lots of wind
0 Comments
Share this
1 of 3

Al Antolin clears his car of snow Saturday, Nov. 19, 2022 in Buffalo, N.Y. Residents of northern New York state are digging out from a dangerous lake-effect snowstorm that had dropped nearly 6 feet of snow in some areas and caused three deaths. The Buffalo metro area was hit hard, with some areas south of the city receiving more than 5 feet by early Saturday. 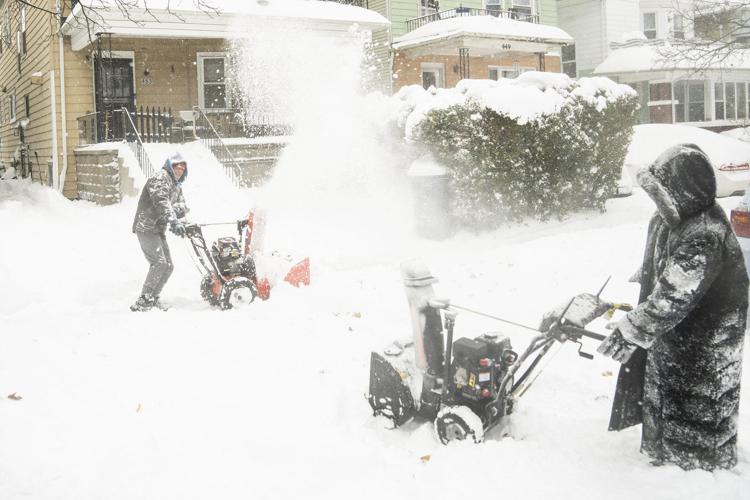 Neighbors Stephan Davis, left, and Star Haynes playfully spray one another with their snowblowers in the Elmwood neighborhood of Buffalo, Nov. 19, 2022. 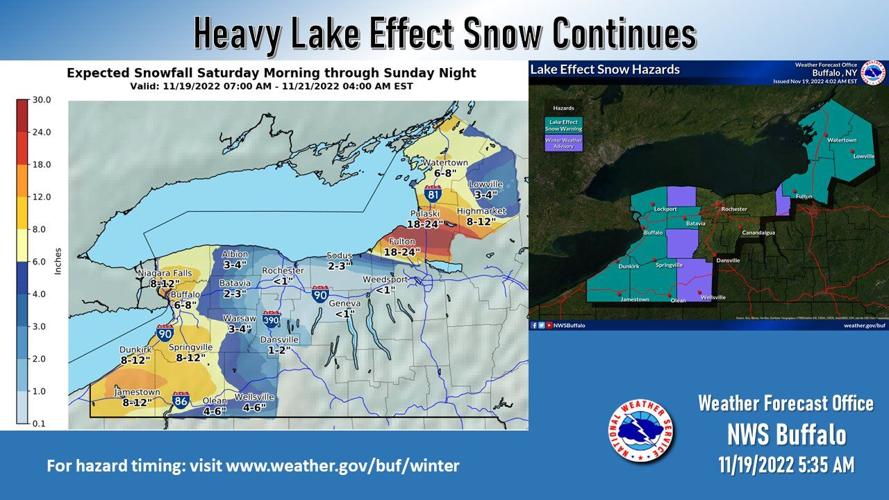 An "extreme" lake-effect storm that dumped 77 inches in Orchard Park has left the Buffalo metro area, but forecasters from the National Weather Service warn that blowing snow Sunday night and Monday could make travel difficult.

A final shot of snow is forecast Sunday night, according to the National Weather Service.

The bigger issue continues be the windy conditions, with strong gusts creating the potential for drifting and limited visibility while driving in flat areas. Tonight the lake-effect band will come across the region one more time, adding an inch of fluffy snow in the Buffalo metro area and several inches in persistent areas on the Southern Tier.

"It will be in such a weakened state that there won't be a ton of snowfall with it," Aaron Reynolds, a meteorologist at the National Weather Service in Buffalo,  said of any snow expected Sunday night.

And that's good news, given how hard areas already have been hit.

Orchard Park continues to dig out from a local high of 77 inches, while Hamburg's 73.7 and Blasdell's 65 followed. Parts of central and southern Erie County remain in a travel ban as county, state and even the National Guard crews continue the snow-clearing process.

At the Buffalo Niagara International Airport, Reynolds said this November is now the second snowiest November on record, coming in second to November 2014.

Elsewhere, the City of Buffalo has a traffic advisory except in South Buffalo, south of William Street, where the traffic ban still is in effect. Travel bans also remain in effect for the City of Lackawanna and the Towns of Evans, Hamburg and Orchard Park. Orchard Park Police announced Sunday evening that the town's traffic ban would end at midnight.

The rest of Erie County continues under a travel advisory. Motorists are advised to use caution. County Executive Mark Poloncarz said Sunday morning he hoped to have all streets and highways open again within 24 to 48 hours.

The Thruway is open to all traffic from Rochester to the Pennsylvania state line, but the Thruway Authority cautioned that some exits may be blocked due to snow removal. In a briefing Sunday morning, Erie County officials said Exits 56 and 57 remain closed on I-90. Route 400 reopened Sunday. The entire expressway section of Route 219 from the Thruway to Springville was still closed Sunday evening.

Here's how the weather is expected to play out through Tuesday:

A lake effect snow warning continues from Chautauqua and Cattaraugus counties until 10 p.m., with snow falling at the rate of 1 to 2 inches an hour in the heaviest squalls. Meanwhile, wind will continue to be a problem.

"West winds gusting as high as 45 mph will create areas of blowing and drifting snow," the Weather Service wrote in a 3:39 a.m. Sunday update.

A winter weather advisory elsewhere in the region expired at 7 p.m. Sunday.

The Buffalo area should see little accumulation during the day, but may get a final shot of snow Sunday night as winds shift again, bringing another 1 to 3 inches. Sunday night's temperatures will be in the mid- to upper 20s.

The arrival of warmer air will put an end to the lake effect and start melting down all this snow. There's a chance of rain and snow showers in the afternoon. It will be partly sunny and very windy, with a high in the upper 30s and gusts of up to 50 mph. A wind advisory for all of Western New York except Allegany County will be in effect from 9 a.m. to 7 p.m.

"It is going to warm up," Reynolds said of Monday and the early forecast for the rest of the week. "There will be some melting."

Erie County crews are continuing their snowfighting efforts in the hard-hit Southtowns, as the lake-effect storm moves northward on Saturday.

The three locations will be open until 6 p.m.

Late Friday afternoon, the Evans Center Volunteer Fire Company at 8298 Erie Road opened its doors to stranded motorists. Here are some of their stories.

Emergency services available during the snowstorm

Here's a list of emergency resources available to residents during the storm.

Buffalo grapples with up to 4 feet of accumulation; South Buffalo hauls snow, remains in travel ban

Much of Buffalo woke to 1 to 2 feet of snow Saturday morning, officials said, and a brief respite from severe weather allowed cleanup crews to maneuver before the storm's next wave was expected Saturday night.

About 150 National Guard members have been deployed to the Buffalo area to help respond to the storm, Gov. Kathy Hochul said.

On Nov. 17, 2014, we had no idea what we were in for: back-to-back lake-effect blasts that buried parts of Western New York under snowfall mea…

The snow starting falling in Buffalo on Thursday evening.

Snow on Transit Road as lake-effect snowstorm begins on Nov. 17, 2022.

Trucks on Thruway despite ban

Trucks are driving on the NYS Thruway despite a state-imposed ban on commercial trucks during the November 2022 lake-effect storm.

Trucks on Thruway despite ban

Big trucks driving on the New York State Thruway during the snowstorm despite Gov. Hochul's ban on commercial vehicles

Snow comes down on Thruway

Snow coming down in Amherst along the Thruway, at Transit Road, as lake-effect snowstorm begins on Nov. 17, 2022.

'There's nowhere to put the snow': In Lake View, a plow operator struggles to keep up

“No roads are plowed, and if they were, they’re covered again, which is making it terrible for us,” Matt Duggan said Friday morning as he drove to meet one of his plow drivers who was jammed in the snow.

Even for the winter-hardened residents of the Southtowns, Friday's snowstorm that dropped more than 4 feet in places left an impression – perhaps even exceeding the deluge of November 2014.

Erie County takes aim at travel ban violators: 'Do not be the reason an ambulance cannot get to the hospital'

Law enforcement officers wrote 300-plus tickets through Friday evening to drivers who violated travel bans during a lake-effect snowstorm that dropped 5 feet of snow in a day in some places.

Two die shoveling snow; those with cardiac risks advised to 'just let your driveway fill up with snow'

The lake-effect snowstorm turned deadly for a couple of men who died of heart attacks while clearing snow.

On Sunday, even as the building was due for demolition Monday, Braymiller Lane's owner Howard Braymiller started to feel a little more positive, vowing to rebuild the 80-year-old bowling alley.

Al Antolin clears his car of snow Saturday, Nov. 19, 2022 in Buffalo, N.Y. Residents of northern New York state are digging out from a dangerous lake-effect snowstorm that had dropped nearly 6 feet of snow in some areas and caused three deaths. The Buffalo metro area was hit hard, with some areas south of the city receiving more than 5 feet by early Saturday.

Neighbors Stephan Davis, left, and Star Haynes playfully spray one another with their snowblowers in the Elmwood neighborhood of Buffalo, Nov. 19, 2022.