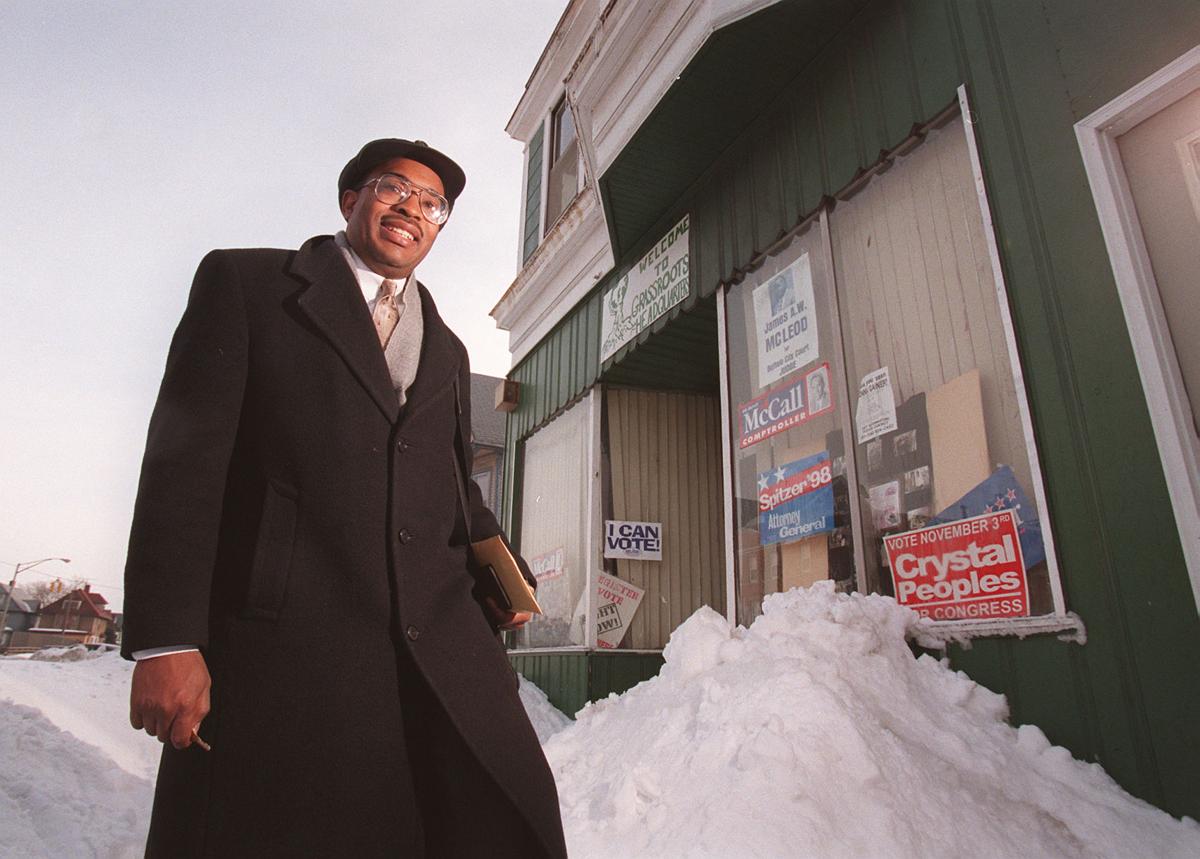 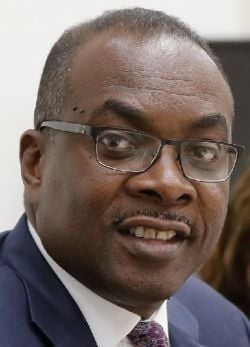 For over a decade, Buffalo's appointment on the Western Regional Off-Track Betting board of directors has belonged to a Garner.

Just months after taking office in 2006, Mayor Byron W. Brown appointed his friend Maurice L. Garner, founder of the Grassroots political club, as Buffalo's representative to the OTB board.

When Garner stepped down from the board seat after the 2014 season, Brown picked another Garner to fill the position: Garner's wife, Michelle Parmer-Garner. She's still on the board, even though she now lives in Cheektowaga.

The board member position pays a stipend up to $4,000 annually, but also offers directors health insurance valued today at upwards of $34,000 annually for a family plan. Garner received the family plan during his 8 1/2 years on the board, and Parmer-Garner continued the family insurance plan upon her appointment 4 1/2 years ago, according to the OTB corporation.

What's more, within three years of his leaving the OTB board, Garner's consulting firm had received $29,000 in no-bid professional contracts from OTB.

Brown and Maurice Garner, both 61, have been friends for more than three decades, long before the FBI began seizing documents from City Hall and investigating Garner's business activities.

The two go back to the early days of the Grassroots political organization, even before they began working in the late 1980s for former Erie County Executive Dennis T. Gorski.

It's a friendship that, at one point or another, has served each man well. Brown used Grassroots as his political springboard. Garner and organizations he's involved with benefited financially. In addition to the OTB insurance, Brown's campaign committee paid more than $70,000 over the past decade to a Garner business and to political and community organizations Garner helped found.

It's also a friendship that Brown isn't walking away from, despite the FBI's continued interest in Garner.

The FBI's interest in Garner dates back to at least 2017, when agents raided Garner's Buffalo home as well as the Grassroots office on Genesee Street, and the Urban Chamber of Commerce on Main Street, which Garner also founded. No arrests were made.

More recently, a few sources told The Buffalo News that federal agents questioned them about Garner in the days surrounding a Nov. 6 raid on City Hall, when the FBI seized two cartloads of documents from the Buffalo Urban Renewal Agency's housing division office.

"Hopefully this will be resolved in positive fashion," Brown said. "He is someone I believe has really made a major contribution to this community."

The mayor declined any further comment on his relationship with Garner or the ongoing FBI probe.

Garner said he has not done any business with the city, including BURA. Furthermore, he said, he is aware of only two projects he worked on in the past with companies that received federal funds through the city, and that work was done at least seven years ago.

Garner said whatever business success he has had is the result of his own reputation and abilities – and not because of his friendship with Brown or any other politicians he has supported.

"My strength is my ability to manage, to organize and working through problems," said Garner, who works as a lobbyist and management consultant, helping firms win community support – through community dialogue and discussions with stakeholders – for development projects planned for the African American community and East Side neighborhoods.

"I do a good job. I know the community. I have a good reputation. I have a track record," he said.

Garner does not believe he has done anything wrong, his attorney has said.

The Buffalo News attempted to identify recent contracts or payments Garner and his consulting firms, Garner Associates and Urban Vision for Tomorrow, received from local governments or political candidates.

The review identified the Western Regional Off-Track Betting Corp. as the only government-related board Garner has recently served on, and also from which he and his companies received contracts over the past five years.

In 2016, OTB hired Garner and his Urban Vision for Tomorrow as a consultant at $1,450 a month for 10 months, to help the agency develop marketing strategies to expand OTB's reach into Buffalo's inner-city communities. A similar consultant contract was approved in 2017. Prior to entering into the 2016 agreement, Garner notified the OTB agency that his wife was a board member.

"We had Maurice focused on helping us build relationships in the minority community, providing us his input on several sensitive public affairs issues and helping us with strategy regarding some legislature changes that were very important to us," said Western Regional OTB marketing director Ryan Hasenauer.

Garner said he developed a plan that would have expanded the OTB network into Buffalo businesses, such as bars and bowling alleys, but it was largely nixed because of conflicts with Buffalo Raceway.

When Brown first appointed him to the OTB board in 2006, "he mentioned to me that he thought I could do a good job," Garner said.

Garner said he enjoyed being an OTB director, and worked hard at it, dealing with marketing and construction expansion issues. But by the end of 2014, with his own work in Buffalo's African American community ramping up, Garner said he no longer had time to serve on the OTB board, which required trips to Batavia once or twice a month. His wife, however, had just retired from a 32-year career as a clerk in the state’s court system, and was interested in sitting on the OTB board, he said. Brown appointed her in June 2015.

"I was very busy. I couldn't make the meetings, and she had an interest in the issues, and she is retired," Garner said.

Garner said he and his wife each had health insurance through their jobs when he was first appointed to the OTB board so that was not a factor in his decision to serve. They nevertheless opted to take the OTB health insurance because it was better than their other available insurance, he said.

When Garner left the board, he said he no longer had employer-paid health insurance outside of OTB, but his wife was still eligible for insurance from her former job that could cover the whole family. When she took the OTB position, records show, the OTB insurance remained with the Garner family. The Garner policy is valued at $34,600 in 2019, according to OTB.

Garner said he was told when he decided to leave OTB that board members who serve at least 10 years are eligible for lifetime health insurance. Garner resigned anyway.

"It was never about the insurance," he said.

Garner's wife did not respond to requests for comment.

No payments from city

The Buffalo News filed a Freedom of Information request with BURA, asking for copies of any documents that mention Garner or his two consulting firms, Garner Associates and Urban Vision for Tomorrow.

The agency responded it has no records referencing Garner or his organizations.

It's not known, however, if documents the FBI removed from the BURA office have any references to Garner or his companies. The FBI declined comment.

The Buffalo News also reviewed three years of vendor reports detailing individuals and firms receiving payments from the City of Buffalo, the Buffalo Sewer Authority and the Buffalo Municipal Housing Authority. The News did not see any payments to Garner or his companies.

Similarly, neither Erie County government nor the Niagara Frontier Transportation Authority have made any payments to Garner or his companies, according to officials from both agencies.

Garner and his consulting firms have worked over the years for political candidates, including Brown.

Garner and his other firm, Garner Associates, received just over $47,000 from political candidates and organizations from 2005 to 2015. None of that came from Brown.

Garner also founded two political committees, including Grassroots, although he is no longer involved with the organization's leadership. Grassroots took in over $182,500 from 2012-2019, with Brown's campaign committee contributing almost $20,000, the reports show.

Garner helped establish the Be the Change political committee, which took in just over $60,000 from 2010 to 2016. More than half – $33,600 – came from Brown's political fundraising committee. Brown paid Be the Change to help with an “educational campaign” the mayor was conducting to let East Side residents know how Buffalo’s economic upswing affects them.

Similarly, Garner is credited with starting the Urban Chamber of Commerce, which received about $19,000 from political candidates and organizations from 2014-18, including $3,700 from Brown's campaign committee.

'Nose to the grindstone'

Over the years, based partly on the success of the Grassroots club, Garner's lobbying and consulting business branched out. At one point Garner was working for Bolton-St. Johns Inc., one of Albany's top lobbying firms. Today, he works primarily in the Buffalo area, doing work for private companies.

He says he's not looking to be in the spotlight, and doesn't solicit work. He takes assignments when contacted by individuals or firms familiar with his reputation, he said.

He just wants to quietly do his work, and continue helping Buffalo and its African American community, Garner said.

"I keep my nose to the grindstone," he said. "Everything I've done has been about what is best for the community."

Mayor Brown, planning chief tight-lipped on what FBI is investigating

“The FBI is trying to determine if there was any quid pro quo relationship between the donations to the mayor and Modern’s contracts with the city,” one source told The News. “They also want to know what dealings there were between the mayor, (Steve) Pigeon and Maurice Garner.”