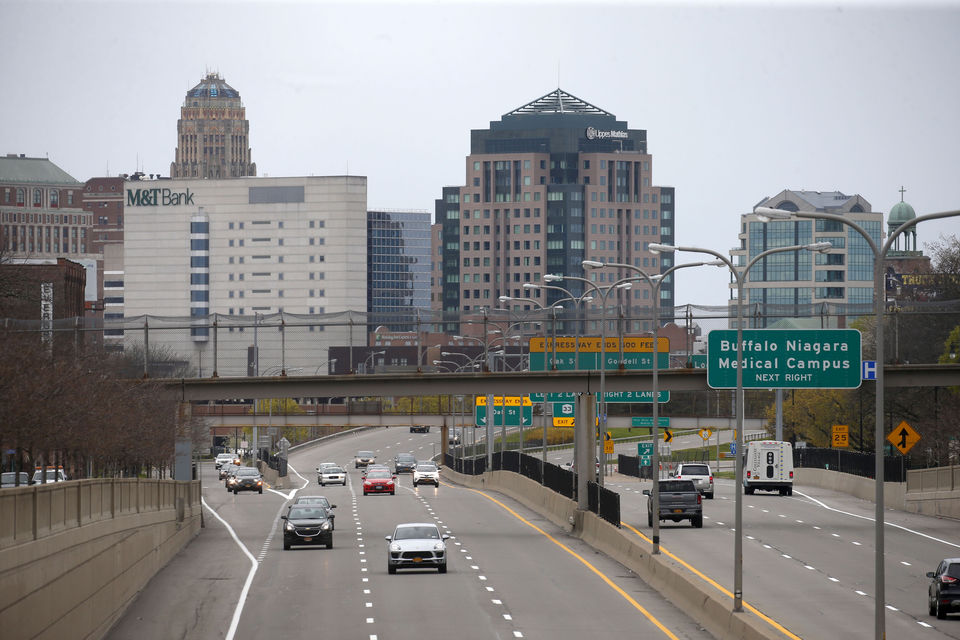 A view of Route 33 outbound as seen from the Jefferson Avenue bridge in Buffalo during rush hour on Thursday, May 14. (Robert Kirkham/Buffalo News) 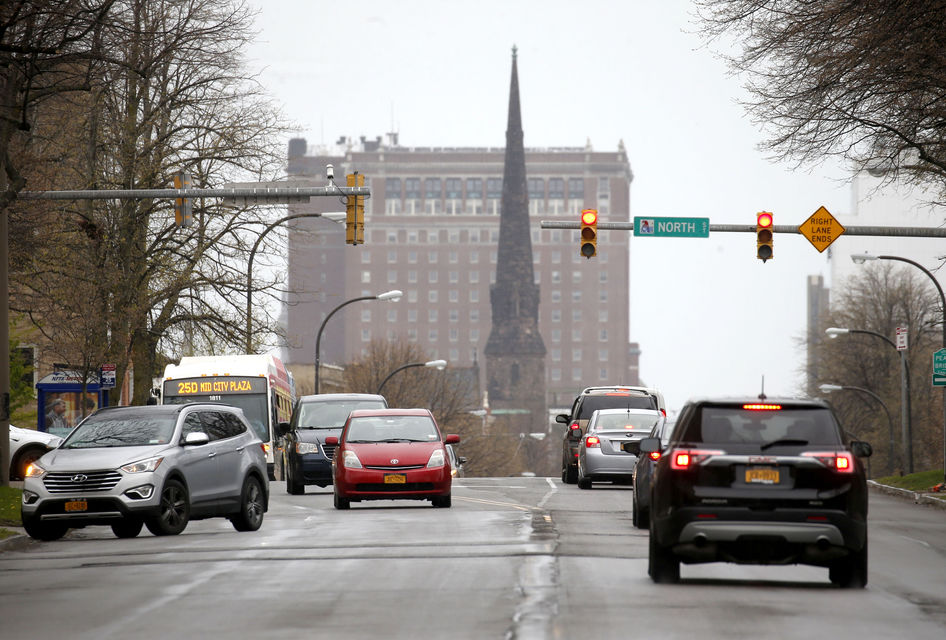 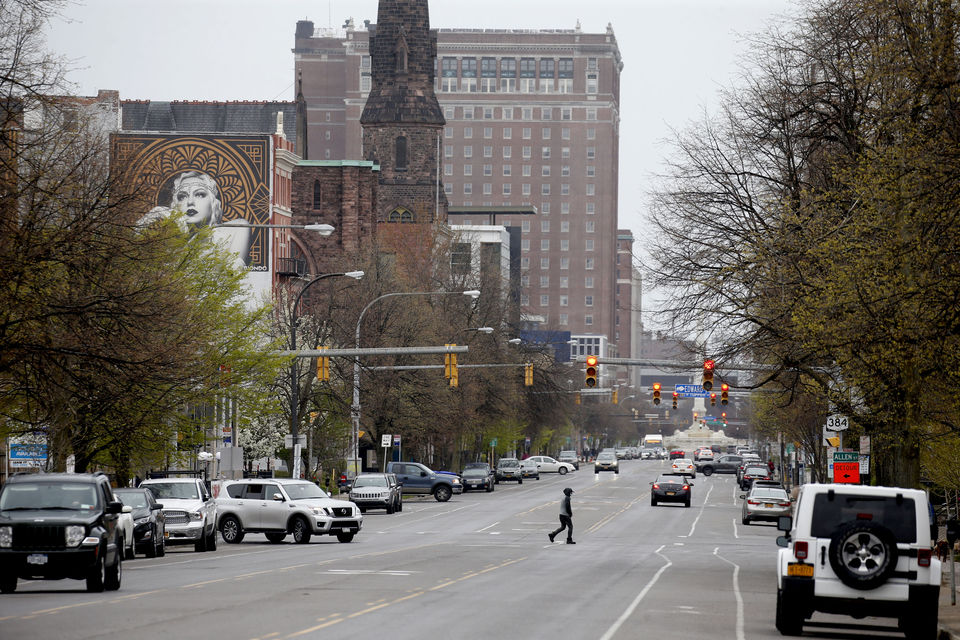 ALBANY – Nothing like a clear, open road to make some people want to push the accelerator, and push it again.

With the Covid pandemic, any motorist knows they’ve been treated since mid-March to near-empty streets and highways around New York and the nation.

And, as any motorist has seen firsthand, some fellow drivers on the road have had a simple response: Speed limits be damned.

Throughout the nation, police and traffic safety groups have warned that too many motorists – prodded by the lure of speed or they are just paying less attention to their driving in these worrisome times without packed streets and highways – have grown bigger lead feet since the Covid pandemic appeared.

With traffic volume down, ticket writing by police agencies has dramatically plummeted.

“We’re seeing a significant increase in high-speed tickets,’’ said Adam H. Rosenblum, whose firm, Rosenblum Law, has offices in several cities, including Buffalo, and specializes in traffic law defense work. (New York State motor vehicle officials would not, or could not, confirm the claim.)

“In the Buffalo area, people are normally sort of more cautious because the roads are more clogged. Now, we have a more open-road scenario,’’ Rosenblum said of an increase his lawyers are seeing in the Buffalo area of motorists being charged with exceeding posted speed limits by 20 mph, 30 mph or more. In some areas, road racing tickets have been issued, he said.

There is data for all of this, courtesy of smartphone location services and even automobiles that tech companies can tap into.

On some Buffalo-area roads, the average speed has jumped 30% during some rush-hour periods from pre-Covid. Same, too, downstate. And Miami. And Texas. And England. And Germany.

Some area roads and highways are seeing faster speeds, some about the same, according to an analysis of speed volumes performed for The Buffalo News by two West Coast-based traffic data analytics companies. They process billions of pieces of information each month from cellphone and automobile and truck records to provide real-time insights into driving speeds and volumes across the United States and elsewhere.

In some cases, traffic speeds on Western New York highways have changed little from pre-Covid days. Is it because Buffalo-area drivers are more law-abiding? One explanation may be more reasonable: Buffalo’s highways, despite what some frustrated commuters might believe, are far less congested than other mid-size and large urban areas that have seen more dramatic speed hikes by drivers.

On I-90 from the Buffalo suburbs to the Pennsylvania border, the average speed of drivers between the end of April and the first week of May hovered just above 60 mph, about the same as a one-week comparison period in February before Covid and state-ordered lockdowns kept many workers at home and off the roads, according to INRIX, a Seattle-area traffic analytics company that gets its real-time traffic data from a number of sources, including driver’s smartphone location features and some vehicles themselves; its clients include automakers and transportation agencies around the world.

Inbound on Route 33, from its intersection with I-90 to Goodell Street, there’s been an increase of a few miles per hour, on average faster, during the Covid-19 shutdown, according to Inrix’s data run.

The exception: Between the hours of 7 and 8 a.m. Pre-Covid, that stretch of the Kensington road saw drivers averaging about 48 mph. During Covid, from April 26 through May 2, drivers were averaging about 62 mph – a 29% increase.

On Delaware Avenue, between North Buffalo and downtown, the average speed during the pandemic has been several miles per hour higher. But at around 8 a.m. in February, drivers on average were going about 17 mph; during the Covid period examined, the average speed rose about 35%, the INRIX data shows.

The bump in speed has been far more dramatic in some cities better known for traffic jam nightmares. For instance, the average speed on the Interstate 405 freeway in Los Angeles during its evening rush hour in the last week of February dipped down to just over 20 mph, according to data INRIX supplied The News. The speed averaged about 70 mph during the late April and early May period, when Covid dramatically cleared the roadways.

Covid has had an assortment of impacts on driving and drivers – and on vehicle maintenance.

In the City of Buffalo, for instance, the number of vehicular accidents is down 59% since March 20, compared to Jan. 1 through March 19, police say.

“There are a lot less cars on the streets. People just aren’t going to work … There’s just a lot less opportunity to be involved in motor vehicle accidents,’’ said Joseph Gramaglia, deputy commissioner of the Buffalo Police Department.

As for speeders taking advantage of the clear lanes and streets, he said Buffalo police are not “seeing anything egregious,’’ though he acknowledged he did not have any specific data yet on whether city police have been issuing tickets for higher speed violations during the pandemic.

Something else unusual is going on. The American Automobile Association club that represents the regions of Western and Central New York, saw service calls for vehicle battery problems up 47% in April compared with a year ago; in the first couple weeks of May, they rose 53%.

Elizabeth Carey, a spokeswoman for AAA, said people staying home has led many to keep their cars parked and unused – causing some batteries to drain, especially during colder nights.

Covid’s effects are vividly being felt by the state Thruway Authority, which has seen toll revenues drop. The agency’s board was told in a meeting last week that traffic on the toll road was off 48% between March and early May.

On the Thruway’s Erie section, which runs from Buffalo to the Pennsylvania line, overall traffic is down 44% since the Covid pandemic appeared compared to the same period a year ago, according to Jennifer Givner, a Thruway spokeswoman.

Traffic at the Grand Island Bridge was off an average of 46.5% on the southbound and northbound lanes, the agency said.

At one point in April, overall passenger vehicle traffic volume in the Buffalo area was down an average of 56%, according to Inrix, the traffic tracking firm. With talk of the economy slowly reopening, the traffic in the last couple of weeks has started to slowly tick up.

Speed up, speeding tickets down

The key reason: fewer vehicles on the road.

Another lesser reason, according to a former trooper: Some police officers in state and local agencies – especially in the early weeks of the virus’ outbreak when personal protective equipment was not widely available – were reluctant to pull drivers over for minor infractions out of concerns about exposing both police and a vehicle’s occupants to the virus.

The State Police has had some high-profile speeding incidents, like the man recently pulled over in an Audi S8 on the Palisades Parkway in Rockland County for traveling – in the middle of the afternoon on a Tuesday – 142 mph.

The State Police also recently dispatched additional troopers to I-190 in Buffalo after reports of aggressive drivers on the rise since the Covid pandemic.

The Governors Highway Safety Association recently reported a “severe spike” in speeding in many states during Covid. It urged people to slow down, in part, to keep hospital rooms from becoming further strained in some areas.

One example from the traffic safety group: New York City. There, on March 27 with streets all but empty, automated speed cameras issued 24,765 tickets – almost double the level from 30 days prior.

A second traffic data company that last week crunched traffic numbers for The Buffalo News is StreetLight Data, a San Francisco-based company that uses data to track everything from transportation impact on climate change to where municipalities should best place vehicle electric charging stations.

Like the Inrix data, the company was given particular roadways with start and end points. StreetLight Data found, for instance:

• The average motorist speed during peak morning drive times on I-190 between the U.S. and Canadian border to I-90 in Erie County was up 13% to 60 mph from March 15 to March 31, compared to the same period a year ago.

• Morning speeds on Transit Road between Greiner Road and Route 33 were up 13% to 36 mph in March compared to March 2019. They rose dramatically higher – 29% – in the evening rush-hour periods.

Carey, the AAA spokeswoman, said the motor club reminds drivers to obey speed limits. “Initially, social distancing meant less vehicles on the roads and motorists may have been tempted to take advantage of open roads and exceed the speed limit,’’ she said.

“Now, as weather warms up and cabin fever sets in, we are seeing an influx in the number of vehicles on the road, confirmed by an increase in road service calls on warm, springlike days compared to cold, winterlike days,’’ she added.

Duffy, the State Police official, said there have been some “isolated issues with excessive speeding.’’ But, he said: “While lower traffic volumes may present the opportunity for speeding, troopers continue on their regular patrols and anyone who attempts to drive in a reckless manner will be held accountable.’’

The State Police did not have available information on the average speeding ticket issued since Covid compared with last year. The agency referred a reporter to the state Department of Motor Vehicles. The DMV, after several inquiries over recent weeks, did not supply any specific information about speeding in New York State.

Asked if he had a message to motorists who might use the clearer roadways to hit the accelerator, Gramaglia, the Buffalo police official, said: “We’re still out there.’’

Erie County executive: 'We are trying to avoid a shutdown'

Erie County officials said without further changes in behavior, the number of people hospitalized in Western New York for the virus could more than triple by late January.

A view of Route 33 outbound as seen from the Jefferson Avenue bridge in Buffalo during rush hour on Thursday, May 14. (Robert Kirkham/Buffalo News)