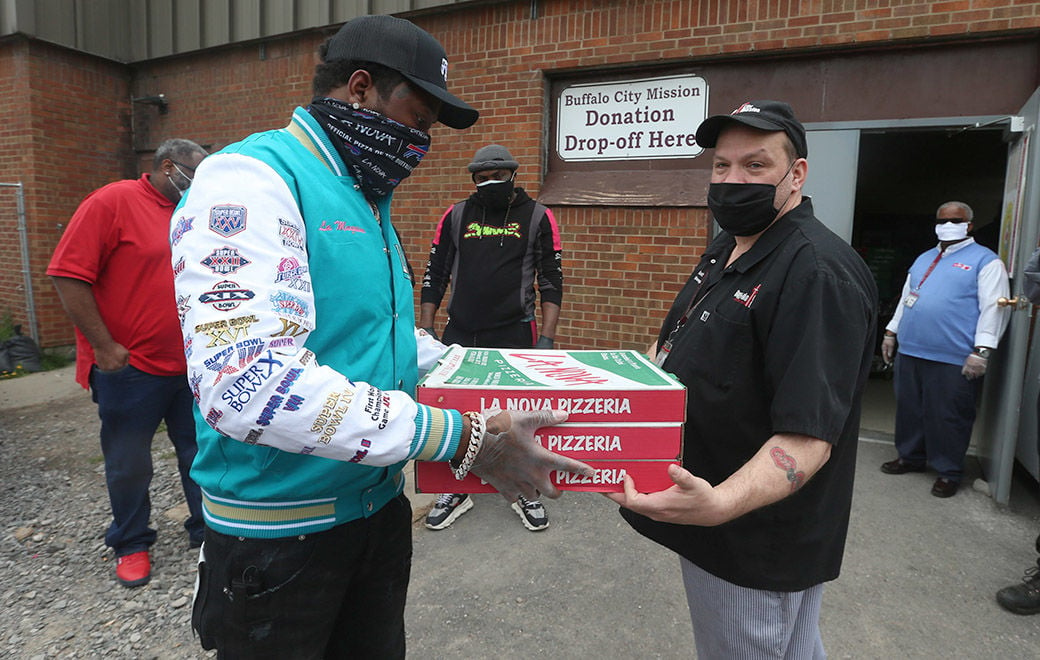 Rapper Conway the Machine, left, of Griselda Records, hands off pizzas to Matt Brown, kitchen manager at Buffalo City Mission. The musician was helping to unload 11 sheet pizzas and 11 buckets of wings he provided to the City Mission as a way to give back to his community. (John Hickey/Buffalo News) 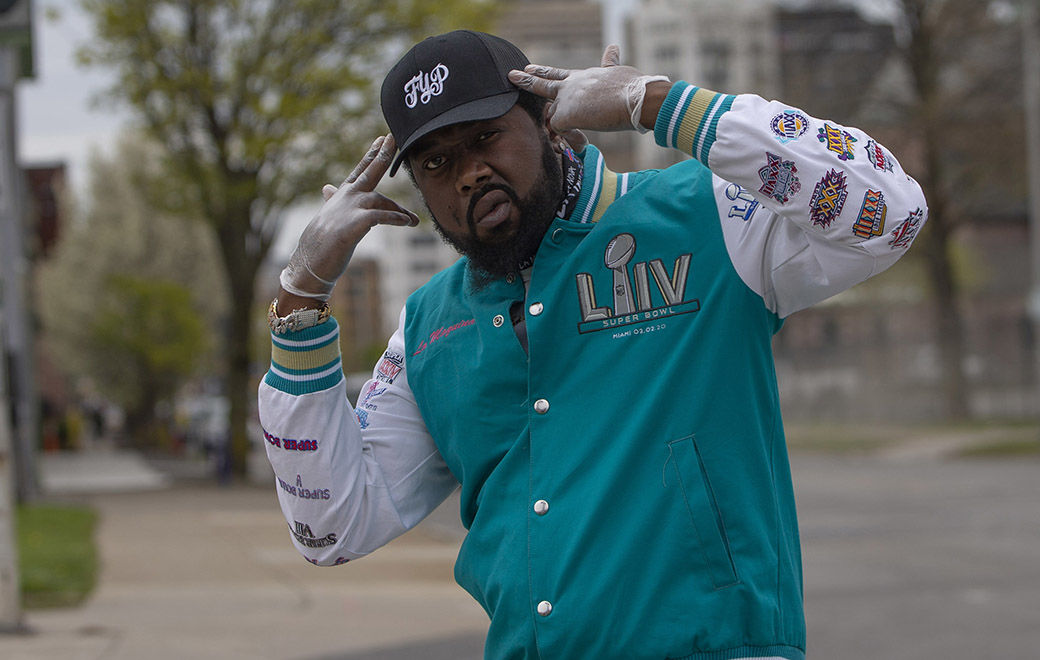 Griselda Records rapper Conway the Machine of Buffalo stands outside the Buffalo City Mission on Thursday where he donated about 500 lunches with pizza and wings from LaNova Pizzeria. (John Hickey/Buffalo News)

He’s widely regarded as one of the top lyricists in the game, a key component in what is quite likely the most viscerally exciting movement in hip-hop since Kendrick Lamar broke out of the underground and into the mainstream.

But on Thursday, the rapper known as Conway the Machine was once again Demond Price, a now-grown kid from the streets of Buffalo who made it out of some tough situations and was eager to support the community that had bolstered him by partnering with La Nova Pizzeria to help the Buffalo City Mission.

Conway and his crew assembled at 100 East Tupper St. to offer what they call “Buffalo’s signature entrees” to clients of the City Mission, in-need families in the neighborhood and essential workers from the community.

“I wanted to do something for the homeless,” Conway said. “The men’s homeless shelter and the women’s as well. We’re keeping it local with La Nova and we’re coming out to make sure everybody’s got plenty of pizza and wings."

The City Mission delivery kicked off two days of events that will find the rapper visiting NFTA workers on Friday to gift them with coffee, doughnuts and bagels. Conway will also visit Alanna Bell of Amherst, who recently contracted Bell's Palsy, resulting in temporary facial paralysis. Bell has turned her 11th birthday into a drive-by party that will act as a food drive for FeedMore WNY. Conway, who also has Bell's Palsy, will donate to the cause.

"The people who work at the City Mission are on the front lines trying to help the less fortunate every day. The bus drivers, too – these people can’t work from home, they’ve got to be out there.

“I just want people to know they haven’t been forgotten,” Conway said during a phone conversation, as he also reflected on an 18-month period that had seen Griselda Records – a crew of like-minded Buffalo hip-hop artists launched in 2014 by his younger brother and creative partner, Westside Gunn – grow into a globe-spanning sensation, including being signed to Eminem’s Shady Records imprint in 2017.

"We just want to put a smile on everybody’s face, when they need it the most, you know? I just felt compelled to do this, with everything going on with Covid-19 especially, to let these people who have always been struggling know that they’re not being overlooked or forgotten," Conway said.

Conway is no stranger to struggle. In 2012, he was shot in the neck and the back of the head during an altercation in Buffalo, and though he miraculously survived, he was left with Bell's Palsy, the right side of his face paralyzed.

The violence of the grittiest Buffalo streets worked its way into Conway’s art, lending a biting verisimilitude to his raps, an element underscored by the dark, stark and grainy minimalism that is a hallmark of the production values represented on all Griselda Records offerings.

Blending the influence of New York City’s “boom-bap” movement, the film noir aspects of the most incisive ‘90s hip-hop and the gruff lessons learned growing up the hard way in Buffalo, Conway, Westside Gunn, their cousin, Benny the Butcher, and the rest of the Griselda gang caught the attention of a hip-hop press and fan-base weary of a scene growing stagnant and hungry for something fresh.

The praise for their efforts was often effusive. Witness this 2017 piece published by Stereogum, which hailed the Griselda crew's "feverish and ferocious" raps that make Buffalo "sound like some undiscovered sixth borough of NYC." Last month, Conway released his latest effort, a collaboration with producer The Alchemist, dubbed "LULU."

Watch Now: Seniors struggle to get the vaccine

Watch Now: Seniors struggle to get the vaccine

An Erie County Sheriff’s Office jail deputy resigned from his job in 2019, hours after federal agents investigating the Buffalo Mafia executed a search warrant at his residence, according to four law enforcement sources.

The Buffalo News recently published an account of an argument between a Cheektowaga police officer and his sergeant outside a bar that led to the officer's firing. Video obtained by The News shows what happened that night.

Vaccine shortages could be nothing but a memory soon

"I think the vaccine logjam is really going to break into March and April, and we'll really be rolling," said Dr. Thomas Russo, chief of infectious diseases at UB's Jacobs School of Medicine and Biomedical Sciences.

"It's a remarkable scenario to get to this complicated of a transaction and have all the parts start to fill in," Amherst Supervisor Brian J. Kulpa said Wednesday.

Rapper Conway the Machine, left, of Griselda Records, hands off pizzas to Matt Brown, kitchen manager at Buffalo City Mission. The musician was helping to unload 11 sheet pizzas and 11 buckets of wings he provided to the City Mission as a way to give back to his community. (John Hickey/Buffalo News)

Griselda Records rapper Conway the Machine of Buffalo stands outside the Buffalo City Mission on Thursday where he donated about 500 lunches with pizza and wings from LaNova Pizzeria. (John Hickey/Buffalo News)