Olympics live: Simone Biles on the beam, Men's basketball and the latest results from Tokyo

Watch now: Downtown protest turns violent; state of emergency declared
0 comments
Share this
Support this work for $1 a month
1 of 5 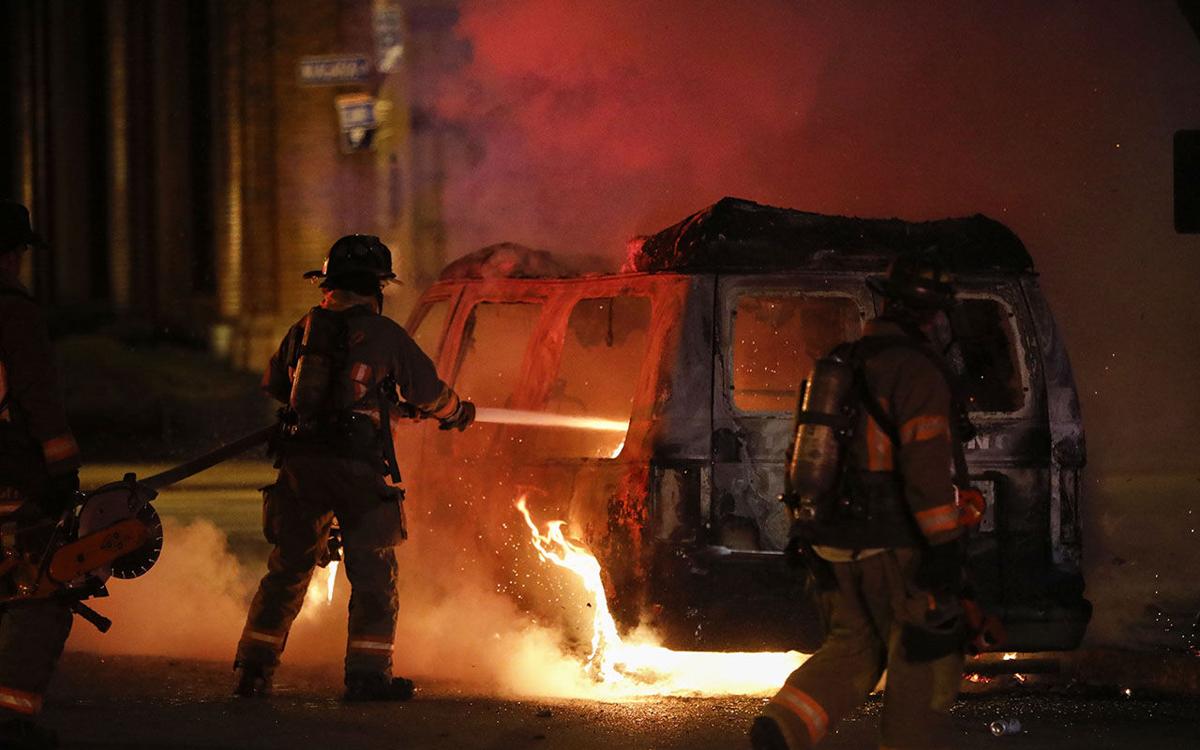 Buffalo firefighters extinguish a bail bondsman's van that was torched by protestors in Niagara Square, Saturday, May 30, 2020. (Derek Gee/Buffalo News) 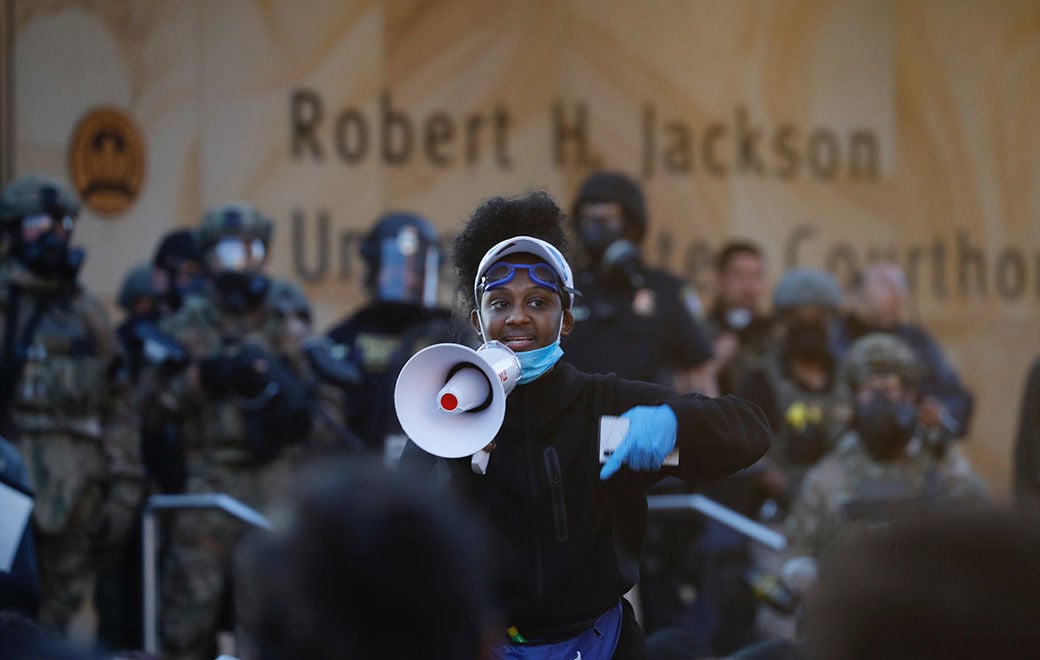 A protestor with a megaphone talks to the crowd. (Derek Gee/Buffalo News) 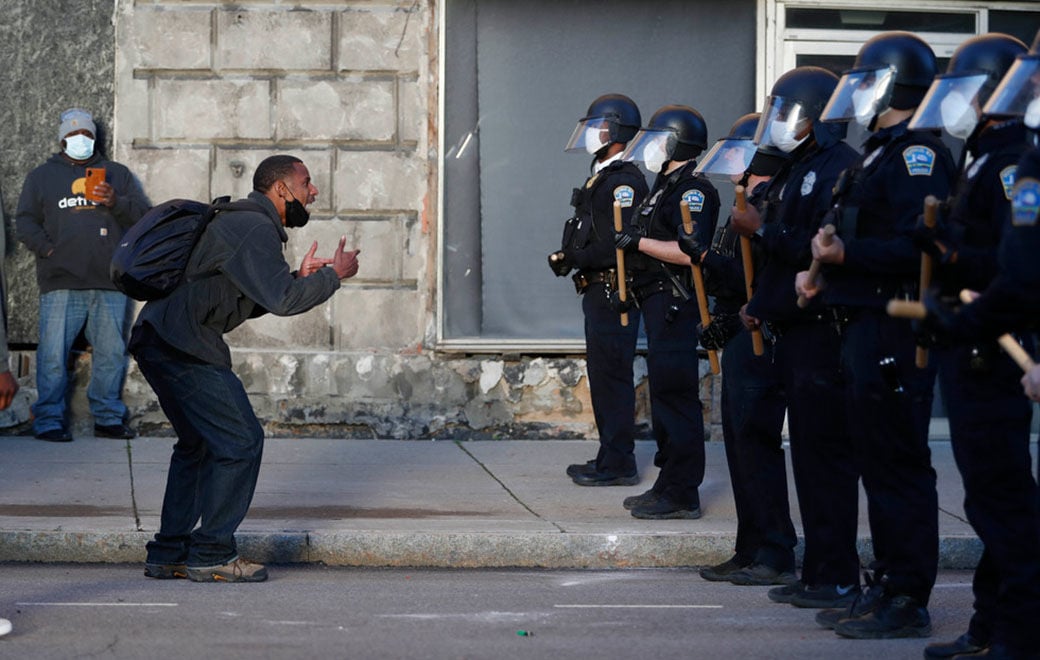 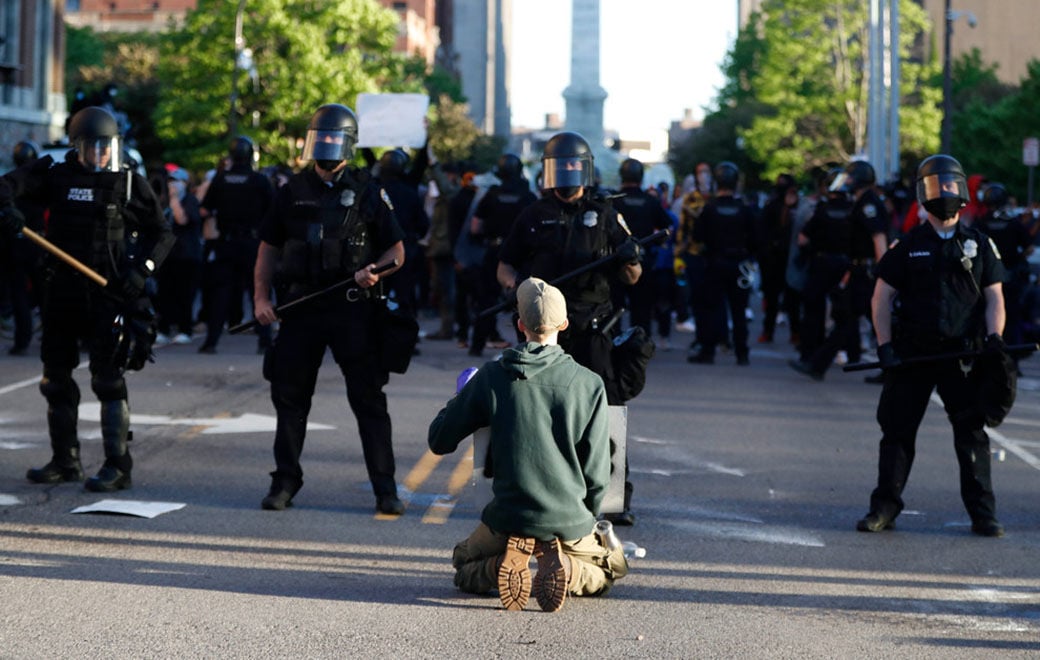 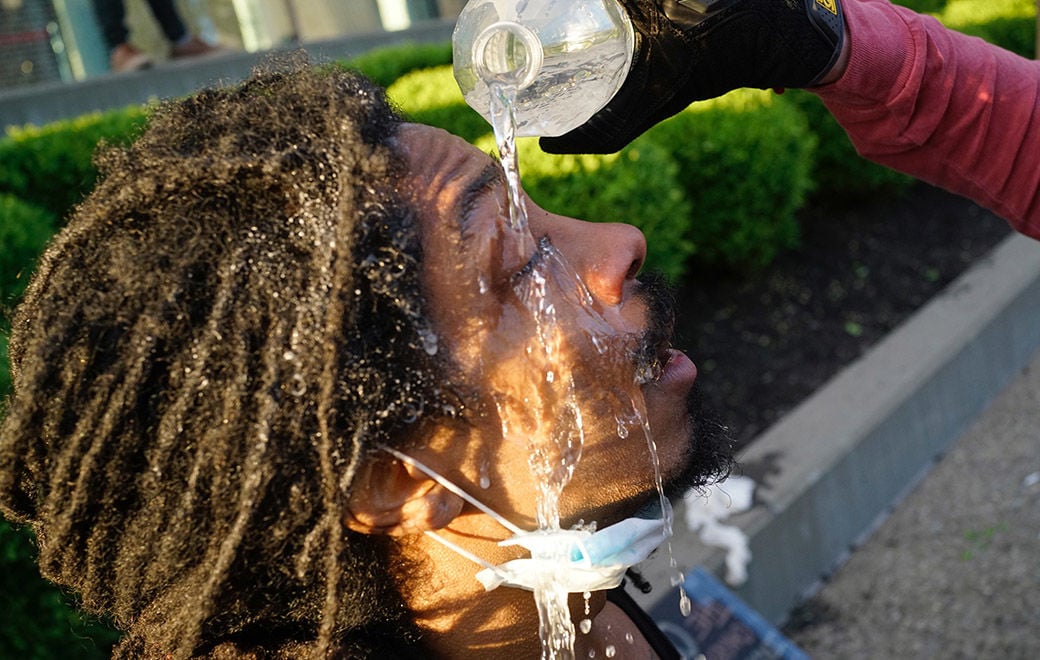 Demonstrators joining in nationwide protests against police brutality occupied Niagara Square late Saturday afternoon and staged a confrontation with armed U.S. marshals and Buffalo police in riot gear at the entrance to the federal courthouse before spreading to other neighborhoods late into the night.

Several hundred from the diverse crowd of demonstrators, part of a crowd of nearly 1,500 who had been expressing anger at the death of a black man at the hands of a white police officer in Minneapolis, began filing en masse up Niagara Street after police ordered them to leave Niagara Square at 8:30 p.m.

Many in the crowd in front of the courthouse chanted, “I can’t breathe,” and “I’m gonna die,” the last words of George Floyd said before he died as a Minneapolis police officer knelt on his neck.

Two hours later, Erie County Executive Mark Poloncarz declared a state of emergency and implemented a 10:30 p.m. curfew after reports of smashed windows and other vandalism in neighborhoods throughout the city.

Despite the curfew, a stream of demonstrators returned to Niagara Square after 10:30 p.m., where a mobile bail bond truck was burned, police fired tear gas and vandals sprayed graffiti on City Hall.

Shortly before 11:30 p.m., a TV news broadcast showed a man throwing a flaming object through a window of City Hall. Flames visible inside the building were quickly extinguished.

Mayor Byron W. Brown blamed the violence on outside agitators.

"This was incited by people who don't live in this community," Brown said.

Buffalo Police Capt. Jeff Rinaldo said seven people were arrested in the aftermath of the protest that started peacefully in Niagara Square on Saturday afternoon but later turned chaotic and violent as some protesters spread throughout the city. Rinaldo said he expected about seven more arrests were pending.

During the standoff near the federal courthouse, one witness said, a motorist who drove through the crowd on Delaware Avenue was dragged from her vehicle. The windows of her vehicle were smashed and she was taken away in an ambulance, she said.

The protest in Buffalo took place against a backdrop of demonstrations across the country after the death of a Floyd, a 46-year-old Minneapolis man, during a violent arrest in which an officer pressed him into the pavement with his knee on Floyd’s neck.

Video showed Floyd, who was black, complaining that he couldn’t breathe as a white officer, Derek Chauvin, held him down for nearly nine minutes. Chauvin, who was later fired, was charged with third-degree murder and second-degree manslaughter on Friday.

The march in Buffalo, largely organized through Facebook, drew hundreds of people into Niagara Square. Similar protests took place across the state, including in Rochester, where the Monroe County executive implemented a curfew after some breakaway protesters set a police car on fire.

Tensions are really high now. Some in the crowd destroyed a car and police are now around it #GeorgeFloydProtests #Buffalo pic.twitter.com/skukN9dmMo

In Buffalo, many protesters appeared to demonstrate peacefully in the early evening hours, at times shouting down unruly demonstrators. Many in the crowd sought to de-escalate the situation when it turned tense. Protesters throughout Niagara Square took a knee several times.

“I’m saddened and I am outraged that every time I turn on the news another brown person is murdered without reason,” said Sarita Rivera, who came with her daughter. “I’m tired of it and I don’t want to see it any more, so I’m here with everyone in solidarity. I just want it to stop.”

Several in the crowd reported that they had been tear gassed as they exited the square.

When police blocked the crowd marching on Niagara Street, it continued onto side streets on the West Side. By 9:30 p.m., still several hundred strong, it had reached Niagara and West Ferry Street, then proceeded to Grant Street.

The protest had begun quietly between 4 and 5 p.m. as a diverse group of protesters, most wearing protective face masks and carrying homemade signs, filled the square in front of Buffalo City Hall.

They marched up Delaware Avenue to North Street, chanting “No justice, no peace.” Passing cars honked horns in support as more people with signs joined the procession.

They circled to Elmwood Avenue in a light rain, then returned to gather around the McKinley Monument as bright sunshine returned.

“It’s really unfortunate that we have to be in this situation at all,” said protester James McDonnell, a resident of Buffalo’s West Side. “There is a separate police system for black people in the United States and we’re here because we’re aware of that and don’t want anyone else to get hurt.”

Back in Niagara Square, attention turned to the federal courthouse, where about a dozen armed U.S. Marshals in camouflage uniforms stood, guarding the entrance.

The terrace around the courthouse quickly filled with protesters, who shoved against the officers, shouted obscenities and chanted, “I can’t breathe,” and “I’m gonna die.”

Erie County Executive Mark Poloncarz said on Twitter that officials had “reason to believe” that the Robert H. Jackson United States Courthouse would be targeted.

“The vast majority of protesters were there for a peaceful purpose,” Poloncarz wrote at about 8:45 p.m., “but as I stated earlier, we had reason to believe not all did.”

Tensions turned high. Bottles were thrown and there was booing, while others urged everyone to be peaceful.

When some in the crowd suffered eye irritation, apparently from pepper spray, volunteers ran to them and splashed milk in their faces to soothe the pain. Others rushed to apply a makeshift splint for a man who apparently broke his leg. He was taken away in an ambulance.

When someone smashed a plate glass window on the Delaware Avenue side of Statler City, others admonished him.

“Stop it,” one of them said. “Why would you hurt your city?”

Buffalo police in riot gear, brandished batons and formed a cordon across Delaware Avenue. As dusk fell, a woman’s voice on a loudspeaker told the demonstrators they had two minutes to clear Niagara Square.

“If you do not leave, you will be subject to physical removal and arrest,” she said.

Here is what police said over loudspeaker. There is a line of police on Delaware ave with dogs. Police vehicles starting to surround the area. pic.twitter.com/d9l3IURI4n

As the demonstration marched up into the West Side, there was scattered vandalism, primarily broken windows on storefronts. Police took a stand against remnants of the march at Grant Street and Auburn Avenue.

Many in the crowd at Niagara Square expressed deep concern about social ills and the many deaths of black people in custody of police.

“When we took a knee, no one died,” said Jean Banks of Buffalo as she sat near the McKinley Monument in Niagara Square with her daughter, Kiara Ross-Mack. “We are here to protest against police brutality. We want our government to acknowledge it and make changes.”

Jason Watkins of Buffalo, on furlough from his job at the Salvation Army since March, said he did not think the demonstration would have much effect.

“They’ve got to start with the president,” he said.

Mayor Byron Brown, in a prerecorded video message posted before the protest in Niagara Square, urged people to peacefully demonstrate and raised the possibility that some who came to protest would be agitators from outside the Buffalo community.

“I know the pain that it caused and I know that people are hurting right now, that people want to express that hurt, they want to express that outrage and peaceful protest is the vehicle for being able to do that,” Brown said in the message aired early Saturday afternoon. “Protest is the way to say that the discrimination and racism that black people have faced in this country for so many years needs to come to an end.”

Reward offered in assault on officer at Niagara Square protest

Crime Stoppers Western New York on Wednesday announced a reward of up to $2,500 for information leading to the arrest or indictment of those responsible for the assault.

Buffalo firefighters extinguish a bail bondsman's van that was torched by protestors in Niagara Square, Saturday, May 30, 2020. (Derek Gee/Buffalo News)

A protestor with a megaphone talks to the crowd. (Derek Gee/Buffalo News)