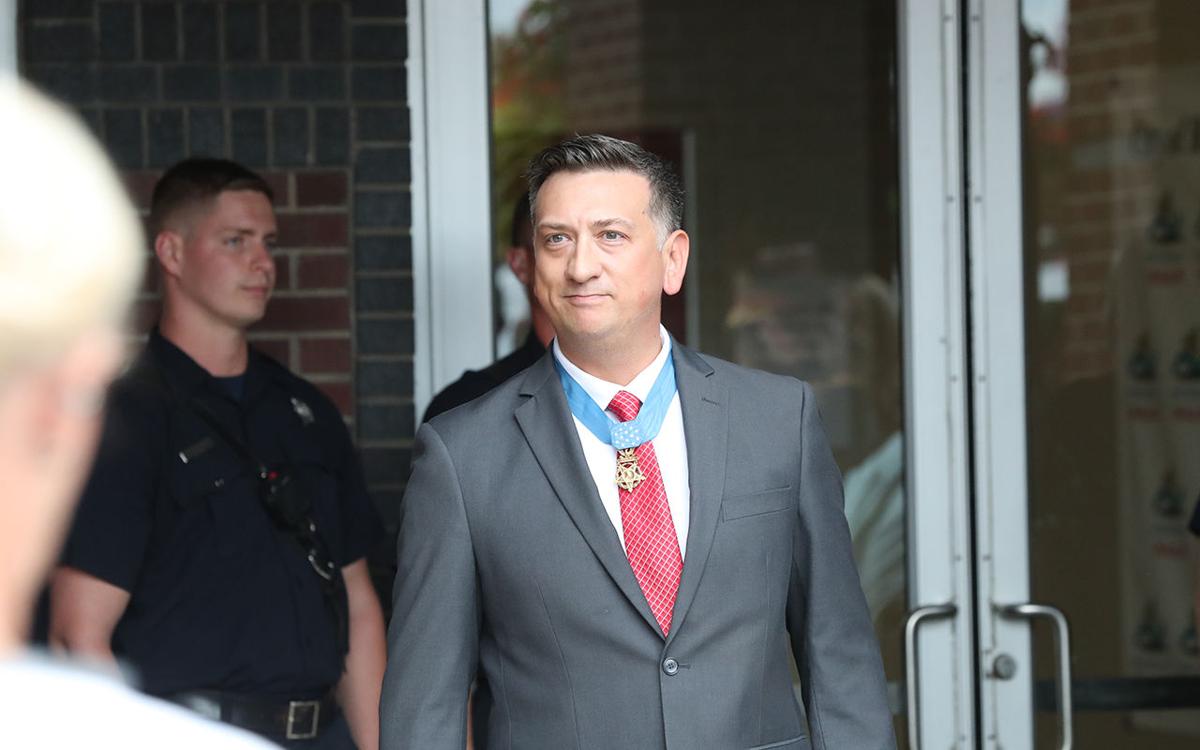 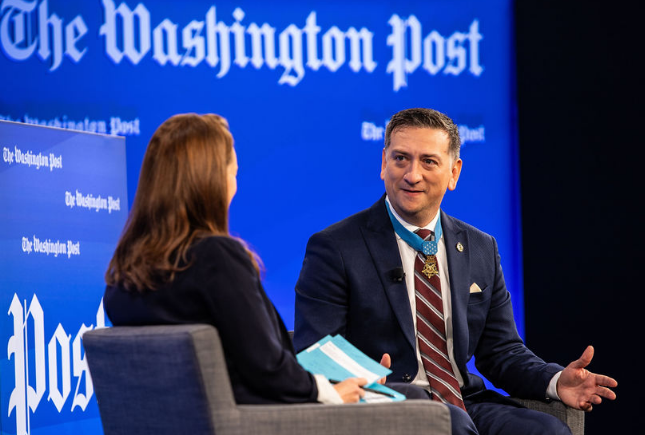 WASHINGTON – David Bellavia took to the stage of a Washington Post auditorium Wednesday with his Medal of Honor draped around his neck. And over the next half-hour, in the latest stop on his long tour as an evangelist for the U.S. Army, he demystified and humanized the making of a war hero.

He told of the fear he felt nearly 15 years earlier, when he thought he had been shot in one of the Iraq War's most heated battles. He told of the nervousness he felt as President Trump draped the nation's highest honor around his neck. And above all, he spoke of the Army as a repository for all that's best about America, a spectacularly diverse institution of individuals bonded together by love of their country and willing to fight to their death to protect it.

"I found love on the battlefield, and it blew me away," he said. "War is horrible. ... You've all seen movies or experienced it yourself, and that's obvious. But there's love."

That love, he said, is born of hard experience that unites men and women from all corners of a fractious country.

"We're all different," he said. "We all vote different. We love different. We worship different. We don't agree on anything, and we're like every other cross section of America, but we put all of our differences aside. And if you're willing to be there with me, I don't care anything about where you're from, or who you are. You are my blood. I'm going to bring you home."

Bellavia, the Western New Yorker who in June became the first living Iraq War veteran to receive the Medal of Honor, served as the headline attraction at a Washington Post Live Q&A on veterans in America.

He began by taking the audience back to Nov. 10, 2014, when he was an Army sergeant leading a unit tasked with clearing insurgents from a house in Fallujah, Iraq.

"We were well-prepared for close-quarter combat," he said. "You're opening the doors to the OK Corral, and it's psychologically debilitating. And you have to get into those young people's heads and remind them: 'I've got you. We're going to do this together.' "

In the end, Bellavia ended up clearing that house of insurgents all on his own, shooting several of them and saving his comrades from almost certain death.

"You're going room to room, door to door," even though you're too tired to see well and deafened by the gunshots all around, he said.

At times, Bellavia said, he relied on his sense of smell to figure out where the insurgents were. At other times, he found clues – an orange cup on a table or a piece of cheese on a plate – that signaled danger lurking.

"You were just in a primal state of evaluating threat," he said. "Where could a person hide, where can a person be, and how do I get to them before they get to us?"

Bullets ricocheted off the house's concrete walls the whole time.

"At one point I thought it was hit," he said. "And I was like: 'I can handle this. It isn't that bad. I thought being shot was gonna be horrible and I can do it. Oh my God, I have so much confidence.' And then I saw it was like a piece of wood in my arm. And I was like, 'Oh no! If I can't handle this, this is going to be a long day!'"

In the end, Bellavia handled it. And afterward, he received the Silver Star, the nation's second-highest military honor.

More than a decade later, after the Obama administration conducted a review of past medal winners, Bellavia got a call saying he had been nominated for the Medal of Honor.

For Bellavia, that led to another tension-wracked day – at the White House.

"You're nervous. You're freaking out," Bellavia said of his mood before the ceremony. "I made the mistake of putting a tobacco product in my mouth – during the ceremony. And that is a no-no. It was like, just don't spit on the floor."

The crowd in the White House East Room looked on at Bellavia, thinking he was about to get emotional.

"I was actually trying not to swallow dip juice," Bellavia said.

The real emotional moment came minutes later, when Bellavia asked President Trump if his comrades from Fallujah could join him on stage.

"I don't think he knew there's 32 of them," Bellavia said. "It's as if a clown car opened up and the whole stage fills up with my guys. And in that moment, we were young again. We were together again. And it was the most beautiful experience of my life."

Ever since then, Bellavia has been sharing that experience with as many people as he can.

"I want as many people to see this thing as possible so that it's not foreign," he said of the medal draped from his neck. "And the other thing is: we're just trying to normalize service and say, you know, we do this because you're worth it. And we do this because we love."

The men and women of the U.S. military love America, to be specific. And Bellavia has been spreading that love on behalf of the Army for months now.

A conservative Republican, he refused to run for the congressional vacancy in New York's 27th District because he wanted to keep serving the Army, and he's been doing that in myriad ways. He's giving speeches. He threw out the first pitch at a Washington Nationals playoff game. He even went to rodeos.

"I just had a BMX biker jump over my head yesterday," he noted.

All along the way, he's carried a message to young people: The Army can make the most of you. And in doing so, he's found surprising moments of unity in a divided country.

"I go to New York and I enter Gay Pride Week in New York," he recalled. "And I'm literally standing in my uniform in the middle of Gay Pride Week and I'm thinking, you know, I don't know what's going to happen here. You know, everyone said thank you. Everyone hugged me, shook my hand."

Radio insiders expected the Medal of Honor recipient to replace Beach, who announced last week that he would be retiring.