Subscribe for $1
Read Today's E-Edition
Share This
'Undoing a more than 60-year inequity': Kensington Expressway project called a victory for the community
0 Comments
Share this
Support this work for $1 a month
Mark Sommer

A review process leading to a plan to reconnect predominantly Black neighborhoods on the East Side and restore Humboldt Parkway by covering a portion of the Kensington Expressway will be done faster than usual, Rep. Brian Higgins said Friday.

The Federal Highway Administration has agreed to fast-track the federally required environmental review Gov. Kathy Hochul initiated in January, the congressman said. That sets a goal to complete the study quicker than the three and even four years it typically takes to produce a plan for major transportation projects.

One idea offered by Majority Leader Crystal Peoples-Stokes is to put a deck over the portion of the highway between Best and East Ferry streets, with a scrubbing system to filter the air.

Hochul last month announced $1 billion in federal and state funds would be used for the project.

The extraordinary flow of state dollars to the East Side is exciting and long overdue, said Monica Pellegrino Faix, executive director of the Central Terminal Restoration Corp.

The state has set aside $30 million to pay for the state Department of Transportation-led study, with a public meeting expected as soon as next month.

Community leaders and politicians gathered Friday to bask in the glow of the announcement, including Peoples-Stokes, Higgins, State Sen. Tim Kennedy and Mayor Byron Brown.

"As the elected officials, we expect them to bring home the bacon, right? They brought home the bacon, the grits, the eggs – and all the rest of it," said Stephanie Geter, president of Restore Our Community Coalition.

The organization began trying to convince lawmakers a dozen years ago to address the lingering hurt caused by the expressway.

Geter said she was still trying to get her head around what the $1 billion investment will mean in disinvested East Side neighborhoods.

"When you think of this investment in a community that everyone walked away from, this is a big deal," Geter said. "It's not just the money, but what it will start to trigger in the hearts and minds of the people who live here."

"This is seen rightly by many as a way to correct past injustices for communities of color that primarily reside in the neighborhoods the highway has severed," Peoples-Stokes said. "We are eliminating barriers that will be a significant step toward reunifying neighborhoods in our city and healing decades-old wounds."

Peoples-Stokes, who has championed this project for years, said the investment will offer "transformational opportunities."

"Have you ever seen a billion dollars invested in an area where Black people live?" she said.

"I'm very proud that the community was heard finally, and they are going to see decades of advocacy realized in a project not only in their lifetime but in this decade," Kennedy said. "We're going to see shovels in the ground in the next couple of years, and I can't wait to see that day happen."

Higgins, who helped deliver federal infrastructure dollars for the Kensington project, noted that other U.S. cities are also planning to use the funds to right historic wrongs.

"This idea of building an expressway that obliterated neighborhoods is a national problem, but it's no more acute than it is here in Buffalo," Higgins said.

He said Frederick Law Olmsted built a park system with six parks along with seven parkways "because those parks, unless they were accessible to all, didn't have the highest and best benefit to a community. So this community was denied, as Olmsted used to say, the healing power of parks – the abundance of sunshine, the abundance of fresh air."

The announcement to restore Humboldt Parkway during Olmsted's 200th anniversary "was by far the most incredible birthday present ever," said Stephanie Crockatt, executive director of the Buffalo Olmsted Parks Conservancy.

The mayor said that for the community to fully benefit, housing and employment opportunities need to occur.

"We want to make sure the people who live around the Kensington Expressway benefit from the damage that was done when the expressway was installed," Brown said. "That is what this is all about – undoing a more than 60-year inequity that damaged a community, that damaged a people, and restoring the community that was damaged."

The press event was held in front of the north facade of the Buffalo Museum of Science, where repair work to restore the once grand stairs, just like the once grand parkway, is expected to begin in the near future.

The Editorial Board: Covering the Kensington will reunite a torn community, but the ultimate goal must be bigger.

The project must be both an acknowledgement of past mistakes and an engine of lasting economic improvement, especially for the communities harmed.

Members of the community will have a chance to say what they think of the transformation of the Kensington Expressway at two scoping sessions June 30 in the Buffalo Museum of Science.

The estimated $1 billion Kensington Expressway tunnel and related roadwork would be one of the most complex projects the state Department of Transportation has ever undertaken – but the likely plan is less ambitious than Gov. Kathy Hochul has at times indicated when discussing the project.

"There are so many things you could do around the city," one resident said. "This won't do anything for the City of Buffalo but put a Band-Aid over it."

"The imagery shows a moat that now exists in the neighborhood, and then shows the beauty that once was," said wheatpaste artist Max Collins, who created the mural. "I'm trying to give context to what the loss was."

East Side office opens for Kensington project: Public feedback 'crucial to its success'

A community outreach office opened today on the East Side for the Kensington Expressway project, raising the project's public profile and giving residents more chances to offer feedback.

Earlier this year Gov. Kathy Hochul endorsed a proposal for decking the portion of Route 33 that runs through the East Side between Best and E…

The plan endorsed by the governor – which she mentioned at the State of the State address earlier this month – would deck the portion of the highway between Best and East Ferry streets, creating a tunnel for traffic.

Restoring a stretch of Humboldt Parkway with a deck over the Kensington Expressway is no longer a long shot. Now, it is a New York State priority. 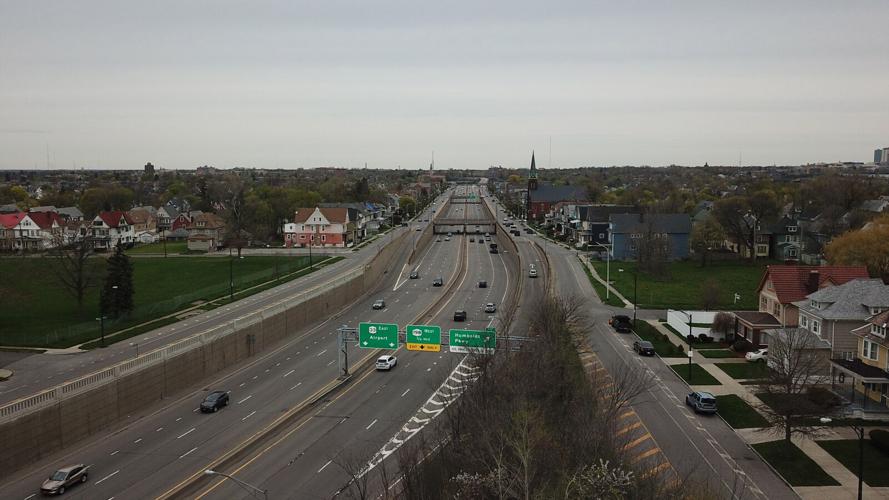 Kensington Expressway looking North from city showing the tunnel area with Route 198 at Top, in Buffalo, Friday, May 6, 2022. 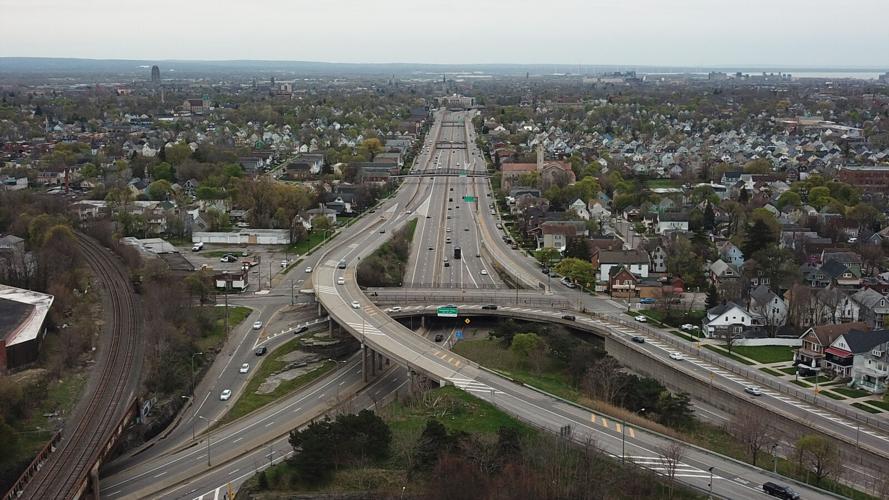 Kensington Expressway looking south toward city showing the tunnel area with Route 198 ramps at bottom in Buffalo, Friday, May 6, 2022.