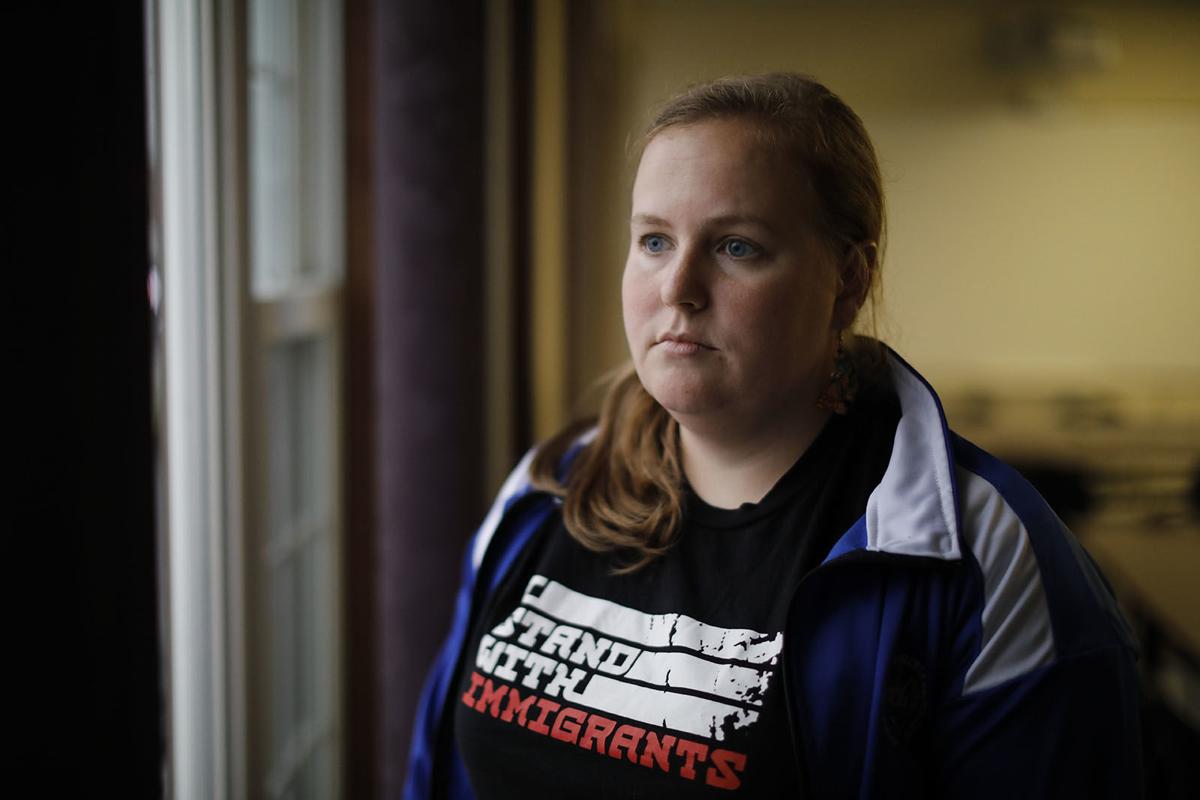 "Under Obama, there were priorities," says Meghan Maloney de Zaldivar of the New York Immigration Coalition. "Under Trump, anyone and everyone is a priority." (Derek Gee/Buffalo News) 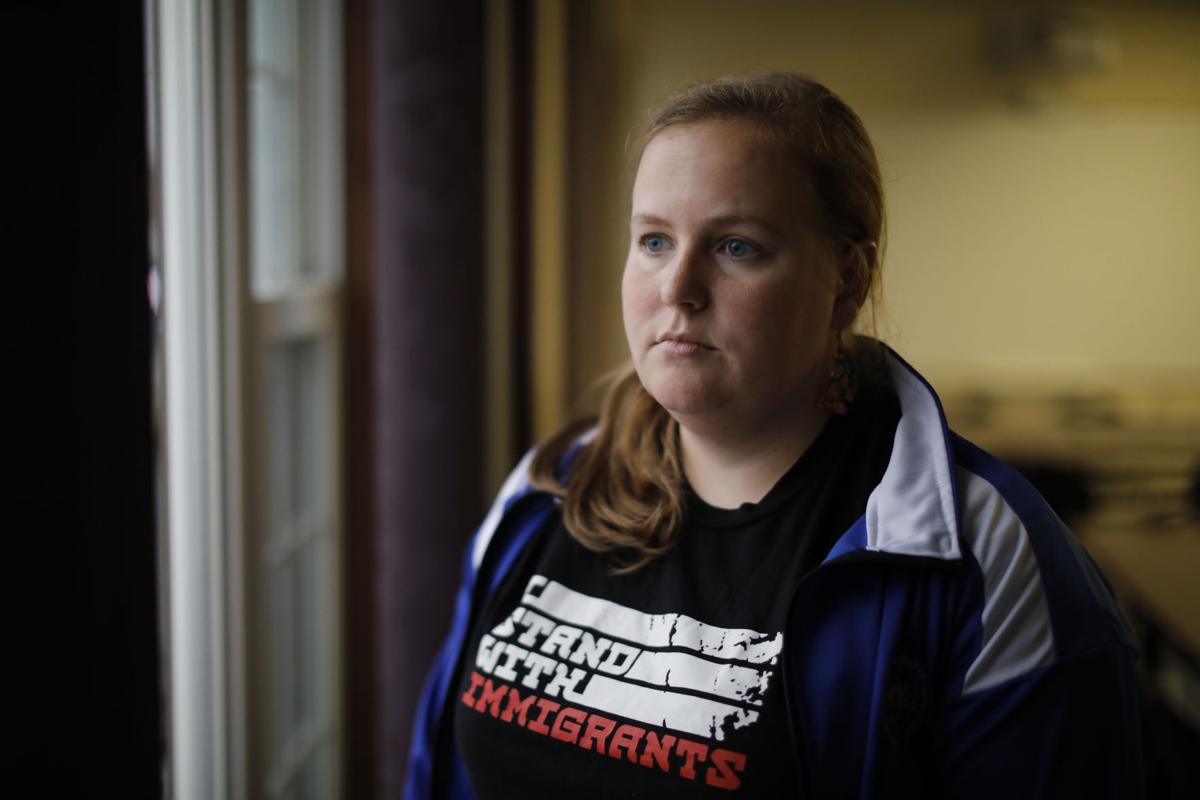 When President Trump promised to take the shackles off ICE agents, no one knew for sure if it meant more knocks at the door for Buffalo's undocumented immigrants.

In the three years since Trump was elected, deportation proceedings in the region's two immigration courts have increased 45%, according to data compiled by Syracuse University.

Who are the people being deported?

Fewer than 5% are criminals, the group Trump promised to target, according to the data.

The data from Syracuse University shows that, in President Obama's last year, the immigration courts in Buffalo and Batavia handled 2,025 new deportation proceedings.

"Under Obama, there were priorities," says Meghan Maloney de Zaldivar of the New York Immigration Coalition. "Under Trump, anyone and everyone is a priority."

Immigration lawyers say the surge in arrests and deportations is the result of Trump doing away with the "prosecutorial discretion" that Obama adopted his last few years in office.

Lawyers and immigration advocates also point to other factors, including the willingness by local police agencies to cooperate and the huge federal enforcement presence in Western New York.

As a border community, Buffalo is home to several U.S. Border Patrol offices, as well as Immigration and Customs Enforcement and the Federal Detention Facility in Batavia.

"We have so much more enforcement than a lot of larger cities," said Maloney de Zaldivar.

For years, undocumented immigrants were seen as living in the shadows, fearing detection, wondering if they'll wake up to federal agents knocking at their door.

But here in Buffalo, there also was a community of undocumented immigrants living openly, working in stores and restaurants, paying taxes and even serving in the military.

Those people were well-known to immigration authorities but, over the years, were deemed low-priority deportation cases.

Under Trump, that is changing.

Maloney de Zaldivar says the stepped-up enforcement has led to more and more arrests within the community, sometimes while people are working or shopping.

"People are often targeted while carrying out their basic daily activities," she said.

An immigration advocacy group studied those kind of "at-large" arrests and found that, under Trump, they increased 124% in Western New York, the second highest increase in the nation. Only Philadelphia saw a larger increase.

The study by the American Immigration Council found at-large arrests across the region jumped from 240 in Obama's last year in office to 537 in Trump's first year.

"The fact is, ICE is going into communities and arresting people," said Guillermo Cantor, the council's research director.

Maloney de Zaldivar told the story of a local man, a father of three children, who was picked up at his workplace and is now headed for deportation, leaving his wife and kids behind.

"She had to tell her children, fresh off the school bus, that their father wouldn't be coming home because he was in jail for trying to provide for them," she said.

ICE wouldn't comment on the American Immigration Council study but provided its own statistics on enforcement in the 48-county region that includes Western New York.

The agency says it arrested 1,582 undocumented immigrants across upstate last year, and that 80% of those individuals had a prior criminal conviction or came into ICE custody because of an arrest on pending criminal charges.

In contrast, data from the Transactional Records Access Clearinghouse, a data gathering organization at Syracuse University, found that fewer than 5% of those facing deportation had a criminal conviction.

"The Buffalo Field Office’s robust enforcement programs are focused at making upstate New York communities safe from dangerous criminal aliens and those that look to exploit our nation’s immigration laws," Thomas Feeley, director of ICE Enforcement and Removal Operations in Buffalo, said in a prepared statement.

Feeley added that, "the staff of the Buffalo Field Office works tirelessly to ensure that upstate communities don’t become a safe haven for criminals."

Immigration lawyers are quick to remind people that Obama is still remembered as the president who deported more people than all other presidents combined.

"The last two years, taken in a vacuum, look very favorable," Matthew L. Kolken, a Buffalo immigration attorney, said of Obama. "But in the first several years, his removal numbers were unprecedented."

Kolken said he isn't surprised at all by the increase in arrests here, and he pointed to the feds' practice of patrolling local train and bus stations in search of undocumented immigrants, a practice Obama eventually dropped.

"If they're resuming those type of enforcement efforts, that would explain the increase," he said.

Maloney de Zaldivar said the public also should be aware that Trump's stepped-up enforcement is affecting people who are documented immigrants but have allowed their status to lapse or have some other problem with their documentation.

"When it comes to enforcement, it's not just undocumented immigrants," she said.

The size of the undocumented immigrant community in Buffalo is difficult to measure, but the Fiscal Policy Institute, a New York-based think tank, estimated the number at more than 5,000 as part of an analysis on immigrants likely to apply for driver's licenses in New York State.

The group cited data from the Center for Migration Studies of New York and other organizations that track undocumented immigrants.

"There were 10 ejections, and I believe almost every one of them was related to someone who wasn't wearing a mask," Poloncarz said at a Covid-19 briefing.

"Under Obama, there were priorities," says Meghan Maloney de Zaldivar of the New York Immigration Coalition. "Under Trump, anyone and everyone is a priority." (Derek Gee/Buffalo News)