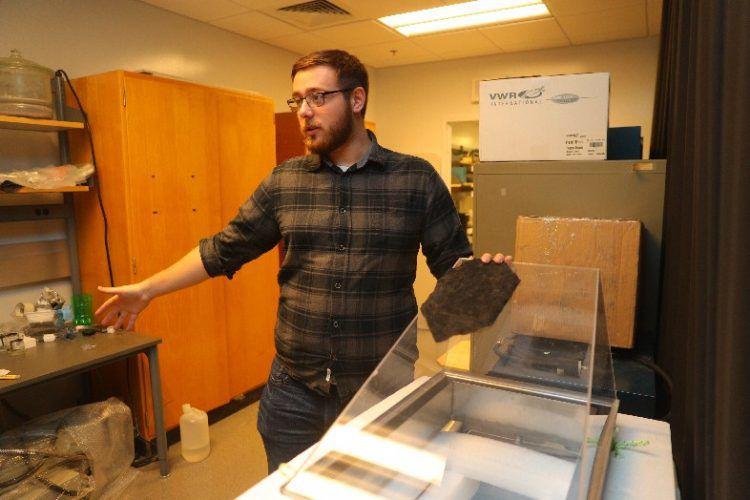 Matt Singer of Sunny Clean Water talks about the University at Buffalo startup in a lab at Davis Hall on UB's North Campus in Amherst, (John Hickey/Buffalo News) 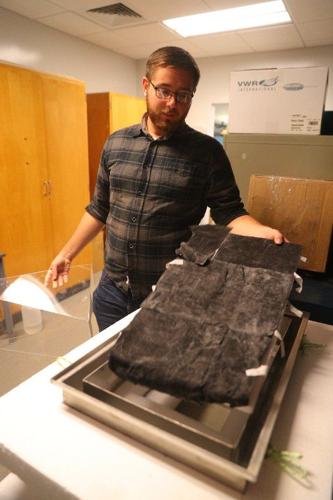 Now, a University at Buffalo startup has found a quick way to do it --  and it could transform how potable water gets to people in developing countries or in areas stricken by natural disasters like earthquakes or hurricanes.

The university’s Sunny Clean Water startup said its method is nearly three times as fast as the industry standard.

The process uses a floating solar still and a specially-engineered carbon-based cloth to capture, desalinate and purify as much as a liter of water every three hours in a prototype developed by UB associate professor of electrical engineering Qiaoqiang Gan, Singer and other university electrical engineering students.

NEXUS-NY is a clean energy seed accelerator funded by the New York State Energy Research and Development Authority with help locally from National Grid. It helps put clean energy researchers across the state in contact with entrepreneurs and others who can help with funding and customer support.

“The reality is if you look at the amount of research that takes place at universities across the United States ... very infrequently do these inventions make it to the marketplace,” said Doug Buerkle, the executive director of NEXUS-NY. “We work to solve that challenge.”

Sunny Clean Water’s unit was developed by UB's electrical engineers but it doesn’t use any electricity. It relies on the sun for its power.

Here’s how it works:

The floating still is placed in a river or pond. The special carbon cloth absorbs moisture and becomes saturated.

Then, heated by sunlight penetrating an angled acrylic housing placed over the cloth, the water condenses.

It leaves behind bacteria, viruses, other impurities and salt. The distilled condensation then runs off at an angle into a rectangular reservoir beneath the still.

That now-clean water can then be transferred into water bottles or drums.

The speed which makes Sunny Clean Water’s process unique comes from its ability to accelerate the heating process with its carbon cloth.

“We speed up the process,” Singer said. “That’s what our research is all about now.”

The cloth, which is turned from white to black when treated with its newly-developed nano-carbon material, helps absorb more heat inside the still, accelerating the speed of the process.

When NEXUS-NY identified Sunny Clean Water as a potential business-creating opportunity, UB researchers parlayed about $60,000 in state and federal funding to ramp up its development efforts.

It’s just the type of story NEXUS-NY envisioned when it was founded four years ago.

Sunny Clean Water is a good example of what can happen with a little boost, Buerkle said.

“These young companies need the adequate resources before they die,” he said.

Sunny Clean Water is now working with a Chinese company to mass produce its invention. Singer hopes production will be underway by this time next year.

Singer said the salt mining industry is already taking an interest in Sunny Clean Water because of its ability to speed up the process of solar-power evaporation and desalinization. The company is attracting interest from mine operators in Utah, Chile and Argentina.

The company hopes to work with non-governmental organizations to introduce its products into underdeveloped areas of the world, where clean drinking water is scarce, Singer said. It expects to begin those efforts in the Philippines.

Developers envision their solar still could also be valuable – even life saving – in places raked by natural disasters like Puerto Rico, where many remain without potable water in the wake of last month’s Hurricane Maria.

“It’s definitely enough for one person in a day,” Singer said. “One person can stay hydrated indefinitely with this.”

The fight goes on: Man wins another court decision in battle with Orchard Park over a Tim Hortons

Ray Miranda filed a site plan in 2013 for a single-story retail building for a Tim Hortons restaurant with a drive-thru window on nearly an acre of land at the corner of Chestnut Ridge (Route 277) and Armor Duells roads.

Bicyclist killed, two others injured after car strikes them near casino in Buffalo

A bicyclist was killed and two others were seriously injured when a driver of a car crashed into them as they were biking on South Park Avenue near the Seneca Buffalo Creek Casino Friday night, police said.

Is the stately, century-old mansion in Eggertsville owned by Scott and Lisa Friedman historically significant? The Amherst Historic Preservation Commission thought it was, a finding that for two months blocked the Friedmans from tearing down a dilapidated garage on the LeBrun Road property and building a replacement as part of an addition.

The money includes $36.5 million for housing and social services. She said more than 1,000 homeowners struggling to keep their houses in good shape will receive about $10,000 each in grants to fix their homes.

Two former Williamsville mayors scored landslide victories Tuesday to claim seats on the Village Board in a special election that was seen as a referendum on the controversial policies and statements of Mayor Deb Rogers.

Woman with four children in her vehicle charged under Leandra's Law

A Jamestown woman with four children in her vehicle was charged Sunday under Leandra’s Law with driving while her ability was impaired by drugs, State Police in Jamestown reported.

Man missing in Town of Boston found dead in his vehicle

The body of a man reported missing last week has been found in his vehicle off Shero Road in the Town of Boston, Erie County Sheriff John C. Garcia reported.

The 716 area code, popularized in recent years as an emblem of regional solidarity, is running out of numbers and unlikely to be issued to new phone users two years from now.

Ruweyda Salim filed the complaint on June 9, nearly two years after the incident in which she claimed Buffalo police officers harassed and intimidated her while she recorded them. Salim also named Lt. Michael DeLong and the Buffalo Police Department in the lawsuit.

Critics are condemning a Northtowns auction that features World War II-era Nazi paraphernalia as inappropriate. Available will be an item that includes a derogatory term for Blacks and the same model of assault rifle used in the Tops Markets attack.

Take a peek inside the world's oldest restaurant

Take a peek inside the world's oldest restaurant

Roe v. Wade struck down: Ruling had secure abortion across the US 50 years ago

Roe v. Wade struck down: Ruling had secure abortion across the US 50 years ago

Matt Singer of Sunny Clean Water talks about the University at Buffalo startup in a lab at Davis Hall on UB's North Campus in Amherst, (John Hickey/Buffalo News)