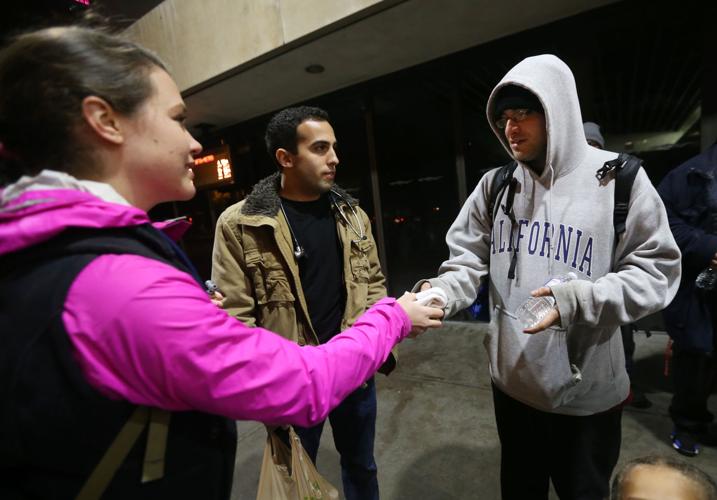 Medical students Jillian Smith, left, and Mike Sayegh, center, speak to a man outside the bus station downtown and give him some socks. UB HEALS is a community outreach program where medical students and physicians from UB medical school seek to improve healthcare access for homeless people within the Buffalo area. They partner with staff from the Matt Urban Hope Center every Tuesday and Thursday. (Sharon Cantillon/Buffalo News) 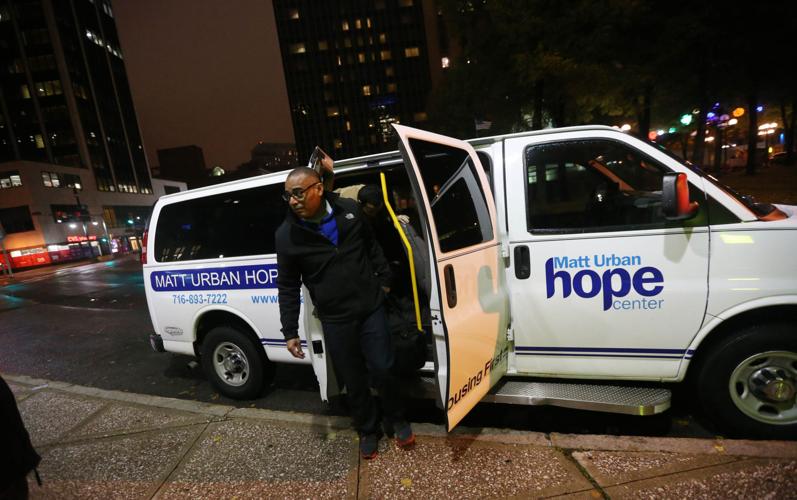 UB Faculty Dr. David Milling gets out of the van at Lafayette Square. (Sharon Cantillon/Buffalo News) 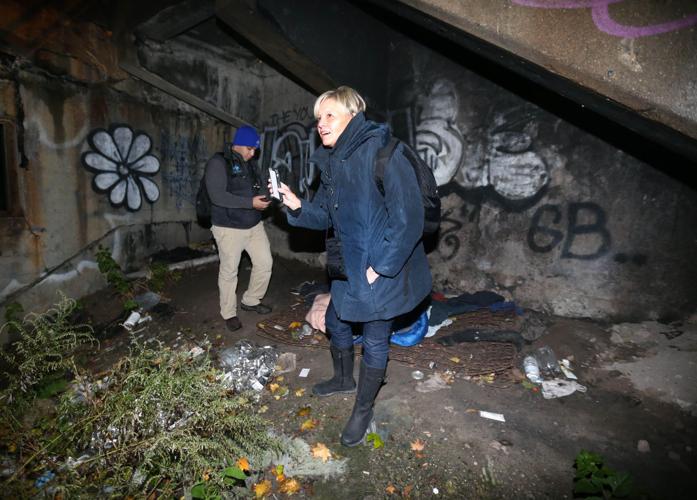 Support this work for $1 a month
By Anne Neville

Thomas Schmieder was suffering from pain in his ear, making him wonder whether he should seek medical help in an emergency room.

Then, just outside the door of the downtown bus station on a raw Tuesday night, medical help came to him.

Dr. Jacob Ramseyer and Moudi Hubeishy, a UB medical student, greeted Schmieder, who described his symptoms. With their advice, he decided not to go to the emergency room, but to seek help the next morning.

“Talking to them was very useful,” said Schmieder, 30, of Buffalo. “It put a lot of rest in my mind.”

This consultation was one of the hundreds that medical students and doctors have provided since March with UB HEALS, the Homeless Health Education Awareness and Leadership in Service, from the University at Buffalo’s Jacobs School of Medicine and Biomedical Sciences.

These doctors and students don’t wear immaculate white coats or see patients in brightly lit exam rooms. Instead, medical student volunteers don jackets and warm hats, hoist bags packed with supplies and seek out patients in the downtown bus station, under bridges and in housing for the chronically homeless. They hit the streets every Tuesday and Thursday night to evaluate and treat the ailments and injuries of the neediest, while encouraging them to establish more lasting relationships with traditional medical professionals.

“I think a lot of us got involved because this is why we got into medicine – helping people who have the greatest needs,” said Jillian Smith, a second-year medical student.

They often start their nights at the bus station in downtown Buffalo, where Dr. David Milling greeted a large man with weather-battered features. The pair sat in chairs next to each other. Milling reached out and gently touched the man’s knee.

It was the second time Milling, faculty adviser for the group, had seen this man. The first time, the man opened a pack and produced the bottles containing all his medications.

“He knows what all of them are for,” Milling said. That level of understanding can be unusual in any patient, much less one with a precarious living situation, Milling said.

The students and doctors provide brief exams, in-depth discussions and encouragement to seek out more traditional care. Sometimes, they also evaluate a medical situation, realize the condition is serious and call an ambulance.

On a recent night, the students were accompanied by Kim Burlingame, a clinical outreach registered nurse from the Matt Urban Hope Center, and by Sue Lucas, a registered nurse with Neighborhood Health Center, which operates two clinics in Buffalo and one in Hamburg.

Burlingame said some of the people she encounters tell her about negative experiences they have had when seeking health care. That can be a roadblock.

“You could build 100 brick-and-mortar clinics, and I could make referrals all day, and people don’t go,” she said. “That is a huge barrier for our clientele.”

The students and doctors try to break that barrier over time.

“When we started, so much of our work was building rapport,” Smith said. “There are people now who know us by name, and there are also brand-new people who say, ‘I heard about your program.’ ”

The medical students and physicians carry some over-the-counter medication and the critical tools of their profession. “A lot of a physical exam can be done with a stethoscope and a blood pressure cuff,” said Hubeishy, who is president of the UB HEALS program.

“A lot of it is just connecting – ‘Do you have a physician?’ ” Hubeishy said. “A lot of times the answer is yes, but then we ask, ‘How long since you have seen them?’ ”

One problem preventing people from getting care is lack of transportation, said Burlingame. “Even if they wanted to go, they can’t get there,” she said. “UB HEALS meets our patients exactly where they are at, and they accept them exactly as they are.”

The most common ailments the students and doctors have seen are wounds that can become infected, respiratory complaints, rashes and other skin problems.

The HEALS volunteer program started in March, inspired by a street medicine program called Operation Safety Net that Dr. Jim Withers started in Pittsburgh in 1992. “We got in contact with him when we were designing the plan for this program, and he gave us some ideas,” Hubeishy said.

The local volunteers started planning in January, and got a break when they were able to partner with the Matt Urban Center.

Before each set of “street rounds,” the volunteers gather for a half-hour at UB to prepare before carpooling to the bus station. “Every night it’s unique, what we see,” Hubeishy said. “The last thing we always say is ‘expect the unexpected.’ ”

At the bus station, the group gathered around a small satellite outreach office that the Matt Urban Center runs. Then they fanned out in pairs to greet people.

“We go around and talk to people, with a ‘Hi, how are you doing?’ kind of approach,” Smith said. “We introduce ourselves as being with UB HEALS. Two of us will approach a person, and then more might come over.”

A Matt Urban van pulled up to take the doctors and medical students to places where the homeless huddle against the cold, and people gathered around. The students handed out socks and knitted hats and scarves donated by a church’s knitting ministry.

Before climbing into the van, Milling called out to one man, “Make sure you keep that eye appointment!”

The students and doctors have vivid memories of those they have met on the streets. For Milling, it was a 19-year-old lying under a bridge, wrapped in an afghan against the night’s chill. “He was just a few years younger than the students who were evaluating him,” Milling said. “That kind of sticks with you.”

Milling, who is senior associate dean for student and academic affairs and associate professor of clinical medicine, explained that the HEALS program benefits the student volunteers, too. “It gets students out of the bubble they might be in” of comfortable lives and schoolwork, he said. “It opens their eyes.”

Street rounds “bring awareness to the circumstances that people in our city have to deal with every day,” said Michael Sayegh, a third-year medical student. “I enjoy being part of what may be a person’s first step toward improvement of their bio-psychosocial health.”

His most vivid memory is of speaking with two young homeless men, a conversation that included both their immediate needs and their future goals.

A limping man flagged down the van to ride a few blocks. Inside, he talked about his gout, and Milling and Sayegh quickly figured out what medication he had taken for that ailment in the past. They encouraged him to get to a clinic the next day. The ride completed, the man got out, grateful for the lift.

The UB HEALS street rounds ended at Hope Gardens, a residence for women who have been chronically homeless. In a conference room, the group spoke to several residents. One woman asked about flu shots, and the group promised to look into providing them.

"We are heartbroken," Mayor Byron W. Brown said. "We are in pain right now."

Daniel D. Kachinoski, 40, of Chester Avenue, was shot and killed by an officer after Town of Niagara police responded to a domestic incident at the house around 8:45 p.m. where he, his mother and his son lived.

Medical students Jillian Smith, left, and Mike Sayegh, center, speak to a man outside the bus station downtown and give him some socks. UB HEALS is a community outreach program where medical students and physicians from UB medical school seek to improve healthcare access for homeless people within the Buffalo area. They partner with staff from the Matt Urban Hope Center every Tuesday and Thursday. (Sharon Cantillon/Buffalo News)

UB Faculty Dr. David Milling gets out of the van at Lafayette Square. (Sharon Cantillon/Buffalo News)