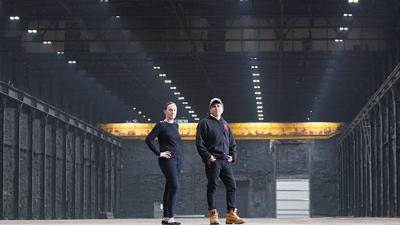 Three of those kicks, end to end, by the kicker nicknamed "the Punt God" still wouldn't come within 100 feet of the length of the colossal soundstage being completed this month at Buffalo FilmWorks.

The 828-foot-long Stage 4, which took two years and $3 million to build, is longer than any in the moviemaking mecca of Hollywood. The soundstage figures to boost Western New York's ability to attract major movie productions because it is made to order for blockbuster films, said Tim Clark, commissioner of the Buffalo Niagara Film Office.

"It's certainly one of the longest soundstages in North America and one of the largest in the world," Clark said. "There is nobody who doesn't come out of there with their mouth agape. There just aren't many of this kind of scale anywhere."

Stage 4 occupies 77,832 square feet, with a width of 94 feet and a height of 39 feet to the truss line, the roof structure that supports lights and other rigging. That's just shy of the 80,000-square-foot space at Atlanta Metro Studios, considered the longest in the U.S. when it opened in 2016.

The Atlanta soundstage – which is four 20,000-square-foot soundstages made into one with movable walls – has enticed large film productions to shoot there, said Nick Smerigan, director of operations. That's something Buffalo FilmWorks hopes to emulate.

Stage 4 is the fourth soundstage built at Buffalo FilmWorks at 370 Babcock St. on the East Side, in the Seneca-Babcock neighborhood. Film productions and commercials have been made at the movie studio's other three soundstages since 2018.

"A Quiet Place Part II," distributed by Paramount Pictures, and "Nightmare Alley," from Fox Searchlight Pictures, both of which came out in 2021, are the biggest motion pictures to date to use Buffalo FilmWorks.

The sets for "Nightmare Alley" were built on soundstages, and vintage cars were stored there before being moved onto location.

For "A Quiet Place Part II," more than 200 scenery painters, set decorators, carpenters and others worked for three to four months in Soundstages 1 and 2 before filming began.

Stage 4 brings FilmWorks' total square footage to 119,800. It's a hefty total that can allow a movie production or TV episode to use more than one soundstage at a time.

"You have to imagine you could build the facade of a whole city block in Stage 4, with the actual street and cars," co-owner George Pittas said. "You can turn this into the Old West, or a jungle for a 'Jurassic'-like movie."

Jonathan Sanger, the producer for "Marshall" and "Cabrini," two films shot in Buffalo, has seen Stage 4 and predicts it will be a big draw for filmmakers.

"Even major studios don't usually have a major stage like that, so it can be very, very useful to a lot of different films," he said.

Rail tracks reminder of past

Buffalo FilmWorks' three co-owners all grew up in the Southtowns – Pittas in West Seneca, Kevin Callahan in Derby and Jennifer O'Neill in Marilla. None had movie industry experience prior to buying an abandoned warehouse in the Seneca-Babcock neighborhood for $400,000 in 2016.

Rail tracks that run through the property are a reminder that rail cars were manufactured there a century ago by the Buffalo Car Co., until the factory complex was repurposed for World War I.

"The warehouse was basically abandoned and stripped of all the copper and wiring," she said. "It was very, very dilapidated."

Stages 1 and 2 have identical dimensions of 19,000 square feet and 24 feet to the truss. Stage 3 is 4,000 square feet, but has a height of 47 feet, making it one of the tallest soundstages in New York State.

That height led producers for Paramount+'s "Paranormal Activity: Next of Kin" to build a massive tower the film called for in Stage 3.

Rehabilitating Stage 4, partly due to its sheer size, has proved to be the biggest challenge of all.

The space had a badly damaged roof that allowed patches of sky to show through. There were damaged walls with broken, boarded up and cinder-blocked windows, broken doors and a floor with "six inches of gook," Pittas said.

"It was in a very deteriorated state," he added.

The walls, like in the other soundstages, now have black spray foam insulation for sound proofing, with the fire-retardant paint helping make the walls fade into the background when filming.

The roof has been repaired and reinforced, and the outside of the building is weather-proofed, with the addition of an exterior, insulated shell.

A climate-controlled heating and air conditioning system is being installed this month in the soundstage, matching what's in the other stages.

"Stage 4 gives us an edge in Buffalo with the cold winters, where they can just work all year-round and not require an outdoor backlot," Pittas said.

"That big space was always something film producers looked at, and said this would be a great place to work if they ironed the kinks out and got it going, and they've done all that," he said.

Buffalo FilmWorks has also entered into a partnership with Expressway Cinema Rentals to provide inhouse movie rental equipment, such as cameras, lighting, cranes and dollies, to movie productions, which reduces the need to ship equipment to Buffalo.

Parking at the film studio has room for 60 tractor-trailers and 250 passenger vehicles, another plus for large productions.

O'Neill said it is satisfying being a part of the redevelopment of Seneca-Babcock.

"A lot of businesses now are coming and putting roots here and creating jobs here," she said.

Buffalo FilmWorks is expanding, while two planned Buffalo film studios led by people from outside the state have stalled.

Great Point Media, which prior to Covid-19 was scheduled to open on the West Side in fall 2021, finally broke ground in the past several weeks to build two soundstages. Its opening is now projected for 2023.

"I think the 'more to come' sign is definitely up for this area," Clark said.

New York State's film tax credit provides a major incentive for making movies in upstate New York. It offers a tax credit of 35% of labor costs for areas such as camera, lighting, art department, production design and sound. The first 25% also includes expenses such as hotel lodging and equipment and vehicular rentals.

The addition of Stage 4 adds to the moviemaking appeal of Buffalo and Western New York, Clark said.

The region's assets include historic architecture, close proximity to rural and other environments, cooperative municipal governments, a large and skilled union crew and an active film commission.

Pittas said the support of the Buffalo Niagara Film Office has been invaluable.

Clark predicts a bright future for Buffalo FilmWorks, especially with the addition of Stage 4.

"They saw firsthand what this could be, and instead of licking their wounds with Covid, they decided to invest and put their heart and soul into Stage 4," Clark said. "Those guys know how to do it economically and right, and to just get it done.

"It won't be long before that place is full of hundreds of people working on movies all at once," he said.

Watch now: Two years and $3 million later, Buffalo FilmWorks has one of the longest soundstages in U.S.

"New York is defined by its diverse culture and history, and we will continue efforts to keep our state's inspiring story alive," Gov. Kathy H…

What's that in the downtown sky? A crew for a Mark Wahlberg film

A helicopter is here today with the crew of a feature film to shoot overhead scenes of downtown Buffalo, the waterfront and Skyway. 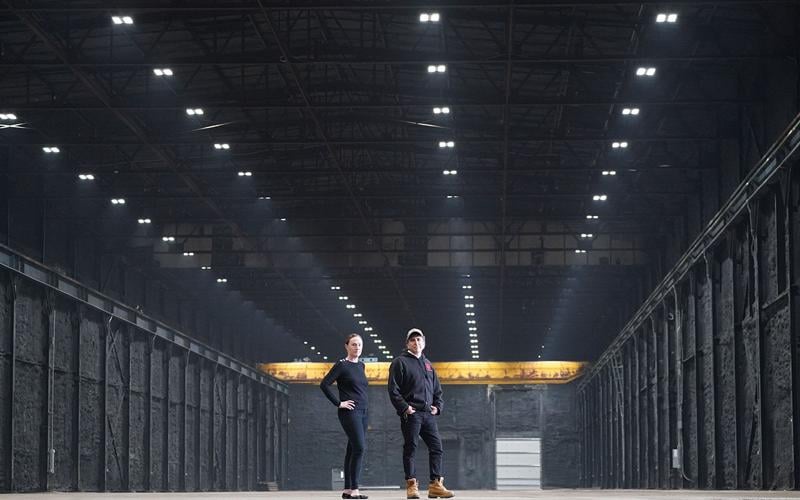 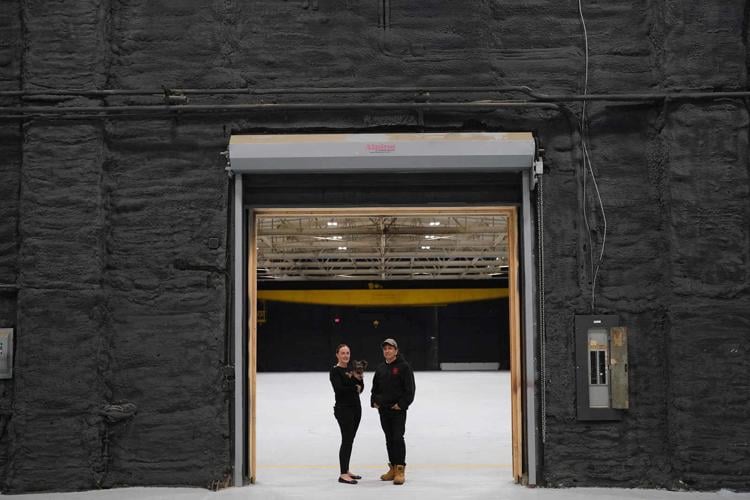 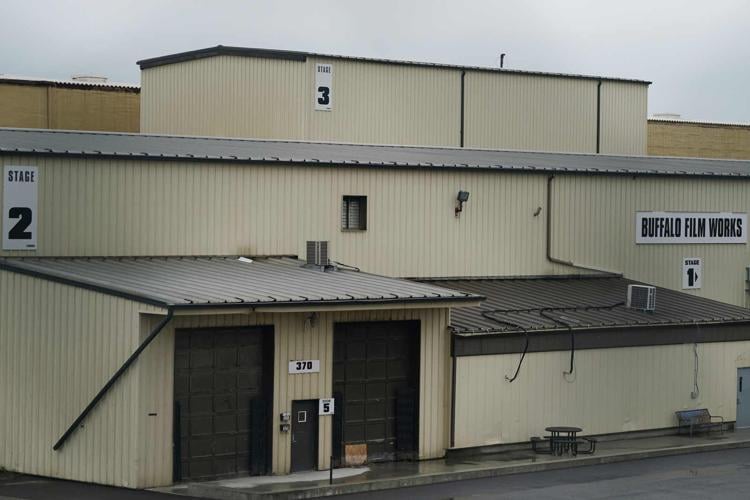 Buffalo FilmWorksis located on Babcock Street where a former railcar factory that sat vacant for decades has taken on new life as a soundstage catering to Hollywood-scale productions. 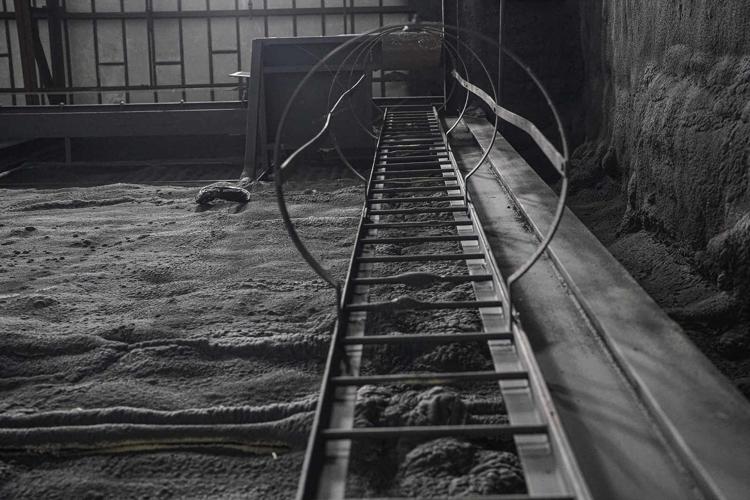 A view up the ladder to the catwalk at Soundstage 3, which is the tallest of the spaces at Buffalo FilmWorks. 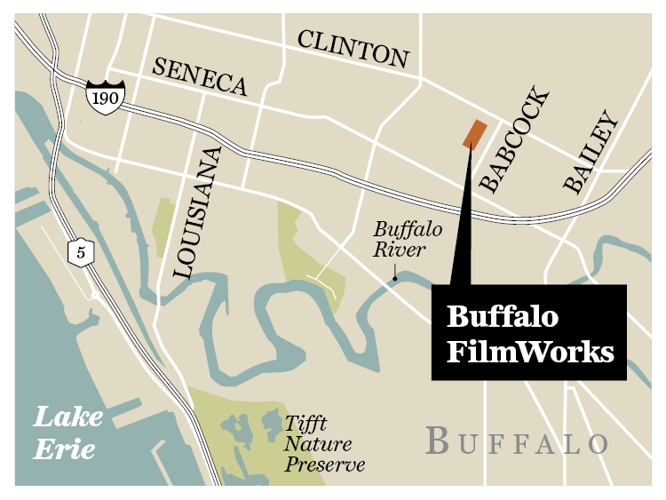