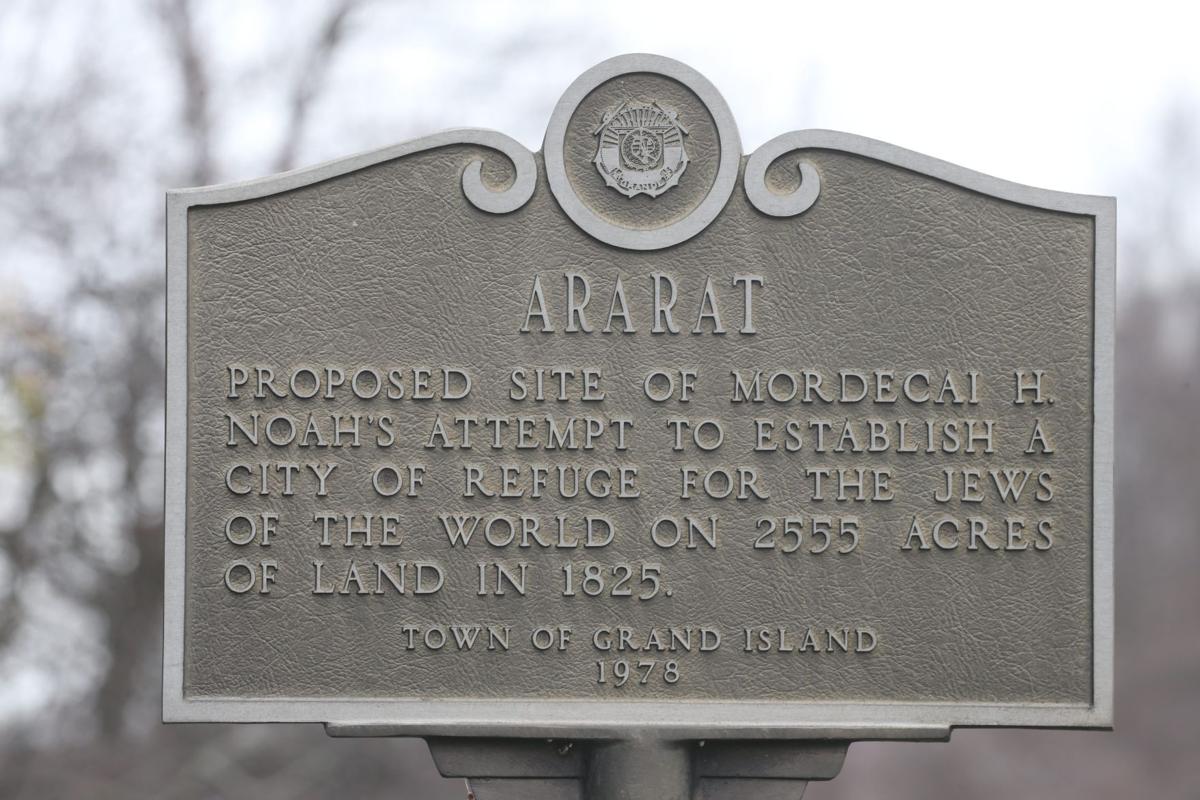 A plaque honoring the attempt to create a Jewish homeland, called “Ararat” on Grand Island. 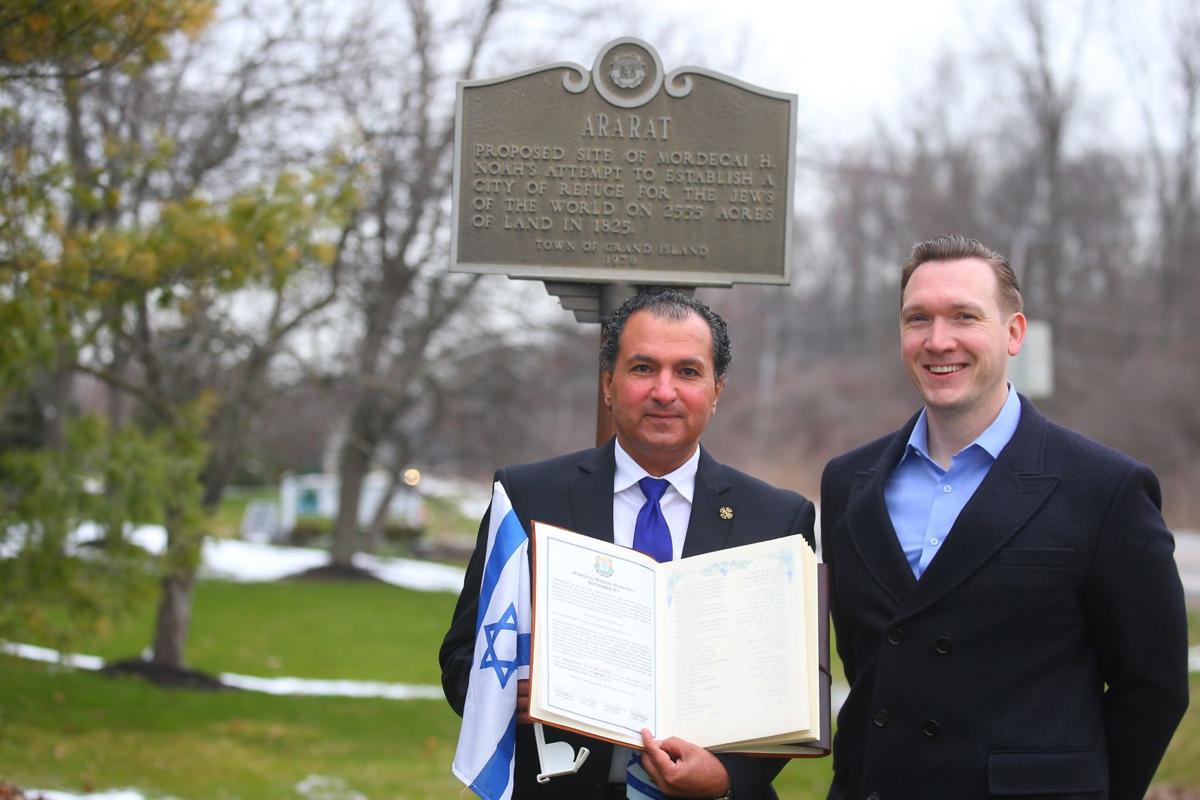 Mordecai Manuel Noah had a grand vision for Grand Island in 1825.

Nearly two centuries ago, the Jewish-American journalist, diplomat and philanthropist viewed the island as a utopia for Jews around the world, purchasing 2,500 acres of land to build his sanctuary, to be called Ararat.

For many reasons, Ararat never took off.

Still, the current Town of Grand Island, inspired by his ideas, has proclaimed Sept. 2 as Mordecai Manuel Noah Day. The reason?

“The island should be a place of tolerance for all religions,” he said.

Born in Philadelphia, in 1785, Noah also held the titles of sheriff, judge and playwright during his life. After dabbling in politics in South Carolina, Noah moved to New York City, becoming one of the more important Jewish leaders in New York before the Civil War.

His vision for Ararat grew out of what he saw as the persecution of Jews around the world, McMurray said.

“The Jewish American experience was different than in any other country,” he said. “In the time of Mordecai Noah, we had Jewish businesspeople and scholars grow to great prominence.”

Ararat was meant to be a temporary home for Jews, until they could return to Palestine. Writing to rabbis in the major European cities of the time, Noah asked for support for his plan, and was turned down. In some cases, he was ridiculed. Israelites, the rabbis explained, were attached to the countries they lived in, and supported their governments. Besides, any plans to restore Zion would be under God’s guidance, not Noah’s plan.

Still, Noah traveled to Buffalo on Sept. 2, 1825, and led a large parade of both Christians and Jews, including militia, Masons and city leaders, to St. Paul’s Episcopal Church after he was unable to get his followers to Grand Island. During a ceremony at the church, the 300-pound cornerstone of Ararat was laid on the altar, and the Jewish refuge on Grand Island was announced. Without support, however, the plan eventually died.

Ararat, if it had been built, would have occupied the land adjacent to the intersection of Whitehaven and East River roads. A solitary plaque on the side of the road marks the proposed refuge, and sits across from Whitehaven Cemetery on East River Road, set back from the street.

Despite the failed venture, there is a lot to learn from Noah and his vision, said Michael Barsoum, pastor and founder of Community of St. Paul, and the man behind the idea to proclaim Mordecai Manuel Noah Day. Barsoum, who was born in Egypt and survived the Six-Day War in 1967 between Israel and what is now Egypt, Jordan and Syria, was so inspired by Grand Island and Noah’s story that he moved to the island.

“It’s a place of refuge,” he said. “I love the romance of it. It’s beautiful, serene, surrounded by water.”

As a result of the Six-Day War, Barsoum was taught to hate Jewish people from a young age. Later in life, as a Coptic Christian living in Egypt in the 1970s and ’80s, Barsoum experienced religious intolerance first-hand. Fleeing persecution in his home country, Barsoum emigrated in 1980 to Toronto, where he studied theology.

Barsoum also began to examine his feelings toward Jews, and realized that he had a lot in common with the Jewish people. “I started to reason with myself,” he said. “Why do I feel nasty toward Jewish people, when the Bible is clear that we are to love?”

From that point on, Barsoum began reaching out to the Jewish community, and listening to the experiences of the Jewish people, especially those who survived the Holocaust. He’s held hate prevention conferences in the Toronto area, and provided related workshops and seminars.

When Barsoum began to learn about Noah’s story, it struck a chord. More people should know about what he tried to do on the island, he thought, and decided to bring the idea to McMurray to have a day celebrating Noah in the town.

McMurray, a self-described Grand Island history buff, jumped at the chance to bring it before the Town Board. “Symbolism is important,” he said, adding that not celebrating Noah would be “a shame.”

“What I wanted to do is call attention to the fact that this place, our island, is a place of tolerance and respect for peoples of all faiths.”

The Town Board unanimously backed making the proclamation at a recent meeting, said Councilwoman Beverly Kinney.

“It’s a cool thing to be a part of,” she said. “The history is really unique.”

For the announcement March 21, the town brought in representatives of Christianity, Islam and Judaism to receive the proclamation.

“I was so proud,” McMurray said.

While Grand Island may be a small town, McMurray said, he hopes the proclamation inspires others to be tolerant, especially with the conflicts afflicting people throughout the world.

“I watch the news every day,” he said. “This would be a really powerful thing to do in our small community. In the spirit of Mordecai Noah, we will strive to make Grand Island a place of peace, a place of continued and everlasting respect and the freedom to believe, according to your conscience, or not believe.”

Going forward, Barsoum has created two books for people to sign, one for religious people, and the other for nonbelievers. He plans to deliver the books to the office of Israeli Prime Minister Benjamin Netanyahu in Jerusalem on Sept. 2.

A dinner will be held on July 19, Noah’s birthdate, at Byblos Niagara Resort and Spa to celebrate Mordecai Manuel Noah Day. Tickets purchased for the dinner will be entered in a drawing for a free trip to accompany Barsoum to Israel to deliver the books.

“It’s something the people here need to feel a part of,” he said. “It’s their island. They need to have an active part in the historic proclamation the Town Board has made.”

Added McMurray: “We’re tolerant of all people, believers and nonbelievers, without discrimination.”

A plaque honoring the attempt to create a Jewish homeland, called “Ararat” on Grand Island.