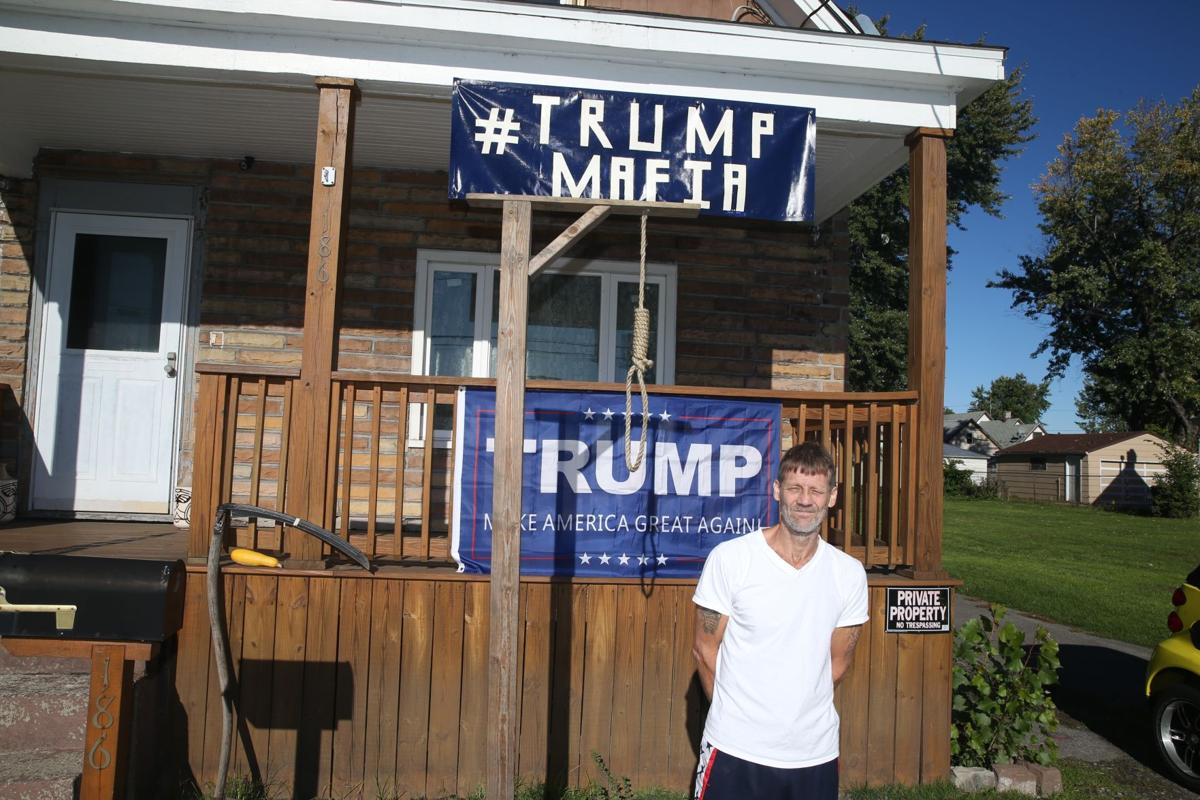 Egbert Bickley last week said the noose and gallows in front of his Babcock Street house is not a racial message. He took it down Sunday night. (John Hickey/Buffalo News) 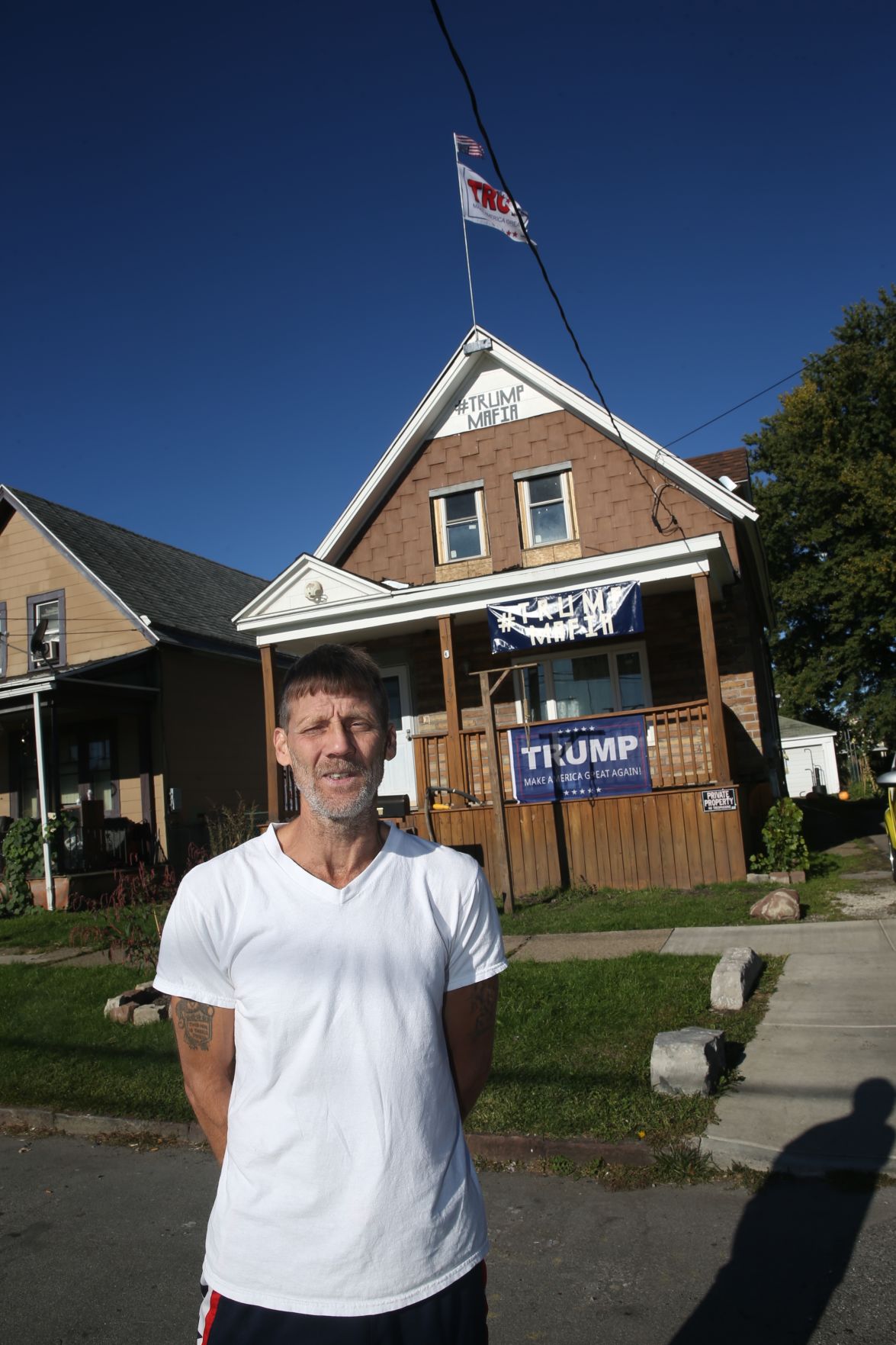 Egbert Bickley started flying an upside-down American flag atop the roof of his home a few weeks ago. He said it symbolized both his and the country's distress, but nobody understood his message.

Then about a week ago, in front of the Donald Trump campaign sign affixed to the porch of his Seneca-Babcock home, he put up a noose and gallows.

Now, he's getting plenty of attention.

State Sen. Timothy Kennedy and Legislators Barbara Miller-Williams and Patrick Burke said the gallows and noose are "clearly a racist symbol meant to invoke painful memories of lynching that have scarred the country for centuries."

Wingo, who has recently been protesting racism in America, including police shootings of African-Americans, by standing and raising his fist during the Pledge of Allegiance at Buffalo Common Council meetings, and not reciting the pledge, said what Bickley is saying is not a political statement, but a statement of hate.

“There is no way that guy didn’t intend for that to be racist,” Wingo said. “He said it was meant to offend everyone, but it will offend African-Americans more than anyone else."

“Regardless of what he thinks his message is, the message he is sending to people is one of hate, division and racism.”

This type of behavior, Wingo said, is why his protest continues.

“Hanging nooses on your front yard, reminding Americans of a time when we would openly kill blacks, it’s why we are protesting,” Wingo said. “He clearly is sending a message that he doesn’t value black lives. Who else got hung with nooses in America? He is clearly not valuing black lives.”

Bickley told The Buffalo News that the noose display is not a statement of racism and that's he's not a racist.

“So the noose actually comes along with my stress factor of everything that I’m tolerating with the ignorance that America doesn’t want to see," Bickley said. "That’s all great. It's all good, but not in my backyard."

The noose and gallows – a symbol widely accepted as having racial connotations because of its use in lynchings in the American south – have no racial meaning, according to the 52-year-old Bickley.

“I don’t want to hang anybody," he said. "We’re all hanging together, though, is my point.”

In addition to the noose, Bickley put up a gravestone that reads "your name here." A scythe leans nearby against his wooden porch. The gallows is actually a Halloween decoration he's used on his lawn in prior years, he said. (He also has an electric chair and a guillotine that aren't on display, he said.)

The upside-down American flag flies above a red, white and blue Trump flag. Two Trump signs hang from Bickley's porch. The first message he put up on his house was "#TrumpMafia," which he painted above two windows on the second floor. He's also got a sign hanging on his porch with the same message.

He said he's troubled by what's happening in his neighborhood.

"If you walk around and see what’s happening, you’ve got heroin addicts every other corner. You got girls out there selling [themselves] right on the corner now. It’s not a neighborhood it used to be. It’s not a great Irish neighborhood. It’s the new East Side. And in five, 10 years from now we will look like the East Side. We’ll be half run down, half destroyed and everybody will be out of here, like I am."

Bickley said he's sold his house and he has to move out in a couple weeks.

There are a variety of issues - both personal and concern with things in this country – that led to create this public display, Bickley said.

His house on Babcock Street has been cited for code violations three times in four years. Bickley admits his house needed a lot of work when he bought it in 2010. He moved into it in 2012 and has been working on it. Only one side of the house's siding remains unfinished, he said.

"I got foreclosure homes all around me and I’m the one that’s being written up," he said. "That’s just making me go crazy."

He also has some long-standing personal health issues. He said he's on disability assistance and doesn't have much money.

"I understand that people are offended by the noose, but why are they offended by a racial manner?" Bickley said on the street outside his home late Friday morning. "That was our way of law. We hung everyone that was a criminal that was put to death."

"Never once did that racial thought come across my mind," he continued. "For everyone to say that, aren’t they the problem with racism?"

Bickley said he grew up on Genesee Street and he only went to one year of high school. He got kicked out of Seneca-Vocational because he was arrested for trespassing.

He said he supports immigration limits from the Middle East, but not because he has any problem with Muslims.

Art Robinson, president of the Seneca Babcock Block Club, said Bickley recently came to one of the group's meetings and raised concerns about the city. He said he's known Bickley for years and he hasn't been a problem for the neighborhood. Robinson called him "harmless."

Robinson, who said he has Hillary Clinton and Brian Higgins campaign signs displayed at a property he owns, said everyone has the right to express political opinions. He said he doesn't believe there's a racial component to Bickley's message.

At least some of Bickley's neighbors agree.

Kelly Galluzzi lives across the street and has a Trump sign on her front lawn. She said the neighborhood's been riddled by problems caused by abandoned properties.

"I totally agree with him, but I know this ain't racist," Galluzzi said.

Egbert Bickley last week said the noose and gallows in front of his Babcock Street house is not a racial message. He took it down Sunday night. (John Hickey/Buffalo News)