This Clarence house on Shisler Road is considered a "zombie home," with no owner and no one taking responsibility for maintenance. The town, together with the Western New York Law Center, sued the mortgage servicer in September 2020, seeking damages and compliance with state laws. 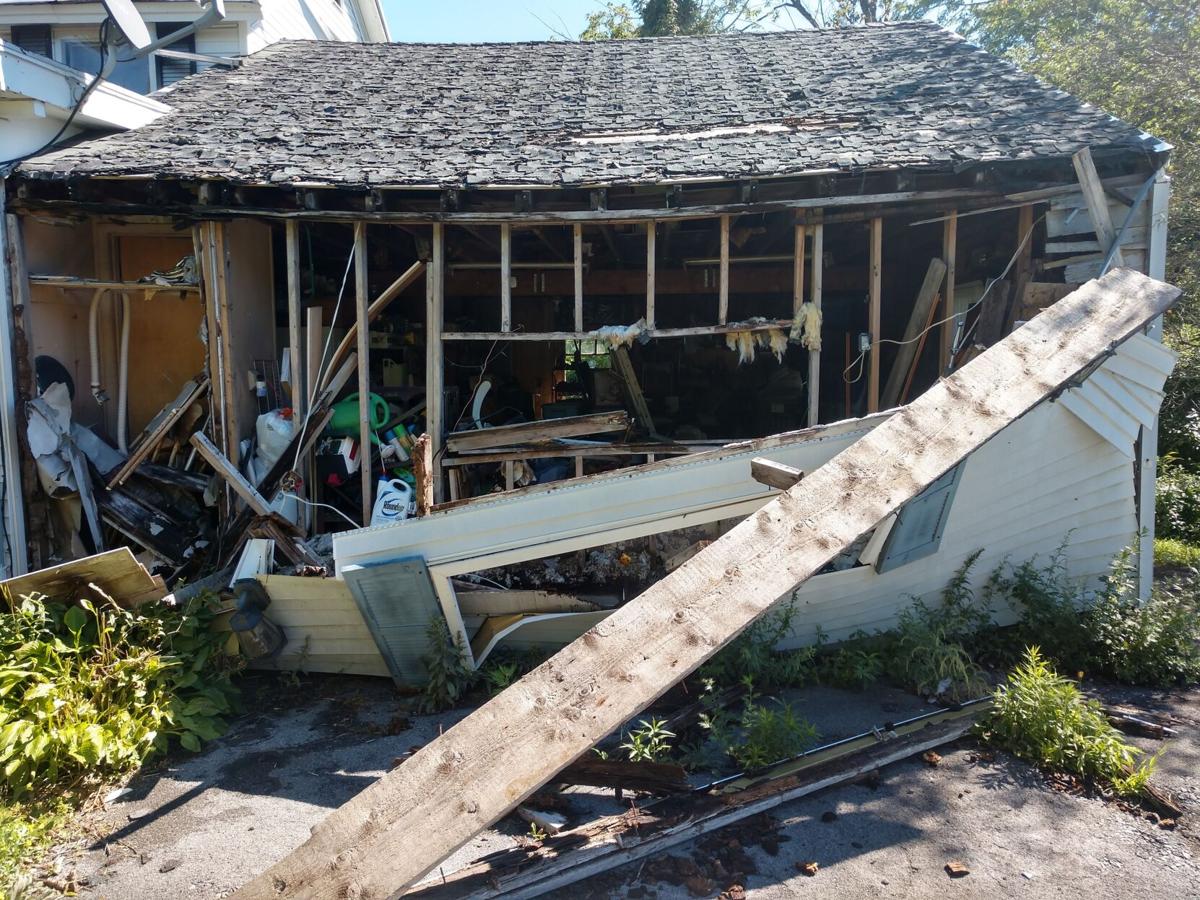 The garage at the zombie home at 4765 Shisler Road in Clarence has collapsed. 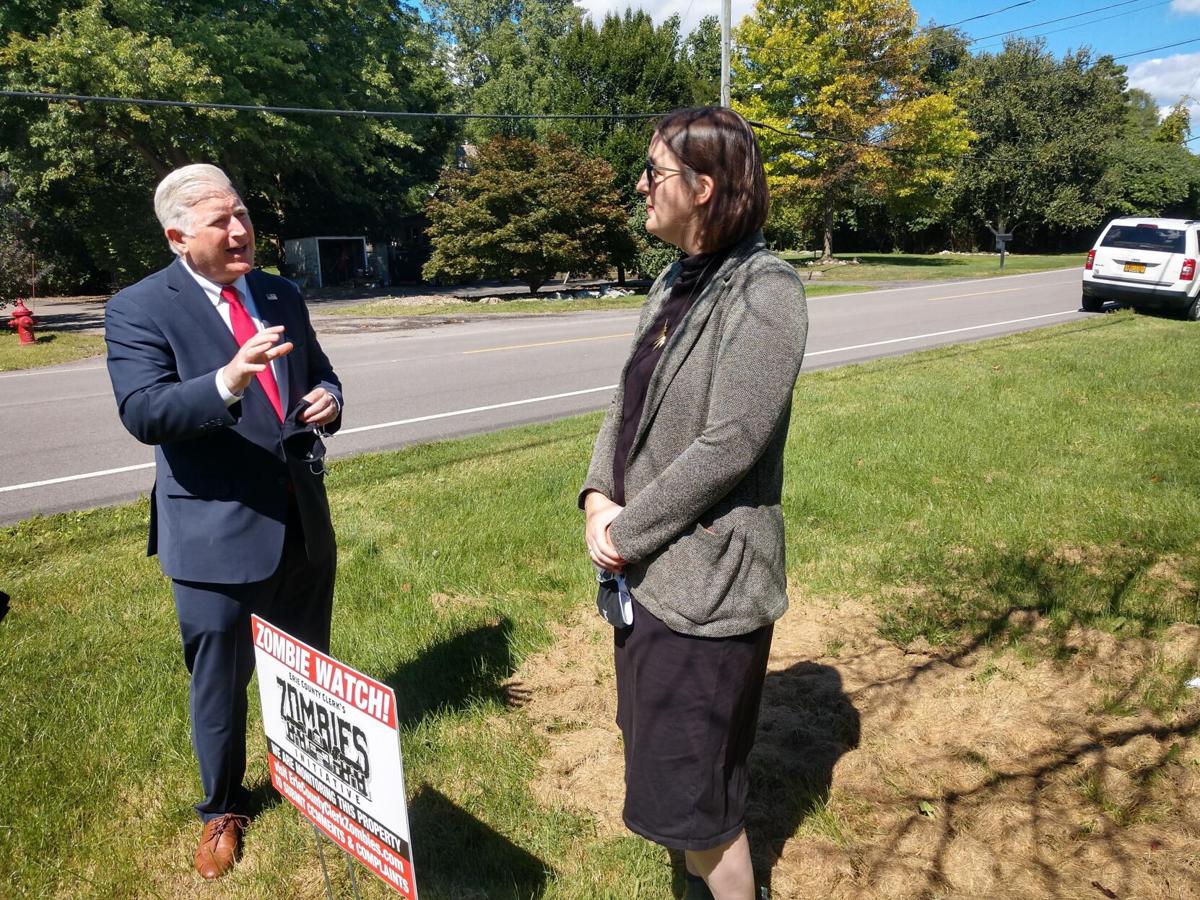 Erie County Clerk Michael P. Kearns and Kate Lockhart of the Western New York Law Center, outside the Clarence home that is the subject of a ZOMBIES Initiative action.

The Town of Clarence is suing banking giant U.S. Bancorp of Minneapolis and national mortgage servicing company Mr. Cooper over their failure to maintain a vacant Shisler Road home, allowing it to become a "zombie property" that threatens to drag down the surrounding neighborhood.

The lawsuit, filed by the Western New York Law Center on behalf of the town, marks the first suit filed as part of Erie County's ZOMBIES Initiative.

That's an effort which was launched in June 2019 by County Clerk Michael P. Kearns – who has focused on the issue since he was in the state Assembly – in response to a growing problem of abandoned homes in various stages of foreclosure. The goal is to embarrass and pressure mortgage companies to take responsibility for properties on which they have initiated foreclosure, ensuring they are properly maintained and do not deteriorate.

The legal foreclosure process in New York can drag on for many months before a lender finally takes possession of a house following a mortgage default. But many homeowners simply pack up and leave after getting the first foreclosure notices, not realizing that they are still the legal owners and can still fight the foreclosure. As a result, the home is sometimes left vacant and neglected.

State law now requires that lenders inspect, secure and maintain such properties after they start foreclosure proceedings, and allows municipalities to sue lenders that allow deterioration to occur. In this case, Clarence and the Law Center allege that Mr. Cooper and U.S. Bank failed to maintain a four-bedroom house at 4765 Shisler Road that has been the subject of growing concern.

"In these very difficult times it is essential that banks and servicers be held accountable and that our neighborhoods are preserved," Kearns said Friday.

The 2,812-square-foot Clarence property has been in foreclosure since 2012, although it only became abandoned two years ago. Since then, according to the town, the power and gas service were shut off, the basement flooded, the windows have been broken, the garage collapsed, animals have gotten in, and the foundation has been damaged.

The ZOMBIES Initiative and Law Center learned of the problems in the fall of 2019, after Clarence Code Enforcement Officer David Albert notified them. The Law Center filed a complaint with the state Department of Financial Services in October of last year, triggering conversations with the prior mortgage servicer, which then transferred the servicing to Mr. Cooper – the business name of Nationstar Mortgage – in December 2019.

The Law Center sent "numerous letters" to Mr. Cooper to seek compliance with the law, but "they have not made a meaningful effort to do so," according to the ZOMBIES Initiative. Meanwhile, the loan was added in May 2020 to a Wall Street investment security administered by U.S. Bank.

“The ZOMBIES Initiative’s goal for each property we encounter is to keep our communities safe,” said Kate Lockhart, director of the Vacant and Abandoned Properties Program at the Western New York Law Center. “The Town of Clarence gave Mr. Cooper many opportunities to bring this property into compliance. This suit is the result of months of neglect by Mr. Cooper and our goal is to ensure that this property gets addressed and Mr. Cooper pays fines for their non-compliance with New York State law.”

The lawsuit, filed in Erie County Supreme Court, is seeking a civil penalty of $500 for each day that a code violation existed on the property, starting in December 2019 when Mr. Cooper began servicing the loan. That's a total of $75,000, on a home estimated to be worth less than $170,000 by Trulia and Zillow.

"Hopefully, because of this suit, the present mortgage servicer will expedite the foreclosure, transfer the home to a new responsible owner, and pay damages to the taxpayers of the Town of Clarence,” said Clarence Supervisor Patrick Casilio.

Zombie homes plague suburbs as much as Buffalo, report finds

Banks have opened foreclosure proceedings against more than 600 Erie County homeowners since the start of the year, prompting the Erie County Clerk’s Office to create a new Zombie Foreclosure Task Force. Two-thirds of the 617 new foreclosures are in Buffalo, Lackawanna and the first-ring suburbs. “We are in crisis, and these numbers prove we need to address this

Erie County Clerk Michael P. Kearns is asking the county to allocate $500,000 in funding from the CARES Act so his office can coordinate a foreclosure prevention program geared to help county residents who can’t keep up with their mortgage payments because of job and business disruption stemming from the coronavirus pandemic. In a letter sent Wednesday to Erie

Turning the corner on zombie homes

Towns, cities and villages are using new tools to get the upper hand on vacant homes caught in an incomplete foreclosure process.

Erie County Clerk Michael P. Kearns has come up with a new initiative to combat two of the biggest problems that contribute to “zombie homes” — homes that have been abandoned by owners during the lengthy foreclosure process but have not been been taken over by banks. For too long, communities have not found out about the properties in

At this rate, zombies won’t have anywhere to live around

“Zombie properties” are vacant homes whose owners – underwater on their mortgages – abandon their properties. The keys get turned over to the bank holding the mortgage, but most banks don’t want to put money into properties before they are resold. That gray area, in which no one takes ownership of the property, is what gives rise to zombie

By Michael P. Kearns and Joseph A. Kelemen This year the Erie County Legislature allocated $200,000 to combat zombie properties. The Western New York Law Center and the Erie County Clerk’s Office are working together with the county’s municipalities to hold banks accountable for zombie properties in disrepair. The City of Buffalo will soon commence its tax foreclosure proceeding

Editorial: Shortening foreclosure will help in fight against 'zombie' homes

Vacant and deteriorating homes are the bedbugs of neighborhoods. They suck the lifeblood out of what were once strong communities and start to break down the pride of residents. The problem begins with a homeowner facing financial difficulty stemming from job loss, medical bills, divorce or just overspending. The problem hits the neighborhood when the mortgage holder begins to

This Clarence house on Shisler Road is considered a "zombie home," with no owner and no one taking responsibility for maintenance. The town, together with the Western New York Law Center, sued the mortgage servicer in September 2020, seeking damages and compliance with state laws.

The garage at the zombie home at 4765 Shisler Road in Clarence has collapsed.

Erie County Clerk Michael P. Kearns and Kate Lockhart of the Western New York Law Center, outside the Clarence home that is the subject of a ZOMBIES Initiative action.