The call to 911 came from a 16-year-old who said she was feeling nauseated and her heart was racing.

She was weak and dizzy, and when Town of Tonawanda paramedics arrived at her apartment they learned her mother had similar symptoms.

Paramedics Ruddy Rodriguez Barone and Jason Rutecki soon suspected the women had been exposed to carbon monoxide, a theory confirmed after they asked volunteer firefighters to take readings within the dwelling.

Rodriguez Barone and Rutecki ushered the teen and her mother outside only to learn two younger sisters remained asleep inside. Emergency responders managed to get the whole family out and, after treatment at the scene and at local hospitals, everyone made a full recovery.

"It's humbling," Rutecki said in an interview Wednesday in police headquarters.

The close call started on March 11 in an apartment on Cobb Street in the town's Sheridan Parkside neighborhood.

Wilmary, the teen who called 911, said she hadn't felt well for much of that day. "I kept feeling lightheaded. When I stood up, my head felt light," she said in an interview.

By midnight, as she lay in bed, her room felt like it was spinning. When she went to tell her mother, Maragely Marave, her mother said she didn't feel well, either.

Wilmary said she came to and pulled herself up on one of her sister's beds, and tried to help her mother, but she was struggling to stay awake and fading in and out of consciousness.

"I had no strength. I tried to lift my hand and it just started shaking," Wilmary said. "We just laid there for 10 minutes trying to breathe."

She said she finally found her phone to call to get help. When Rodriguez Barone and Rutecki responded, they asked Wilmary and her mother to describe what was wrong.

The women's symptoms and a finding of low levels of carbon monoxide in their blood led the paramedics to suspect a leak somewhere in the home.

The paramedics asked for a fire official from the Sheridan Parkside Fire Company to measure carbon monoxide in the dwelling, which did not have fire or CO detectors.

Most people will not experience symptoms when exposed to carbon monoxide up to 70 parts per million, according to the U.S. Consumer Product Safety Commission. However, continuous exposure to concentrations above 150 ppm or 200 ppm can lead to disorientation or worse.

Fire officials measured levels of 145 ppm at the door to the apartment and 400 ppm farther inside the unit.

At that level, Rodriguez Barone said, "They could certainly slip into death."

By this point, the paramedics had led Wilmary and Marave out of the home. "They said we have to leave the house immediately," Wilmary said.

However, because the carbon monoxide had left the women so confused, they weren't able to communicate that Wilmary's sisters – Edmary Ortiz, 13, and Neliamary Ortiz, who is 9 – were still inside, sleeping.

"They were a little lethargic, staggering a little bit," Rutecki said of Wilmary and her mother.

Eventually, the women alerted the paramedics to the sisters' presence and firefighters got the younger girls out along with Wilmary's stepfather, Edwin Ortiz.

Crews provided high-flow oxygen to the sickened family members and ambulances took the girls to Oishei Children's Hospital and their mother to Kenmore Mercy Hospital.

How did the family become exposed to carbon monoxide? An officer who returned to the home three days later reported a worker was on site installing a new tankless hot water system. The installer said the old system apparently developed a crack in its heat exchanger, allowing the gas to leak out.

A town code enforcement officer also directed the family to install fire and carbon monoxide detectors, which Wilmary said they did.

Rodriguez Barone and Rutecki said the honor they received from the police department was appreciated but they wanted to make sure the police officers, Sheridan Parkside firefighters and Twin City Ambulance emergency personnel who responded to the scene also get credit.

"We don't do the job for recognition," Rodriguez Barone said.

Rodriguez Barone, 45, has 25 years as a paramedic, including three with the town. Rutecki, who is 41, has served as a paramedic for 24 years, the last eight with Tonawanda.

The partners, who work the overnight shift, said they often don't have any idea what they'll find when they show up at a call.

"We are the true front lines," Rodriguez Barone said. "We go to the unknown."

Their supervisor, Michael Baumgartner, said this call could have ended very differently.

"It just echoes the good job that they do on a consistent basis especially with everything that's happened this year with Covid," he said. "It's been very stressful for everybody in the paramedic unit, and our guys and gals just continue to do a good job every day."

Wilmary, who spent much of the next day at the hospital, said the most unsettling part of the night was when someone said she and her family could have died if they'd stayed in the house too much longer.

"My heart dropped," she recalled. "And that's why I'm so thankful for the paramedics, because they got us out of there really quick." 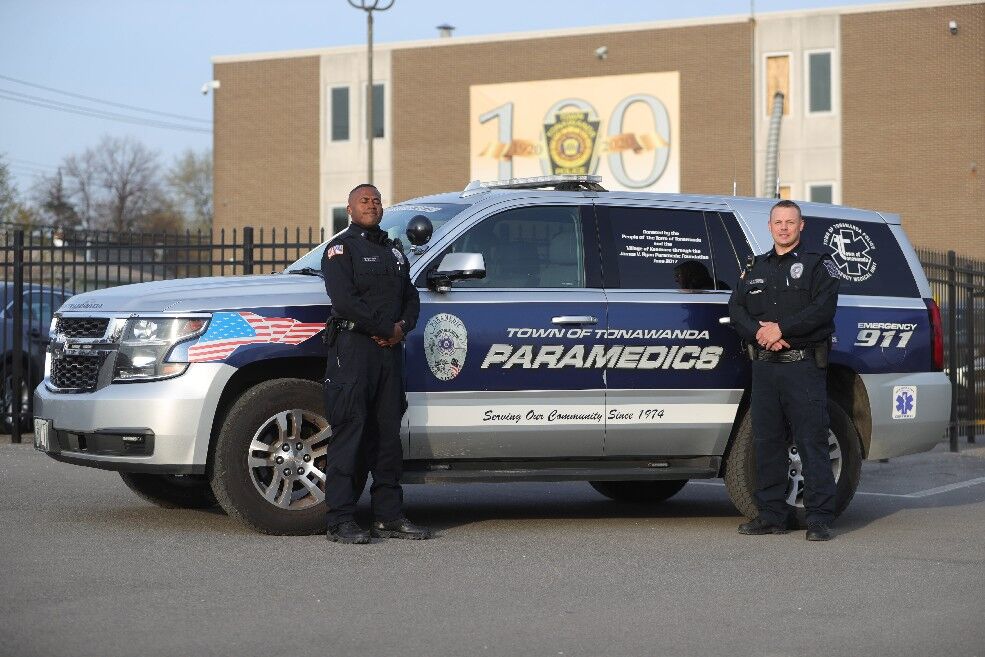 Town of Tonawanda paramedics Ruddy Rodriguez Barone, left, and Jason Rutecki were honored recently for helping to save a family sickened by a high level of carbon monoxide in their apartment, which did not have a CO detector. 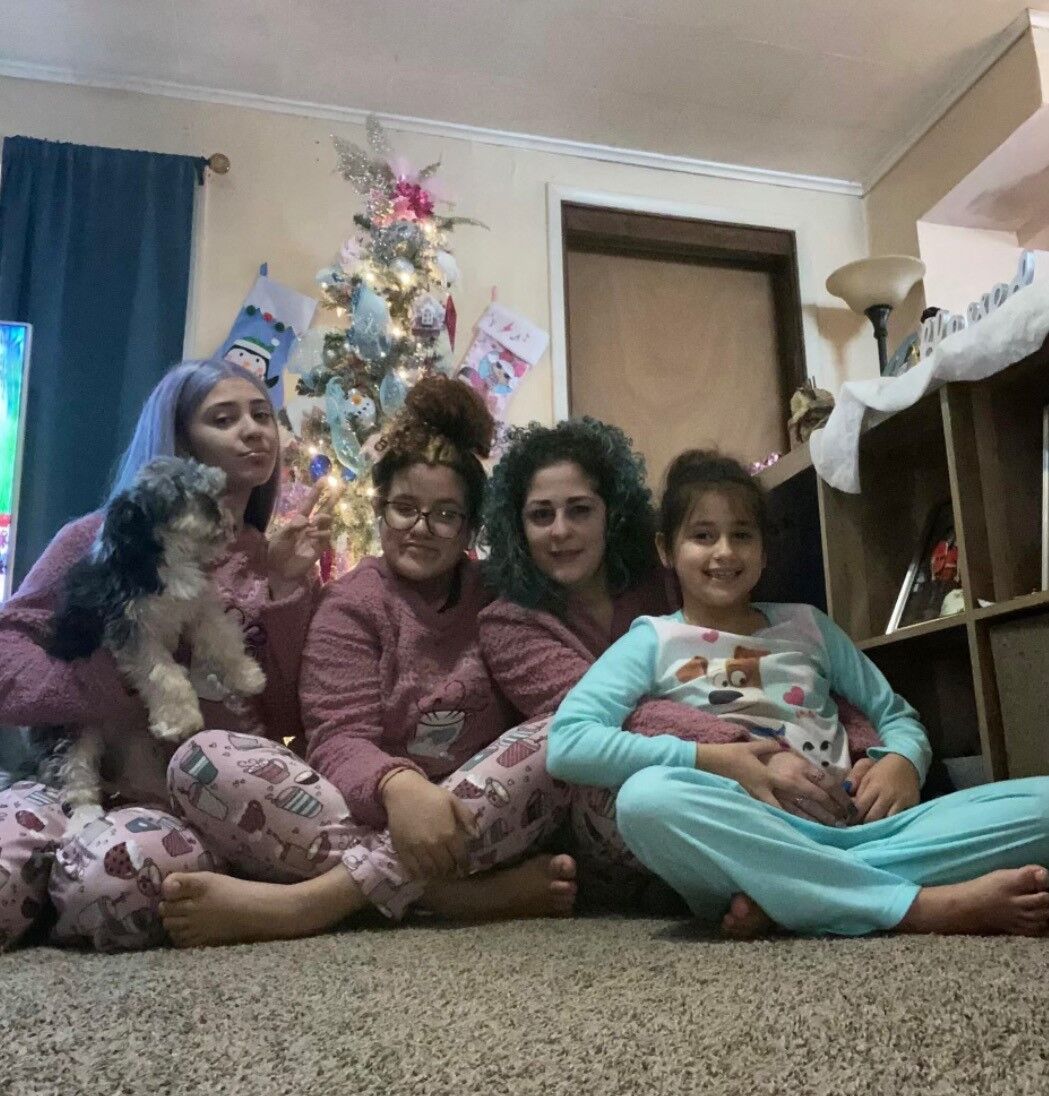 From left to right: Wilmary Rosario (holding Cocoa); her sister Edmary Ortiz; their mother, Maragely Marave; and the youngest sister, Neliamary Ortiz. They were rescued in March from their Town of Tonawanda home after paramedics figured out they were exposed to high levels of carbon monoxide thanks to a leak from a hot water heater.