Subscribe for $1
Read Today's E-Edition
Share This
To fight racist hate, Tops survivor and his mom collect a mountain of children's books
0 Comments
Share this
1 of 3 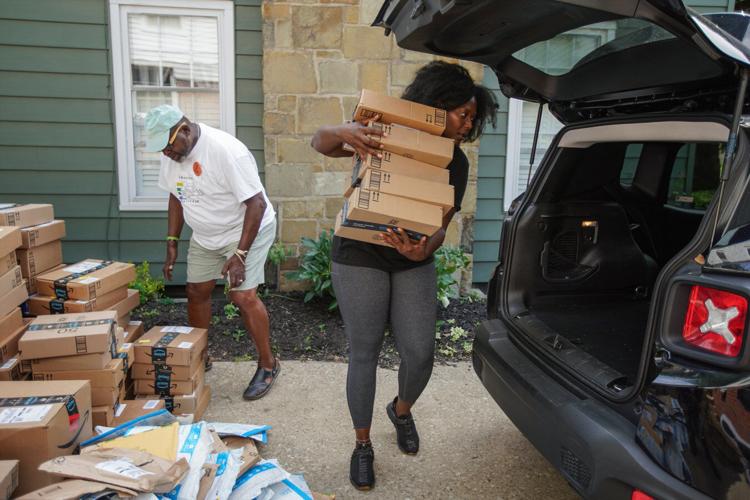 Zeneta Everhart and George Johnson load Everhart's vehicle with boxes of books in Molly Hirschbeck's driveway in Tonawanda on July 1, 2022. Everhart and her son, Zaire Goodman, started a book drive in the wake of the May 14 mass shooting at Tops Markets on Jefferson Avenue. The drive, which is focused on antiracist books, has resulted in between 8,000 and 10,000 books, Everhart estimated. The books will be held at Villa Maria College and distributed to schools and community centers. 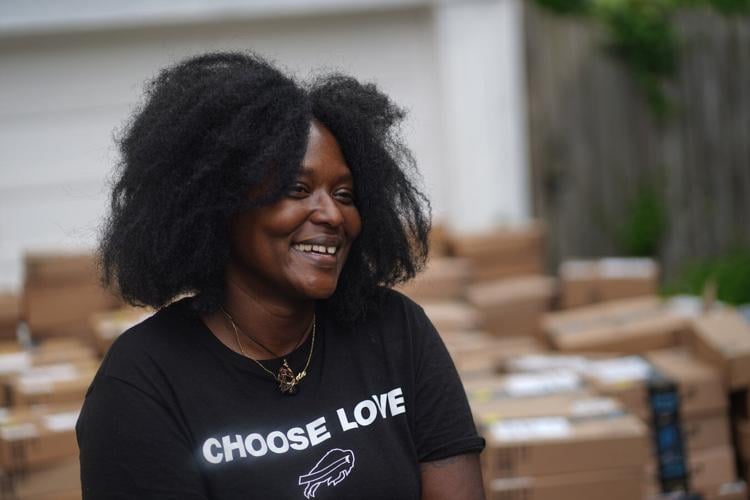 Zeneta Everhart addresses reporters regarding a book drive she started with her son, Zaire Goodman, in Tonawanda on July 1, 2022. 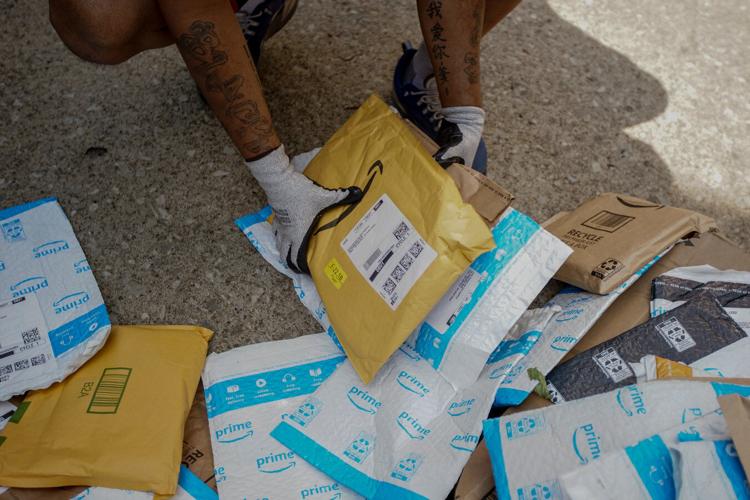 Luis Baez picks up packages of books in Molly Hirschbeck's driveway in Tonawanda on July 1, 2022.

Support this work for $1 a month
Maki Becker

Zeneta Everhart marveled at the mountain of Amazon boxes piled in the driveway of her friend Molly Hirschbeck's home Friday morning.

The boxes contained children's books about racism and diversity from donors across the country.

One month after the Tops massacre: 'We need time. We need love'

One month after the Tops shooting, a memorial ceremony was held Tuesday at the corner of Jefferson Avenue and Landon Street. The event was marked with 13 seconds of silence for the dead and wounded.

"I told you it was a lot," Everhart said to George Johnson of Buffalo United Front, who showed up to help her move the massive collection.

Zeneta Everhart tells Congress: 'I do not feel protected' from gun violence

Everhart, whose son was wounded in the May 14 Tops massacre, told a congressional committee that Congress must act on gun control – while the entire nation must act to counter white supremacy.

Everhart is the mother of Zaire Goodman, who survived the mass shooting May 14 at the Jefferson Avenue Tops Markets. A Tops employee, he was helping a customer with her groceries just outside the entrance when the gunman emerged from his car wearing combat gear and armed with a military-style rifle and fatally shot 10 people. Authorities say the gunman chose the location because he wanted to kill as many Black people as possible.

After the shooting, Everhart and her son started a book drive. They called it Zeneta and Zaire's Book Club, with a goal of collecting children's books that address racism, as well as Black history and culture. They started a wish list on Amazon.

They did not anticipate such a response.

The books include biographies of Harriet Tubman, Barack Obama, Simone Biles and John Lewis. An alphabet book is titled "A is for Activist." There is a book called "Curls" about Black girls' hair. A children's book called "Born on the Water" is based on "The 1619 Project." And an illustrated book called "Change Sings" is by poet Amanda Gorman.

Books arrived from all around the country, many with greetings.

Zaire Goodman, 20, survived a bullet through his neck and back Saturday afternoon while collecting shopping carts in the parking lot of the Tops supermarket on Jefferson Avenue.

"Thank you for working to encourage people to have race conversations at an early age. We need more people like you in the world," one donor wrote.

"Sending strength from a 4th grade teacher in Boston. What a beautiful thing you are doing," wrote another.

"What an amazing thing you are doing! Changing an incredibly horrible experience into an educational opportunity for so many! I'm a teacher from Texas and this is one of my favorite books. (Thank you) for what you are doing," another said.

A friend and fellow staffer at Sen. Tim Kennedy's office offered to store the books for Everhart. They soon filled her house.

On Friday, volunteers with the Buffalo Peacemakers helped transport the boxes to Villa Maria College, where Everhart went and her son now attends. The college will house the book club.

Forming a bucket brigade in the driveway, they filled Everhart's SUV, a minivan and most of a box truck.

"It's incredible to just look at it," Everhart told reporters. "Every time I look at it, it gets crazier and crazier. My heart is full. We're thankful and appreciative to everybody who donated all these books."

After the shooting, she said she felt a strong need to act.

"I needed something to do to try to make the world a better place," she said.

And that's how they came up with the idea of books for children.

"This project is about letting people know that it's real. It's real. Racism is real," she said. "It's time that we start talking about it, and it's time that we start educating our children about it. The reason for the terrorist attack in my community was racism. My son, along with 10 other Black people were targeted because of their skin color. In this country. It's ridiculous. It makes no sense ... And for me, it starts with kids and education."

The books will be distributed to libraries, community centers, day cares and homes "so parents can sit down and read books with their kids that have Black children in them," she said.

Goodman hasn't had a chance to see the giant stacks of books, his mother said. But he's seen photos and videos.

"Everyone sent all those books?" Everhart said her son asked, incredulous.

Her son wasn't able to participate Friday, she said. He was doing physical therapy, part of the recovery from his injuries. Goodman is healing well, physically and emotionally, she said.

The book drive has been a part of that.

After the racist mass shooting at Tops Markets on Jefferson Avenue on May 14, Zeneta Everhart and her son, Zaire Goodman, who was wounded in t…

'We must continue to fight': Garnell Whitfield joins Biden to mark passage of gun safety legislation

A day of hope, healing and support in East Buffalo: 'We're here for the long haul'

At Buffalo's Day of Hope and Healing, 3,000 backpacks, nonperishable food and health services were provided at Stanley Makowski Early Childhood Center, just blocks from where the Tops shooting occurred.

An ad featuring the mother of a Tops Markets worker who was wounded in the May 14 massacre at the Buffalo grocery store is one of two commercials released this week by Gov. Kathy Hochul’s campaign.

A federal grand jury now has 30 days to return an indictment against Payton Gendron of Conklin.

Those who lost loved ones in the massacre say they will be omnipresent activists for as long as it takes to reform the nation's gun laws and confine racism to history's dustbin.

The words of the witnesses from Buffalo seemed designed to sear the conscience, to break past the partisan divide on race and guns and find a place where all could agree that something should be done when Americans are getting gunned down in grocery stores and classrooms. But that divide remains.

Testifying on behalf of the Major City Chiefs Association, Gramaglia said the group favors a ban on the kinds of assault weapons and high-capacity magazines like those used by the shooter in Buffalo.

'You were elected to protect us,' Garnell Whitfield tells Congress, demanding action after Buffalo massacre

Former Buffalo Fire Commissioner Garnell Whitfield Jr., who lost his mother Ruth Whitfield in the Tops massacre, came to Capitol Hill Tuesday with a tough message for the U.S. Senate: White supremacy is a scourge that claims lives, and it's the job of lawmakers to do something about it.

Police commissioner heads to DC to testify on gun violence: 'We need to make our streets and communities safer'

"We need some change," Buffalo Police Commissioner Joseph Gramaglia said at Buffalo Niagara International Airport before flying to the nation's capital, where he is scheduled to testify before Congress on Wednesday.

Joseph Gramaglia and Zeneta Everhart will join witnesses from Uvalde, Texas, at a hearing of the House Oversight and Reform Committee at 10 a.m. Wednesday, the panel's chairwoman, Rep. Carolyn Maloney, announced Friday.

After Zaire Goodman survived the Tops Markets massacre, he and his mother, Zeneta Everhart, started a book drive to gather children's books ab…

Why do we use coins when they've lost their value?

Survey: Most Americans have a connection with someone with substance abuse disorder

Survey: Most Americans have a connection with someone with substance abuse disorder

Zeneta Everhart and George Johnson load Everhart's vehicle with boxes of books in Molly Hirschbeck's driveway in Tonawanda on July 1, 2022. Everhart and her son, Zaire Goodman, started a book drive in the wake of the May 14 mass shooting at Tops Markets on Jefferson Avenue. The drive, which is focused on antiracist books, has resulted in between 8,000 and 10,000 books, Everhart estimated. The books will be held at Villa Maria College and distributed to schools and community centers.

Zeneta Everhart addresses reporters regarding a book drive she started with her son, Zaire Goodman, in Tonawanda on July 1, 2022. 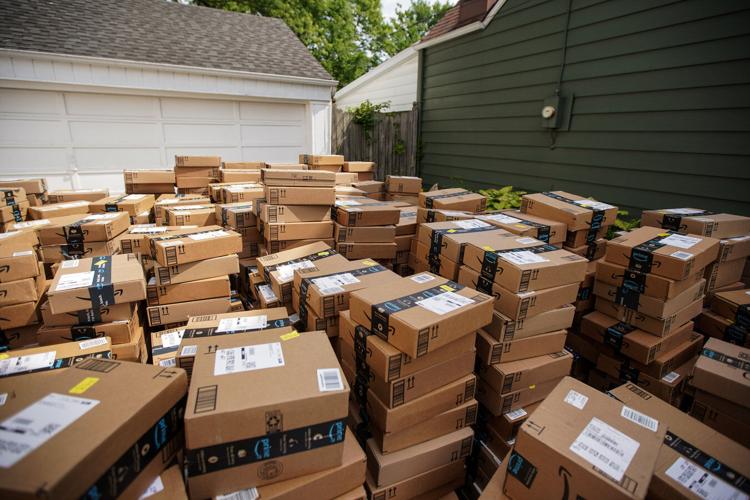 Boxes of books sent for Zaire Goodman and Zeneta Everhart's book drive are stored in Molly Hirschbeck's driveway in Tonawanda, N.Y., July 1, 2022. The drive, which is focused on antiracist books, has resulted in between 8,000 and 10,000 books, Everhart estimated. The books will be held at Villa Maria College and distributed to schools and community centers. Libby March / Buffalo News

Luis Baez picks up packages of books in Molly Hirschbeck's driveway in Tonawanda on July 1, 2022. 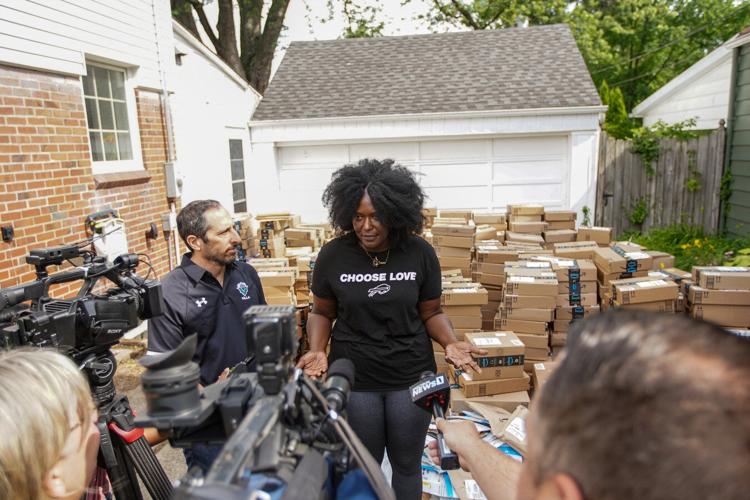 Zeneta Everhart addresses the media regarding a book drive she started with her son, Zaire Goodman, in Tonawanda on July 1, 2022. Everhart and Goodman started the book drive after the May 14 Tops shooting. The drive, which is focused on antiracist books, has resulted in donations between 8,000 and 10,000 books, Everhart estimated. The books will be held at Villa Maria College and distributed to schools and community centers.