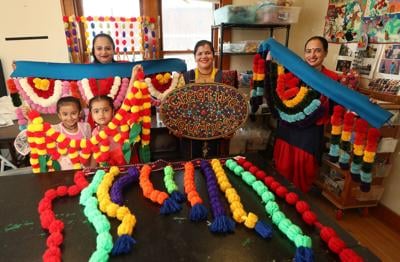 Bright colors are inseparable from Nepali culture. Vibrant shades of red, especially, adorn the clothing of women and monks, while Nepal's national flag and flower are both red.

Attention-grabbing hues imbue home decorations, like the door hangings that will be on display at Stitch Buffalo's art exhibit, which opens Saturday at the Buffalo History Museum.

Tila Bastola and sisters Saraswati Tiwari and Tika Bhattarai – three Nepali textile artists at Stitch, a nonprofit at 1215 Niagara St. – agreed door hangings are far from an American welcome mat; they grace door frames of every room in a Nepali house, even the bathroom.

Dawne Hoeg, the founder and executive director at Stitch, once offered American pompom makers to ease the process of crafting these door hangings, but she was quickly rebuffed.

"No no, no pompom makers," Tiwari remembered telling Hoeg. "We like to do it our way."

The Nepali way, which takes three to four hours for a finished product, involves a technique called finger-wrapping, where yarn is formed by hand into balls that resemble flowers, like marigolds, Tiwari said. If there's one area where the Nepali women deviate from tradition, it's perusing YouTube for design ideas.

Bastola has been part of Stitch since its first meeting in 2014 and remains an eager participant in the refugee women's workshop, two narrow rooms behind the retail section that make up a hodgepodge of sewing machines, cutting boards, materials, tables and narrow walkways. It's intimate, cluttered and a little chaotic – but still a creative, communal environment.

"The foundation is creativity – it's not political, it's not religious – it's creativity," Hoeg said.

An exhibit of celebration

Stitch Buffalo's work and support of the refugee community dovetails with a renewed energy at the museum, sparking the launch of "Creative Journeys: Celebrating the Art of Refugee Women in Western New York." The exhibit, which opens with a hands-on embroidery workshop and artist meet-and-greet from 10 a.m. to 2 p.m. Saturday on the museum's second floor, runs through Aug. 20. Admission is free.

Hoeg connected last year with Melissa Brown, executive director at the museum, at the Erie County Bicentennial launch, forging a friendship that has now bloomed into a partnership.

The exhibition – highlighting items either sewn, woven or embroidered – incorporates more than just the work of Nepali natives. Forty-four textile artists are featured, with the majority natives of Burma, from where 10,000 refugees have come to Buffalo in the past decade. A spokesperson for the museum emphasized the importance of their stories in the larger narrative of Buffalo's history.

"We tell the full Buffalo story and how our history continues to be made," said Brian Hayden, the History Museum's director of communications. "We want to make sure we celebrate the diverse populations from all over the world that have already contributed so much to our city."

"Going to the Buffalo History Museum is a big deal," said Hoeg, citing the opportunity for refugee women to move beyond the workshop's walls and see their work displayed.

The rise of Stitch

Stitch's fleet of artisans is considered "consigners," Hoeg said, with the aim of making money from textile art they create, ranging from decorations to jackets to shawls to small gifts. Almost all the money from goods sold out of the storefront goes back to the consigners themselves, not Stitch as a whole.

"We give the foundation for various projects, but they have total creative freedom," Hoeg said of the consigners. "They can choose their colors, choose their design, if they want beads or not; are they going to do applique?"

As overseer, Hoeg – who's worked as a professor and teacher of textile arts at SUNY Buffalo State College and Aurora Waldorf School – trusts her expertise in understanding consigners' skills and suggesting their best route to selling goods. She noted Buffalo seems to offer refugees the most opportunity in the culinary field, but other skill sets – of which refugees bring many – have much more difficult paths to joining the workforce.

"Refugees can learn the skill of industrial sewing machines, and that gives them a skill for workforce development," said Hoeg, who said a background in textiles is not necessary.

Fueled by Hoeg's energy and volunteer support, Stitch's growth has been rapid. What began as a community project in 2014 at the Concerned Ecumenical Ministries building evolved into an official nonprofit in 2017, then Rich Products' donation of the building at 1215 Niagara St. landed Stitch its first storefront the following year. Now, Stitch has outgrown its space, with the basement and second floor filled with supplies, and precious little space for consigners to work in the rear of the building.

The Stitch founder envisions a larger space where industrial sewing machines can remain out on tables for longer access, with studio space for tables dedicated to cutting fabric and a wet space for printing and dying.

"We're pushing on the seams of this building, and now we're trying to figure out that next leap, which will be that fully functioning textile arts center," Hoeg said.

As much as it is a space for creating and selling textiles, Stitch doubles as a chance for community building. That's the case for Munawara Sultana and Palwasha Basir, two refugee women from different countries who have formed a friendship through their work.

Sultana came to Buffalo from Pakistan, where she owned a business that sold artisan goods. She learned to sew from her mother, but also has a passion for traditional hand-printing, using natural dyes on jackets, shirts, tunics and unisex shawls. Her style of block print is traditional Ajrak, which dates to the beginning of civilization in the Indus Valley, she said.

She's excited by the role reversal from her home country – "I'm the creative people now," she said – but is also grateful for Stitch's willingness to help her adjust to America after three months at Vive, an asylum seekers shelter managed by Jericho Road Community Health Center. In the nine months since, Sultana has learned to manage her own finances and isn't intimidated by a bank.

Her friendship with Basir, a native of Afghanistan and talented tailor, has made Fridays at Stitch more enjoyable. Hoeg is encouraged by their interactions, which seem to brighten the space. "They just talk – they share a lot of the same interests and the same language."

The community is meaningful to Sultana, who feels a sense of belonging.

"I didn't plan to stay here, but I love this place," Sultana said. "As soon as I stepped into Stitch I said, 'This is my home.' "

"We are heartbroken," Mayor Byron W. Brown said. "We are in pain right now."

Daniel D. Kachinoski, 40, of Chester Avenue, was shot and killed by an officer after Town of Niagara police responded to a domestic incident at the house around 8:45 p.m. where he, his mother and his son lived. 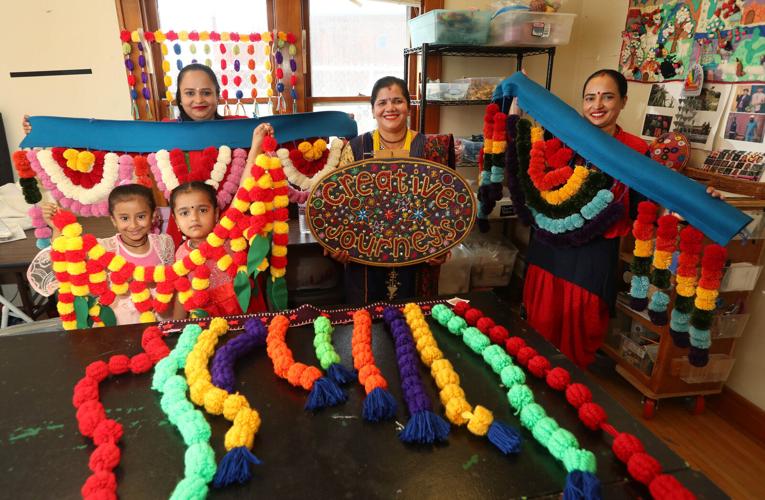 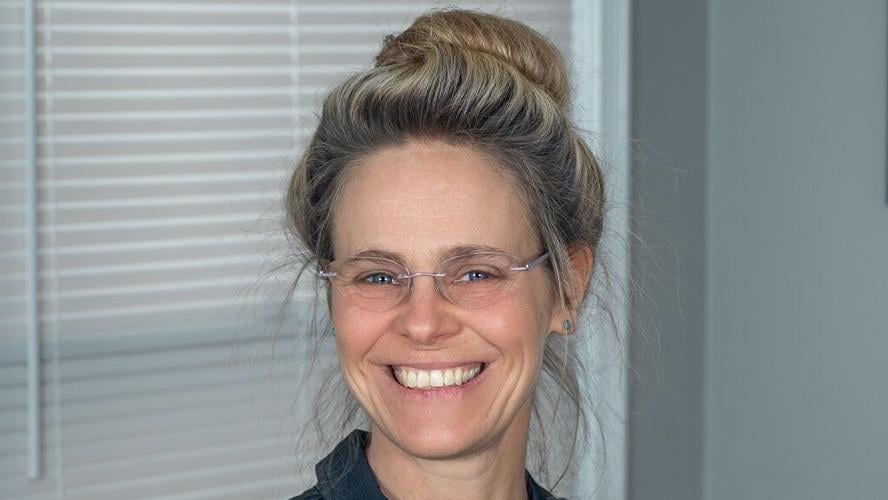 Dawne Hoeg is the founder and executive director for Stitch Buffalo. 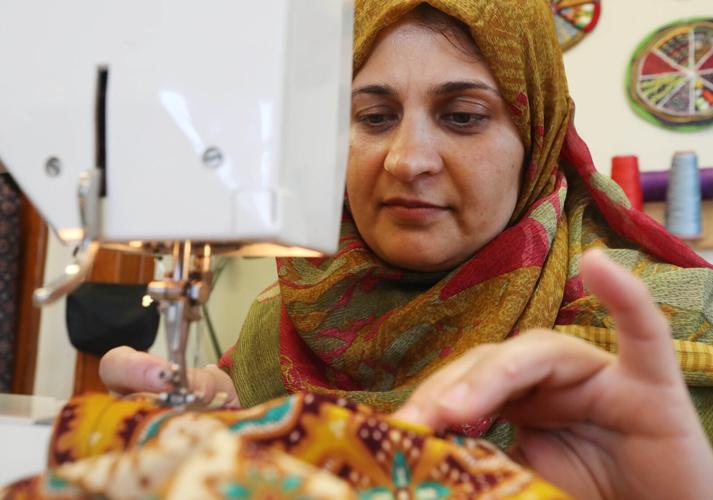 Palwasha Basir, a tailor from of Afghanistan, works on shirts she's been commissioned to make. 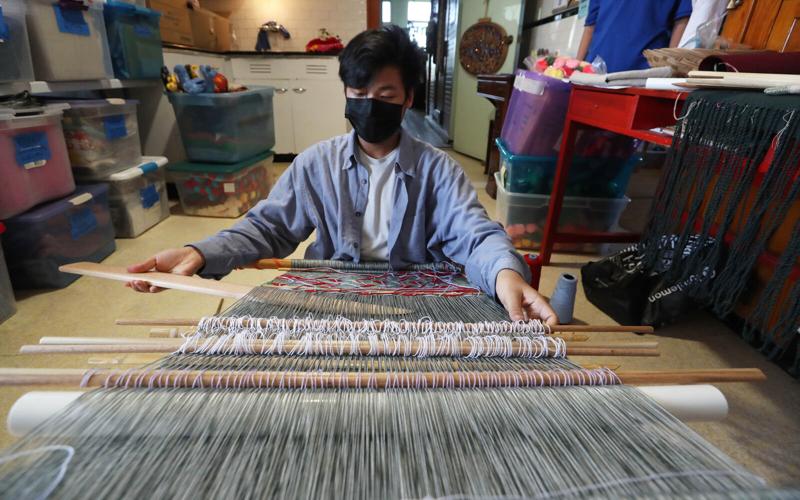 Steven Tee, a SUNY Buffalo State student whose parents are from Myanmar, makes a scarf on the backstrap loom, a textile tradition of the Karen people.