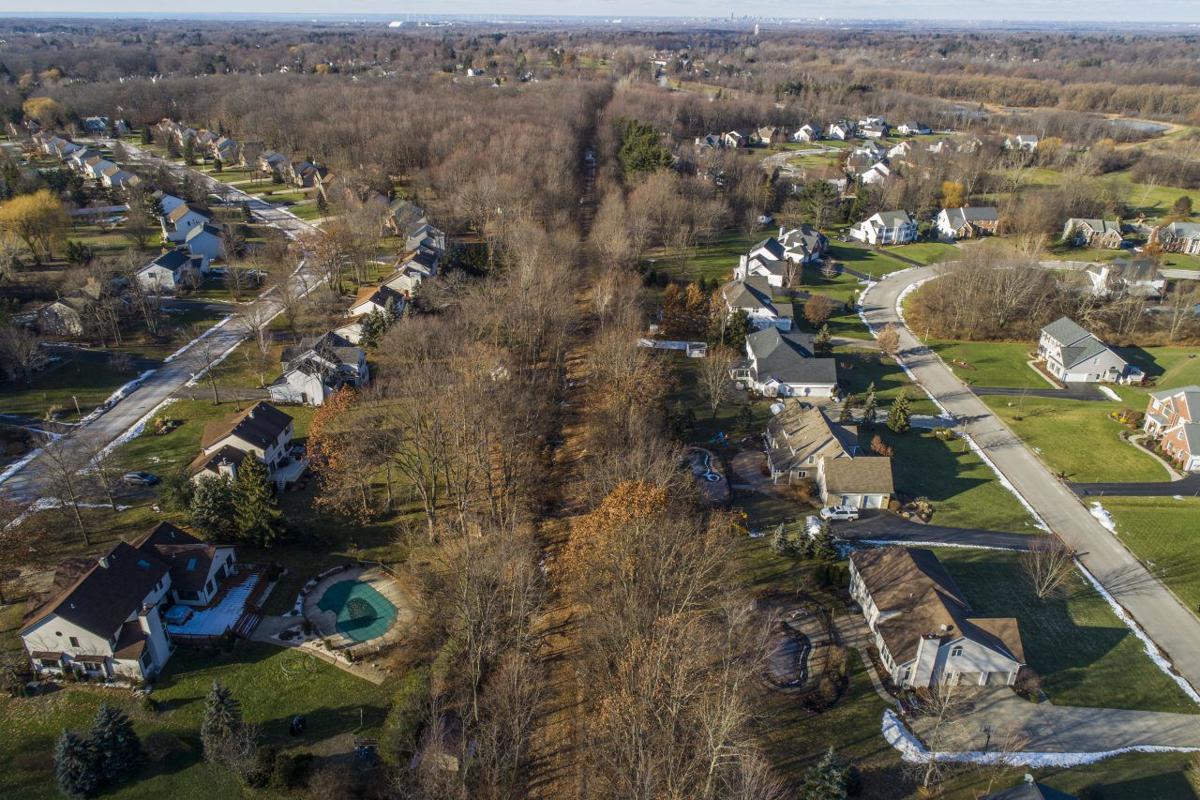 A former rail bed that runs between two neighborhoods in Orchard Park is planned for a Rails to Trails conversion. Some residents on Curley Drive, left, and Deer Run, right, are opposed to the plan. (Derek Gee/Buffalo News) 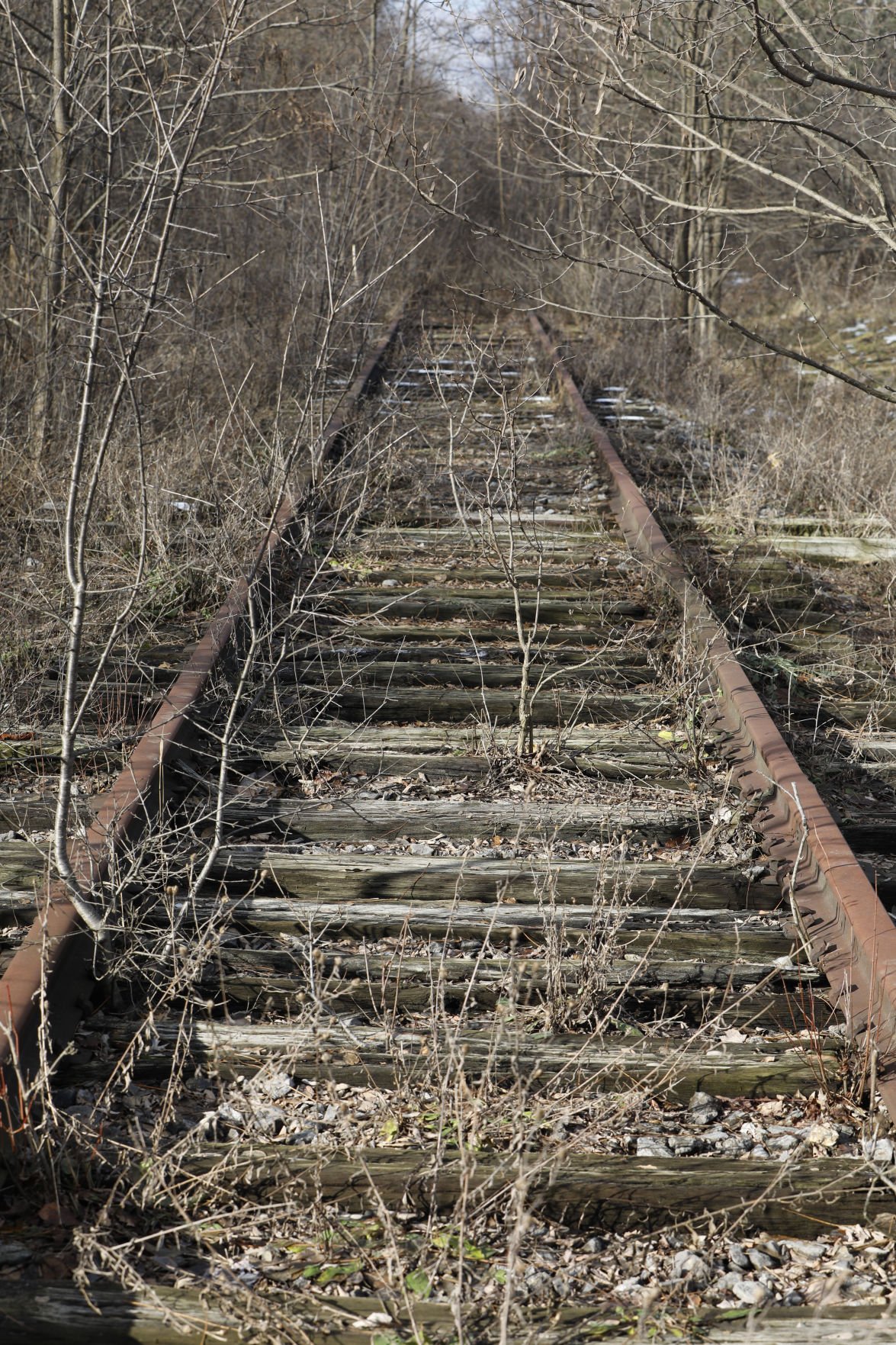 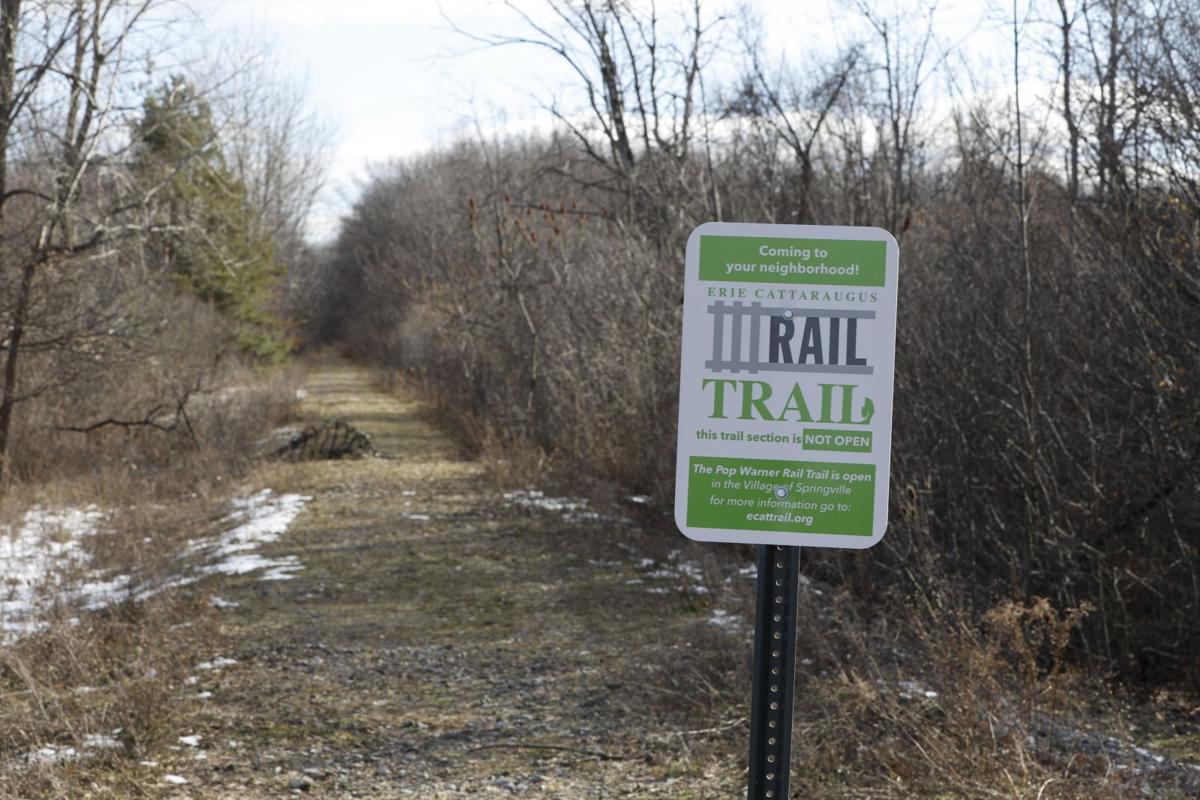 This former rail bed off of Jewett Holmwood Road in Orchard Park is planned for a Rails to Trails conversion. (Derek Gee/Buffalo News)

There was nothing but delight and applause on a simmering August day last summer when the Erie Cattaraugus Rail Trail group announced a 49-year agreement that would allow the development of a 27-mile-long trail along an old rail line from Orchard Park to Ashford.

But not everyone was smiling.

From upscale subdivisions near the beginning of the trail in Orchard Park, to rural landowners in Aurora down to Ashford, many who live next to the proposed trail are against the project.

Opponents may bristle at the NIMBY (Not In My Back Yard) moniker, but for some, it is in their backyard.

Sandy Artim and her husband built a house on Curley Drive in the Independence Heights subdivision 30 years ago.

"When we built the house, we signed up for the tracks," she said. "That's one of the reasons we moved here."

But now that the Buffalo-Pittsburgh Railroad has granted a 49-year lease, with five 10-year extensions built in, to the nonprofit Erie Cattaraugus Rail Trail, Artim is rattled. There used to be about two trains a day going down the tracks. Now, she and neighbors are envisioning trail hikers and bikers peering in their windows and backyard swimming pools.

While trail advocates have been working more than a decade to get the right of way, it is less than six months since the easement agreement was signed. The trail group is in the process of selecting a design firm, which will get into the specifics of each property owner's concerns, said Deborah Fenn, co-chairwoman of the trail board.

"They're mostly concerned, as they should be, with privacy and security," Fenn said of property owners. "Any successful trail takes into consideration people's concerns."

She said the trail group wants to meet with individual property owners, and visit their properties to understand specific concerns.

"It's real important to visit with people one-on-one," she said.

While there are residents who are looking forward to the trail, there also is vehement opposition.

"We’re saying it's not the right area to do this," said Carolyn Coppola, who lives on Highbrook Court in Eagle Heights subdivision. "Right now, it’s a trail to nowhere."

Four towns came out against the trail 10 years ago: Aurora, Colden, Concord and Ashford. The Town of Orchard Park passed a resolution"strongly" supporting the trail in 2008. But in light of opposition from residents in the upscale Eagle Heights and Independence Heights neighborhoods, the board is assessing potential impacts.

"The world in 2008 is a lot different than today," Keem said. "When those people bought the property, no one told them there was a rail trail going through there."

The Town Board has asked eight committees or groups in town to assess everything from economics to the impact on development to public safety. It also plans to hold several public forums for proponents and opponents to make presentations and answer questions, poll the community, and adopt a resolution on the board's position in February or March.

The Erie Cattaraugus trail starts on Bank Street, in the Village of Orchard Park, and travels along the rail line for about 3 miles in the Town of Orchard Park. It ends outside the West Valley Demonstration Project in Ashford, in Cattaraugus County.

Concord Supervisor Clyde M. Drake said the Town Board is neutral on the project today. When the board came out against it in 2008, there were concerns that property owners along the trail have a voice, and about first responders having proper equipment to handle emergencies on the trails, he said.

"I got more people from out of town saying they were for it. I guess it's nice if it doesn't run through your backyard," Drake said. "It's got to be done right."

Aurora Supervisor James J. Bach said the town won't support the trail until the issues of property owners abutting the trail are mitigated.

"I want to make sure these residents are in the process," Bach said.

The last train went down the tracks in 1996. The area is a "private, secluded, wooded area with no crime now," Coppola said. She said a survey of the neighborhood 10 years ago found 90 percent were opposed to the trail. Preliminary results of an updated survey are showing the same results, she said.

"We’re all for preserving land and trails. We feel this is not the right area," Coppola said.

There are two other trails in the town, in the Birdsong and Chestnut Village developments, and other rails to trails in the region and across the country.

"Why does it work in other places?" Erie Cattaraugus Rail Trail board member Howy Holmes said. "There's trails all over, and they work."

Fenn said the trail group wants property owners and municipalities involved in the planning. For instance, many homeowners don't want motorized vehicles and snowmobiles on the trail, and that is the type of input the trail group seeks from communities.

"The pulse we feel now in Orchard Park is snowmobiles will not work," Homes said.

The average width of the right-of-way is 66 feet, although the path itself would be 8 feet to 10 feet wide, Fenn said. The type of surface has yet to be determined, and will be one of the many details to be considered in the design process, she said.

It's an ambitious project that will cost millions of dollars to finish, although a specific cost estimate was not available. There are a number of culverts along the way that need to be repaired, and it could cost $100,000 to inspect the trestle over Cattaraugus Creek, Fenn said. The group also has to remove the rails from Bank Street to Jewett Holmwood Road.

But the group hopes to be able to mow the grass and have parts of the trail open by next summer. The trail will be open from dawn until dusk.

Concern about security and property values are typical, but the Town of Tonawanda has found its rail-to-trail very popular since it opened two years ago.

Crime on the trail has not been a major issue, according to Town Engineer James Jones.

"It's actually made the community stronger, he said. "Neighbors go out and talk to each other."

He said some realtors market a property's proximity to the trail.

The trail runs right through most of the archery and trap shooting ranges at the West Falls Conservation Society. The club, with more than 300 members, has been around for more than 70 years, and has a number of programs for youth on its more than 50 acres. But if the trail, which is elevated at that point, is developed without changes, it would mean the end of the club, said president Jack Bouquin.

The conservation society is not opposing the trail for now, and is in favor of outdoor recreation, he said. The two sides are talking, said Fenn.

"We are looking for a way for us to still survive and for them to go around us so we can," Bouquin said.

Part of the trail is already open. The 1.7-mile section in Springville, the Pop Warner Rail Trail, opened two years ago after the village secured a right-of-entry agreement with the railroad to allow development of the trail, which cuts a diagonal line across the village.

"We really believe it's a wonderful thing for our community," Fenn said.

The final pieces of the budget, which was due by March 31, are still under negotiation, but officials are banking on legalization of mobile sports betting to be in it to help finance massive spending hike desires.

A former rail bed that runs between two neighborhoods in Orchard Park is planned for a Rails to Trails conversion. Some residents on Curley Drive, left, and Deer Run, right, are opposed to the plan. (Derek Gee/Buffalo News)

This former rail bed off of Jewett Holmwood Road in Orchard Park is planned for a Rails to Trails conversion. (Derek Gee/Buffalo News)