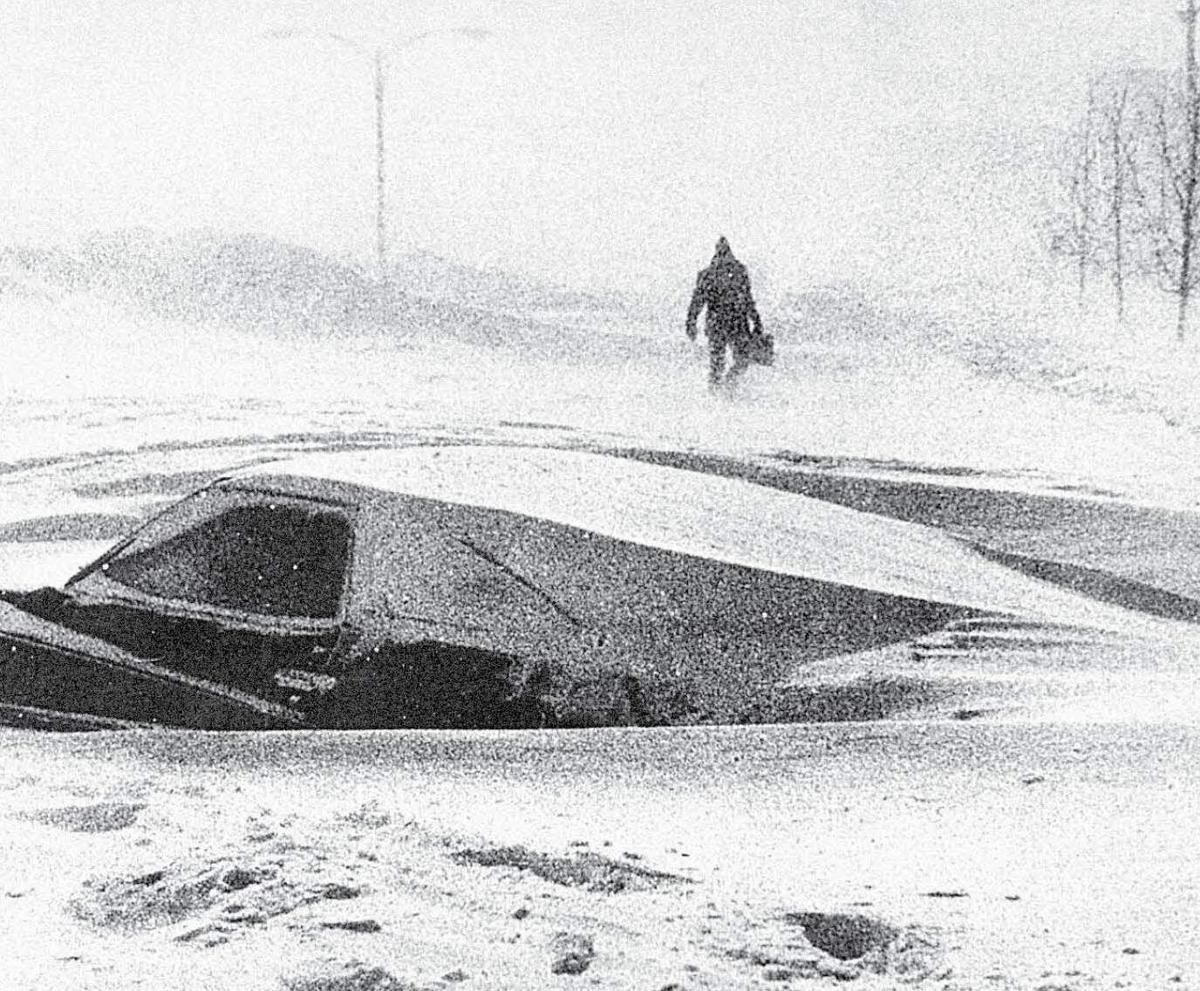 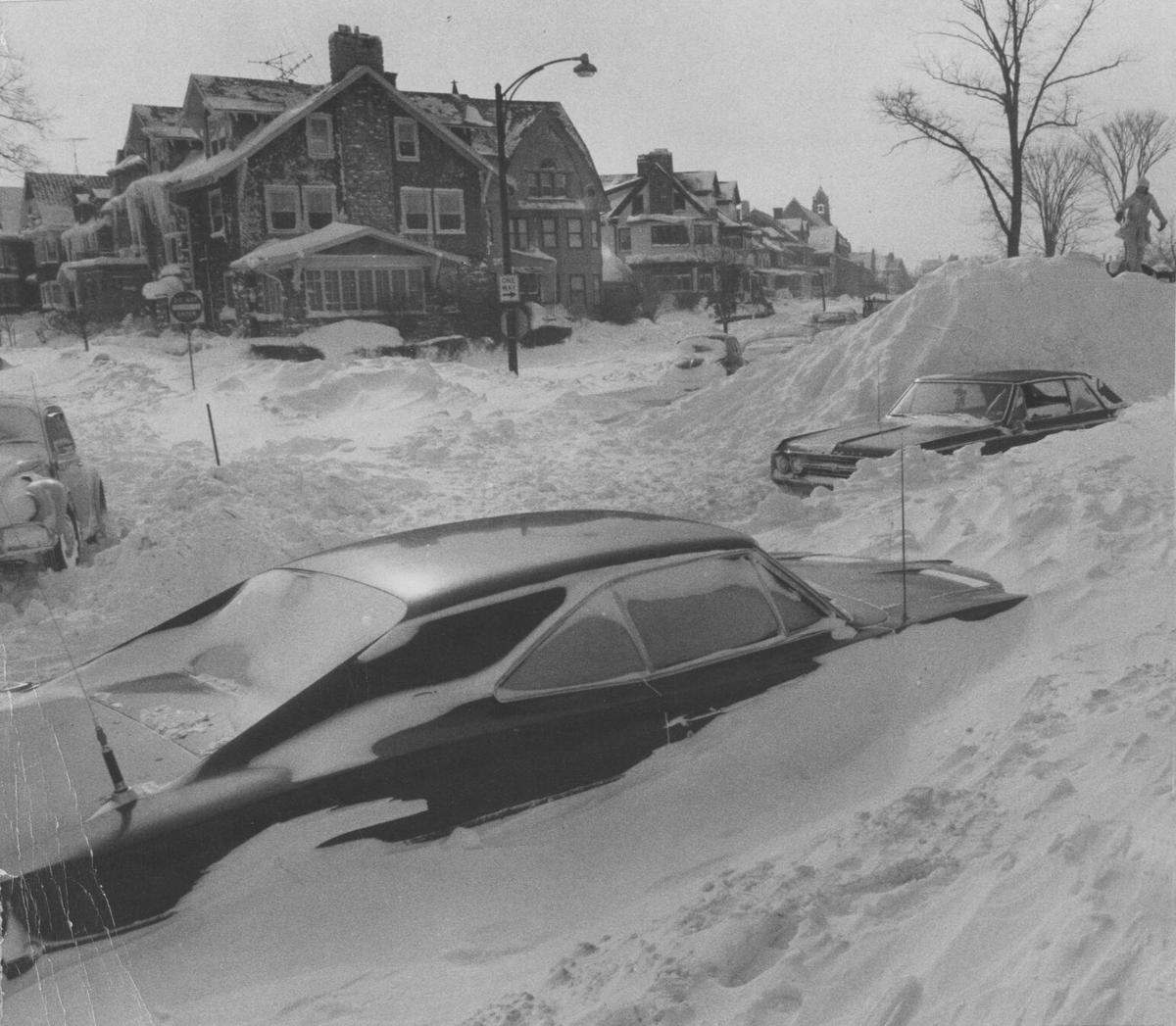 Cars remain snowbound at the intersection of Bidwell Parkway and Ashland Avenue, near Elmwood Avenue. Roads across Buffalo were made impassable by huge snowdrifts. (News file photo)

The experts knew a big storm was brewing. Little did they know how crippling it would be.

The evening before, on Thursday Jan. 27, 1977, the National Weather Service issued some kind of winter storm warning, aware that severe winds were barreling toward Western New York, ready to unleash their power on a few inches of fresh snow falling on top of a huge existing snowpack.

But overnight, heading into Friday the 28th, conditions turned harsher than the models had predicted:

Meteorologists didn’t learn until mid-morning Friday how bad the storm would be. According to three different sources, the weather service issued a blizzard warning somewhere between 9 and 11 a.m., not long before the brunt of the storm struck at 11:35 a.m.

But that was too late, after a few hundred thousand local residents already had headed for work.

[Gallery: The Blizzard of '77 in the Buffalo Evening News]

All those weather forces combined to paralyze Western New York and Southern Ontario for five days, Jan. 28 to Feb. 1, and up to a couple of weeks.

A few facts show how badly the blizzard crippled the region: The storm killed 29 people, at least nine of them buried in their cars. An estimated 10,000 to 15,000 people never made it home that first night. And some school districts didn’t reopen their doors for more than two weeks, until Feb. 14.

It became, and will always be known simply as, the Blizzard of ‘77, a storm so freakish that it’s considered a roughly 200-year weather event.

“I’d be shocked if we got another storm to compare to the Blizzard of '77 in my lifetime, in my kids’ lifetime or even in their kids’ lifetime,” said meteorologist David H. Sage, now retired after a 40-year National Weather Service career that started in 1970.

Sage has seen all the ingredients of the 1977 blizzard before and since, but not all mixed together simultaneously in the same deadly stew.

“We’ve had snowpacks of over 30 inches several times,” the 66-year-old Sage said. “We’ve had lengthy sub-freezing temperatures, for up to a month, many times. We’ve had wind gusts over 60 mph many, many times. And we’ve had them all happen frequently.

The blizzard turned a cliched metaphor into reality. It truly was the perfect storm.

Oddly enough, the one thing missing in the Blizzard of '77 was a huge snowfall. This was absolutely nothing like the double-lake effect snowstorms that dumped nearly 70 inches of snow on parts of the Southtowns in November 2014.

In fact, one of the most astounding facts from 1977 was the total snowfall of 12.3 inches over five days.

Sage emphasized repeatedly during an interview that the big blizzard was at least a full month in the making, not merely a result of a few days of rough weather.

Here are the storm’s main elements:

The massive amount of snow on the ground and on Lake Erie. Before the 1976-77 winter, the National Weather Service’s record for snowfall in any month was 54.2 inches in February 1958. That record was crushed two months in a row, with 60.7 inches in December 1976 and 68.3 in January.

The long cold snap. The Buffalo area went 45 days, starting on Dec. 26, 1976, with continuously below-freezing temperatures. The average daily temperatures dipped to 22.0 degrees in December and 13.8 in January, both well below average.

An entirely frozen lake. The eastern end of Lake Erie froze on Dec. 14 that season, roughly a month before normal.

The absence of the normal thaw-freeze winter pattern that usually yields the hardened “snow-crete,” the term for snow that seems as hard as concrete. “Because we didn’t have that, most of the record snowfall we had in January prior to the blizzard was all basically loose snow,” Sage said. “That’s important, because when those 69 mph gusts hit, you had all that snow on land and all that loose snow on the lake that became fuel for the blizzard.”

That blowing snow had to land somewhere, and it created massive drifts, one of the signatures of that blizzard.

“There was talk about drifts being so high that in some places it went up to the telephone wires,” recalled Richard K. Sheffield, who was on duty in the National Weather Service office for about the storm’s first 24 hours. Those drifts, estimated by some at 30 to 40 feet high, blocked many people from opening their homes’ entrance doors and allowed some people to walk on packed snowdrifts higher than the roofs of cars.

Whenever a massive snowstorm hits Buffalo, meteorologists, reporters and even the public scramble to define whether we’ve had a true blizzard. The 1977 version wasn’t a close call.

The National Weather Service defines a blizzard as a storm with large amounts of falling or blowing snow, winds above 35 mph and visibilities of less than a quarter-mile for at least three hours.

Forty years ago, the region had a 33-inch snow depth, winds ranging from 46 to 69 mph and zero visibility for 13 hours.

“We smashed all the criteria for a blizzard,” Sage said.

So why was Western New York left so unprepared? Why were tens of thousands of people stranded that Friday afternoon?

People have to remember that this occurred 40 years ago, when weather models weren’t so sophisticated. But more importantly, long before the age of tweets and texts and emails and phone apps, local residents got their instant weather news by turning on the radio or television. So when meteorologists learned at various times Friday morning how massive the storm would be, it was too late to stop people from heading off to work.

“We put out a winter storm warning, mainly due to the visibility and the winds, but we didn’t envision just how bad it would get,” said Sage, who was trapped at home for most of the 1977 blizzard, having left work at 4 p.m. the day before. “I think we all underestimated the effect of the loose snow on the ground and on the lake. We pictured a terrible winter day, but we didn’t realize what that wall of snow would do, how bad it would be.

“And we certainly didn’t predict people being trapped in their cars or dying.”

Even 40 years later, Sage, the veteran of decades of Buffalo’s harsh winters, remains awed by that storm.

“The type of impact, and how long the impact lasted, I’m still amazed.”

Judge: ECMC must honor Benderson lease, despite objections to doughnuts and rent

Last year, ECMC sent a notice to Benderson telling it to “quit and surrender" the leased space by Dec. 16, prompting Benderson to seek a court injunction.

Cars remain snowbound at the intersection of Bidwell Parkway and Ashland Avenue, near Elmwood Avenue. Roads across Buffalo were made impassable by huge snowdrifts. (News file photo)