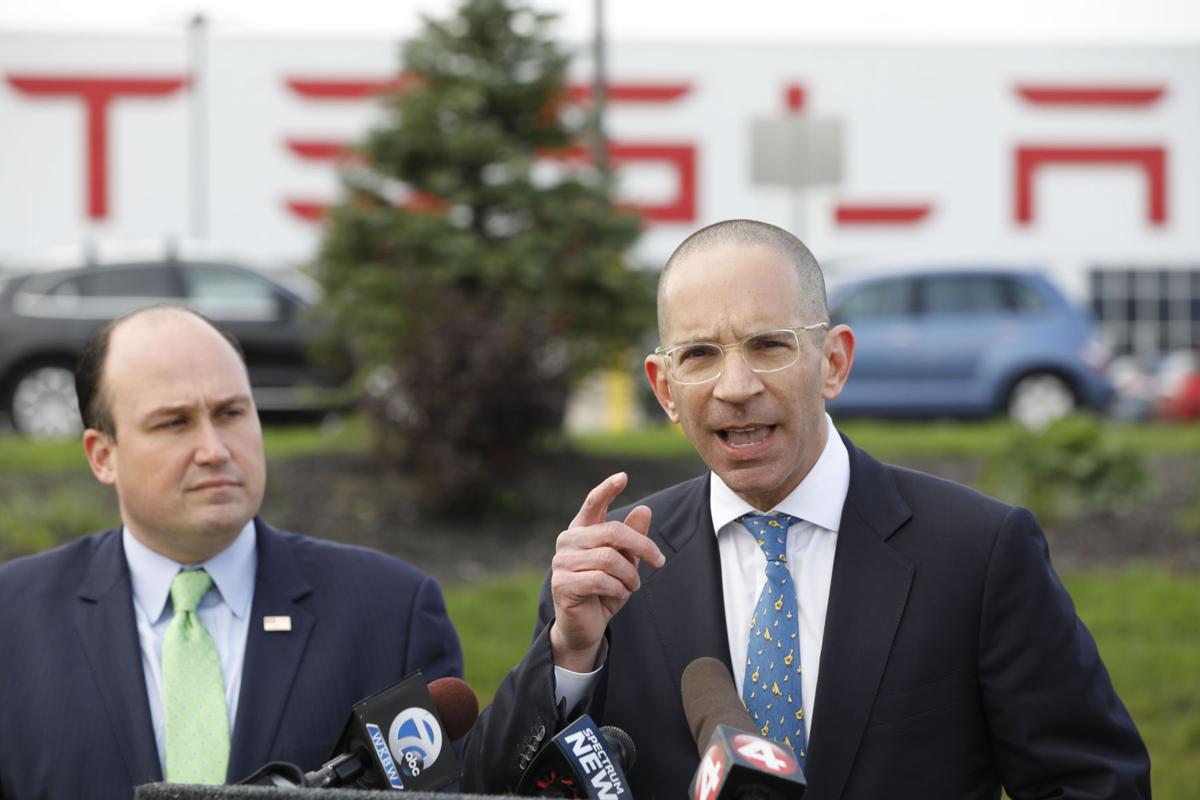 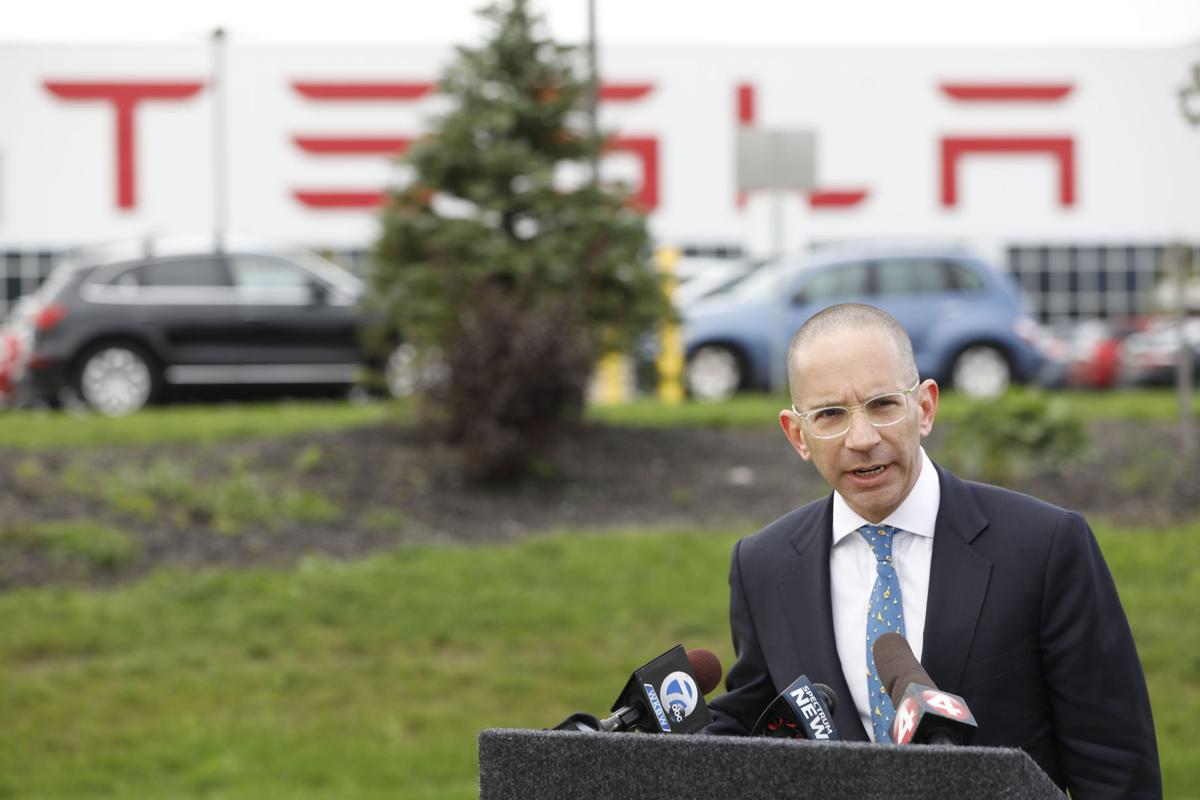 Jonathan Trichter, the GOP candidate for state comptroller, uses the Tesla plant on South Park Avenue as a backdrop to criticize an alleged lack of oversight of the Buffalo Billion initiative. (Derek Gee/Buffalo News)

This year’s campaign trail for statewide challengers seems to lead directly to the Tesla plant in South Buffalo.

Republican comptroller candidate Jonathan Trichter on Monday became the latest to stage the sprawling solar panel manufacturing facility as a backdrop, repeating a now familiar mantra that labels the state’s $750 million investment there a failure. Trichter stood on familiar turf to tell reporters that incumbent Democratic Comptroller Thomas P. DiNapoli failed to properly oversee the flow of state funds into nonprofit entities connected to the State University of New York.

He follows Cynthia Nixon, the unsuccessful candidate for governor in the Democratic primary; GOP gubernatorial challenger Marc Molinaro; and Stephanie Miner, the Serve America Movement candidate for governor. All went to the site to raise questions about the state’s Buffalo Billion economic development plan, and question whether its $750 million was justified.

Trichter joined the Tesla parade on Monday to label DiNapoli a “career politician” unwilling to challenge Gov. Andrew M. Cuomo’s signature economic development program for upstate New York. He dismissed the “conventional wisdom” that DiNapoli had been stripped of his authority to oversee many of the state’s economic development programs, and claimed the incumbent could have used other powers to uncover the bid-rigging that eventually led to criminal convictions in Cuomo’s inner circle.

“That conventional wisdom and narrative is a falsehood,” Trichter said, charging no audits ever touched on the SUNY-connected entities.

Trichter, an investment banker and public finance expert, has in recent years helped statewide candidates like Harry Wilson (the 2010 GOP candidate for comptroller) as well as several Democrats. But now he faces an uphill battle in taking on DiNapoli in Democratic New York, and is attempting to paint the comptroller as often in league with the governor – even though most Albany observers hardly consider them allies.

Like the other challengers before him, Trichter faulted the Tesla project as “failed economic development spending that led to corruption or incompetence without the promised job creation included.” He predicted the 3,000 jobs promised by the state after its $750 million investment would never materialize (though state officials say initial job hiring targets have been reached).

He also faulted similar projects sponsored by the state in Syracuse that he said were designed to “elude the state’s normal accountability measures.”

At his first Buffalo event of the campaign, Trichter focused on the comptroller’s responsibility to monitor economic development projects despite DiNapoli’s insistence that the governor and Legislature have excluded him from the process.

“He complained only moderately about it,” he said.

Trichter to take on DiNapoli for state comptroller

DiNapoli has in the past pointed to bills he has submitted which would restore powers he once held to review economic development spending that were viewed by the governor and Legislature as cumbersome. DiNapoli spokeswoman Jennifer L. Freeman on Monday said those controls would go a long way toward preventing the bid-rigging situation that eventually plagued the Tesla construction.

"State Comptroller DiNapoli has put forward real solutions to fix these problems, not made empty promises,” she added.

Nixon voiced her opposition to Cuomo’s economic development plans in August, when she also stood outside the plant to outline her plans during the primary campaign.

Last month, Molinaro took his lectern to South Park Avenue and the Tesla plant to call the project “overpromised and underperforming.” He was also quick to link the bid-rigging convictions against local executives involved in its construction with a Cuomo administration that he said looks the other way.

Miner used the same approach earlier this month, when she said the state’s approach is to “pick winners and losers” instead of investing in infrastructure and other services to support business.

“This, to me, is the worst kind of investment of public resources,” she said, labeling the state’s Buffalo Billion-sponsored solar panel factory as “born in corruption, mired in costs, and an inefficient way to spend $750 million.”

Jonathan Trichter, the GOP candidate for state comptroller, uses the Tesla plant on South Park Avenue as a backdrop to criticize an alleged lack of oversight of the Buffalo Billion initiative. (Derek Gee/Buffalo News)