With Tesla opening a solar panel factory in 2017 and a solar-powered carousel in the works at Canalside, it seemed only a matter of time before the interests of the two converged.

Tesla agreed to donate a solar roof to power the Buffalo Heritage Carousel, scheduled to open in the spring. The textured black tiles are being made at the company's RiverBend plant in South Buffalo. Each of the tiles will be stamped, "Assembled in Buffalo, NY, USA."

"With the support of Tesla, this rare and historic carousel will be powered by the sun and offer a new family recreational and educational attraction located along the boardwalk," said Laurie Hauer-LaDuca, president of Buffalo Heritage Carousel.

"We are so proud to be a local showcase for the solar roof tiles that are 'made in Buffalo, New York,' " she said.

Assemblyman Sean Ryan, who helped jump start the carousel project by providing $600,000 in state funds toward the restoration, had urged Tesla to get involved with the carousel.

"This winter, I discussed the Buffalo Heritage Carousel project with the people at Tesla and told them it would be a great demonstration of a product made in Buffalo," Ryan said. "I'm so glad people will get to see the fruits of their taxpayer investments – a beautiful carousel powered by a solar roof made three miles down the road."

Tesla has kept a low profile when it comes to local corporate giving. A company representative declined to comment.

The donation – and another that Burger said will be announced soon – leaves the nonprofit $950,000 shy of its $5.8 million goal, which includes the establishment of a $250,000 endowment.

The octagonal roundhouse, designed by eco_logic STUDIO, will house a vintage, park-style menagerie carousel manufactured in 1924 by Spillman Engineering Co. in North Tonawanda. Officials report steady progress on construction of the building, by the boardwalk behind Clinton's Dish, since work resumed after a coronavirus-related shutdown.

Riding a vintage carousel at Canalside will have to wait until next May due to construction delays resulting from Covid-19. But helping build a 19th-century packet boat at the Longshed building, now due to be completed in September, appears possible by the end of the year. “The good news is they are back and moving,” said Steven Ranalli, president

The carousel remains on track to open Memorial Day weekend.

In addition, the Allan Herschell Company is replicating the original factory horseshoes and stirrups, and jewels and horsehair tails will soon be installed.

Tesla's efforts to lower the price and speed up the installation of its Buffalo-made solar roof appears to be succeeding.

The Editorial Board: It seems to us – Sun power at Canalside, pilfered apples in Youngstown and 43North’s muscle

One of the most exciting prospects for the continued success of Canalside, Buffalo’s waterfront district, is the plan to put a historic carous…

The pandemic hasn't put a damper on fundraising for the carousel coming in May to Canalside.

The largest of the six awards announced by the Buffalo and Erie County Greenway Standing Committee went to the Buffalo Olmsted Parks Conservancy, which received $500,000 to reconstruct pathways and replace benches at Prospect Park on the West Side.

The 1924 attraction is being assembled at Canalside's Central Wharf and will open May 28.

The $4 million multisided roundhouse, with glass partitions between wooden columns, will have a double-pitched metal roof with integrated solar panels and large

Restoration of carousel animals for Canalside heads to the backstretch

Volunteers are putting the finishing touches on the restored animals for the carousel at Canalside.

Groundbreaking for the solar-powered Buffalo Heritage Carousel will occur at 10 a.m. Wednesday. The $4 million octagonal-shaped roundhouse that will shelter the park-style carousel was approved Tuesday by Erie Canal Harbor Development Corp. A summer 2020 opening is planned for the nearly 6,000-square-foot structure on the boardwalk behind Clinton’s Dish, near Perry and Prime streets. The waterfront agency’s board

Restoration of a vintage carousel is proceeding toward its expected opening at Canalside in 2020, with five horses and an ostrich the latest of a 34-animal menagerie to be worked on. “I’m blown away,” said Assemblyman Sean Ryan, who on Monday visited a workshop near the Herschell Carrousel Factory Museum in North Tonawanda. Ryan said he remembers how the

The restoration of the half-dozen wooden carousel animals should be complete after five coats of museum-quality varnish are applied by volunteers over the next two weeks and jewels and horse tails are added.

The carousel figures coming to Canalside in 2019 were a drab-looking bunch when they emerged from 61 years of storage. Now, they’re being sanded, repaired and painted and returned to their former

The Buffalo Heritage Carousel will give an update on its progress to bring a solar-powered carousel to Canalside at 10:30 a.m. Sept. 30 in Burchfield Penney Art Center, 1300 Elmwood Ave. Featured panelists will be Kevin Connors, principal architect at Eco_Logic Studios; Martha Bohm, University at Buffalo assistant professor of architecture; and Megan Hahin, education director of Herschell Carrousel

Carousel destined for Canalside heads home to NT for restoration

A dozen volunteers are hard at work restoring the animals in the 1924 park-style carousel coming to Canalside in 2018. Until recently, it had been stowed away in storage since

In what has to be considered a “stars aligning” scenario, Canalside will soon be home to a magnificent carousel hand-carved in North Tonawanda nearly a century ago. Foremost was the enormous sacrifice by a working-class Massachusetts family in not giving up on their late patriarch’s dream. Coupled with a strong local volunteer effort, those wooden horses and other animals

Historic wooden carousel could soon come to the

Rare, locally made carousel could get another whirl at Canalside

It seems to us: A chance to make merry, great outdoors getting greater and cheapskate Trump

As reported by The News’ Mark Sommer, a local group is trying to return a rare wooden carousel carved by European immigrants in a North Tonawanda factory nearly a century ago to the area, and the Margaret L. Wendt Foundation has offered to pay $250,000 to help them buy and operate it. The only condition is that it be 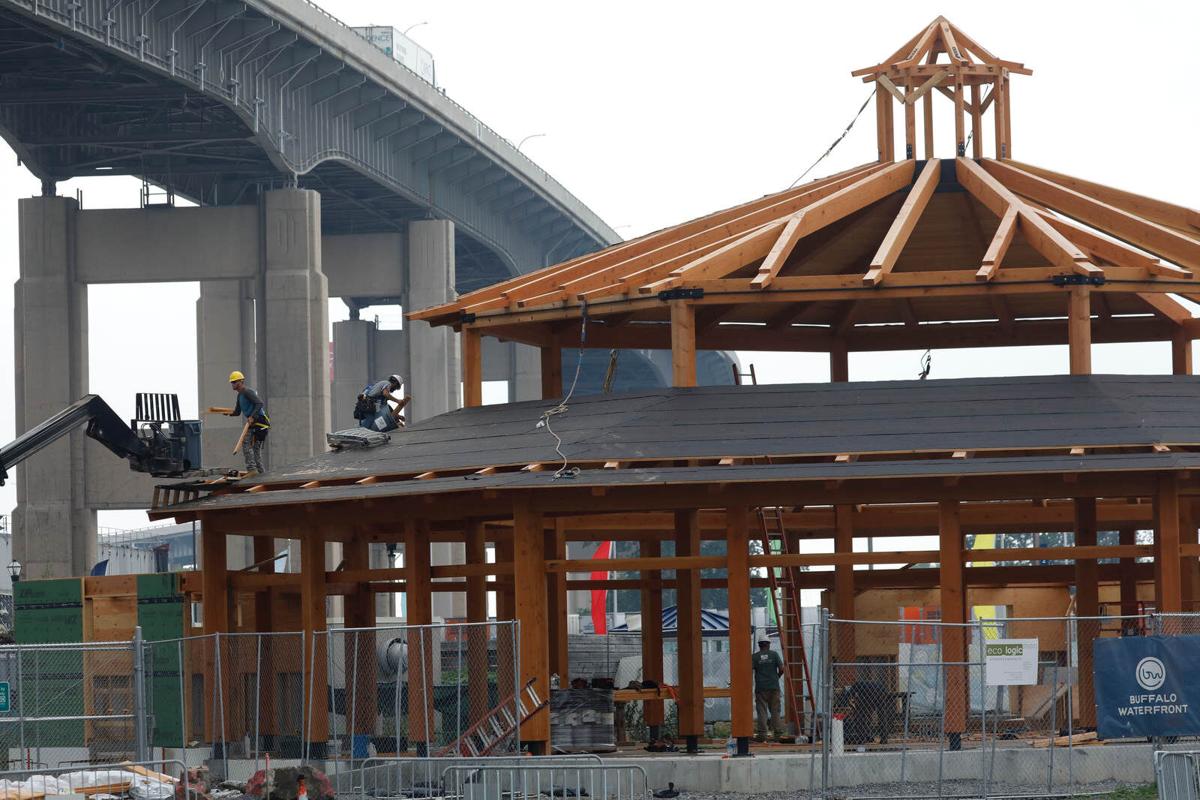 Workers install a solar roof donated by Tesla on the Buffalo Heritage Carousel under construction at Canalside, Thursday, Aug. 27, 2020. 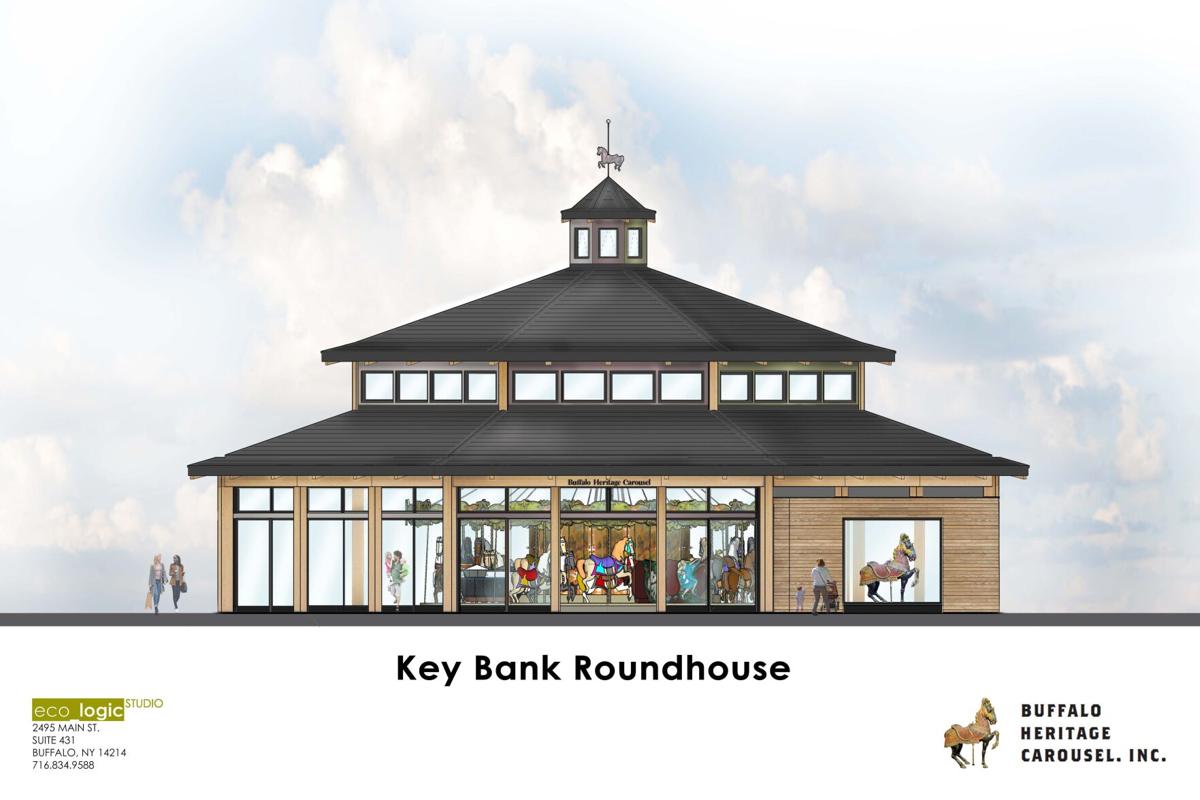 Tesla is donating a solar roof to power the Buffalo Heritage Carousel, which is expected to open at Canalside next year during Memorial Day weekend. 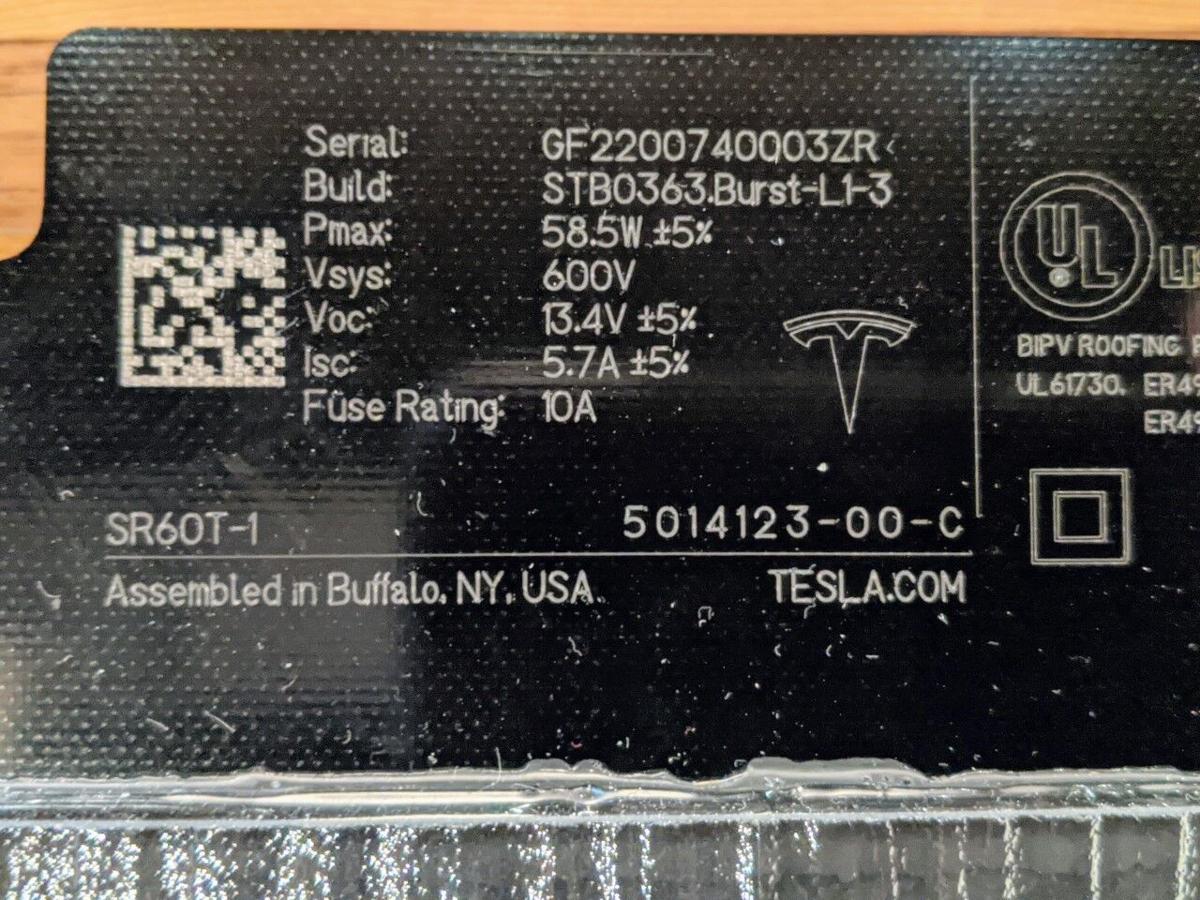 Each solar roof tile being made for the Buffalo Heritage Carousel will say, "Assembled in Buffalo, NY, USA." 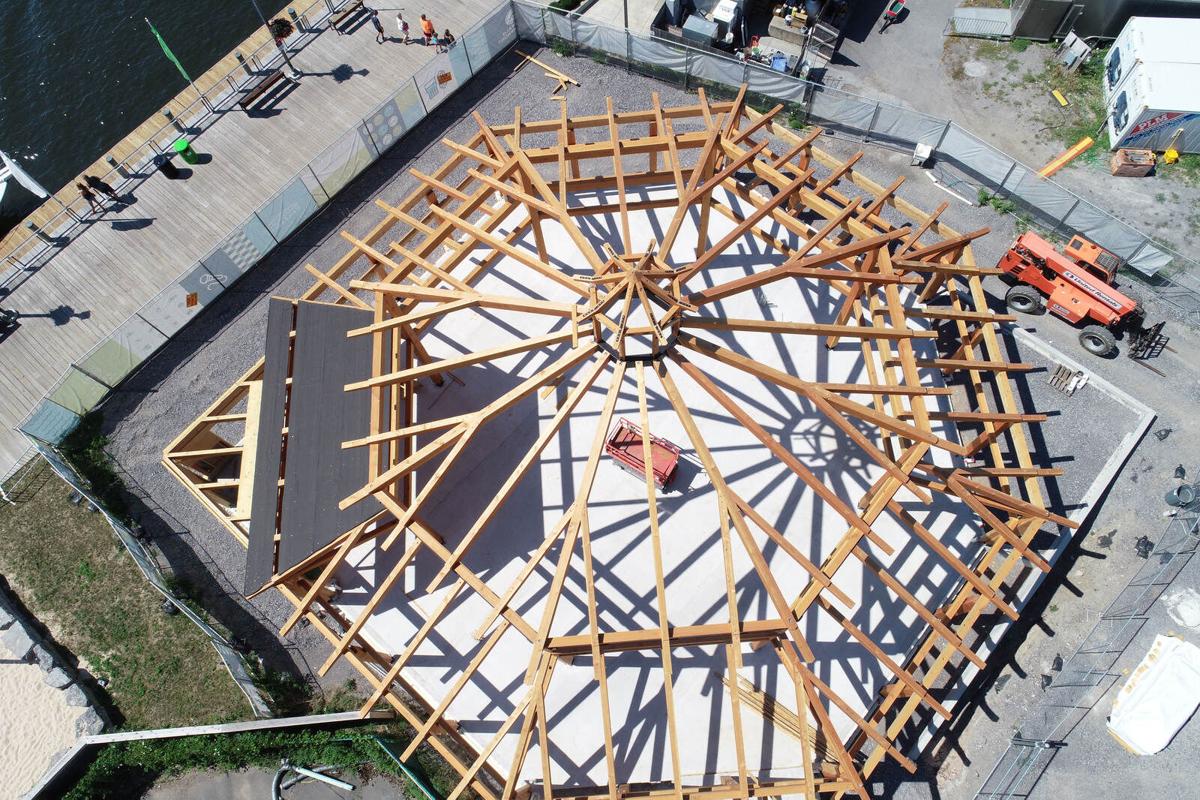 The timber frame of the Buffalo Heritage Carousel frame under construction at Canalside casts harsh shadows in the midday sun, Sunday, Aug. 23, 2020.