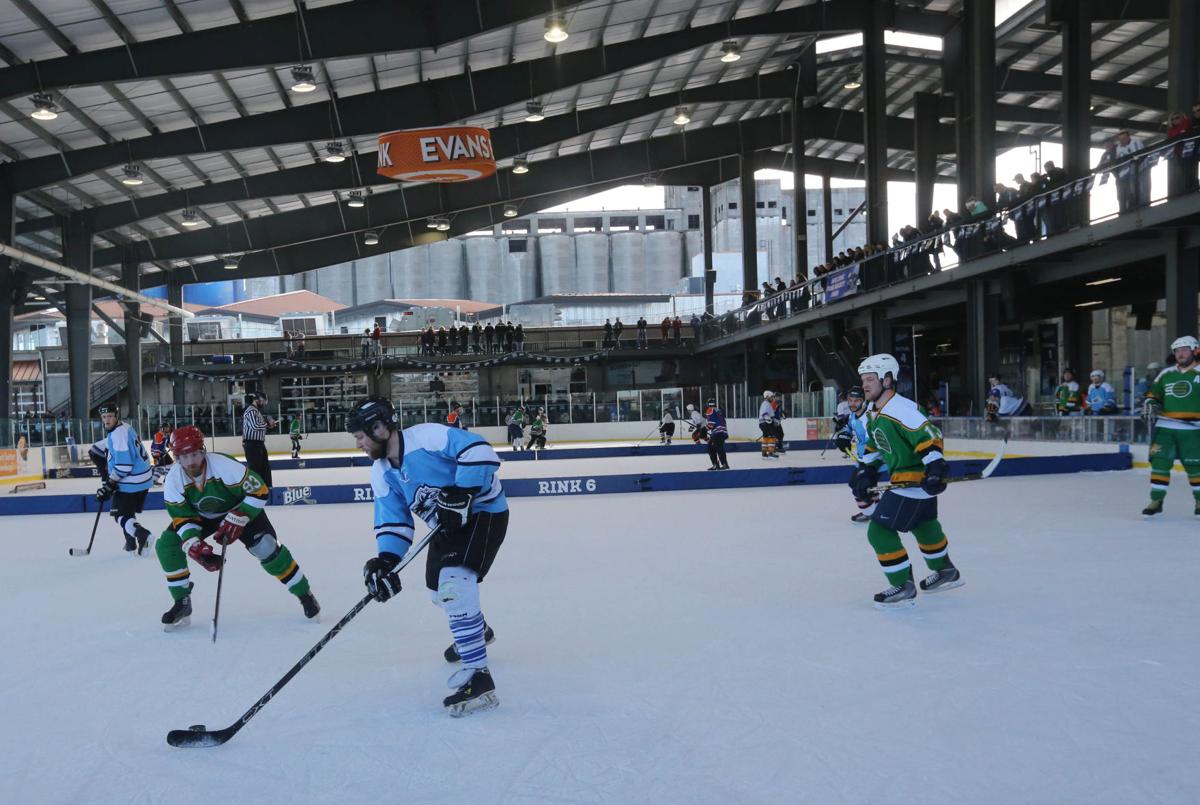 The team Ice Wolves-Rudz competes against the team We Like Turtles in the Labatt Blue Pond Hockey Tournament at Buffalo RiverWorks Saturday, Feb. 18, 2017. (Derek Gee/Buffalo News) 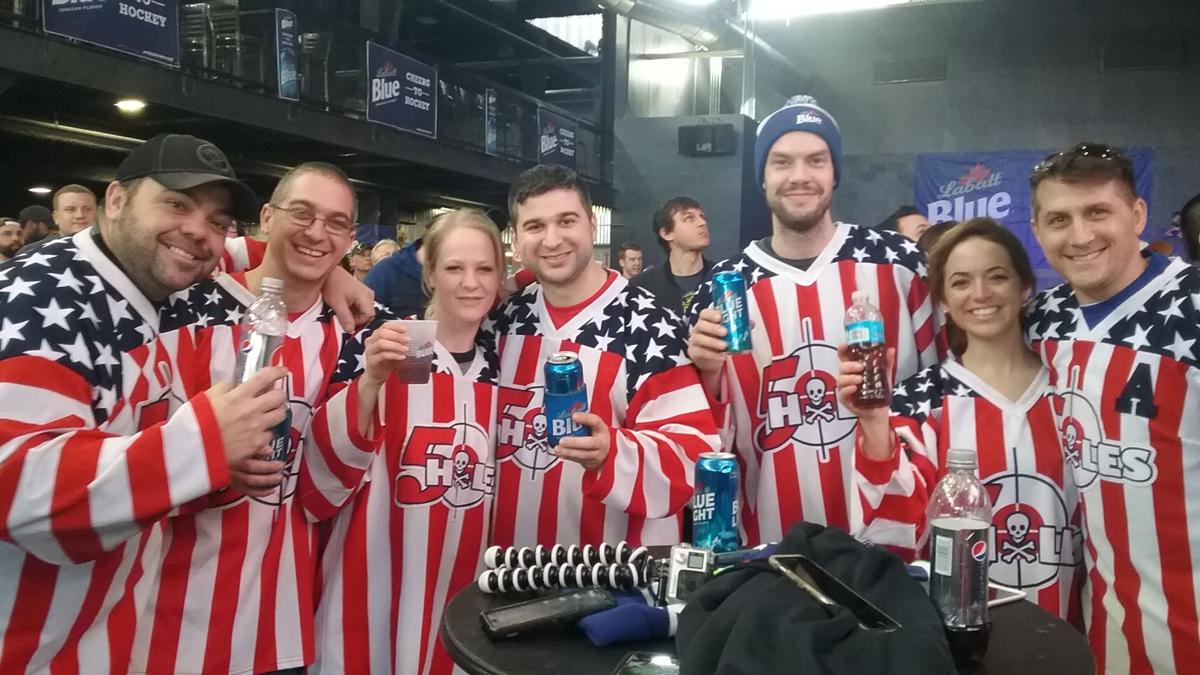 Team 5 Hole sports some of the most colorful jerseys at the 2017 Labatt Blue Pond Hockey Tournament. 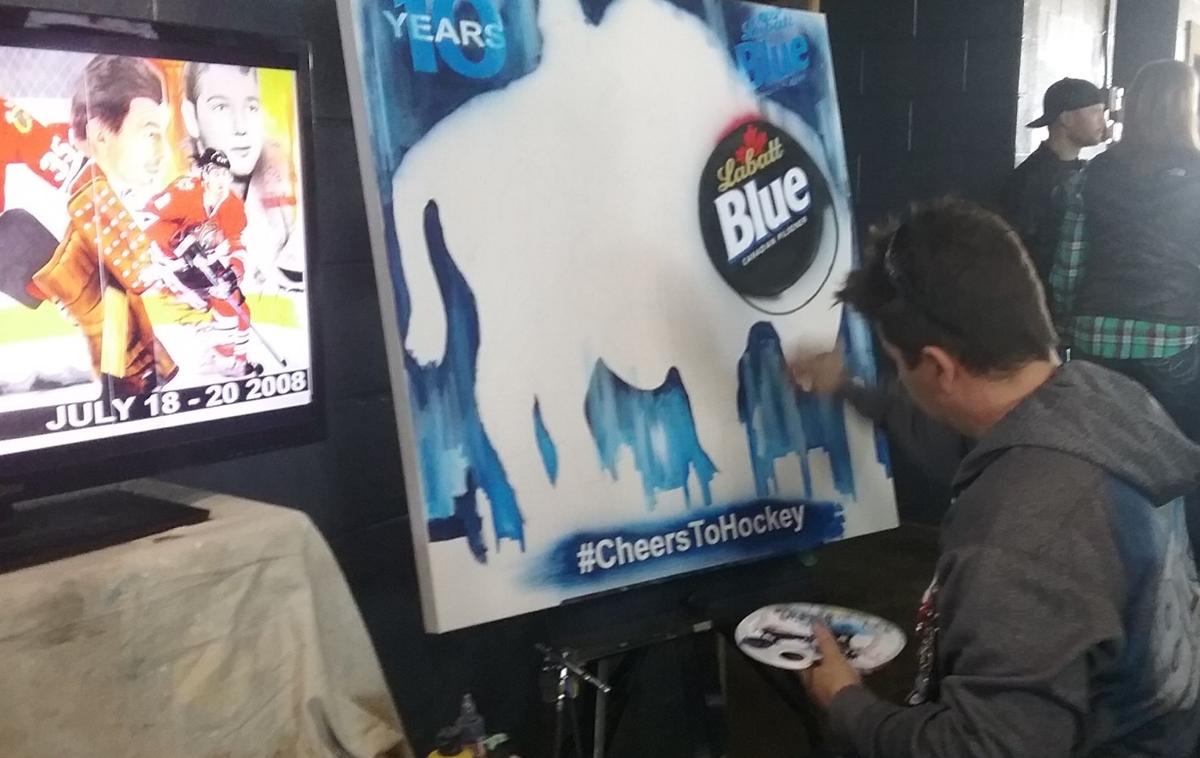 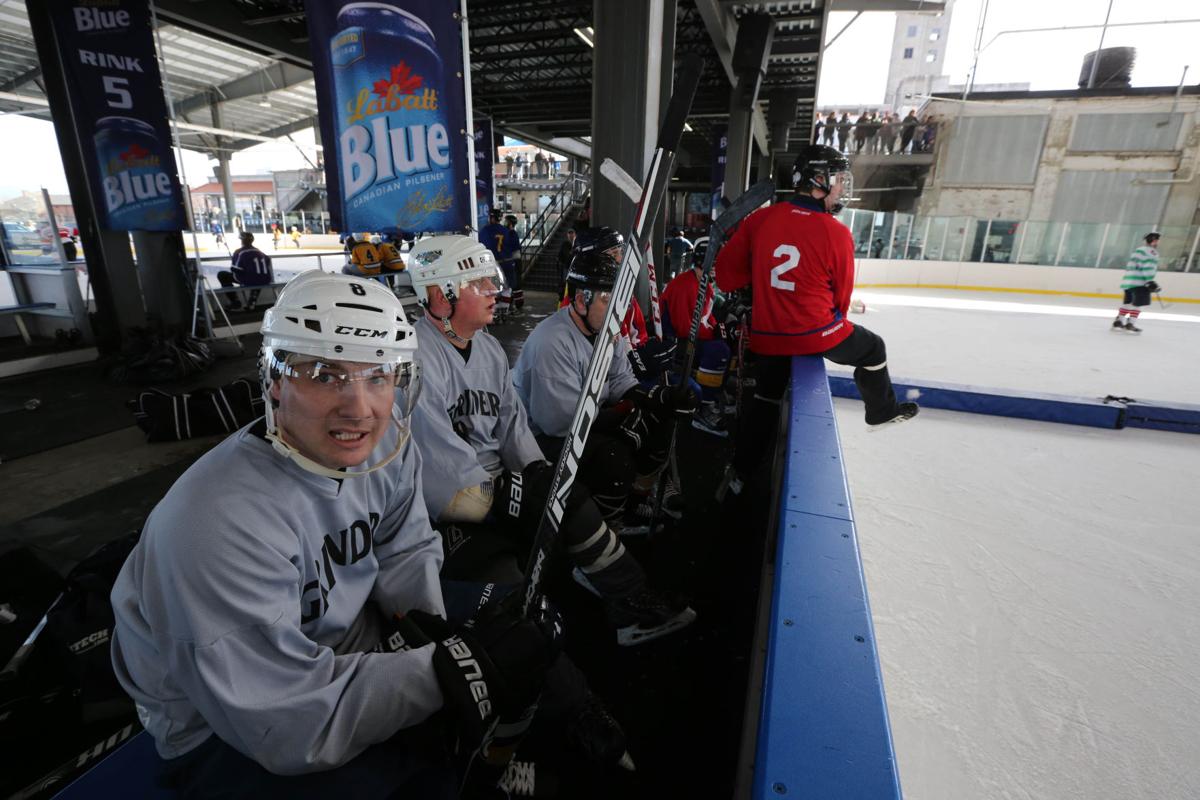 The North Carolina Grinders compete against the Thundercats in the Over 30/21 semifinal at the Labatt Blue Pond Hockey Tournament at Buffalo RiverWorks Saturday, Feb. 18, 2017. (Derek Gee/Buffalo News) 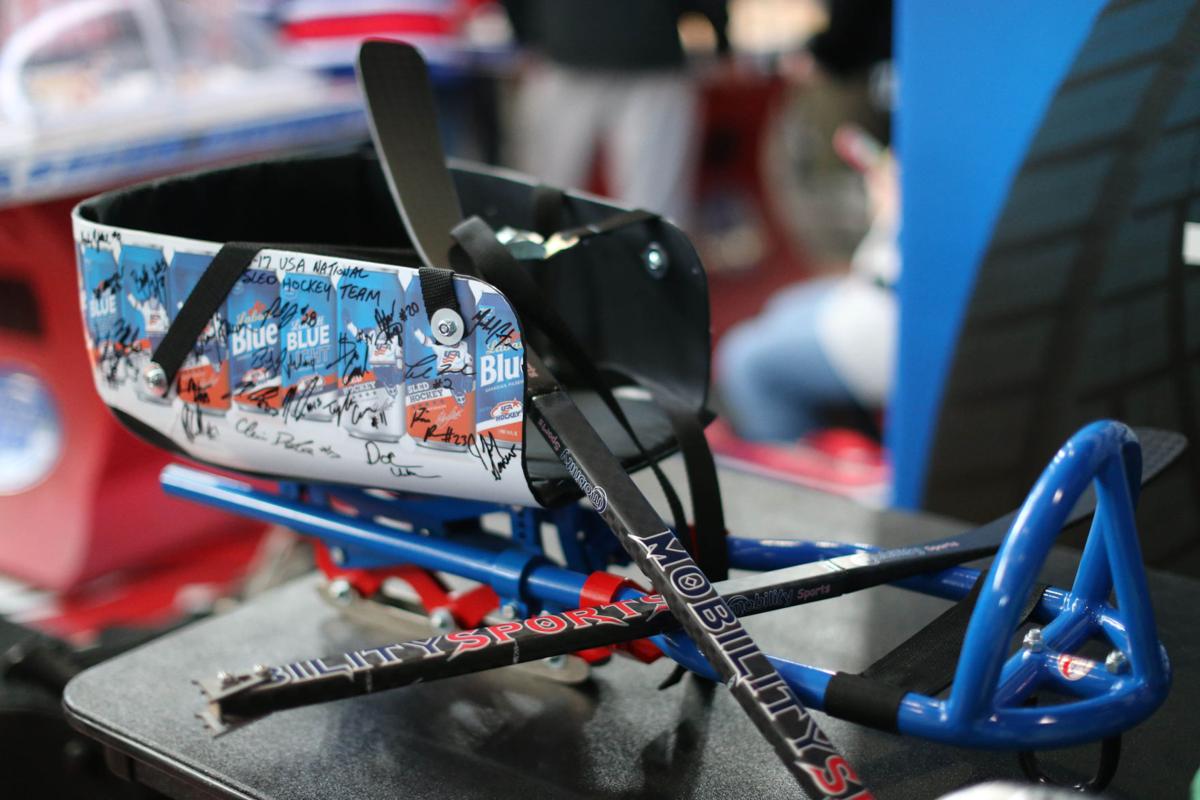 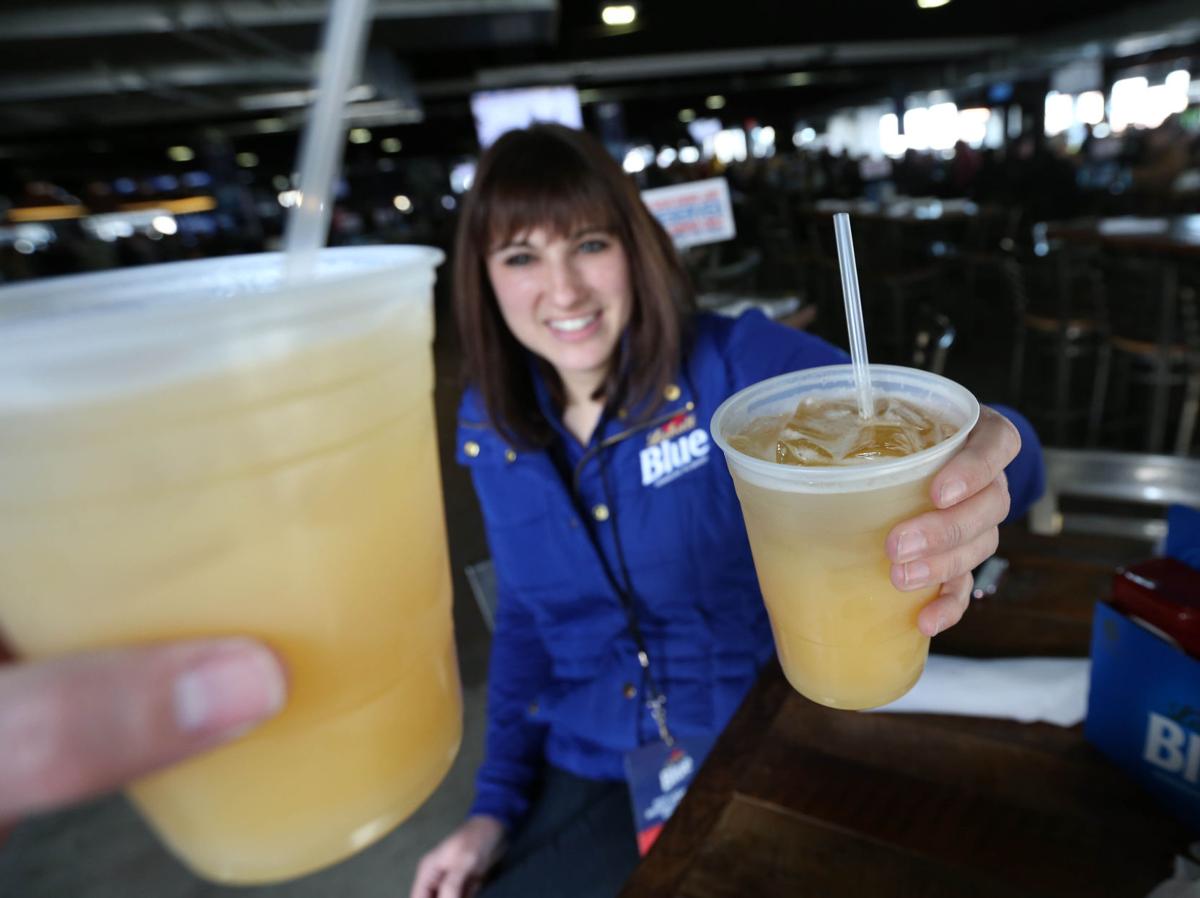 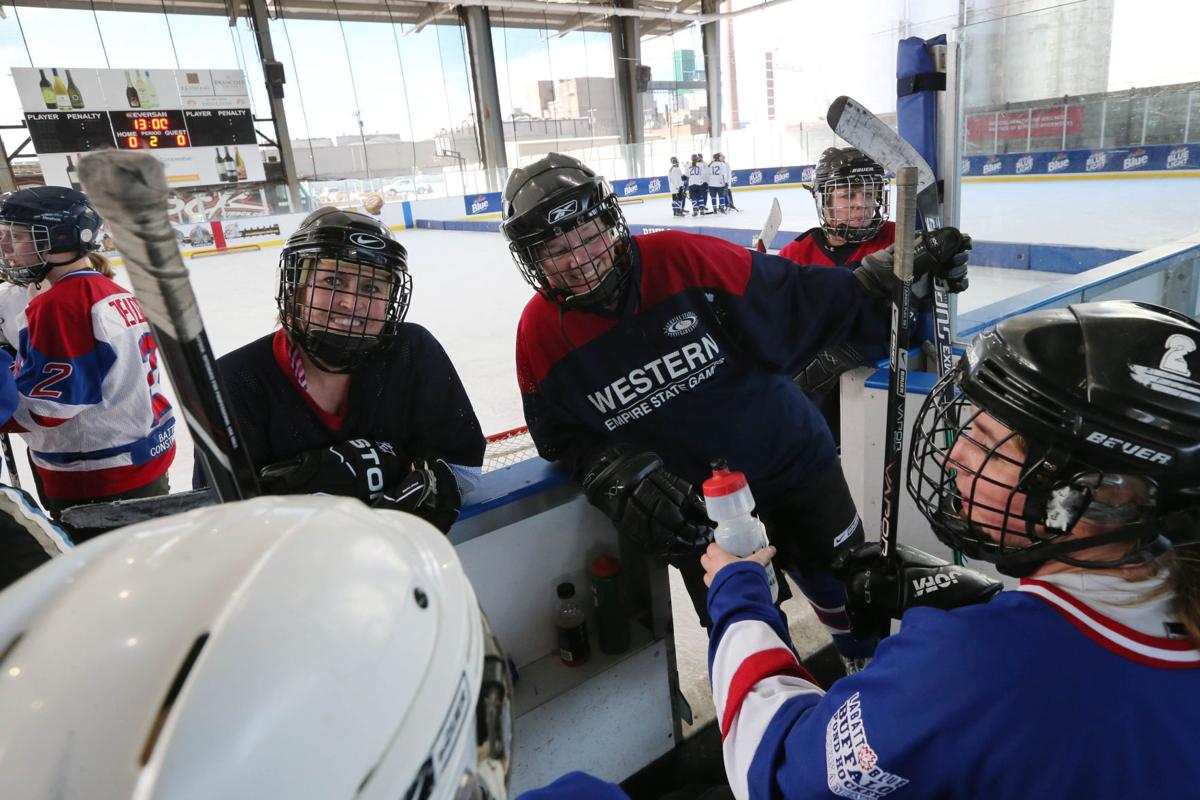 The team Performance huddles on the bench between periods while competing in the women division at the Labatt Blue Pond Hockey Tournament at Buffalo RiverWorks Saturday, Feb. 18, 2017. (Derek Gee/Buffalo News) 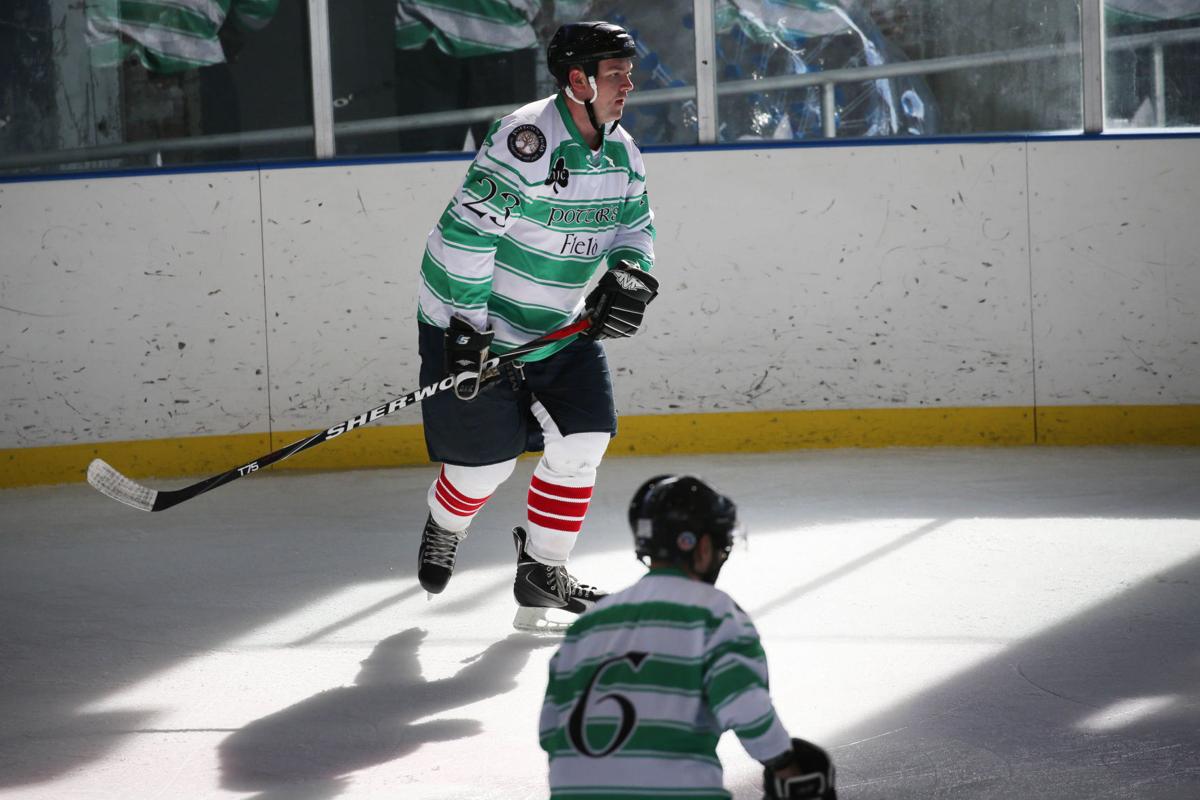 The Labatt Blue Pond Hockey Tournament marks its 10th anniversary this year, having gone from being a slushy, one-day affair to a signature winter weekend that draws more than 1,000 players and many spectators. The event isn't held on a pond or lake any longer, but rather the sprawling Buffalo RiverWorks complex, where ice conditions stay close to perfect no matter what the weather.

In honor of the tournament's 10-year milestone, here are 10 cool things worth knowing about this year's tournament:

Back in 2007, organizers envisioned a true, outdoor event held on Hoyt Lake in Delaware Park. But it quickly got moved to Erie Basin Marina when it became apparent that hockey players might be swimming, not skating, if they didn't move it. Only 16 teams competed the first year, but that number rapidly grew.

But Lake Erie wasn't always ideal either. It was a "slush fest" on warmer days. And in 2012, the weather was so uncooperative that organizers were forced to dump the ice altogether and downgrade the event into a street hockey tournament.

Fortunately, the event moved to RiverWorks four years ago, providing the perfect combination of cold, covered ice and outdoor atmosphere. Instead of 16 teams over one day, the tournament now spans three days and fields 144 teams.

Some teams participating in this year's tournament have been coming every year since the tournament first opened in 2008.

A.J. Burvid and his South Buffalo team, Potter's Field, have played most years, and in all conditions, including the year the team was left playing street hockey in sneakers. Players are mostly childhood buddies from the neighborhood who grew up playing youth ice hockey and street hockey all the way through high school, he said.

Potter's Field - named after a South Buffalo bar - has made it to the finals five years in a row, winning the tournament once in 2015. The team missed out in 2016, however, prompting Burvid to say, "This year, we're on the revenge tour."

We're not referring to the domed game with the rods, handles and little, swiveling players. We're talking about a giant, round inflatable that fits over your body and forces you to push a light, oversized puck around the ice with your feet.

Saturday evening marked the first ever ice bubble hockey tournament, featuring six teams playing 3-on-3. It might look ridiculous, even hilarious, but at least participants have plenty of cushioning against falls, spills and on-ice checking.

Among them was Amherst native Linda Groff, assistant general manager for the Buffalo Beauts, the local, professional women's hockey team. Though the rest of the Beauts are playing in Boston this weekend, Groff said she didn't want to miss the chance to play with her girlfriends here this weekend on the Performance tournament team.

"It's probably some of the toughest hockey I've ever played," she said. "As soon as I touched the puck, someone's usually on me."

As of midafternoon Saturday, however, Groff's team had managed two wins in three games.

The tournament isn't all about hockey. A lot of it is devoted to partying among players and spectators.

In that spirit, the "beermosa" will be the featured drink from 10 a.m. to 2 p.m. Sunday. This novel concoction features a half glass of Labatt Blue, a quarter of orange juice and a quarter of champagne. Organizers are betting the light, and slightly sweet favor will be a runaway hit at the bar, selling for $5 each.

The Sled Hockey Foundation hosted a special exhibition game Saturday to show off the physical and intense, sit-down version of ice hockey, where players maneuver across the ice in specially designed sleds and short sticks.

One of the players in the exhibition game, Adam Page, 24, is a Paralympics gold medalist with Team USA, who competed in the Paralympics in 2010 and 2014.

This year, the Sled Hockey Foundation designed a special hockey sled for Labatt Blue as a gift, signed by members of the national team, for Labatt's support of the foundation, which gives more athletes access to the sport.

People and player watching at the Pond Hockey Tournament offers some fun opportunities. Perhaps one of the most visible teams on or off the ice is the 5 Hole Team, whose co-ed members are decked out in Star-Spangled Banner fashion, with stars across the shoulders and red and white stripes draping down the rest of the jersey, except for the middle where the team name includes a skull and crossbones.

Dave Wachala, 35, of Cheektowaga, said the jersey was designed to be as eye-catching as possible so that team members didn't have to worry about donning separate home and away jerseys.

"Plus, you can never go wrong with the Stars and Stripes," said Lockport teammate Michael Rippo, 48.

Eight teams traveled from out-of-state to participate in this year's tournament. That includes Gregg Bavisotto, who brought two others with him from Raleigh, N.C., to participate. Last year was the first his team, the Grinders, came to the tournament.

"We made it to the finals," said Bavisotto, who grew up in Amherst.

Hence, a return trip this year to see if the team can do just as well, if not better, this year.

David Arrigo's artwork can be found on special edition Labatt beer cans, as well as the goalie helmets of the Phoenix Coyotes' Mike Smith and Montreal Canadiens' Carey Price. Last, year, Arrigo added artistic designs to a series of hockey sticks for the tournament.

But for the 2017 tournament, the Toronto-based sports artist has been spending the weekend at RiverWorks with his sprayers, brushes and paints, creating six square paintings that commemorate the tournament's 10th anniversary in Buffalo. An outline of a buffalo over the city skyline was still being filled in with players in action and promised to be a collector's item.

"Every year, we want to change it up," Arrigo said.

The paintings are among many giveaways and prizes being offered to spectators and team members through the weekend.

Saturday's weather could not have been more perfect, with sunny skies and temperatures reaching into the low 50s. Though Sunday's weather is expected to be about 10 degrees cooler, it'll still be a pleasant enough for spectators, who are admitted to the tournament free of charge. The tournament runs from 10:30 a.m. to 9 p.m. Sunday.

The complete schedule is found at LabattBluePondHockey.com

The team Ice Wolves-Rudz competes against the team We Like Turtles in the Labatt Blue Pond Hockey Tournament at Buffalo RiverWorks Saturday, Feb. 18, 2017. (Derek Gee/Buffalo News)

Team 5 Hole sports some of the most colorful jerseys at the 2017 Labatt Blue Pond Hockey Tournament.

The North Carolina Grinders compete against the Thundercats in the Over 30/21 semifinal at the Labatt Blue Pond Hockey Tournament at Buffalo RiverWorks Saturday, Feb. 18, 2017. (Derek Gee/Buffalo News)

The team Performance huddles on the bench between periods while competing in the women division at the Labatt Blue Pond Hockey Tournament at Buffalo RiverWorks Saturday, Feb. 18, 2017. (Derek Gee/Buffalo News)