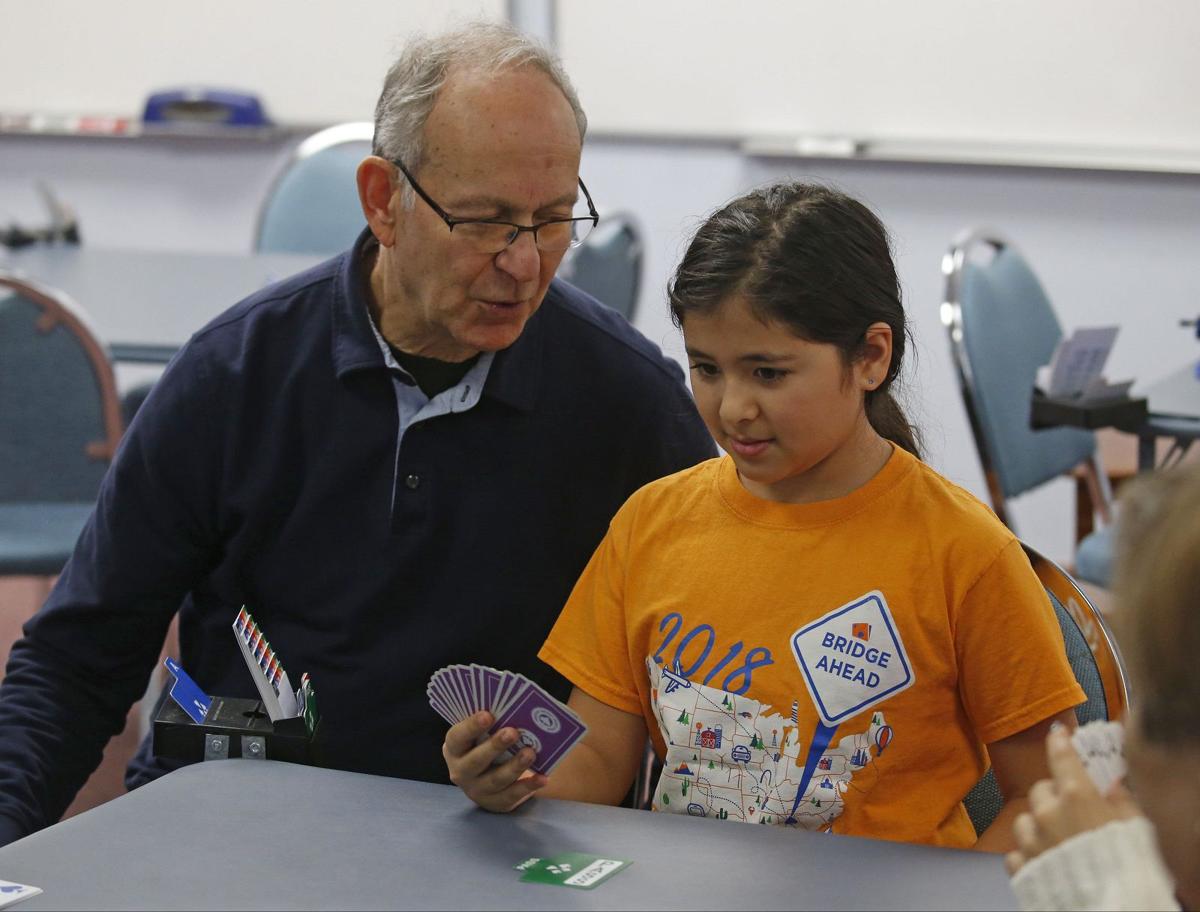 Leondina Passucci, 10, plays in one of her favorite bridge-themed shirts under the instruction of teacher Fred Yellen at the Bridge Center of Buffalo. (Robert Kirkham/Buffalo News) 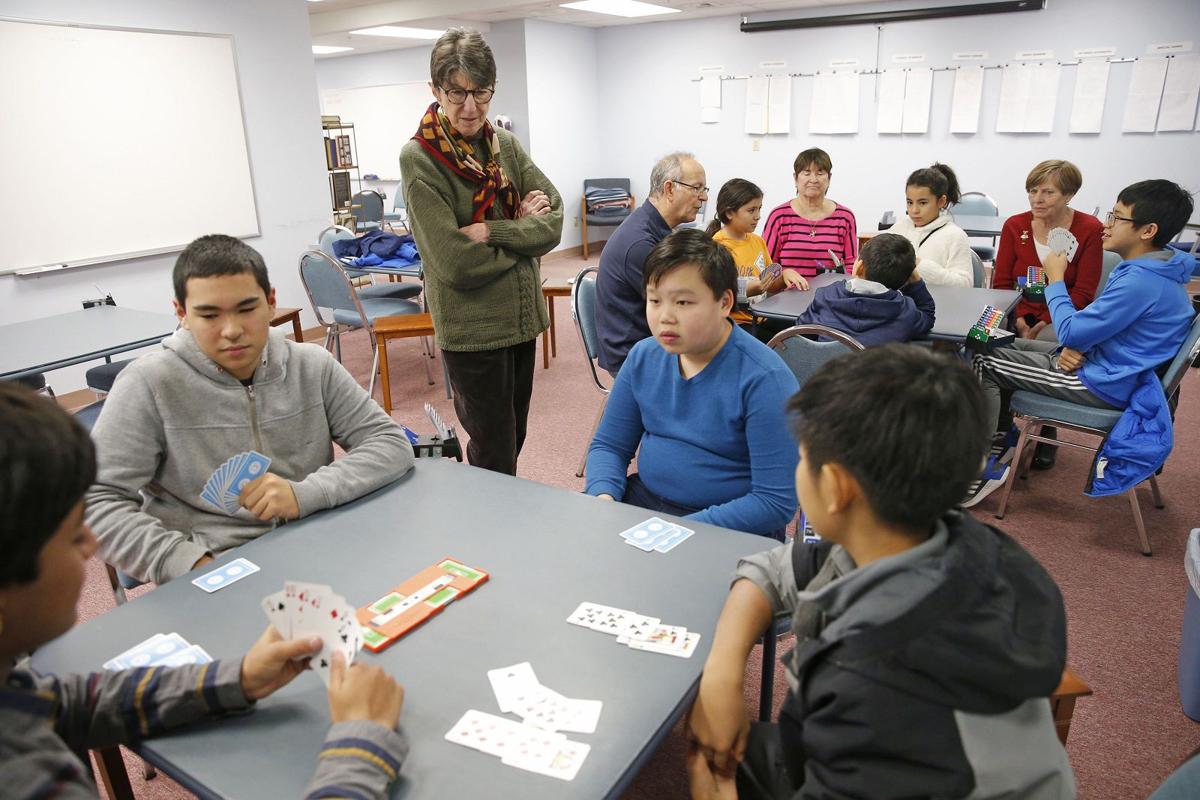 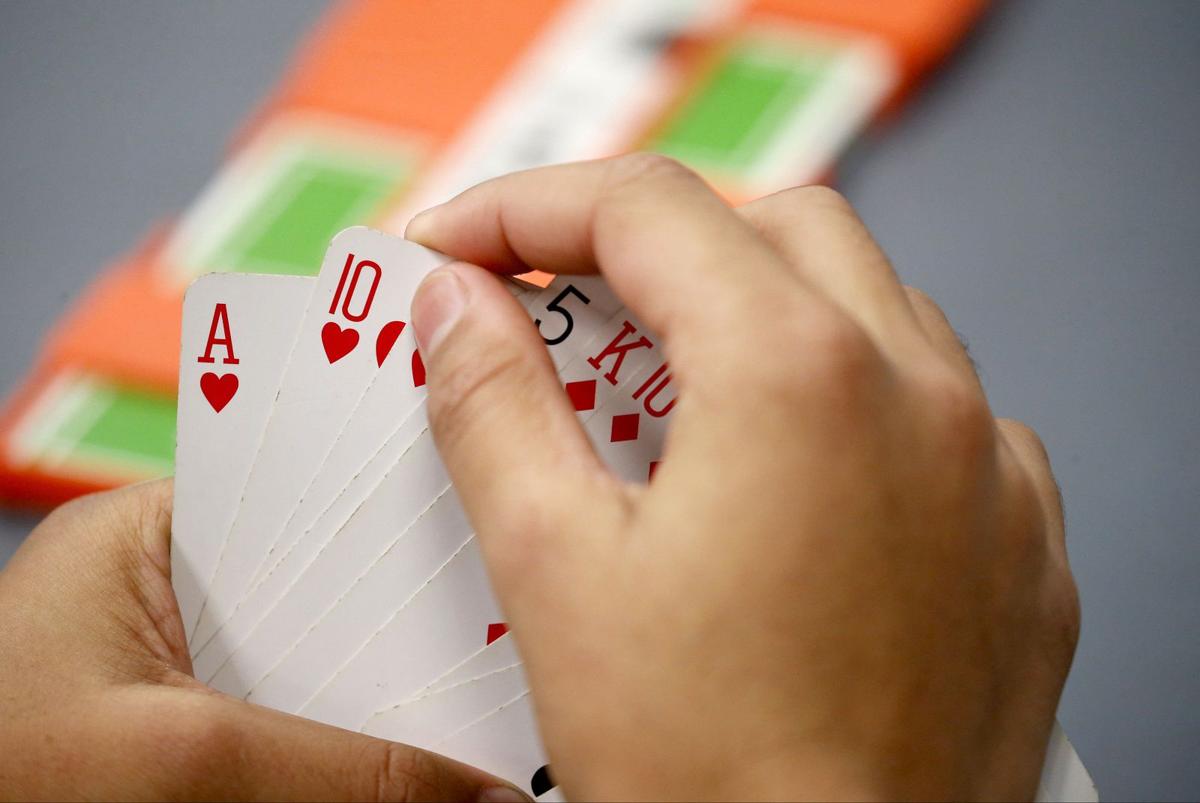 A student in the Gifted Math Program at the University at Buffalo, Ethan helps his mother grocery shop by calculating the unit price of products.

He also is a fan of a game that rewards math knowledge and that is widely played by his contemporaries: bridge.

“When I was a kid, like 9 years old, I was in fifth grade and sometimes I was bored, and my dad started to teach me bridge," he said. "It was hard, but I wasn’t afraid of playing bad with my dad.”

Contract Bridge might be the last game you would expect 21st century children raised during an explosion in technology and video games to play. Yet on Sunday mornings, a group of youngsters, ages 8 to 16, gather at the Bridge Center of Buffalo to learn a game often considered more difficult than chess.

“You’ve got to have a sense of humor to be able to keep them seated for long periods of time and pay attention,” said Fred Yellen, 74, a retired math instructor who spent 33 years teaching middle school students in Buffalo's public schools and now teaches bridge. “I’ve become more effective if I maximize the time they’re playing and limit my talking.”

Ethan and the others who participate in youth bridge, joined the program at the urging of their parents.

“Bridge is my reason to get my kids away from their iPads. That was my original goal getting the kids to play here,” said Jia Passucci, whose son Michael, 14, and daughter Leondina, 10, participate in the program. “Over time we got to know the teachers. These teachers are master bridge players. They share the passion, and they want to pass it on to the next generation.”

The children meet weekly for eight two-hour sessions at the Bridge Center’s office suite on Sheridan Drive. On a recent Sunday, about 10 bridge rookies brushed up on the language of a game that is spoken internationally. With Yellen at the white board, words such as "dummy" and "trump" gained new meaning.

A silent Freda Su sat taking notes. The young student answered no questions posed by Yellen, but she wrote up a storm in a blue folder bearing her name. Yellen crowned Freda the program's best note-taker.

Other students were not so quiet.

“You can’t let the negative kids drive you, and the brilliant kids, if their partner makes a mistake, they are ready to hit him,” said Yellen. “The program has a huge benefit in turning players from antsy little kids to kids with adult-like behavior.”

The program, just 2 years old, sent a team to the Youth North American Bridge Championships in Toronto in 2017 and in Atlanta in 2018. Seven of the students in grades five through 12 placed first in their games during the three-day event in Atlanta. More than 1,200 youngsters from five countries attended the championships, which each year are conducted in a different city, according to information on the American Contract Bridge League website.

The youth program reflects a movement throughout the country to introduce bridge to school students. Elementary schools in New Jersey, Texas and Bermuda sent teams to the Atlanta competition, the ACBL website indicated.

Recruiting new players for the Bridge Center’s Youth Program falls under the domain of Carol Bedell, a retired high school counselor who serves as bridge coordinator. Bedell strikes up conversations with parents of prospective players in unlikely locations – like at the bank while waiting in line. Bedell talks with parents regularly, and posts informational fliers on youth bridge at libraries and coffee shops

Bedell and Sharon Benz are "bridge buddies," seasoned bridge players who sit in on youth games to help the beginners.

"The key to getting kids is getting to their parents,” Bedell said. “Bridge helps your brain. The kids communicate with their partners without talking; that’s where the focus comes in. You have to keep track of what cards have been played already. There’s memory, planning. All this is much better than talking on the iPhone, and playing games on TV."

Ethan, whose father died two years ago, is in the eighth grade at Transit Middle School. Ethan credits his dad with instilling in him a passion for the game of bridge. Playing the game has taught him some valuable lessons, he said.

“I look at problems in a new way. I don’t get frustrated as much. I stay calm if I get a difficult homework assignment,” Ethan said. “Slowly but surely my grades would just improve.”

Ethan’s average improved from 92 to 97 since he started playing bridge, said his mother, Weihong Xie. Like her late husband, Xie is a UB professor. But she does not play bridge. Xie regularly takes her son to the youth program’s two-hour sessions, where he is thriving.

“It’s exciting to see some of the young kids like me when I was a kid trying to learn the game,” said Ethan. “It’s kind of almost like déjà vu. It’s almost like I’ve been there before.”

A new eight-lesson session of the Youth Bridge Program will begin on Jan. 13. It will run from 11:30 a.m. to 1:30 p.m. on Sundays. Those interested in the free lessons are asked to contact Carol Bedell at lorac5@roadrunner.com.

How to watch the last Supermoon of 2021

How to watch the last Supermoon of 2021

Leondina Passucci, 10, plays in one of her favorite bridge-themed shirts under the instruction of teacher Fred Yellen at the Bridge Center of Buffalo. (Robert Kirkham/Buffalo News)