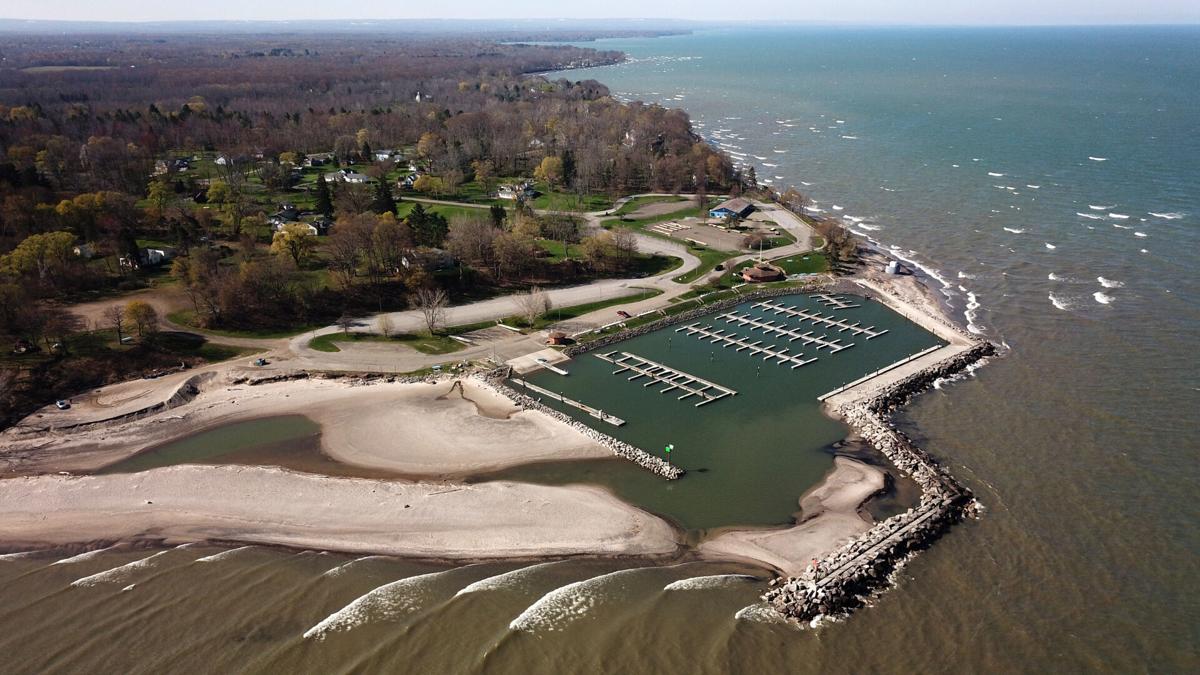 Sturgeon Point Marina on April 23, 2021, where sand poured in over the winter. The marina can't open unless the sand is removed. 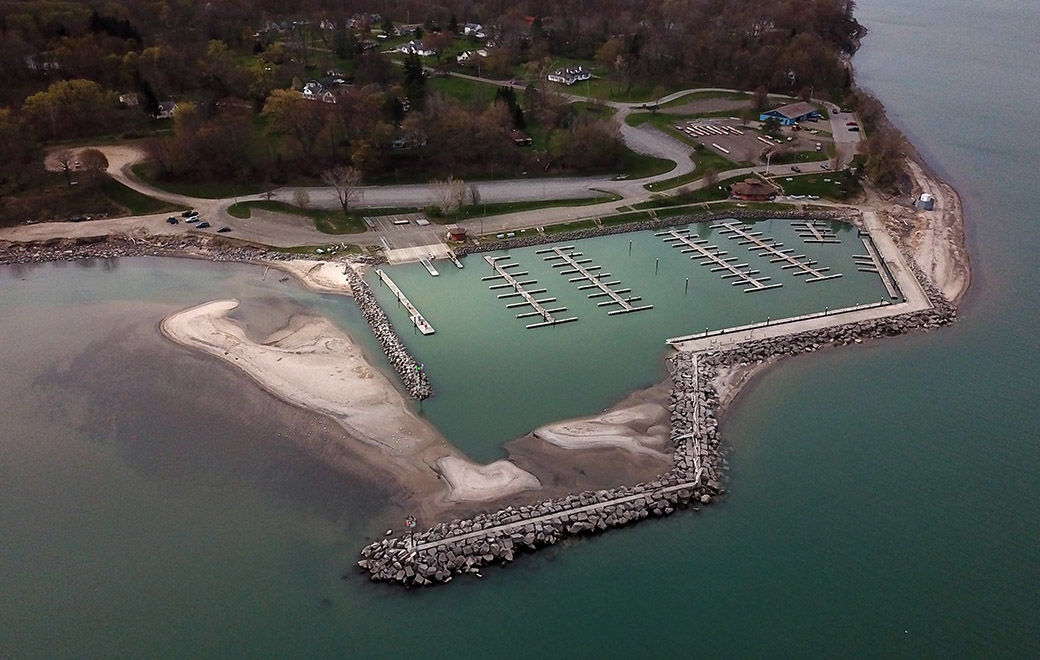 It's one of the stranger lost-and-found announcements you're likely to hear.

"If anybody is missing sand, it’s in Sturgeon Point," Evans Supervisor Mary Hosler said this week.

The Sturgeon Point Marina, a popular spot for recreational boaters and fishermen and a vital safe harbor for boats during storms that roll in on Lake Erie, is once again impassable thanks to winter storms that swept in about 28,000 cubic yards of sand, blocking its mouth. And local officials have so far been unable to come up with a plan, or the money, to do something about it.

Over the winter sand poured through holes in the breakwall, which was badly damaged by storms in October 2019 and February 2020. The pandemic slowed the process of seeking financial assistance for repairs from the Federal Emergency Management Agency last year.

And now the marina is in about the same shape as last year when boaters and anglers demanded it be dredged, except there's more sand. It's possible to walk from the shore to the outer breakwall and not get wet.

Three groups volunteered to dredge the marina last year: Local 17 of the Operating Engineers, Union Concrete Construction and Spoth Enterprises. The union and Dick Spoth said they would help again, but Spoth said he needed some compensation this year.

"I'm willing to do something again this year, definitely not going to be doing it for no cost at all," Dick Spoth told the Town Board earlier this month.

So far, the town has not taken him up on the offer.

And like last year, boaters and fishermen are pleading for the town to open the marina, particularly since it is the only safe harbor of its size between Buffalo and Dunkirk for boaters to take refuge when storms hit.

Also like a year ago, Town Board members don't see eye to eye on the marina.

It won't cost nearly that much, according to Councilman Michael Schraft. He suggested obtaining bids, and if they are more than the $40,000 the town budgeted for dredging this year, the town could turn to the group that came together last year.

Hosler said she does not want to solicit bids if the town has no intention of awarding them. She said the town must solicit bids for any project costing more than $35,000.

Last year's low bid was $90,000, and the board rejected it because of the high cost. That's when the businesses and the union stepped up.

There is another possible option. Sen. Charles E. Schumer has called on the U.S. Army Corps of Engineers to repurpose surplus funding to allow for an emergency dredging of the marina.

"Without these funds and the subsequent dredging operations, Sturgeon Point Marina will not be able to open for the 2021 season, depriving thousands of recreational and commercial boaters of a vital summertime resource and a critical safe harbor," the senator wrote in a letter to the Corps of Engineers.

It's not just a recreational issue. The Evans Police Marine Rescue and Recovery Unit usually docks its 23-foot rescue boat during the summer at the marina. And Rich Davenport, a Tonawanda fisherman who is on the Erie County Fisheries Advisory Board, told the Town Board last week it is a liability issue.

"We need to get that up and running," Davenport said. "We understand there is bureaucracy. We also understand this has been an issue for an awful long time."

Davenport also noted that the town is responsible for the operation and maintenance of the marina through 2035, under separate agreements it struck with the Corps of Engineers and the DEC in the 1980s, when the marina was built with millions of dollars in federal and state funds.

There is an estimated $6.2 million needed in repairs and improvements to the breakwall. The town wants to make the wall at least 2 feet higher, with steel beam reinforcements, to prevent further damage from storms, Hosler said. There also are less-expensive repairs needed at the inner corner.

She said she is hopeful the town will get approval from FEMA soon. She believes construction on the repairs can start this year, and thinks that spending a lot on dredging this year would be throwing good money away.

"It needs to be ready for next year. That’s my goal," Hosler said. "Sometimes you have to take a short-term loss for a long-term gain."

The Editorial Board: Long-term solutions needed to address climate-driven issues at Evans marina

Giving boaters and fishermen a reliable safe harbor requires a plan and the money to implement it, the Editorial Board says.

Sturgeon Point Marina on April 23, 2021, where sand poured in over the winter. The marina can't open unless the sand is removed.