ALBANY – A private consulting firm retained by the state is recommending to the Hochul administration that the Buffalo Bills should build a new stadium rather than renovate its existing Highmark Stadium. 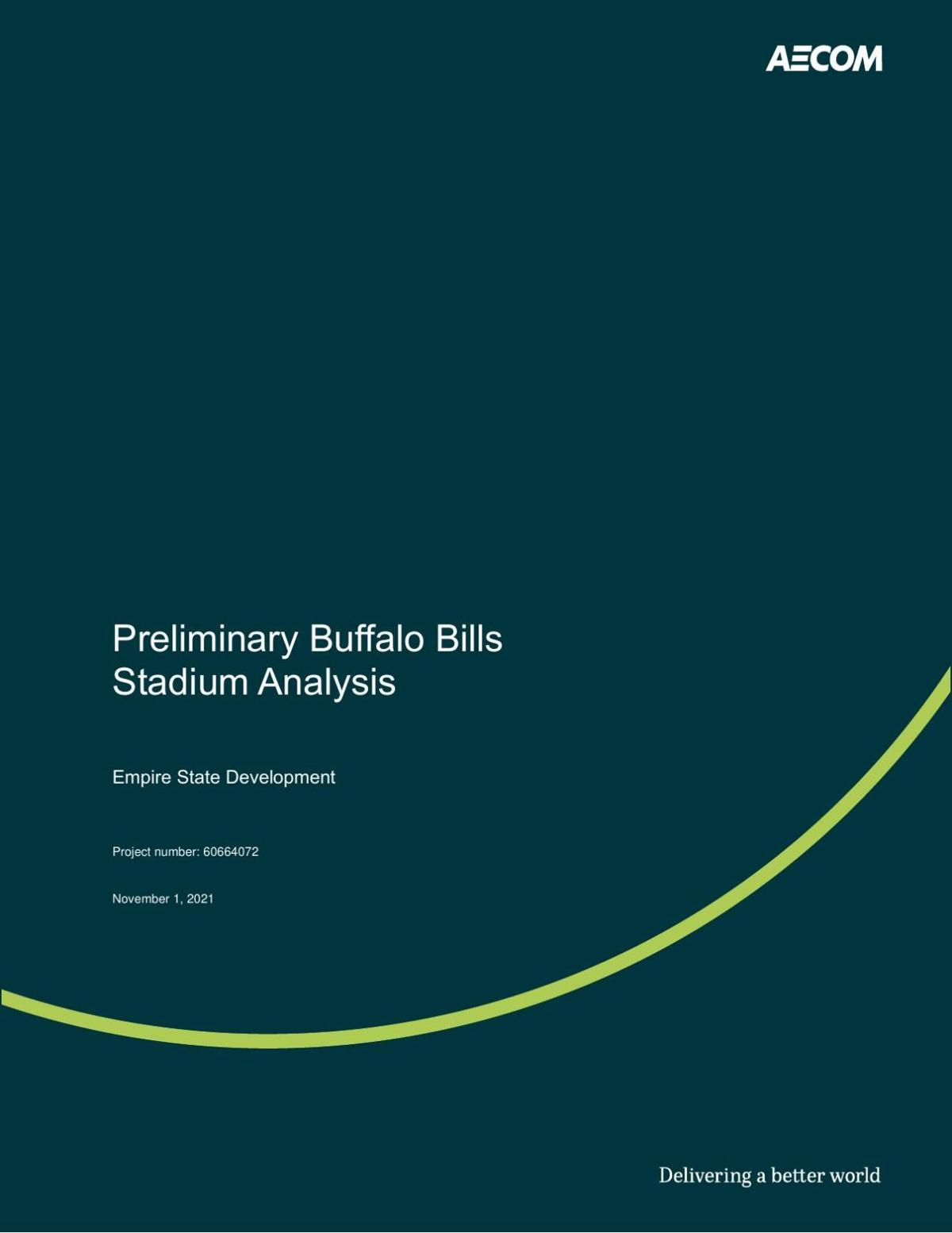 The study does not specifically recommend one way or another whether the new stadium should be in Orchard Park or, as some prefer, be built in downtown Buffalo. AECOM says constructing an NFL stadium downtown would cost at least an additional $350 million compared with an Orchard Park location because of extra expenses related to more complex land purchases and infrastructure improvements.

However, the downtown location’s cost estimate does not include added time to go through legally required environmental reviews, which could add another $100 million, as well as unknown costs to relocate existing residents or businesses in the stadium's downtown footprint, as well as an additional $300 million to add a roof for a downtown location “to address orientation issues.”

All told, the AECOM report said a downtown stadium project could end up costing $2.1 billion or more, a figure in line with what the Bills have predicted.

The report makes a “primary assumption” that a new or renovated stadium would be open-air; have at least 60,000 seats; offer 60 private suites with 16 seats apiece; 60 loge boxes with four to eight seats apiece; and have between 5,000 and 6,000 club seats.

To build an open-air stadium that could be converted to one with a roof in the future would add $109 million to the overall price tag. To build a new, covered stadium right away would add an extra $298 million to the costs, AECOM said.

Putting the stadium in Orchard Park would see the new facility located immediately adjacent to the existing stadium, which opened in 1973 as Rich Stadium. The report described the site as “shovel ready," though it would still need to go through required environmental review processes.

From Rich Stadium to the Ralph and beyond

If downtown were selected, the report focused on a single “South Park” area, which it defined as bordered by Louisiana Street on the west, South Park Avenue to the south, Hamburg Street to the east and I-190 to the north.

The report said both the Orchard Park and downtown sites have “limited potential” to attract “significant upfront real estate investment." It noted, however, that “public investments in infrastructure” surrounding a downtown stadium could boost area real estate values and, therefore, increase property tax collections estimated at an additional $53 million total over the next 30 years.

The consulting firm, hired by the state earlier this year, said a renovated Orchard Park stadium would add 10 to 15 years to the current facility’s lifespan, while a new stadium would have an estimated lifespan of 30 years or more with incremental improvements over time.

The report, released on Election Day, estimates that the Buffalo Bills have a direct $27 million annual impact on income, sales and other taxes. The report said the tax revenue would rise only slightly with a new stadium, but that it could be more with the stadium located “in an urban area with enhanced retail and dining opportunities in close proximity.”

“However, the analysis must also consider the potential loss of these revenues if the team were to leave the market if the parties are unable to secure a stadium agreement. In addition, there are significant intangible benefits associated with serving as the home of an NFL franchise that can impact policy decisions related to investment in a stadium and surrounding neighborhoods," the AECOM report noted.

The report is intended to help guide the state – as well as Erie County and the Bills – during ongoing negotiations over a new stadium and long-term lease; the team’s current lease for the county-owned stadium ends in 2023.

“We are confident the results of this analysis will be a valuable tool as the state, Erie County and the Buffalo Bills work together to make sure the team remains in the region in a facility that Bills fans and all New Yorkers can be proud of for years to come," Kevin Younis, chief operating officer at Empire State Development, the state’s main economic development agency, said in a written statement in releasing the report Tuesday afternoon. The agency issued the contract to AECOM.

A new stadium would provide Bills owners Terry and Kim Pegula with “significant new revenue streams” from premium seating and sponsorship deals. However, their financial gain doesn’t necessarily translate into more economic benefits or tax revenue for the region, the report said. Also, the number of visitors to the region would not increase with a new stadium, especially one smaller than the present facility.

Instead, the report said, the more “relevant question” regarding future public resources – from the state and county taxpayers – revolves around “the potential loss of fiscal impacts if the team were unable to secure a new stadium and decided to relocate to another market,’’ the report said.

The team initially sought to have the public pay for all the costs associated with a new stadium; that idea is gone and the sides have been discussing some kind of public/private partnership, which could take the form of various direct cash grants from taxpayers, tax breaks and financing arrangements.

Building a stadium in downtown Buffalo would likely add 12 months to the construction timetable, not only for environmental reviews and land acquisition work but also what the report said could be “significant” public comment periods given the changes to the historic First Ward area and forced relocation of residents and businesses. That would push the open-date beyond the existing 2023 lease at Highmark Stadium, necessitating the negotiation of a short-term agreement for the Bills to remain there during construction.

It said the downtown site might also be difficult to result in the desired north-south orientation of a new stadium, thereby requiring a more expensive, enclosed stadium.

But locating a stadium downtown would spur more ancillary development than an Orchard Park location, with a “greater potential” to improve the existing neighborhood with new infrastructure improvements and business opportunities.

The report gets into the nitty gritty of potential new stadium designs, with estimated square footage of various requirements – there would be far bigger home team locker rooms than for visiting teams and public restroom space would be about equal to food service space.

AECOM was paid about $150,000 for the report, the Hochul administration recently said.

The report’s details make note of Buffalo’s winters, saying concourse slabs in walkway areas need to be slip resistant and some might be heated. In the high-end suite and premium concourses, the report said, “the modern fan expectation” is that such concourse areas be “fully enclosed and conditioned.” It said those circulation pathways need to be seen “as an extension” of the premium club or suite itself, and that the spaces have high-quality finishes on floors, walls and ceilings and that work includes things like “high quality granite or solid surface countertops in public facing areas.”

The report said the Bills’ locker room should include a family waiting room and kids’ play area, and that players’ lockers are to feature nameplates “that are removable with a tool and large enough for name, number and hometown.” For visiting team players, they will have lockers that are “off the shelf stadium-style lockers.”

Pegula Sports and Entertainment declined to comment on the study, a spokesman said.

A spokesman for Erie County Executive Mark Poloncarz was not immediately available to comment.

The Bills quarterback and the Jaguars defensive end were drafted in back-to-back years at the same spot, the former in 2018 and the latter in …

As stadium talks focus on Orchard Park, some question: 'Why not downtown?'

Orchard Park's identity has been tied to the Bills and the games it hosts in the stadium on Abbott Road for five decades. But the relationship…

Their town, their tax dollars, their thoughts: Readers on where new Bills stadium should go

Replies from readers have been pouring in. Here are some of them.

The Editorial Board: Despite the lure of Buffalo, keep the Bills playing in Orchard Park

A pro sports team may not count as an essential component of a successful city in the way that a hospital or airport does, but in most places,…

The Buffalo chapter of the NAACP and the Bills in Buffalo group are continuing to push for the new Buffalo Bills stadium to be built downtown,…

In Buffalo Bills' stadium talks, one branch of state government is left out

“A generational decision like this shouldn’t be made in the dark," said Assemblyman Pat Burke, a Buffalo Democrat whose district includes the …

A resolution sponsored by the minority caucus would require a 90-day period to discuss the proposal and three public hearings.

The Bills have made it clear they want to build a new stadium in Orchard Park. But government negotiators are keeping their options open.

Scientists can tell what you eat by analyzing your hair