The federal stimulus aid being spread to communities to improve the nation's infrastructure isn't just for roads, bridges and sewers.

The money is also key to jump-starting Erie County's plan to extend high-speed, broadband internet service to all corners of the county.

Erie County Executive Mark Poloncarz first announced a $20 million ErieNET initiative in the spring of 2019, with hopes that the full, open-access network could be built by the end of 2021. But Covid-19 delayed business and design planning.

Now the county has finally released a draft business plan for a new, $29 million network that would lay hundreds of miles of fiber optic lines from as far north as Newstead and Grand Island to as far south as Collins and Concord.

"We are ahead of the curve on this, to a large extent, compared with most counties," said Deputy Budget Director Benjamin Swanekamp, who helps coordinate the ErieNET effort.

While wealthier suburban communities in the region have high-grade networks with fast download speeds, much of Buffalo and rural towns to the south and east do not. This digital divide became even more stark when schools switched to remote learning in 2020 due to Covid and found many students didn't have reliable internet access to participate in classes.

According to the draft business plan, developed by ECC Technologies in Rochester, ErieNET would offer:

• A "backbone" route that would lay about 400 miles of cable, connecting almost every town in Erie County.

• Marketing to private businesses and smaller internet providers, who would lease the network and bring in revenue.

• $7.7 million in federal stimulus funds to keep ErieNET financially afloat for the first five years, on top of the $29 million to build it.

Given supply chain issues and red tape in getting ErieNET off the ground – since many miles of fiber must be strung from existing utility poles – the network is not slated for completion until 2025, though the network should be "substantially complete" and ready for use by 2024, said Matt Crider, ECC Technologies partner and vice president.

The goal is a new network that could level the economic development playing field by offering super-fast speeds to poorer cities and rural towns that currently suffer from a distinct connectivity disadvantage.

Since the concept for ErieNET was first rolled out, many have called it progressive, ambitious – and risky.

The ErieNET plan would make Erie County one of the largest municipalities in the country to operate this type of network, which relies on local internet providers to build out home connections and resell high-speed access to consumers. Local businesses would also be able to contract with the county to provide direct fiber connections for private, corporate use.

“In the new Erie County, we’re not leaving anybody behind,” said Mark Poloncarz, who will formally roll out his ErieNet initiative during Wednesday’s State of the County address at the Albright-Knox Art

A key goal of ErieNET is to attract private internet service providers who would lease the open network and build out "last mile" service connections to homes.

Major, local internet providers like Spectrum, Charter and Verizon have expressed no interest in partnering with Erie County, but smaller providers like Empire, Greenlight and Armstrong have, officials said. Numerous towns have also signed letters of intent to hook into a county network.

The City of Buffalo and University at Buffalo have expressed interest in signing onto ErieNET but have not yet committed to participating. The current map has about a fourth of all ErieNET lines running within the city, Crider said.

The first phase would not reach all of Erie County's towns.

The Town of Wales, for instance, would not receive any open access internet connection as part of the initial network.

ErieNET officials said Wales and other southern Erie County communities would likely be part of a 54-mile expansion of the fiber network in a second phase of the plan as financing becomes available. Wales town officials also have not yet signed a letter of intent to participate in ErieNET, Swanekamp said.

As previously reported, other municipalities in the past have invested heavily in their fiber backbones only to find private providers aren’t interested in going the “last mile.” As many as 30 cities and counties have ended up building their own home connections, which can cost millions, when no providers stepped in to do it.

Erie County's financial risk is mitigated, however, by the influx of American Rescue Plan funds, which should limit the county's out-of-pocket borrowing construction costs to $2.7 million.

The business plan also anticipates ErieNET will operate at a loss for its first five years of operation, as it covers legal, administrative, maintenance and marketing costs.

"We are confident about the model being sustainable,"  Crider said. "That's not to say there isn't risk. There's risk in every business venture."

ECC Technologies has experienced success with other projects.

About 12 years ago, ECC Technologies helped launch the Southern Tier Network that initially sent about 500 miles of fiber through Chemung, Schuyler and Stueben counties, Crider said. That network is not only self-sustaining, but has since expanded to comprise eight counties.

Swanekamp said that while the timeline for completing ErieNET is longer than first anticipated, the demand for high-speed data will only grow, especially as 5G ultra wideband technology comes online.

"As time goes on, people's data needs will continue to go up, up, up, up, up," he said. "We're in an information economy."

The Editorial Board: As ErieNet gathers steam, the county must ensure it reaches unserved homes

The good news is that the $29 million project is moving ahead, thanks in part to federal stimulus dollars that will not only help build the network, but keep it financially afloat for its first five years.

The Editorial Board: Digital Learning Lab helps, but ErieNET remains the answer

If broadband internet access isn’t as urgent as infrastructure such as electrical service, it’s not that far behind. 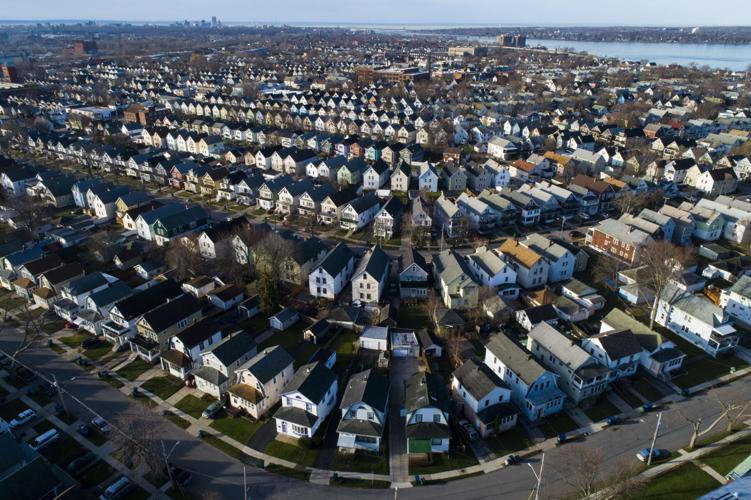 Erie County moves forward slowly with plan to establish ErieNet, bringing broadband network services to all parts of the county. 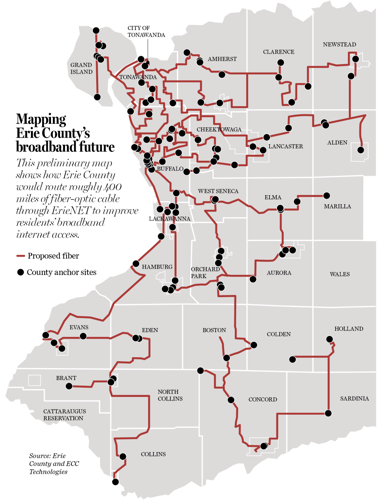