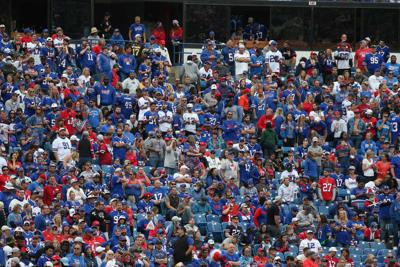 The Buffalo Bills have made it clear they want to build a new stadium across the street from Highmark Stadium in Orchard Park.

But government negotiators are keeping their options open.

A consulting firm hired by the state also studied the cost and practicality of renovating the existing stadium and building a new stadium along South Park Avenue near downtown Buffalo. That's according to stadium consultant contracts released by Empire State Development late Wednesday in response to public records requests by The Buffalo News and other news outlets.

The analysis conducted by AECOM at a cost of more than $150,000 already should be in the hands of state officials, based on a timeline included in the contract that said the firm would complete the initial analysis within 10 weeks. Gov. Kathy Hochul has said her office will release the document to the public as soon as next month.

The AECOM contract offers new details on the scope of the services the consultant provided to top New York officials, who are engaged in negotiations with the Bills over how much public money will go into a new stadium for the team.

Empire State Development also released a copy of the agreement with O'Melveny & Myers, a law firm with extensive experience in stadium negotiations.

One of its partners, Irwin P. Raij, advised the administration of former Gov. Andrew M. Cuomo in talks a decade ago about renovations to the Bills' stadium. Raij and other veteran lawyers at the firm will bill the state at a rate of up to $775 per hour for their expertise.

The contract with AECOM is more detailed than the agreement with the law firm about the services each consultant will provide.

AECOM – like O'Melveny & Myers, based in Los Angeles – is a real estate and infrastructure consulting firm retained by state officials in 2014 to assess future prospects for a new Bills stadium.

In that case, AECOM reviewed four potential sites for a new stadium, including one in Orchard Park, and determined the three locations on the fringes of downtown Buffalo were best because of the potential economic spinoff effects offered there.

The earlier study highlighted a site east of First Niagara Center in the Cobblestone District, another at the northeast corner of Exchange Street and Michigan Avenue and a third located southeast of the South Park Avenue-Louisiana Street intersection along the Buffalo River.

The newest study will focus on three options, according to the proposal dated July 27 and written by Tom Scerbo, an AECOM vice president and metro New York executive. They are: building a new stadium in Orchard Park, renovating the existing Highmark Stadium or building a stadium at the "South Park" site. The proposal also leaves open the possibility of reviewing additional, as-yet-unidentified sites.

AECOM will address the feasibility of stadium renovations or construction at the two sites; review the design and anticipated costs of a new stadium; assess the market demand for any development surrounding the stadium sites; analyze the economic and financial impacts of a new stadium; and make recommendations to the state on how best to proceed based on the study results.

Some of AECOM's work will include reviewing the Bills' stadium proposal to the state and studies previously performed on the team's behalf. The Bills have proposed building a $1.4 billion, open-air stadium near Highmark Stadium with seating for about 60,000 to 62,000 fans, with up to 5,000 more on a party deck, and with a significant investment from the state and Erie County to help pay for it.

The state has seen the reports produced for the team but the public has not had access to those documents.

AECOM said it would produce a preliminary analysis by the end of August and outline its findings and recommendations in a series of memos by the end of September. Hochul in late September revealed the state had retained a stadium consultant and that she would make public the study within two months.

The state agreed to pay AECOM about $155,000 for its work, which will continue into 2022. AECOM's proposal was accepted after ESD issued a request for proposals dated June 8.

Raij, who works in Manhattan, was with another firm when he advised the Cuomo administration.

Empire State Development hired Raij and his new firm without putting the legal work up for bid, arguing his previous experience with stadium negotiations and advising New York made the firm “uniquely qualified” for the contract.

Materials provided to the agency's board of directors last month state the law firm will receive up to $500,000 for legal work over a period of one year, with an option to renew. Lawyers for the firm will bill at a rate between $425 per hour and $775 per hour.

The state signed a "notice to proceed" with Raij's firm in June as it finalized the consulting contract.

Sean Kirst: A young doctor's prescription: Your view on the stadium matters

The people who have supported the team for 60 years deserve a voice, Dr. Ryan Miller says.

With time ticking on Bills stadium talks, what leverage does each side have?

The three sides agree on two major points: A new venue needs to be built to replace 48-year-old Highmark Stadium, and both the Bills and the government need to help pay for it. But the sticking points are complicated.

The Hochul administration has turned to two Los Angeles-based firms to help it with negotiations over plans by the Bills to build a new, $1.4 billion stadium.

State study focuses on three Buffalo sites for Bills stadium, as well as the Ralph

The three best new sites for a Buffalo Bills stadium are all on the fringes of downtown Buffalo, according to a long-awaited report commissioned by

The three best stadium sites in downtown Buffalo have potential to create millions of dollars in additional development, a consultant report says. Consultant cites success of Staples Center in L.A. as model for Buffalo in building a

Several businesses would be among casualties of Exchange Street stadium site

The downtown site, one of the three favored city locations, places a new stadium within an area that would impact several businesses, including the Pierce-Arrow Museum and

Buffalo would follow other NFL cities in tackling parking challenges

Buffalo would follow other NFL cities in tackling parking