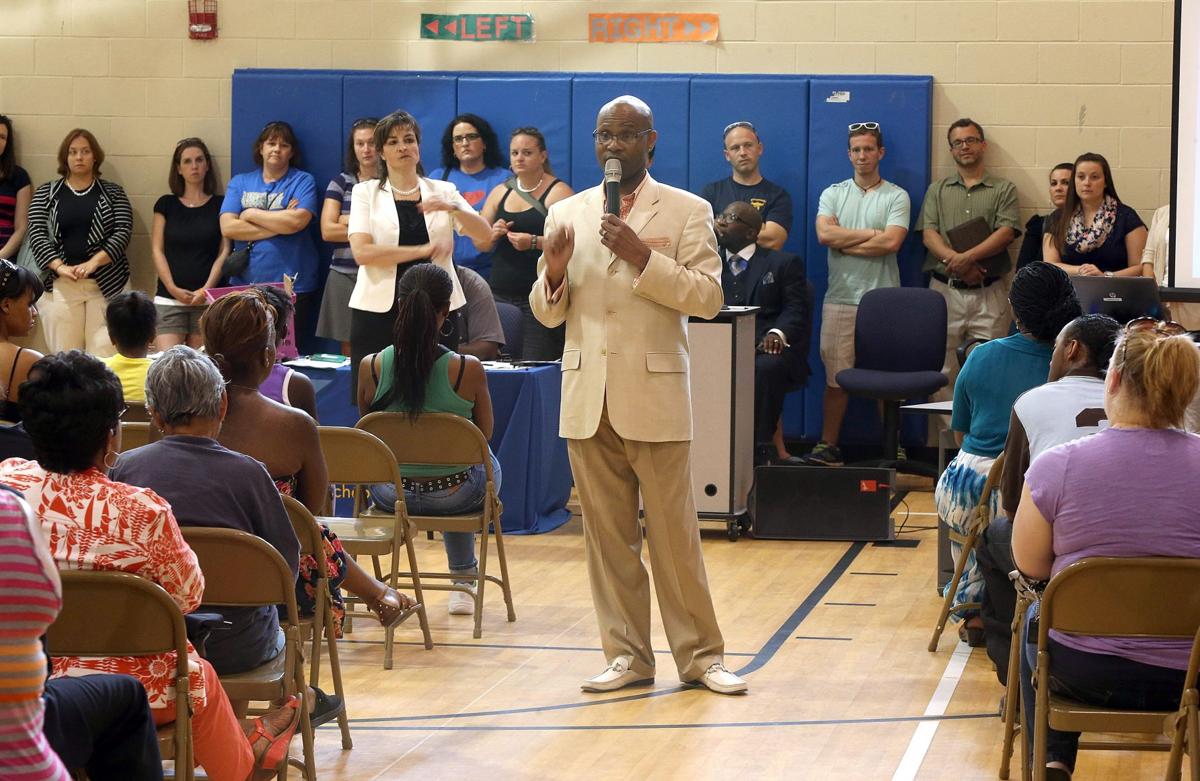 Broderick Carson, Pinnacle Charter School board of trustees chairman, speaks during an emergency meeting held Sunday about the announcement that the state plans to close down the school. 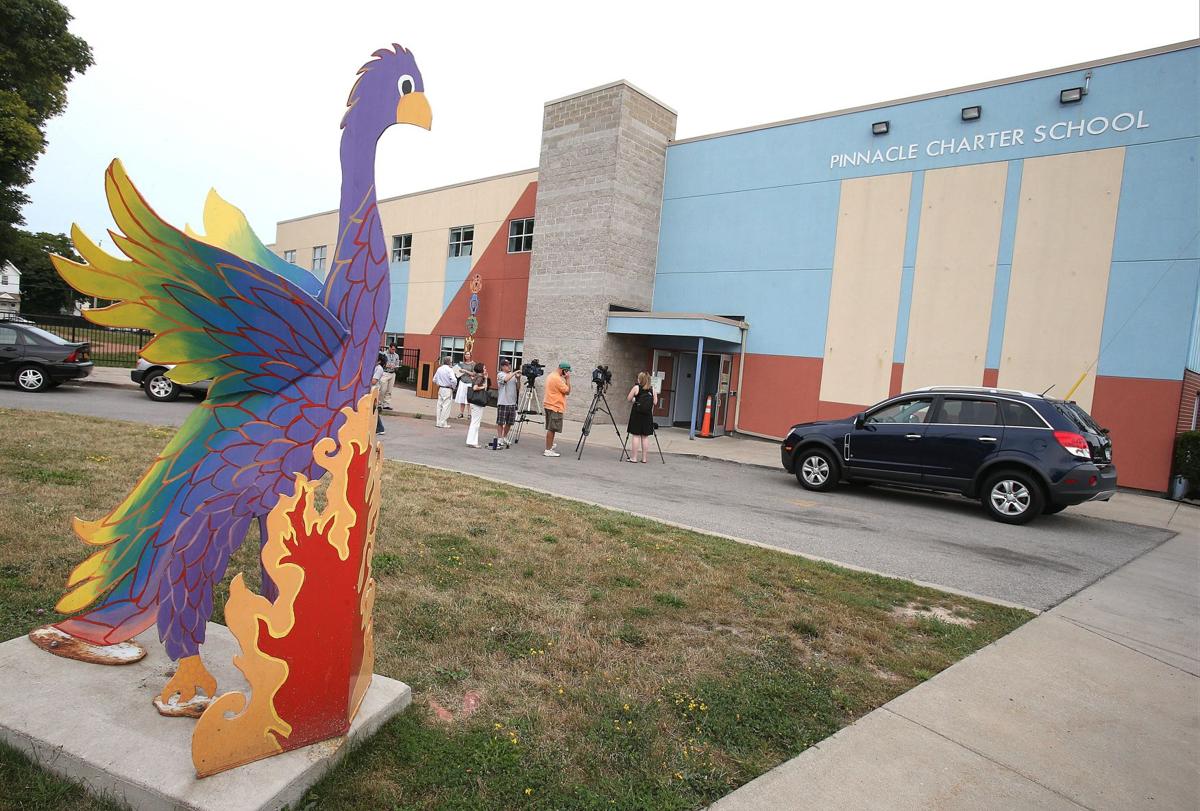 Local media wait Sunday outside a closed meeting about the state’s announcement that it plans to close down Pinnacle Charter School.

Parents of 560 students in kindergarten through eighth grade are in the dark about where their children will attend school this fall after the state Education Department announced plans to close Buffalo’s Pinnacle Charter School less than two weeks before classes were scheduled to start.

The announcement comes 16 months after Pinnacle first fell out of the state’s good graces. In April 2012, the state Board of Regents voted not to renew the school’s charter, citing test scores that at the time placed the school among the worst in the state.

That decision was negated two months later when State Supreme Court Justice John A. Michalek granted Pinnacle a one-year preliminary injunction, arguing in part that the school had not been given sufficient time to improve its standing.

But after two separate court decisions effectively upheld the initial state order, the school is again facing closing – and vowing to fight it.

In a news release, school administrators said they first learned of the state’s decision during a conference call with officials from the state charter school office at 5 p.m. Friday. Classes at the Ash Street school were to begin Wednesday, Sept. 4.

Now, school officials are demanding to know what the state intends to do with its students, a majority of whom come from poorer city neighborhoods and have few alternatives, especially in light of such short notice and the Buffalo School District’s ongoing struggle to cope with state orders of its own.

“At a time when the Buffalo Public Schools don’t have enough placements in Schools of Good Standing, it is reckless for the state to bar us from opening when we’ve met and exceeded our test score goals,” Pinnacle chief academic officer Linda Marszalek said in a statement. “The harm that our children will suffer if this decision stands is unwarranted and unjustified under these circumstances.”

Meanwhile, school and state officials will meet in the school today to discuss the next steps and learn more about the state’s proposed transfer plan. Details have yet to be released.

During an emergency meeting Sunday evening, an estimated 400 parents, students, community members, and staff packed the school gymnasium to learn about the developments. Many parents leaving the building expressed shock and disappointment at the state’s decision, saying they were happy with the progress their children had made at Pinnacle and calling the school a better alternative to public school.

Terrence Boyd, a parent of two Pinnacle students, called the timing of the state’s announcement “crazy.” He called on the state to allow the school to remain open, saying that his kids’ grades had improved markedly since transferring there from public school.

Tiffany Adams, whose daughter was getting ready to start kindergarten at Pinnacle, summed up the prevailing emotion of the night: uncertainty.

“I have no idea what we’re going to do,” she said.

Pinnacle administrators said that, based on state exams administered in April, their school ranked second and third in language and math scores, respectively, when compared to Buffalo public and charter schools that serve “demographically similar population of children” in the same age range, according to the release.

That subset of city schools comprises 19 peer schools in total, excluding Pinnacle, according to information provided by the school.

School administrators also argued that their school has shown a marked improvement in academic performance in recent years, citing the fact that, in 2011-12, Pinnacle was in the top 6 percent of schools statewide in terms of “academic growth” on state assessments.

But those figures are apparently not enough to convince the state. Robert M. Bennett, Western New York’s Regent representative and the board’s chancellor emeritus, pointed out that the same language and math scores cited by school officials were little better than those of the Buffalo Public Schools taken as a whole.

According to figures released by the state in August, Pinnacle students scored worse than their public school peers on the state language exam, although they finished ahead in math.

Both groups performed well below state proficiency levels, although 2013 marked the first year of the state’s new Common Core curriculum, which caused an expected drop in scores statewide.

Bennett expressed disappointment that the state’s decision had caught school officials seemingly off-guard. “I’m shocked they might not have a contingency plan in case they don’t win the case, which apparently they don’t,” he said.

School officials said they would do everything in their power to reverse the state’s decision, starting with motions in the State Supreme Court and Court of Appeals.

“It’s a shame, and we will fight it with every breath we have,” said Lisa Coppola, Pinnacle’s lead attorney.

In the meantime, teachers will report for five days of planned staff development, as though classes will begin as scheduled.

"We are addressing the situation to ensure this does not happen again," a Williamsville Central School District statement reads.

Get sick with Omicron and your symptoms might not feel 'mild.' What you need to know

“Omicron may be less virulent, but do not confuse it with the common cold virus that has almost no potential to cause lethal disease,” said Dr. Thomas Russo, an infectious disease specialist with the University at Buffalo Jacobs School of Medicine and Biomedical Sciences.

Deadbeat debt collector grilled in court: 'Information he wanted to withhold, he withheld'

A hearing was held Tuesday to determine whether Douglas MacKinnon should be sanctioned and even incarcerated for not fully complying with a government subpoena.

What to expect in the next 36 hours: More blowing and drifting

A winter storm warning remains in effect, and though the heaviest snows are behind us, the winds will be picking up.

Questions regarding Burstein's overtime are simple: How much overtime did she get paid? And is there anything wrong with her receiving that money? But getting true answers is tricky because of the political haze hanging over the conversation.

The debate over facts and freedom and rights and restrictions that has roiled the nation since the start of the Covid-19 pandemic has come to a one-square-mile community where complaining about traffic and parking used to rate as the biggest issue.

A new stadium in the wrong location will last for decades, which is bad enough, Rod Watson says. The erosion of public confidence may last even longer.

Broderick Carson, Pinnacle Charter School board of trustees chairman, speaks during an emergency meeting held Sunday about the announcement that the state plans to close down the school.

Local media wait Sunday outside a closed meeting about the state’s announcement that it plans to close down Pinnacle Charter School.