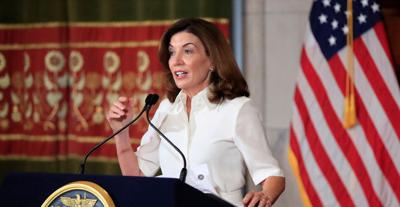 After a decade that included bid-rigging and bribery trials, political entanglements, bully-style politics, internecine wars by Democrats who rule the state government and a general decline in the decorum at the state Capitol, Hochul pledged a new spirit of cooperation among the levels of government, a booster dose of public transparency and even a “culture” change in Albany.

After ceremonial swearing in, Hochul says, 'I want people to believe in their government again'

Gov. Kathy Hochul was ceremonially sworn into office this morning in the Capitol’s Red Room, just 10 hours after she officially became the 57th governor of New York at midnight.

The Buffalo Democrat, who took office at midnight Tuesday following the resignation of Andrew M. Cuomo, had a whirlwind first day that included a ceremonial swearing-in at the Capitol, private meetings with legislative leaders, updates on the remnants of hurricane damage downstate and a get-acquainted speech directed at New Yorkers who don’t really know her.

Thrust into office with a two weeks’ notice after Cuomo signaled his intention to resign, Hochul crammed much into a remote speech that lasted 13 minutes and began with an introduction about her family roots and upbringing.

It was an important moment in her fledgling time as governor, especially given how little Cuomo let her into the spotlight since 2015 and her vow to run for a full term in 2022.

“To those who have yet to meet me, I say this: You may not know me, but I know you," she said of her annual travels as lieutenant governor to all 62 counties in the state.

The brevity of her remarks, which she noted herself, stood in stark contrast to Cuomo’s penchant for marathon orations that sometimes seemed more sermon than speech.

On Covid-19, Hochul said new vaccination orders are likely soon now that the Pfizer vaccine has been given final approval by the U.S. Food and Drug Administration. She said state-run mass vaccination sites might reopen to help pave the way for vaccine booster shots to be given to people eight months after their initial jabs. A new back-to-school Covid-19 testing program will also be put in place statewide.

The school mask mandate – applying to anyone entering a public or private school in New York – will be facilitated with the help of nearly 70 million masks acquired by the state government to be provided to students and teachers statewide.

A mandatory vaccination program is not being required immediately, as is the case in New York City for teachers and staff there, Hochul said, but will be considered based on talks between “education stakeholders” and the Legislature. Unions in New York City are taking legal action to force the vaccine mandate to be subject to collective bargaining talks.

Besides a new push to get rent relief payments to qualified people – she said those who apply and qualify will be able to stay in their homes for at least one more year – Hochul said the state this week will publish data on county-by-county successes and failures in getting the rent payments distributed.

Analysis: Hochul has no time to bask in the history she made. She has work to do.

Hochul must straddle both the upstate and downstate worlds in a way like no other Democrat before her. Can she do it?

Hochul addressed the still-looming shadow in the room cast by Cuomo without mentioning his name. She said she wants to focus Albany forward “without distractions” in a way that will result in a “dramatic change in culture and accountability.”

With Cuomo facing investigations into allegations that he sexually harassed multiple women, Hochul said she is directing “an overhaul” of state sex harassment and ethics policies. For starters, all sexual harassment awareness training will be conducted live, not via computer where people now can “click their way through a class," she said.

Shortly after 10 a.m., New York Chief Judge Janet DeFiore re-ran the swearing in ceremony, this time in a public setting before a packed news media at the Capitol’s Red Room.

“So help me God," Hochul said as she concluded her oath with family members. A beaming William Hochul looked on while the new governor had one hand perched atop a family bible that she had used twice before when taking the oath for the lieutenant governor’s post that she had filled since 2015.

In a brief question-and-answer session with reporters, Hochul noted, without directly saying it, that she takes over from a scandal-plagued administration.

“I want people to believe in their government again. It’s important to me that people have faith," Hochul said when asked for her top priority.

So begins a historic moment in the state with the first woman to serve as the chief executive of the government since the state constitution created the gubernatorial system in place since 1777.

Neither lawmaker made any announcements on deals or prospects coming out of their meeting with Hochul, and they seemed content to let the day be for Hochul to publicly shine. Asked if the new governor represented a “breath of fresh air” following more than a decade of Cuomo’s more authoritarian style, Stewart-Cousins said: “It feels good. It absolutely feels good.”

Hochul said she spoke with President Biden Monday night and he pledged his support for her administration.

"Anything I need," she said.

Hochul chose to take her public oath in the Red Room on the Capitol’s third floor, immediately adjacent to her private office suite. Many governors, such as Franklin Roosevelt, used the room – with its panels of mahogany, red Spanish leather and carved oak beams in its ceiling – as an office, but in recent decades it has become a ceremonial room for press conferences and other gatherings. Designed by H.H. Richardson, the room more recently became a center of gloom for Cuomo; it is the place where he often beamed his defiant, virtual speeches since the scandals began erupting earlier this year.

Besides her husband, invited guests included her son, Will; daughter, Katie; and their spouses, Matt and Christina. Her father, Jack Courtney, whom she said represented the “spirit of my mother,” also attended. She noted his role in a “big Irish Catholic family of six kids.” Some of those siblings attended the ceremony, as did her close friend, former Hamburg Councilwoman Joan Kesner.

“This is an emotional moment for me, but I am prepared for it,” she said.

Hochul is also witnessing the usual Albany reaction for new governors: a honeymoon period. Lawmakers in both parties, as well as stakeholders with various interests before the state government, have for hours been blasting out congratulatory emails, using terms such as "new day" and wishing her well in trying to "restore faith" in a tarnished Executive Branch of New York State's government.

The new governor also carried out a more solemn task: ordering flags in New York to be lowed to half-staff Wednesday to honor Trooper James J. Monda, who died while on a marine detail on the Great Sacandaga Lake last weekend.

For the departed governor, the ending was not as lofty as when he became governor in 2011. His final tweet in office was to push back on reports that he was trying to give up his pet dog as he moved on with life.

On Tuesday, the disgraced governor suffered another setback of something he cherished: the International Academy of Television Arts and Sciences – citing the sexual harassment allegations and his resignation – said it was rescinding the honorary Emmy he was awarded last year for his daily Covid-19 press briefings.

The Editorial Board: Hochul opts for transparency in adopting the CDC’s counting method

The new governor promises transparency so no one will have to question the information flowing from the governor’s office. That, in itself, is a major step in the right direction.

The Editorial Board: New York’s commitment to open government belongs in its constitution

Freedom of information laws are supposed to give citizens the ability to easily access facts and figures about the governments they fund. Thi…

Hochul, the lieutenant governor and a Democrat from Buffalo, ascended to the chief executive role following the departure of Gov. Andrew M. Cuomo at midnight.