The Buffalo Bills' home playoff wins weren't just big for Western New York, they provided a path for venues to reopen across the state.

That could be good news for the Buffalo Sabres and the team's fans – but don't bust out your favorite jersey and start lining up at the foot of Washington Street just yet.

Venues that seat 10,000 or more people will be able to reopen to 10% of their capacity, given that they meet state guidelines, including testing of all attendees.

"The Buffalo Bills demonstration program ... was an unparalleled success," Cuomo said during a video briefing Wednesday afternoon from Albany. "Seven thousand people in a stadium, everyone tested.

"We are going to now extend the Buffalo Bills example. Any large stadium or arena ... can open on Feb. 23."

That would seem to include KeyBank Center, the home of the Sabres. With a capacity of more than 19,000 for hockey games, close to 2,000 fans would be allowed to watch games.

The arena would be able to seat no fans on the bench side of the building in the 100 level because the glass has been taken out from behind the benches due to new NHL Covid protocols.

But in a statement posted Wednesday afternoon on Twitter, the Sabres did not quite throw open the arena doors and yell, "Welcome back!"

"Gov. Cuomo's announcement providing the opportunity to allow Sabres' fans back to KeyBank Center is a great step forward. We continue to work closely with the New York State and Erie County Departments of Health to ensure a safe, healthy, and fan-friendly environment to enjoy Sabres hockey. Ticketing information and game-day protocols will be announced as they become available."

The Sabres would have to determine which season ticket holders could attend and what it will do about allowing fans in luxury suites. The organization has to determine ticket and concession policies, with many arenas and stadiums that have opened to fans going mobile and cashless in those areas to cut down on contact points.

It has to match testing with ticketed fans, a chore that was not too arduous for a single Bills playoff game on a weekend but one that could be difficult for an NHL schedule that could have up to four home games in a week.

The team also could opt to only allow fans into the building for certain games, perhaps those on weekends or against marquee opponents in their division.

Still, Sabres winger Kyle Okposo said Wednesday he welcomes the idea of having fans back in the building.

"It's definitely something that has been missing," he said, adding: "Everybody's just trying to do the best with the information that they have, including Gov. Cuomo. ... I know that my kids will be pretty thrilled and hopefully they can come to a game, too."

The Sabres have not played since their season was put on pause last week following a Covid-19 outbreak.

KeyBank Center appears to be the only sports venue locally that would be immediately affected by the new guidelines. The next largest arena that would normally be hosting sporting events at this time of year is Alumni Arena on the campus of the University at Buffalo, but it has a capacity of about 6,800.

The decision would eventually affect Sahlen Field, the home of the Buffalo Bisons. The team's schedule has not been set, but could begin play as early as April.

The guidelines are for any arenas or stadiums for any kind of event, sports, concerts or other performances.

The overall guidelines include:

• Limited attendance of 10% of capacity

"This hits the balance of a safe reopening," Cuomo said.

Cuomo said Bills Stadium was the only football stadium to open for fans "with testing."

Cuomo said that the NBA's Brooklyn Nets will host a game Feb. 23 against the Sacramento Kings at the Barclays Center.

"Using this model they've been approved to do that," the governor said. "Anyone else who is interested should let us know."

With eye toward future, Sabres not blaming NHL or Devils for Covid pause

"It’s something that’s directly affected the entire universe. It’s tough to say and put the blame on someone," said Sabres center Jack Eichel.

Mike Harrington: Sabres know lots of hockey is coming on their daunting schedule

"Right now, the ice is a sanctuary for the Buffalo Sabres. It's a good thing they like it so much, because they're about to see a lot of it," writes Mike Harrington.

The rate represents a drop of more than 5% in just over a month and marks the five-county region's lowest average rate since the first week of November 2020.

At 57, Smith has seen a lot in a hockey career that included three Stanley Cup victories with the Edmonton Oilers. But nothing compares to this.

The Editorial Board: Bringing fans back to KeyBank Center will be test of keeping indoor venues safe

"New York State’s plan to start bringing back fans into large sports venues such as KeyBank Center is a bit like a “learn to skate” class," writes The News' Editorial Board. 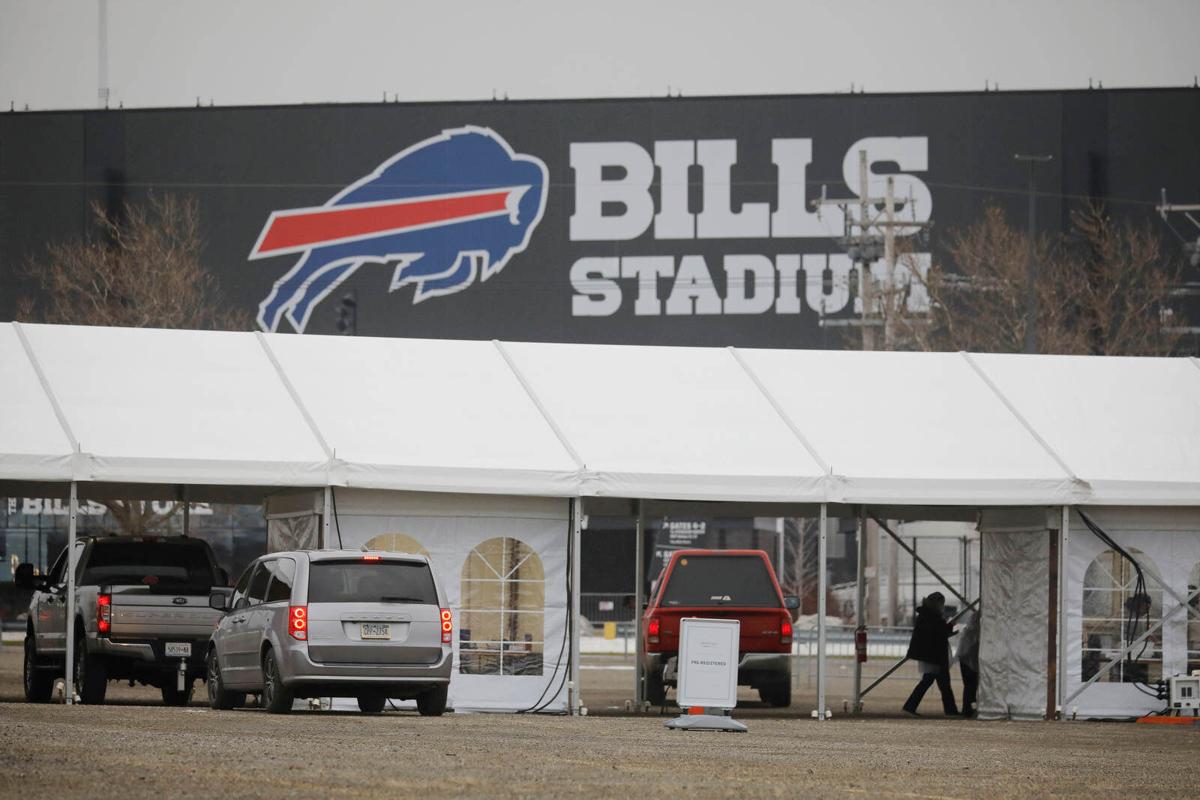 Staff from BioReference Laboratories collect samples from Bills fans with tickets to Saturday's playoff game at a drive-up Covid-19 testing site in a parking lot outside Bills Stadium in Orchard Park, Wednesday, Jan. 6, 2021. 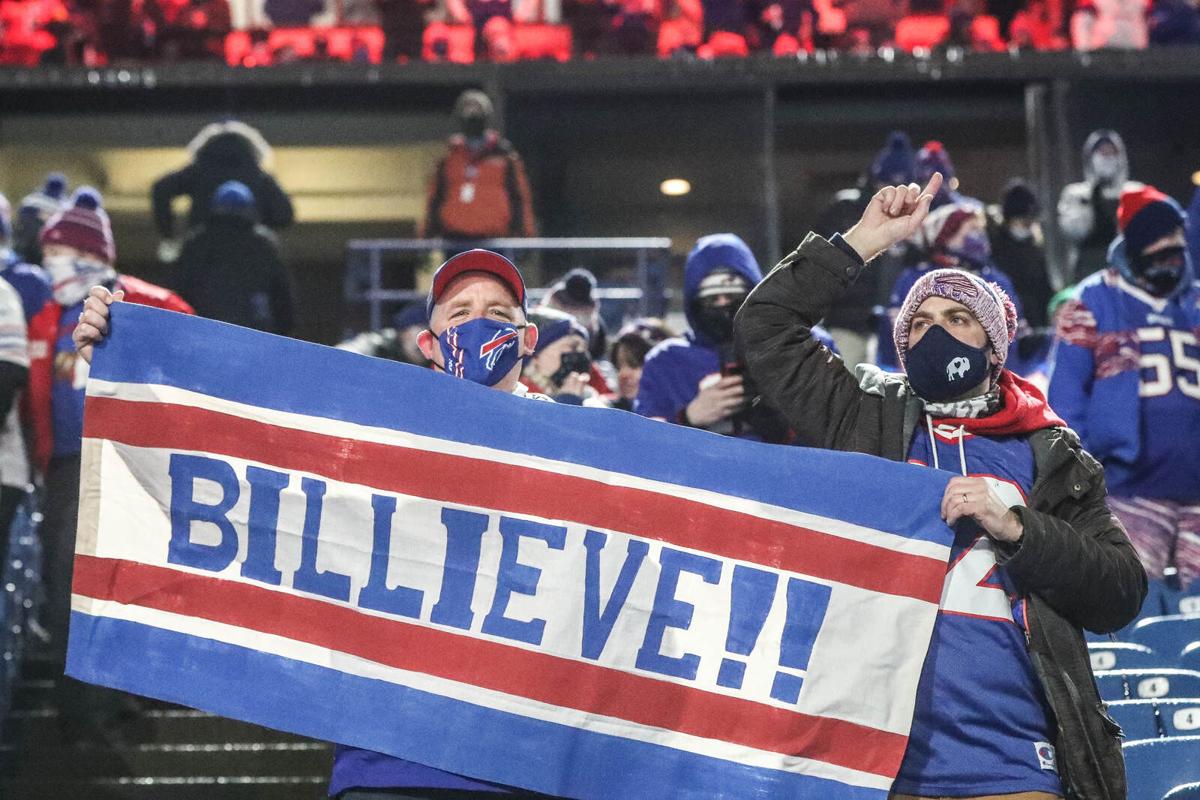 Bills fans celebrate before the AFC divisional round playoff game against the Baltimore Ravens at Bills Stadium in Orchard Park, Saturday, Jan. 16, 2021.