For more than a decade, Andrew M. Cuomo dominated the politics of New York State.

He may have sparred with his own Democrats and ignored opposing Republicans in recent years. But his persona of power and omnipotence often overwhelmed any effort at challenge.

Now New York's 56th governor is leaving the scene, the consequence of his own human failures. And following his Tuesday resignation announcement stemming from a host of sexual harassment allegations, the next era in New York government and politics dawns. Though his lieutenant governor – Kathy Hochul of Buffalo – is expected to seamlessly succeed him, a new cadre of Democrats will arrive with her in a monumental changing of the guard.

Major changes in Democratic policy will probably not occur, say Albany observers. Changes in tone will. Rep. Brian Higgins, D-Buffalo, predicts a "new kind of politics people will like very, very much."

"In the end, politics is a people profession, and nobody is more prepared for that than Kathy Hochul," he said Tuesday, noting the incoming governor will prove a "stark contrast" to Cuomo.

"Kathy is perceptive, but does not suffer fools," he added. "She knows when she's being bamboozled and will not tolerate it. It's the same toughness, but compassionate toughness."

It may be difficult for some of Albany's old hands to imagine the Capitol without a Cuomo. His father, the late Gov. Mario M. Cuomo, established himself as a statewide figure beginning in the 1970s as secretary of state, lieutenant governor under Gov. Hugh L. Carey, and then three-term governor. Even then, Andrew Cuomo had arrived and begun to make his mark.

Now, Hochul signifies the passing of the torch, replacing much of the Cuomo team and all that came before. She hails from Buffalo, while every predecessor for the past century claimed downstate roots. She is the first woman to occupy the historic office on the Capitol's second floor, and is expected to tap into a new pool of talent to guide her through at least her term ending in 2022.

Some of the new era will manifest itself within the Democratic Party as others join a scramble to fill the Cuomo vacuum, said Jacob Neiheisel, associate professor of political science at the University at Buffalo. It could mean new political efforts for potential gubernatorial aspirants like Attorney General Letitia James, Comptroller Thomas P. DiNapoli, Rep. Thomas R. Suozzi of Long Island, New York City Public Advocate Jumaane D. Williams or New York Mayor Bill de Blasio – while nobody discounts Hochul, even though she is the first upstate governor in more than a century.

"If a politician thought of himself as potentially a good governor, this is a good opportunity," Neiheisel said, "the first opportunity in a long time."

Policy will also enter the discussion, he said, labeling Cuomo a "stumbling block for the left wing of the party" over the past several years. Issues such as taxing the rich were stymied by the governor, he said, even while promoting progressive legislation like same sex marriage and the strict gun control law known as the SAFE Act.

Left wing Democrats could seize the moment, he noted, while others in the progressive movement – like the Cuomo nemesis Working Families Party – could hardly contain their glee at the governor's departure and even called for continued impeachment "so that Andrew Cuomo is never again elevated to a position of power.”

"The culture of bullying, abuse, and corruption under Andrew Cuomo has finally been brought to an end," said party Director Sochie Nnaemeka. "We look forward to working with our champions in the legislature to address the urgent issues facing working New Yorkers across our state, including record rates of homelessness, the slow disbursement of rent relief and the Excluded Workers’ Fund, and deep inequities in health care."

Republicans, who have not elected a governor since George E. Pataki in 2002, were also basking in the moment Tuesday. Rep. Lee Zeldin of Suffolk County, the front runner for next year's GOP gubernatorial nod, immediately set his sights on Hochul in a fresh appeal for campaign funds.

"Unfortunately, for New Yorkers, we’re left with Cuomo’s lieutenant, who empowered this disgusting behavior while Andrew Cuomo cultivated this toxic culture, leaving a trail of victims in its wake," he said. "Kathy Hochul has been silent scandal after scandal, from fatal nursing home policies and coverups to rampant harassment, intimidation, bullying and abuse."

And state Republican Chairman Nicholas A. Langworthy predicted a Democratic "civil war" as so many potential successors jockey for position.

Reaction pours in after Cuomo steps aside

Read what many politicians had to say soon after Gov. Andrew Cuomo announced his resignation.

"Whether it's Kathy Hochul, Tish James or Tom DiNapoli, they were all complicit believers in the way Andrew Cuomo ran New York," he said, touting Zeldin as an alternative.

"Lee, as the presumptive nominee, is building a coalition of voters in the Republican Party and people of all party affiliations," he said. "People have just had it the way government has fumbled under one-party, Democrat rule."

But Evan Stavisky, a Democratic consultant based in Manhattan, notes the "vacuum" created by Cuomo's imminent departure will be filled by Hochul and life in the Capitol and beyond will resume. He rejects Republican aspirations, even as the party has elected governors in blue states such as Massachusetts and Maryland.

"New York is fundamentally a Democratic state," he said. "Republicans like Charlie Baker in Massachusetts and Larry Hogan in Maryland are more independent and a Republican like that is incapable of winning a primary in New York. They'll nominate someone from Trump world ... and that is functionally incompatible with New York voters."

A defiant Cuomo denied groping any women, but apologized for his actions in a 30-minute resignation speech broadcast exactly a week after Attorney General Letitia James released the scathing results of an investigation into accusations Cuomo sexually harassed 11 women.

The Editorial Board: No more three (white) men in a room, but Albany's reputation for corruption remains

"When the three high-ranking elected officials next meet to hammer out a state budget it will be one white woman, one Black woman and one Black man," writes The News' Editorial Board.

Hochul's rise latest boost for women in politics, but it's 'a long game' 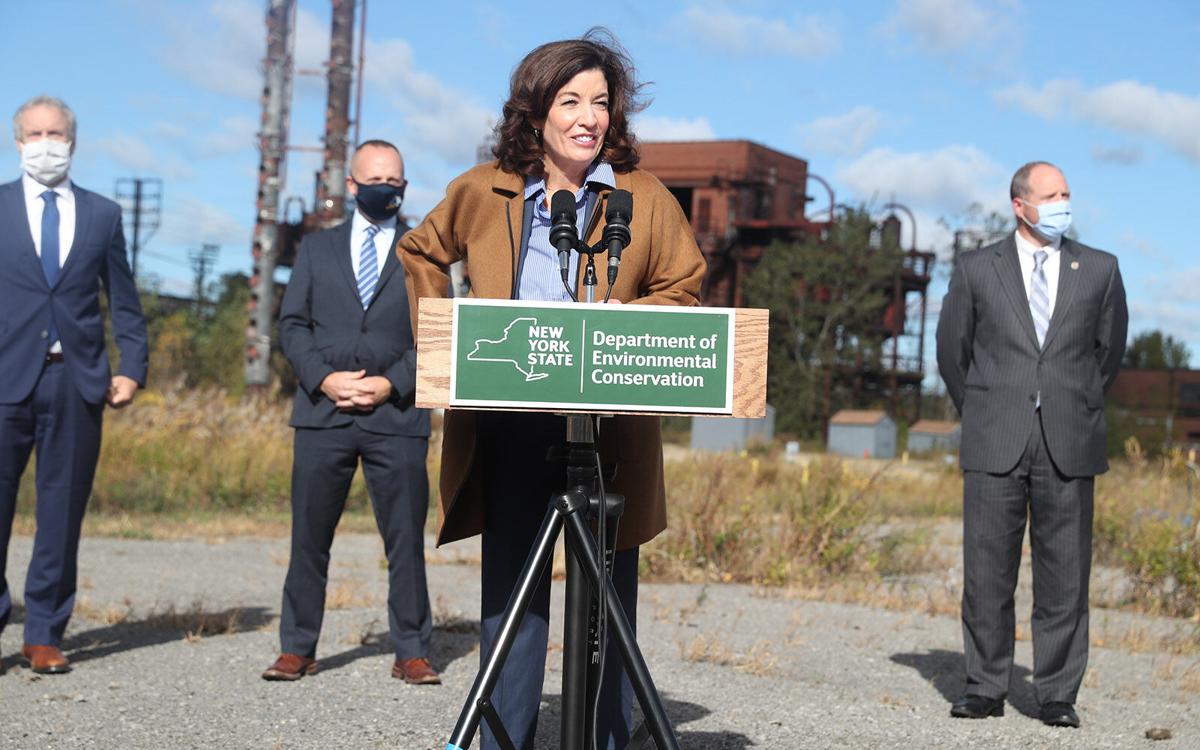 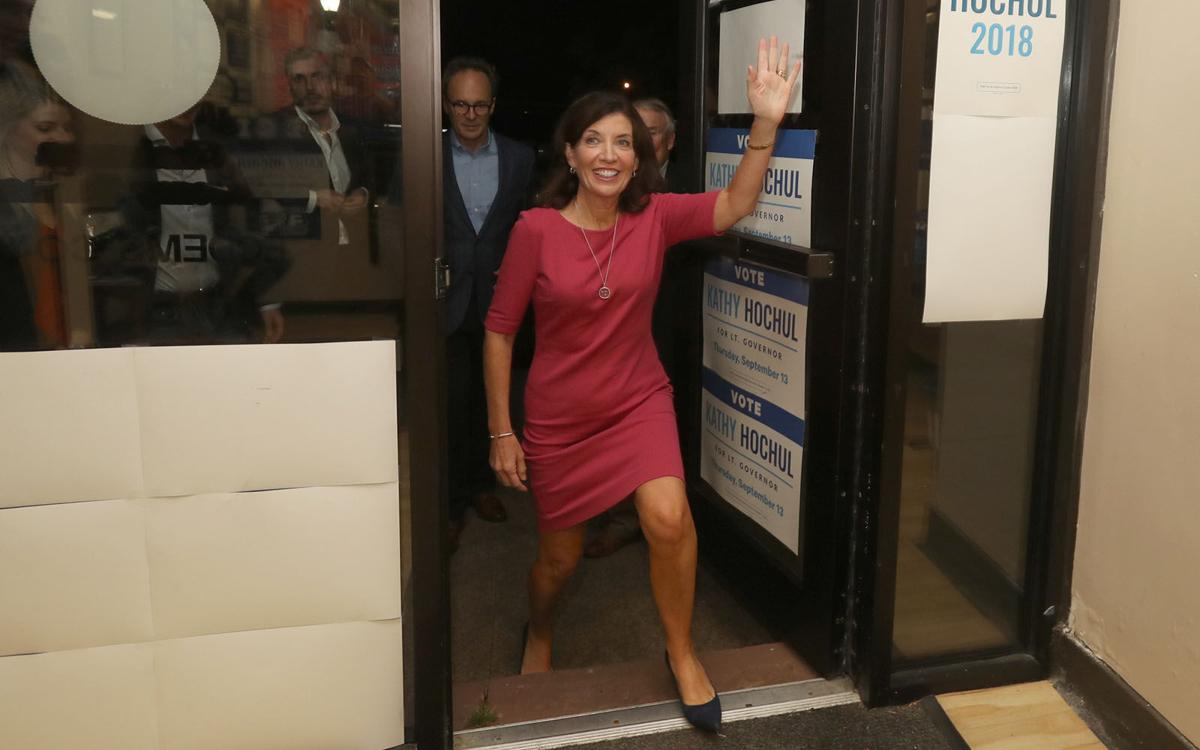