Braves vs Astros: A World Series six decades in the making

A 'survivor:' Kathy Hochul has a history of surprising political victories
0 comments
Share this

More often than not, the stars, moons and planets of New York's political heavens have aligned perfectly for Kathy Hochul.

From rising through former Chairman Joseph F. Crangle's Democratic organization, to her appointment and subsequent election as county clerk, to the three-way race allowing victory in a Republican congressional district, to her selection as Gov. Andrew M. Cuomo's running mate, opportunity has always followed Hochul.

Even missed opportunities have served her, like resisting party pressure for a county executive run in 2011. That paved the way for the successful congressional bid that year following Rep. Chris Lee's unexpected resignation. And her 2012 reelection loss to Republican Chris Collins eventually proved fortuitous, freeing her for Cuomo's choice as his 2014 running mate.

Now the Buffalo resident, New York's 77th lieutenant governor, is poised to emerge as the ultimate survivor of New York politics. As Cuomo precariously clings to power in the face of sexual harassment allegations, the twists and turns of politics present another opportunity. If Cuomo leaves office through either resignation or impeachment, as is widely expected, Hochul will begin another chapter in her career – as governor of New York.

And New York's political establishment – dominated by men from New York City – must also brace something new – a woman governor from upstate. Former Rep. John J. LaFalce, whom Hochul has often called her mentor, says she will weather the new challenge, too.

"Anybody who dismisses Kathy is just not seeing straight," he said. "Never dismiss Kathy."

Hochul may have established herself as a statewide force in her own right while running for a second term with Cuomo in 2018. The process did not begin well, as The Buffalo News reported in April that Cuomo forces were angling to dump her from the ticket after Jumaane D. Williams, a New York City councilman from Brooklyn, launched a primary challenge against her. Williams, now the city's public advocate, loomed as a powerful sitting office holder in the state's densest concentration of Democrats.

Conventional wisdom pointed toward thwarting Williams with a new, downstate running mate. And Cuomo hardly came to her rescue. In Buffalo, he told reporters that he fully backed Hochul – but for her old congressional seat. The lieutenant governor held firm, however, walking a fine line as Cuomo loyalist while fending off those seeking her ouster.

In the September Democratic primary, Hochul prevailed with a convincing victory over Williams, now considered a future statewide candidate. And the Western New Yorker even captured three of the city's five boroughs – Queens, Staten Island and the Bronx – to win her second statewide primary (she also beat Tim Wu in 2014).

LaFalce credits her "tenacious" work ethic for the 2018 victory, which served her well as she traveled the state touting Cuomo's programs.

"She visited not only every county in New York State, but every town and village and every borough in New York City," he said. "And in every single instance, when she left, people liked her."

Hochul, 62, may have not only survived but prospered in New York politics because of that ability to connect with people. Whether mingling with Batavia senior citizens or visiting a Brooklyn community center, the Hamburg native from an Irish Catholic family may practice retail politics as well as anyone. Unlike Cuomo, who usually appears only before invited audiences and rarely mingles with ordinary citizens, Hochul relishes any chance to plunge into crowds.

Leonard R. Lenihan, the former Erie County Democratic chairman who has worked closely with her through the years, says Hochul has succeeded throughout the state by easily winning over movers and shakers.

"She's humble, she's kind, but she's also tough," he said, "with a friendly and approachable demeanor. And not all politicians are approachable.

"I think everyone will soon grasp the contrast between the departing governor and incoming governor," he added. "Her style is: 'Hey, isn't it a great honor to represent the people of this state?' "

The lieutenant governor has never shied away from Erie County's hardball brand of politics, but somehow emerges from tough battles with new friends. Republican William A. O'Loughlin, whom Hochul decisively defeated for county clerk in 2007, goes out of his way to greet Hochul and her husband, Bill, if he encounters them in public.

Hochul decisively beat O'Loughlin 67%-33% that year as both candidates opposed then-Gov. Eliot L. Spitzer's plan to issue driver's licenses to illegal immigrants. The losing Republican said he left the political arena with lasting impressions about his opponent, and has followed her since as a congresswoman and lieutenant governor.

"She became a powerful juggernaut in the City of New York and she doesn't even live there," he said. "Those who underestimate her power, strength and talent are doomed to their own execution."

Along the way, however, Hochul has earned a reputation for flip-flopping on political issues. When representing New York's most Republican congressional district, she earned a 100% rating on gun rights issues from the National Rifle Association. As Cuomo's lieutenant governor, she supported his strict gun control law known as the SAFE Act.

Also with Cuomo, she performed a turnaround and supported driver's licenses for undocumented immigrants. And though consistent in her support of abortion rights, an ugly 2012 town hall meeting in Lancaster remains one of the lowlights of her congressional career. She was booed by a crowd critical of her support for certain reproductive rights for women and the conflict with her own Catholic faith.

Christopher M. Grant, the Clarence political consultant who managed former Rep. Chris Collins' successful congressional campaign against her in 2012, remains especially critical of his old adversary. He says Hochul will fit in with other "fraud" governors like Spitzer and Cuomo, because she has "no commitment to principle."

He cites her changes on issues upon arriving in Albany, that she triumphed over Williams in the 2018 primary only after the Cuomo team came to her rescue, and that Collins recognized her weaknesses early en route to beating her in 2012.

"We didn't have to convince a lot of people that she was a phony," he said, "and we found she couldn't take the heat. When we saw a candidate come unglued that easily we knew we had a winning message."

Grant, who manages GOP campaigns around the nation, acknowledges Hochul has scored her share of wins and now stands on the cusp of the top political job in New York, and that she is a survivor.

"To me, there are survivors as a function of skill and of luck – I think she is the latter," he said. "She is not a skilled politician as much as a lucky one, and that will be on full display in coming months."

And in a possible sign of Republican strategy to come, state Chairman Nicholas A. Langworthy has in recent months set her squarely in his sights. When accusations of harassment began surfacing against the governor in March, Langworthy demanded Hochul reveal her knowledge of the administration's response to the allegations, as well as to hiding data on nursing home deaths stemming from Covid-19 – even if few Albany hands count her as among the governor's inner circle members.

"She talks about how she's the governor's right hand and she's working directly with Andrew Cuomo to get so many great things done," the chairman said then. "If you don't know what was going on in the administration, what the hell were you doing?"

But as Hochul prepares to claim the historic gubernatorial office on the Capitol's second floor, her "survivor" status will require more challenges. Though she stands to become the office's first female occupant, her upstate address may prove her most serious impediment to running and winning in 2022. No true upstater has been elected governor since Nathan L. Miller of Syracuse in 1920, no Buffalonian since Grover Cleveland in 1882, and she is currently the only person outside the metropolitan area to hold statewide office.

Though she must overcome the Democratic Party's downstate domination, some say her past history may point to her ability to break another barrier. Lenihan, for many years the leader of upstate's largest Democratic contingent, notes she has spent almost six years criss-crossing the state while Cuomo is usually ensconced in his Albany bunker.

Hochul, he said, has made a career out of meeting with officials of small towns, upstate cities and throughout New York City. That includes leaders of Democratic county organizations, he said, many of whom have become her friends. She will have 10 months before the party names its next candidate for governor, and as the incumbent will hold the overwhelming advantage in raising money.

"I know I'm a 'homey' on this, but who else could be better prepared?" he asked. "She will have a full year ahead, and it will be refreshing to have the first female governor of the state with the opportunity to show what she can do."

Photos: Kathy Hochul through the years

The abrupt resignation of Melissa DeRosa, sharply criticized by the state's top lawyer for her handling of sexual harassment allegations against the governor, was a simple and direct sign: Cuomo's ability to hold onto his job is evaporating by the hour.

'She is acutely ready for this': Hochul prepared for call to become governor

Kathy Hochul walks a fine line between her duties as lieutenant governor and potentially replacing Cuomo. Those around her say she is preparing for what lies ahead. They also say she is ready.

From The News' archives: Who is Kathy Hochul?

Buffalo native Kathy Hochul will become the next governor of New York State.

She said the state will also be moving ahead with a public service campaign and new patient rights’ notices to ensure health care providers and patients fully understand the state’s abortion access laws. 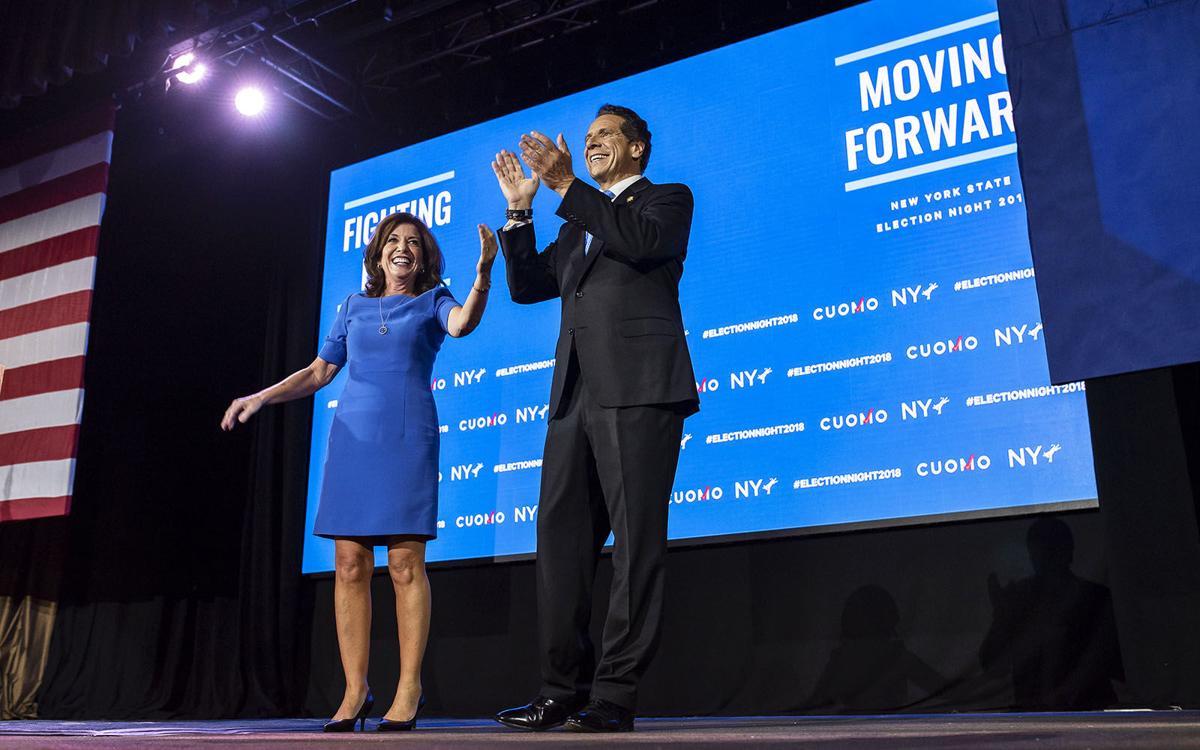 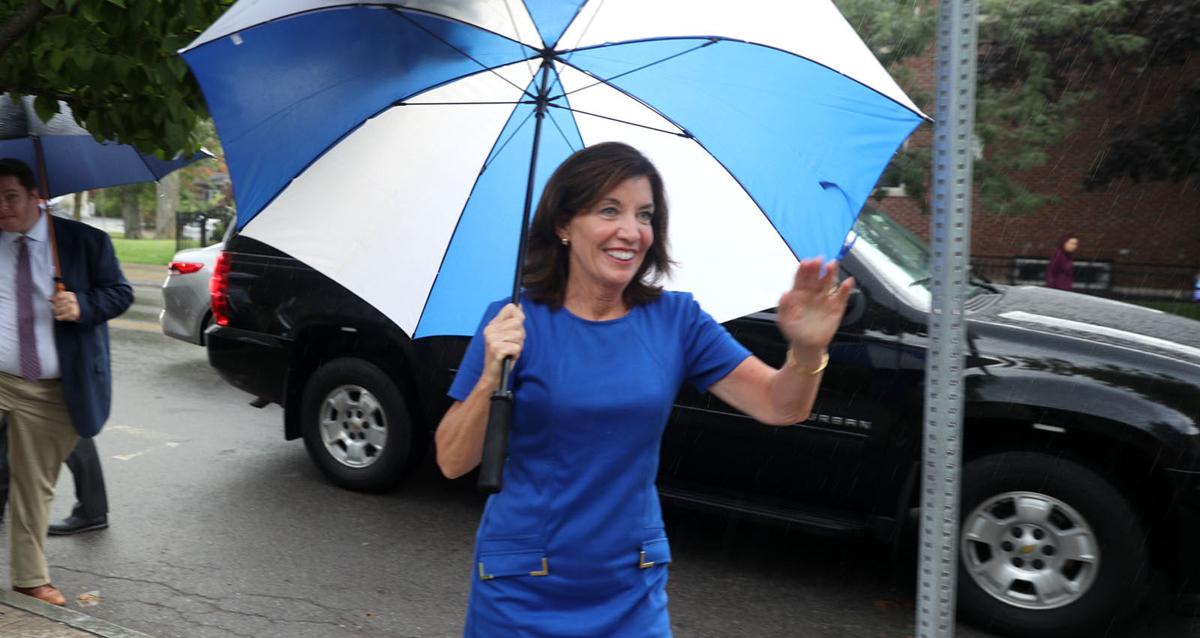 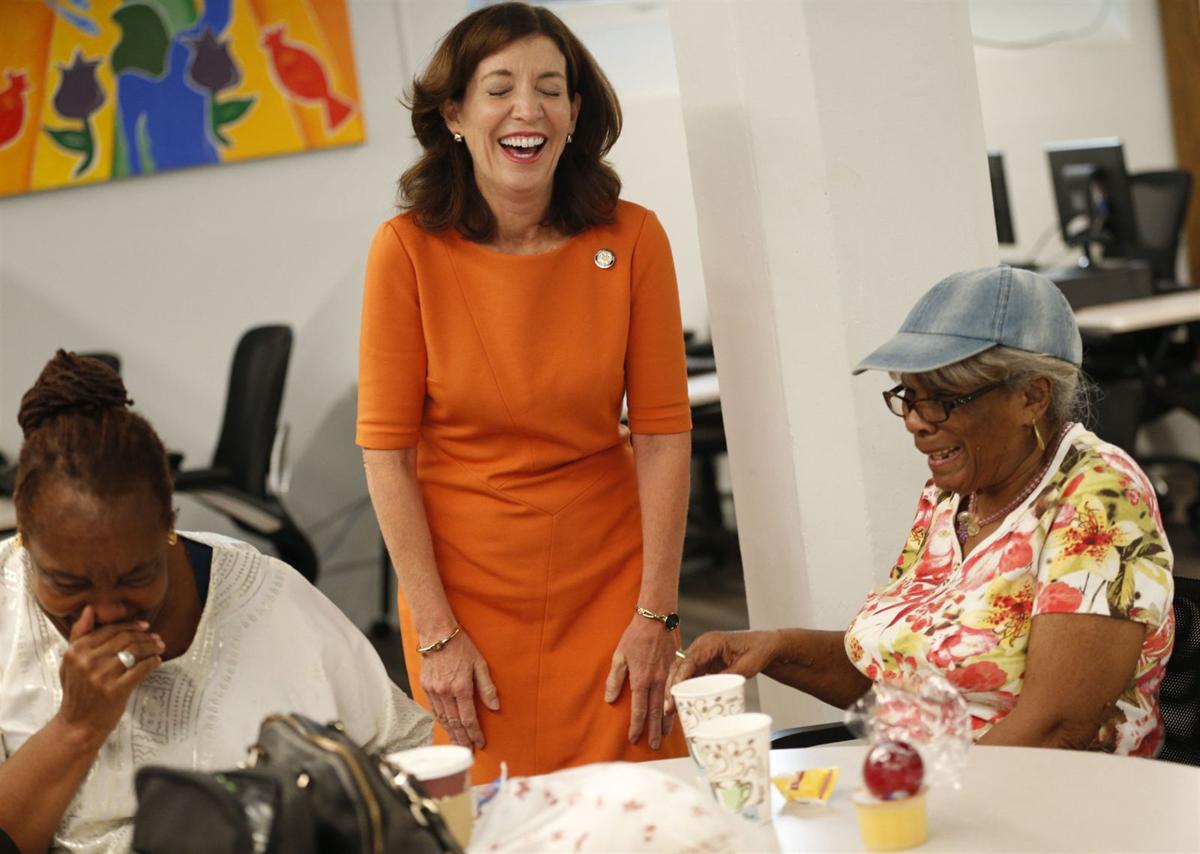 Lt. Gov. Kathy Hochul has some laughs with Estoria Dent, left, and Willie Milds, right, as she campaigns at the Park Slope Center for Successful Aging in Brooklyn on Aug. 30, 2018.