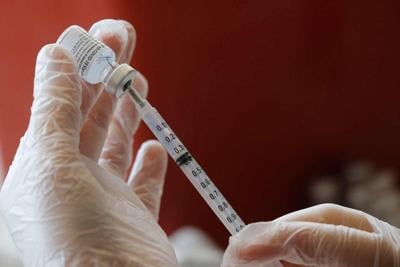 If they lose their jobs, it would cause even greater labor shortages among those caring for the state’s most vulnerable residents.

And though it remains an unknown on how many workers will either resign or be terminated for refusing to get the vaccine, industry trade groups say some facilities may be forced to close.

Gov. Kathy Hochul on Wednesday said she will announce a plan to replace health care workers who refuse to be vaccinated.

Some 15,000 nursing home residents statewide have died due to the Covid-19 virus, but thousands of nursing home workers have declined to get vaccinated.

On Monday, when the state mandate requiring nursing home workers to have at least one shot of the vaccine starts, the workers’ vaccination refusal is expected to worsen understaffing at some facilities.

However, there is uncertainty about the mandate's impact because of a federal lawsuit. The lawsuit challenges the state mandate because it lacks an exemption for workers who decline the vaccine on the grounds of religious beliefs.

An Oct. 12 hearing on the lawsuit in a Utica courtroom could determine what happens to the mandate and how that will impact staffing.

The state mandate comes on top of a similar federal mandate that could begin sometime in October with the possibility of withholding Medicare and Medicaid funding to facilities who do not comply.

At Ellicott Center for Rehabilitation and Nursing in Buffalo, 62% of the staff has not been fully vaccinated as of Monday, according to data the facility provided to the state Health Department.

That’s the lowest percentage among the 70 nursing homes in the eight-county region, according to the state Health Department.

Thirty-eight percent of the Ellicott Center staff has been fully vaccinated compared with the 71% average among nursing homes in the region.

And Ellicott Center is already understaffed. The U.S. Centers for Medicare and Medicaid Services gives it a “below average” two-star rating for staffing.

“These are difficult times for the post-acute care industry with regards to forecasting staffing, but Centers for Health Care will do every legal means possible to make sure our residents are fully cared for,” said Jeffrey Jacomowitz, spokesman for the New York City company that owns Ellicott Center.

The nursing home has been “strongly encouraging staff to get vaccinated since January,” Jacomowitz said.

Meanwhile, at Rosa Coplon Jewish Home and Infirmary, an Amherst nursing home with 60% of the staff fully vaccinated, according to the state data, management is continuing to promote the vaccine, but is also preparing for possible staffing shortages due to the mandate.

“Our staff doctor has been answering workers’ questions and we are doing significantly better with vaccinations. We have a steady stream of workers getting the vaccine in-house on a daily basis,” said Ken Rogers, chair of the board of directors at the Weinberg Campus, which includes the nursing home.

The 180-bed home is under 70% occupancy, which allows for leeway in staffing assignments, he said.

The facility will continue to hire temporary agency workers to fill openings and pay overtime to staff members, Rogers said, noting that is an industrywide practice to address shortages.

The other element in overcoming expected challenges from the mandate is maintaining a positive attitude, Rogers said. “We have been preparing for this and our mantra internally is: ‘We will make this work.’ ”

Most workers vaccinated at some facilities

There are nursing homes in Western New York that have managed to get most of their workers vaccinated.

Orchard Rehabilitation's administrator said his workers were eager to be vaccinated after the nursing home was blindsided by the Covid-19 deaths of 23 residents over approximately three weeks.

“Everyone stood in line to get the vaccine. There wasn’t even a push. There was very little resistance. Those who were nervous came around and got the vaccine,” said Martin MacKenzie, the administrator.

MacKenzie, who is also a registered nurse, said the virus has tested him and his staff like no other year in his 30 years in the industry. In addition to the deaths, the state fined his nursing home $22,000 in May because of infection control violations related to Covid-19.

“Quite honestly, I’m very, very proud of the staff and the community that supported us,” he said.

But with many nursing homes struggling to convince workers to receive the vaccine, an industry spokesman said the vaccine mandates will make the crisis situation even more challenging when it comes to resident care.

“ … any loss of employees is detrimental to the necessary provision of essential long-term care services,” said Stephen B. Hanse, president of the NYS Health Facility Association and NYS Center for Assisted Living.

In a recent letter to the state Health Department, Hanse said 99% of 201 nursing homes his organization surveyed have vacancies for full-time certified nursing assistants and 98% have registered nurse vacancies.

Seventy-eight percent of the nursing homes expressed concern that “workforce challenges might force them to close,” while more than one-third were “very concerned about having to shut down,” according to the survey conducted by the American Health Care Association and National Center for Assisted Living, which represents some 14,000 facilities.

Advocate: Workers should be vaccinated

“I am very concerned about the staffing shortage, which has long been acute in New York’s nursing homes and will quite possibly be exacerbated when the vaccine mandate is implemented," he said. “However, federal law mandates that nursing homes only accept and retain residents for whom they have sufficient staff to provide good and humane care. If staffing goes down, they must be held accountable for complying with this basic safety requirement, such as by stopping new admissions.”

“As a result, we are now faced with this terrible situation. Nevertheless, I don’t think that putting residents in harm’s way by allowing them to be exposed to unvaccinated staff is the answer,” he said.

At Safire of Northtowns in the Town of Tonawanda, 39% of the staff is vaccinated – the second lowest percentage in the region.

Gail Logan, a 74-year-old who has resided there for seven years, said she is worried about the impact of the vaccination mandates. Staffing at the facility has been so low at times, she said, that residents will yell from their rooms for assistance.

“A lot of the staff have told me they do not want to get the vaccine, but they don’t tell me why. They just don’t want it,” said Logan, who suffers from cerebral palsy and is unable to get around on her own.

“I can’t walk and I was recently left in my chair from 4 p.m. until 11 p.m. and I could not get to my call bell,” she said, recalling how staffing has affected her.

The federal government rates the staffing at Safire Northtowns at three stars, or “normal.”

Michael Balboni, an industry trade group leader who represents Safire Northtowns, said management “has done everything it can to encourage vaccinations” among workers.

But he said he believes the union representing workers has not done enough.

“We had hoped that the union might be an advocate for getting union members vaccinated, but we have seen mixed results in their efforts,” Balboni said.

April Ezzell, a spokeswoman for Local 1199, Service Employees International Union, which represents Safire Northtowns workers, said the union has been promoting the vaccine.

“Since the vaccine became available, 1199SEIU has strongly encouraged our members to get vaccinated. We continue to do so,” Ezzell said.

Balboni said Hochul’s forthcoming plan to cope with staffing shortages caused by the mandate could serve as a bridge until a permanent solution is reached.

"There’s many questions and I applaud the governor for trying. She recognizes the risks that come with the mandate,” Balboni said.

Other industry officials have presented recommendations to fix the workforce shortage in long-term care. They include:

• Allowing unvaccinated workers to continue to work on a temporary basis as long as they receive regular Covid-19 testing and use personal protective equipment.

• Training certified nursing assistants to administer medication, freeing up nurses for other duties.

• Urging federal and state lawmakers across the country to prioritize long-term care by providing additional funding for competitive wages and training programs.

If necessary, Gov. Kathy Hochul said she will sign an executive order declaring a state of emergency to fortify state and local medical systems.

Nursing homes with most unvaccinated workers among WNY's worst-rated

At 12 nursing homes across the state, more than 20% of workers had not received a Covid vaccination as of Wednesday.

New York State’s Health Department says it will soon issue guidelines to implement a new law that requires nursing homes for the first time to clearly publicly disclose if their facilities do business with a company in which their investors or their families have an ownership interest.

"It's the smart thing to do and we have to continue the mandates," the governor said. "This is not intended to be dictatorial; this is intended to save lives." 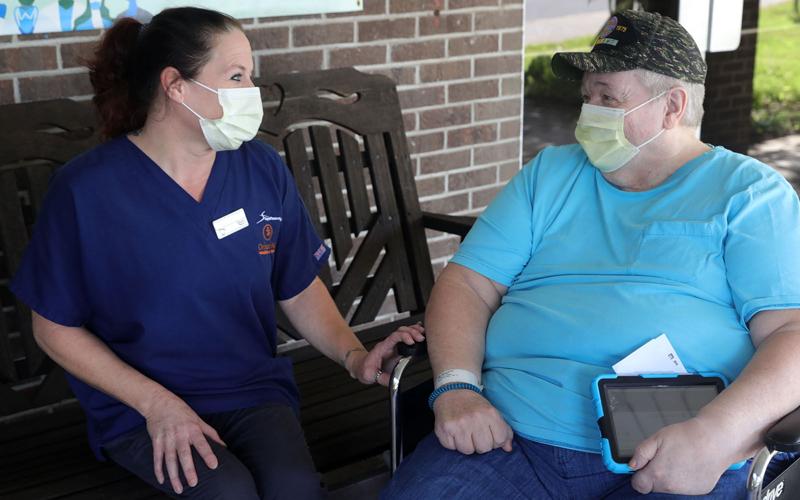 Ann Cheatham, a certified nursing assistant at Orchard Rehabilitation and Nursing Center who was one of the nursing home's first workers to get Covid-19, talks with Bob Hale, president of the resident council there on Monday. Eighty-eight percent of Orchard Rehabilitation's workers, including Cheatham, have been fully vaccinated against Covid-19, one of the highest rates among the 70 nursing homes in Western New York. Hale's mother, who was also a resident at the nursing home in Medina, died from Covid-19. 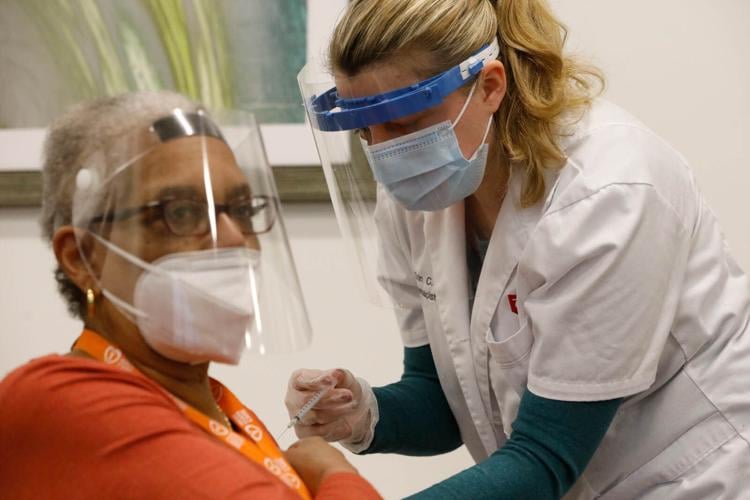 Pharmacist Erin Carroll administers a shot with the Covid-19 vaccine to Director of Nursing Jackie Engram during a clinic for staff and residents of the Ellicott Center for Rehabilitation and Nursing in Buffalo, Monday, Dec. 28, 2020. 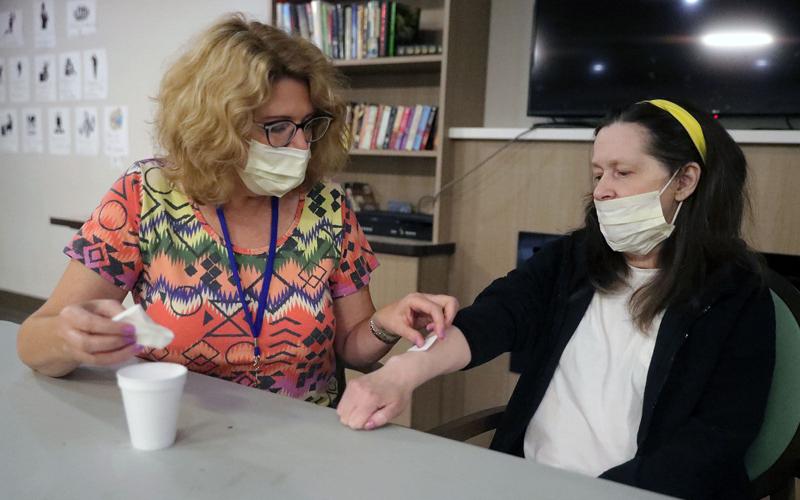 Jamie Murphy, left, activities director, puts a butterfly water-based tattoo on Terri Cole, a resident at Orchard Rehabilitation and Nursing Center in Medina on Monday, Sept. 20, 2021. Both had Covid-19, but have been gotten vaccinated.