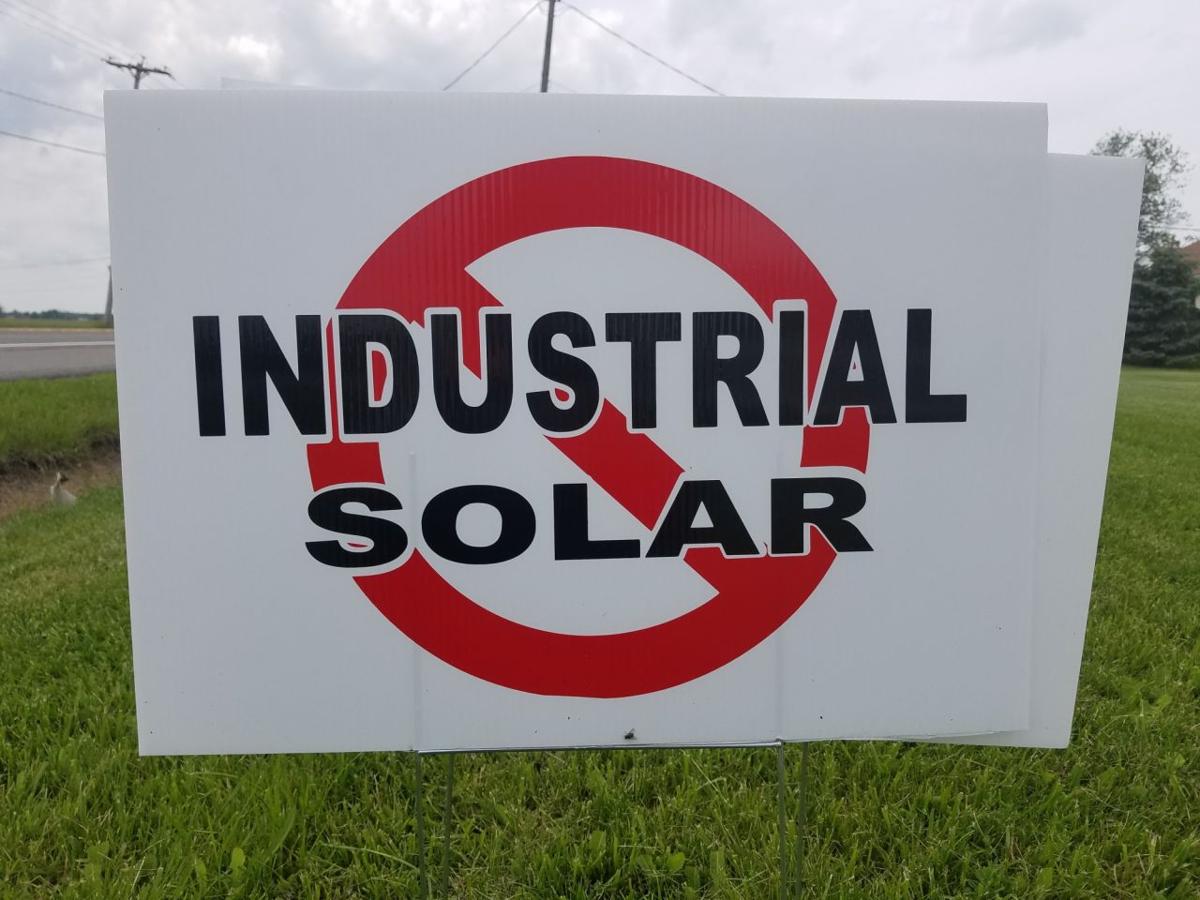 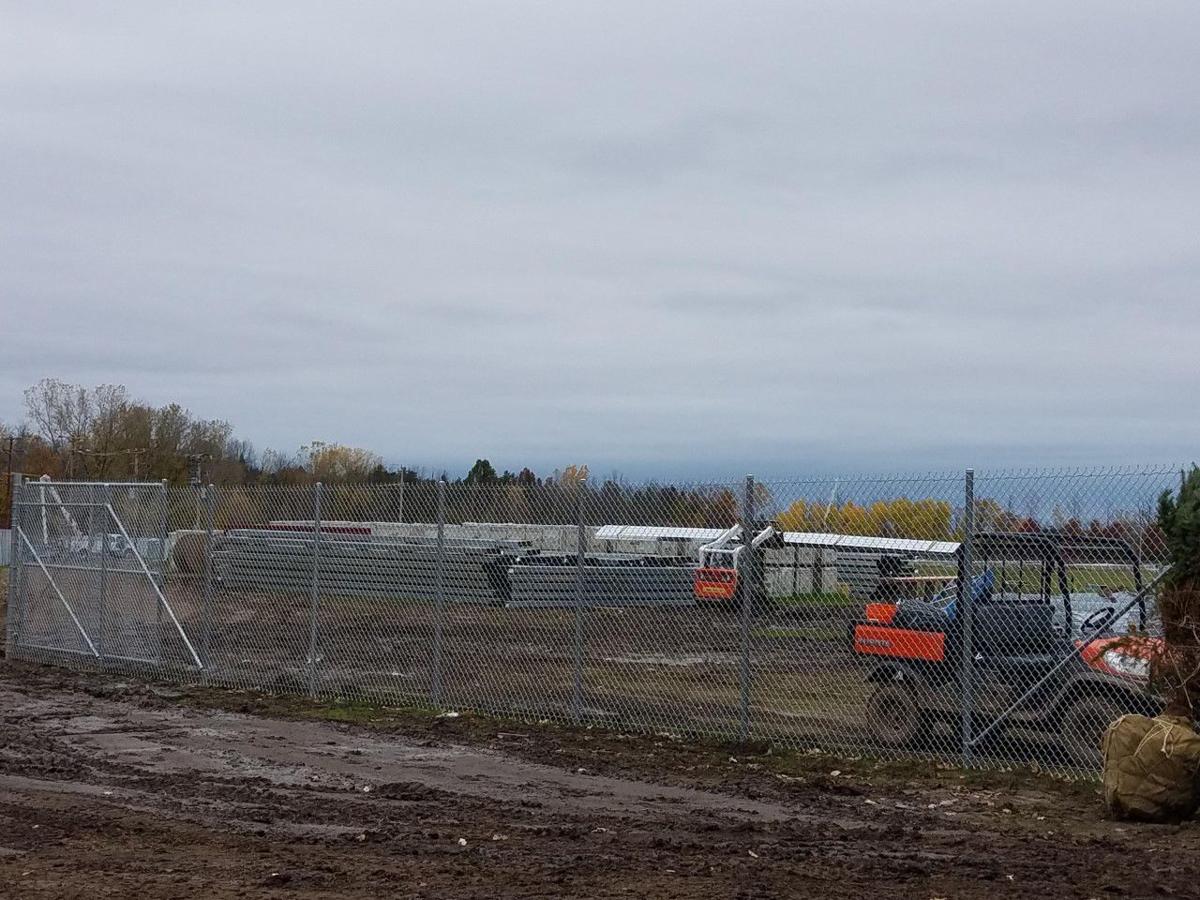 The beginning stages of construction on a solar farm on Moore Road in Lewiston Oct. 30, 2019. (Thomas J. Prohaska/The Buffalo News) 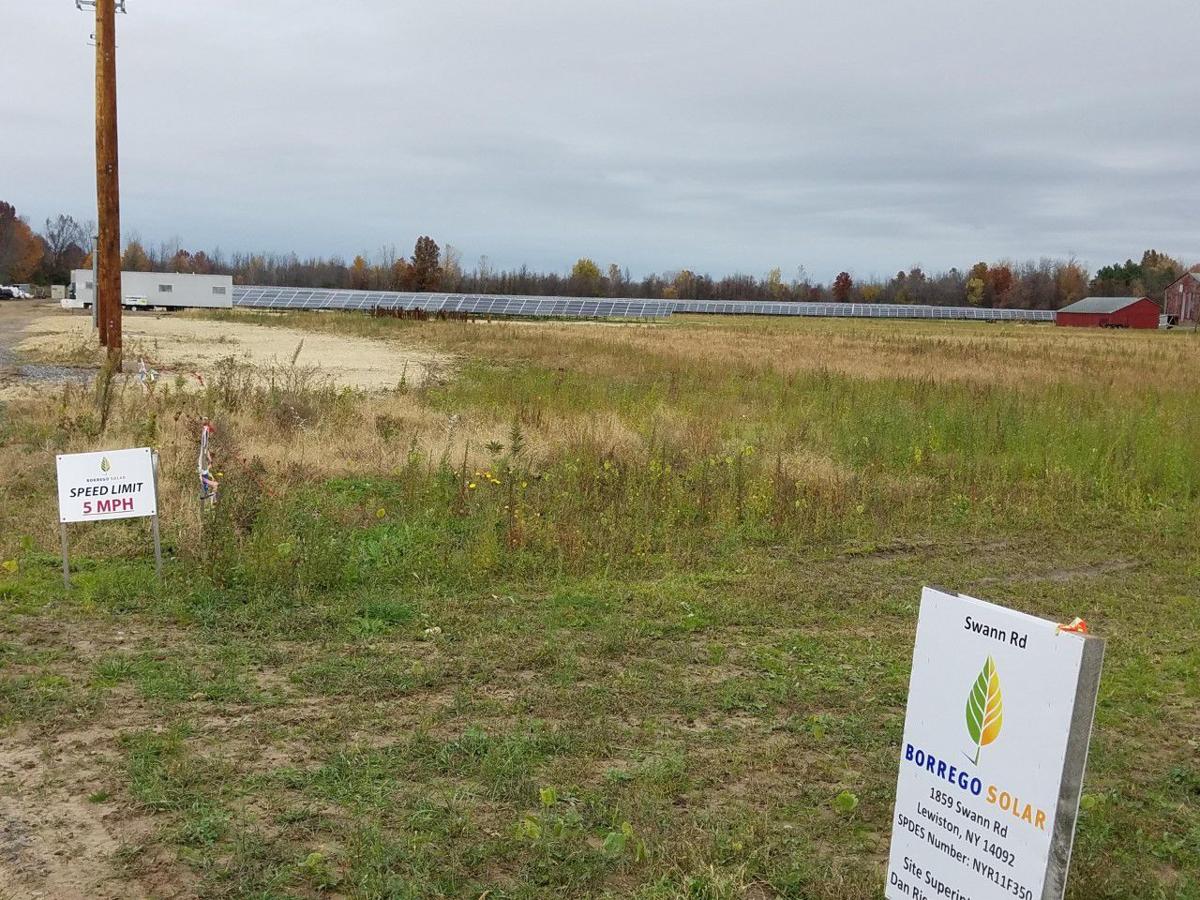 The solar power project at Timothy Masters' farm as seen from Swann Road in Lewiston on Oct. 30, 2019. The same company, Borrego Solar Systems, was approved for a similar project on Williams Road in Lewiston and is seeking approval for one on Ridge Road. (Thomas J. Prohaska/Buffalo News)

Solar power companies are beginning to take a more aggressive approach to gain support for their projects, playing up the financial benefits for host communities.

EDF Renewables, the San Diego developer pursuing the Ridge View Solar project in Newfane and Hartland, has offered $32 million over 25 years to the towns, the county and the affected school districts. Its proposed 2,000-acre project would generate enough electricity to power 75,000 homes.

"This is probably the biggest thing that's ever hit the Town of Hartland, as far as impact on our town," said Hartland Supervisor W. Ross Annable.

The proposed solar project in Hartland and Newfane has become the latest to face opposition from an organized public group. Another citizen group is fighting a 900-acre solar plan in Cambria and Pendleton.

Some of that opposition showed on Election Day, when Annable, whose name was the only one on the ballot, was held to 55% of the vote by a solar power opponent's last-minute write-in candidacy.

In Cambria, Councilman Joseph Ohol, whose family has leased land to a solar developer, finished last among four candidates for the Town Board.

Opposition to solar projects also has surfaced in Lewiston, where the Town Board plans to vote as soon as Nov. 20 on a one-year solar moratorium. One solar farm in Lewiston is nearly complete, a second is under construction and a third is proposed, although the projects are far smaller than the ones farther east.

The solar fight may shift next to Royalton, where a 178-acre parcel is the site of another proposed solar project.

So developers count on the financial benefits to a host community as a way to gain support.

"If the town residents are good with not having it, great," Annable said. "If they are, that's what we're trying to discern."

"EDF Renewables is sensitive to designing a project that is well received by the community and can be well integrated into the area," said Kevin Campbell, project manager for EDF Renewables.

On Oct. 30, Cypress Creek Renewables, the California company whose Bear Ridge Solar project would cover 900 acres of agricultural fields in Cambria and Pendleton, announced a $10.3 million package of payments for the towns, Niagara County and the Starpoint Central School District.

Asked if he was interested in the deal, Cambria Supervisor Wright H. Ellis replied simply, "No."

"It's an acknowledgement by Cypress Creek that the Bear Ridge Solar project will be very disruptive to our community, and this is an effort to soften that disruption," Ellis said.

The company said the towns, Niagara County and the Starpoint school district would receive 10 times more money from its offer than they do from taxes on the open land.

"Those contributions could be weighted towards upfront payments or spread out over a number of years," said Kevin Kohlstedt, the project manager, who called such agreements "typical for renewable energy projects."

Cypress Creek offered $6 million in payments or payments in lieu of taxes, plus a flat $1 million for each town and more than $2 million to be allocated pending local input.

Divided among the four taxing entities, "it's not a lot," Ellis said. The town boards and the County Legislature oppose the project.

Grand Island is home to two solar projects, one on 42 acres off Whitehaven Road and the other on two adjoining parcels of 9 acres each off Bedell Road.

There was strong opposition at first, Supervisor Nate McMurray said.

One resident filed a lawsuit to block SolarPark 2 on Whitehaven Road, claiming it would be an eyesore.

"This opposition is almost irrational in a way," McMurray said. "People have asked me if (solar panels) are radioactive. If they got hot and catch fire, can the firefighters put them out?"

The answers are no to the first question, yes to the second.

But there are key differences between the Grand Island projects and the ones proposed in Niagara County.

In Grand Island, the sites are located in industrial zones, not in agricultural or agricultural-residential zones as in Niagara County, McMurray said.

The town changed its strategy on payments in lieu of taxes from solar developers.

Deputy Supervisor James Sharpe said the town receives $5,000 a year for each of the two Bedell Road sites, which he said has virtually no impact on the town budget. The town decided to take a $100,000 lump sum for the Whitehaven project.

Combined with a franchise fee from Spectrum, the cable TV company, it was put into what Sharpe called a technology trust. Last week the Town Board decided to use it to install a conduit along Grand Island Boulevard that could carry fiber-optic cable for broadband internet service, or electric wires connecting the solar energy to streetlights.

Above the conduit, sidewalks will be installed, thanks to a $1.5 million federal grant.

Sharpe said two more solar projects are planned on Grand Island: one on 60 acres owned by the school district off Bedell Road southwest of Interstate 190, and another near the state Welcome Center on Whitehaven Road. Their PILOT fees will pay for the streetlights on Grand Island Boulevard, Sharpe said.

"It's been an extremely positive thing for Grand Island," McMurray said.

"Over 90% of the people did not know this was happening," said Michael J. Outten, leader of the group.

Outten's write-in candidacy for Hartland supervisor failed, but he said the opposition group now has 500 supporters.

"There's 11,000 acres of farmland in Hartland, and they're proposing to cover 27% of it with industrial solar panels," Outten said. "No. 1,  it's an eyesore because it's a million solar panels. It'll just destroy our rural community."

There could be a contamination risk depending on what the panels are made of, Outten said. His group also worries about the safety of the proposed large lithium batteries that would store electricity generated by the panels.

Ridge View Solar's panels would use crystalline silicon with copper and aluminum, sandwiched in glass, said Campbell of EDF.

"These types of solar modules do not contain toxic materials and are the same type that are commonly installed on rooftops and schools," Campbell said. "Solar panels rarely catch fire and are not combustible. In the unlikely event of a fire within a solar panel, it would smolder and not likely spread."

In Royalton, the newly announced Tonawanda Solar project would be on the south side of Johnson Road, east of Griswold Street, according to Michael Hartman, town assessor and code enforcement officer for Royalton and Hartland.

The project, proposed by Oriden Solar, a Pittsburgh startup, would be on a 178-acre site owned by WNY Properties of Oakfield. Hartman said it's unclear how much of the land would be covered with solar panels, because there are woods and wetlands on the parcel.

"Oriden believes this site is the ideal intersection of property features and access to the power grid," said Mike Berlin, director of development at Oriden.

Hartman said the Royalton Planning Board has approved the concept, but there has been no application yet for the variance, special use permit or rezoning the project would need.

It's a 20-megawatt project, which puts regulatory control in town hands. The state siting process only applies to projects of more than 25 megawatts.

Lewiston may use that local power this month to pass a one-year solar moratorium, Supervisor Steve Broderick said.

Neighborhood opposition to a third project in northeastern Lewiston, this one on Williams Road, led the Town Board to plan the moratorium to give it time to consider revisions in its solar ordinance.

"We've had a big public outcry in that area to say enough is enough," Broderick said.

The Moore Road project by Precision Solar Renewables of Long Island City will be surrounded with a chain-link fence and dozens of evergreen trees, project manager Darrell Hart said.

"Once they're done, actually up and screened, we'll take a look at them, see ways we can improve it," Broderick said. "We might say, 'Our law's good. We like what we see,' but without having that finished product, we don't know."

He said the projects in Lewiston may be reaching the limit of what the power grid in that area can support.

Bob Newman, managing partner of Wainfleet Companies, the major investor in Perks, announced the decision to not reopen all three of its locations in a press release Monday night.

Western New York to move to phase four of reopening Tuesday, as scheduled

Malls, movie theaters and gyms, which originally were part of phase four, have not been permitted to reopen.

The beginning stages of construction on a solar farm on Moore Road in Lewiston Oct. 30, 2019. (Thomas J. Prohaska/The Buffalo News)

The solar power project at Timothy Masters' farm as seen from Swann Road in Lewiston on Oct. 30, 2019. The same company, Borrego Solar Systems, was approved for a similar project on Williams Road in Lewiston and is seeking approval for one on Ridge Road. (Thomas J. Prohaska/Buffalo News)