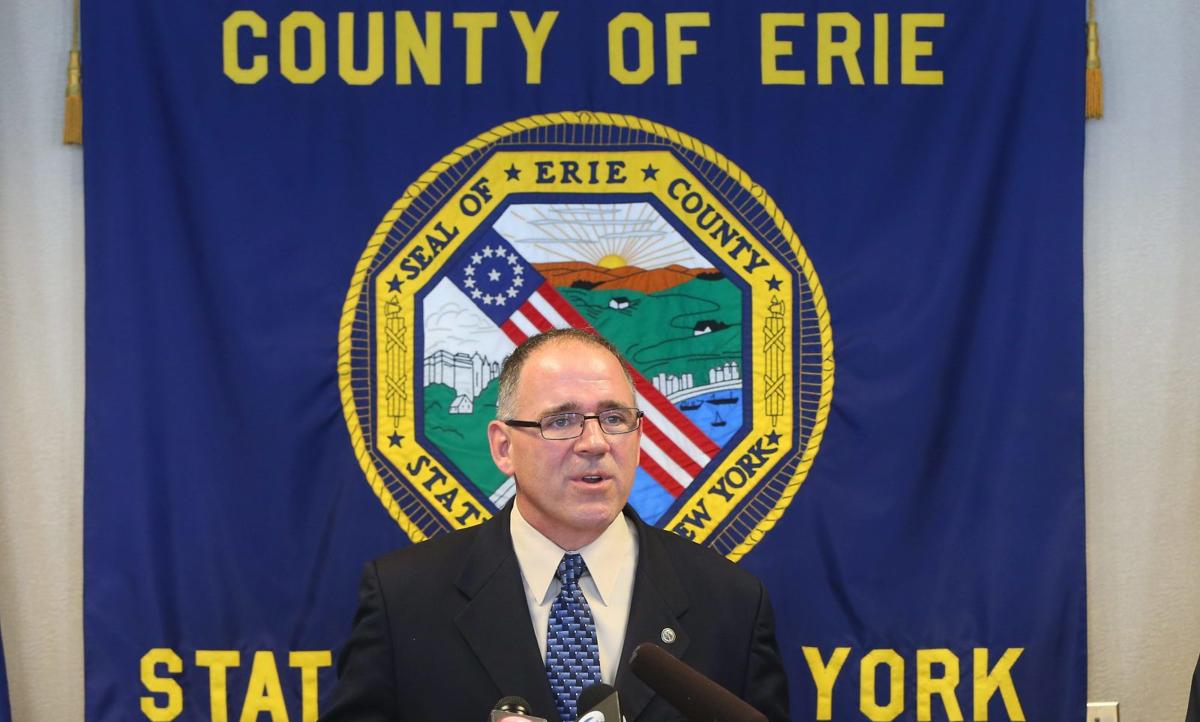 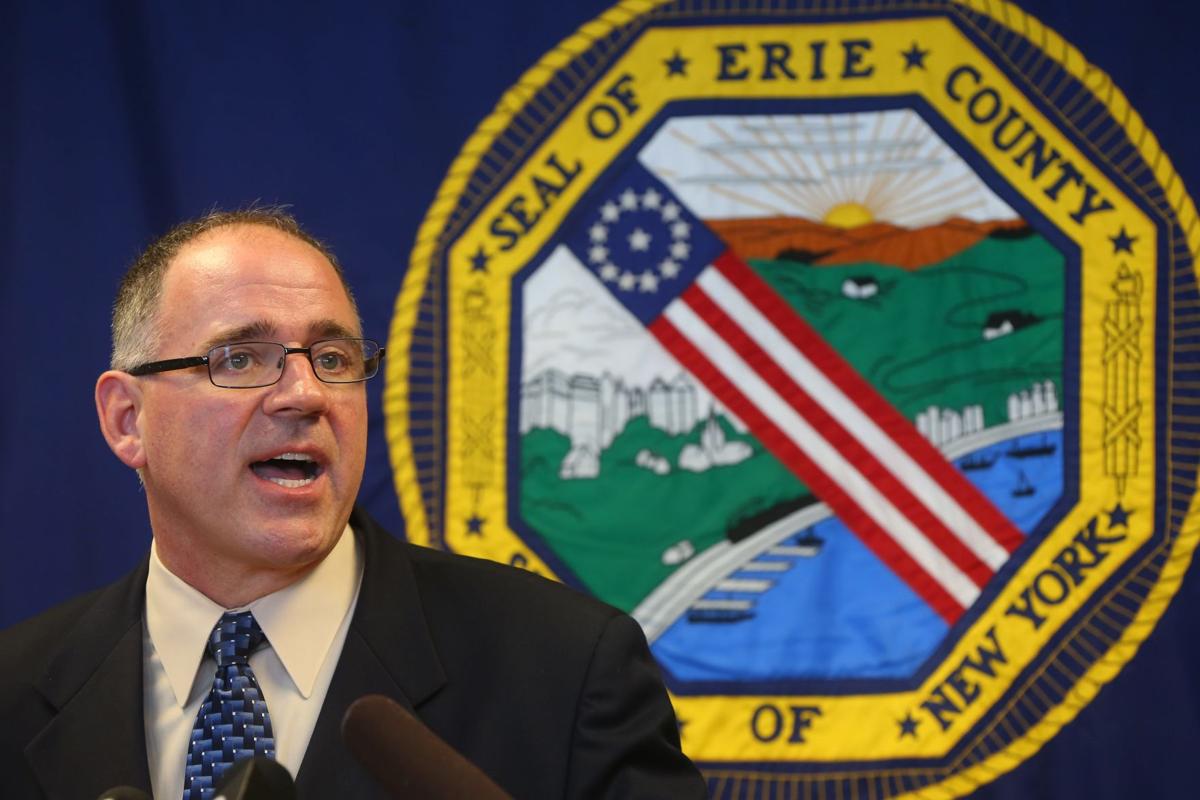 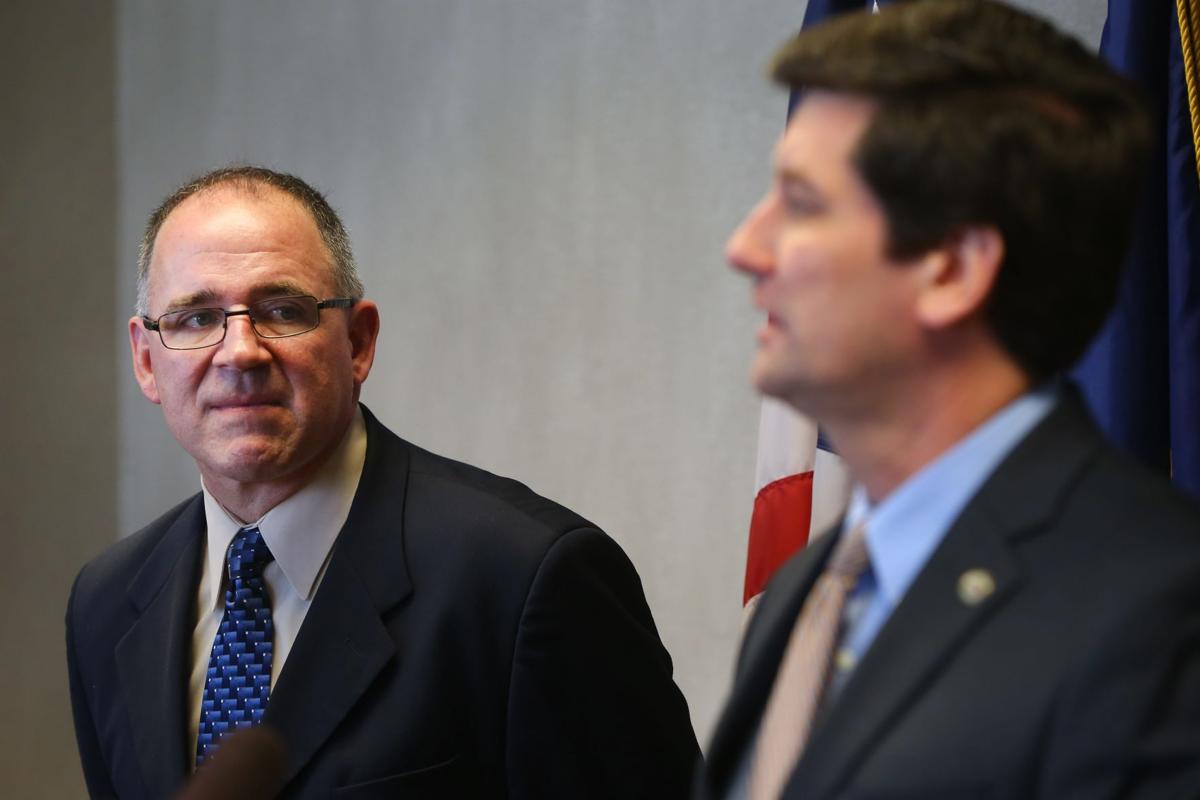 Al Dirschberger abruptly resigned Thursday as commissioner of Erie County Social Services at the request of the county executive after it was learned he was under criminal investigation for an incident that allegedly occurred in Albany earlier in December.

At a news conference Thursday evening, Erie County Executive Mark C. Poloncarz announced that he had requested Dirschberger's resignation earlier that day after concluding an internal investigation into the allegations. As of Thursday, there were no charges filed against Dirschberger, according to several sources.

Poloncarz said he was made aware on Saturday "of an alleged serious incident involving the commissioner and a subordinate employee in Albany, N.Y., during a conference on Dec. 5 or 6 of this year."

"I immediately engaged senior staff, including the county attorney and the personnel commissioner – who was and still is in the United Kingdom on vacation –  in reviewing the allegation and to examine relevant county personnel policies," said Poloncarz.

He also said that an Albany police detective returned his call later that day.

"The detective confirmed that no charges had been filed and would not confirm any potential charges that might be filed against him in the future," Poloncarz said.

A spokeswoman for the Albany County District Attorney's Office also said that an investigation involving Dirschberger is underway, and that there has been no arrest and no criminal charges have been filed at this time.

Poloncarz would not address the nature of the criminal investigation, only that it involved allegations of inappropriate behavior towards a subordinate female staff member. He also said he spoke to Dirshberger,who is off this week, by phone with other county officials earlier Thursday about the allegations.

"I asked him specific questions with regards to his conduct. Based on his responses I believe he violated multiple county policies and asked him to resign, which he did verbally over the phone," Poloncarz said. "At that point I asked for a written confirmation of his resignation via email, which he agreed to do."

"His resignation today is based on our internal investigation and Mr. Dirschberger's answers to my questions," Poloncarz said. "Regardless of whatever criminal investigation may be occurring, his conduct warranted removal from his post."

In explaining the resignation, Poloncarz said, "Due to the unique nature of the Social Services commissioner being appointed to a specific term, at not serving at my pleasure, I could not terminate him at will and, therefore, I requested his resignation, which he did provide."

He added, "I remain disappointed and angered about the alleged incident."

Top administrators in the Social Services Department were called into a staff meeting Thursday afternoon with Poloncarz to be informed that Dirschberger had resigned and that first deputy Commissioner Marie Cannon has been named acting commissioner.

A search for Dirschberger’s successor will begin in early 2018, the County Executive's Office said.

Other county leaders reacted to the development with surprise and with questions of their own.

"It sounds pretty serious when out of the clear blue sky he announces he is resigning," said Legislature Chairman John Mills, a Republican from Orchard Park, before the news came out of the criminal investigation.

Mills noted that Dirschberger was present at the Legislature's last caucus on last week. When a legislator asked Dirschberger why he had been absent from prior committee meetings, Dirschberger gave no clear answer, Mills said.

"His demeanor was different," Mills said.

Mills said Poloncarz called him Thursday to inform him about the resignation.

Outgoing Legislature Majority Leader Joseph Lorigo called the matter shocking. He said if the administration was aware of the criminal investigation prior to Thursday, he questions why Dirschberger was allowed to continue in his job until now.

"The fact that they were informed a criminal investigation was ongoing and still allowed the commissioner to remain employed and speak before the Legislature is concerning," he said.

Dirschberger headed Erie County's largest department, with a staff of roughly 1,600 employees and annual spending of about $600 million in local, state and federal money.

He was appointed in March 2015, taking over a department that had come under heavy criticism after the deaths of three children whose families had been investigated by Child Protective Services. The department continues to grapple with high staff turnover rates and a campaign by CPS workers for higher pay.

Among his initiatives, Dirschberger championed department-wide training that recognizes the impact of trauma exposure on both residents and staff, and he successfully pushed for better work space and extensive renovations to Social Services facilities, especially in areas that serve the public.

For one of the most gut-wrenching jobs, Erie County takes a new approach

Poloncarz nominated Dirschberger for commissioner of Social Services after he had served only two months as executive director of Journey's End Refugee Services. He earned his doctorate in social work from the University at Buffalo and previously worked for many years at the Gateway-Longview human services agency, which provides services to children with disabilities.

He was a tenured professor at Daemen College and Erie Community College. Poloncarz said at the time of the appointment that Dirschberger was chosen after a long search because "I wanted to be sure we had the right person for the job."

Dirschberger was unanimously confirmed by the Erie County Legislature, although Democratic legislators Betty Jean Grant and Barbara Miller-Williams heard from members of an advisory board that was connected with Gateway-Longview's Family Resource Center. They accused Gateway-Longview of discrimination against African-American employees, unfair firings and the squandering of program funds.

Dirschberger was a 27-year employee of Gateway-Longview who served as a vice president of the agency from 2002 until late last year.

Dirschberger said at the time that those the complaints stemmed from "a lot of misinformation" about the East Ferry Street facility, which Gateway-Longview purchased for $1 in 2007. He said he had no direct oversight of the facility beyond the first six months it was opened. He also said some resource center workers were fired because of child abuse complaints that outside agencies upheld, and only after Gateway-Longview also conducted its own investigations.

His nomination as commissioner came after former Commissioner Carol M. Dankert-Maurer stepped down after five years in the position.