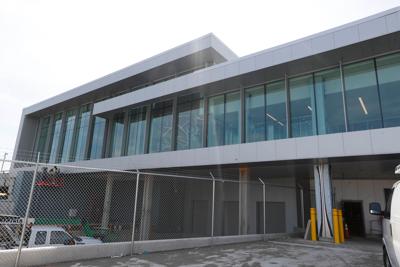 The newest phase of the Niagara Frontier Transportation Authority's $80 million expansion of Buffalo Niagara International Airport is nearing completion, and customers of the Cheektowaga facility are in for a whole new traveling experience.

A few days ago, a Buffalo News reporter and photographer got a sneak preview of the new additions to the east and west concourses, still dominated by workers and construction equipment. But when the new areas open in late June, travelers will mostly notice the eased flow of foot traffic stemming from new passageways for arrivals that will direct them around the facility's far east and west ends to state-of-the-art baggage carousels on the ground floor.

As a result, airport officials expect the congestion of both arriving and departing passengers on the upper level near the elevators to be a thing of the past.

Below are highlights of some of the key, new airport improvements.

William R. Vanecek, NFTA director of aviation, said those coming to the airport to pick up friends and family will no longer mill around the upper floor elevator area to greet arrivals. Instead, new escalators will whisk them up to an expansive "meet and greet" area on the east concourse with soft seating and even work stations for laptops.

"If you have to get here an hour ahead, you can plug in your computer so you don't have to just stand around," he said.

Passengers arriving on JetBlue, Southwest, Delta and United airlines will be greeted in the new area and proceed to baggage carousels below via new escalators.

Arrivals in the "meet and greet" area will notice the creative lighting pattern in the new east concourse that provides plenty of light for airport patrons picking up arriving passengers. Note the "living wall" in the background, chock full of real plants that airport planners say will offer a favorable first impression.

"We wanted to make it much more inviting to give a great first impression for those coming to Western New York as well as people coming home," Vanecek said.

Besides several amenities, the new space is lined by giant glass walls that provide a wide view of the airfield apron along the east concourse.

These state-of-the-art doorways will automatically open and close from secure areas of the east concourse into the new "meet and greet" area. The new system opens an initial set of doors for arriving passengers, which then close behind them to prevent unauthorized re-entry.

"They detect any backflow and then automatically shut and lock," Vanecek explained, eliminating the need for the lonely security guard who previously had to intercept any unauthorized entry.

A similar system has been installed for arrivals in the new west concourse – all designed to improve the internal flow of pedestrian traffic.

Construction equipment is poised for final touches at new arrival pickup area on the west concourse, where vehicles can pull up along the lower level. The new feature relieves some congestion in the main pickup area, and will serve passengers arriving on American and Frontier airlines as well as international flights.

Airport officials are enthusiastic about the new system that keeps arrivals sheltered from the elements and eliminates the previous need to walk outside.

"That was a miserable situation for folks trying to get to the parking lots through snow and mud and sleet," Vanecek said. "So we decided to cover it."

New escalators await arriving passengers aboard Frontier and American airlines, as well as international flights, on the new west concourse. The hickory ceilings are another attempt to create a favorable first impression for first-time visitors as well as those returning home.

Arrivals will find an inside area to await pickup by vehicles using the new approach immediately outside. Airport officials consider eliminating the need for west concourse passengers to slog through the elements en route to parking lots and instead enjoy interior shelter as one of the new facility's best improvements.

The need for travelers to meet ground transportation remains a critical aspect of modern airports, and planners feel they have upgraded the facility's waiting area.

A new space in the airport's east concourse will house passengers waiting to board buses and taxis ready to ferry them to final destinations.

"Buses and other rides will come up into an outdoor plaza," Vanecek said, "or they can wait inside."

The state-of-the-art equipment replaces the flat "belt" type of baggage retrieval system familiar to Buffalo travelers for many years, and now mirrors those operating in larger airports around the country. When the airport project is completed, four baggage carousels will replace the three older belt conveyors.

Airport officials believe the new $80 million expansion will improve the flow of pedestrian traffic throughout the new facility, including more direct passage to the baggage area with less congestion.

New conference rooms can be rented to travelers

Old administrative offices have been absorbed into new features of the expanded airport, replaced by new offices with new features. Several new conference rooms – which can be subdivided – have been added to the facility. Officials envision that large or small conference rooms can be rented for quick meetings to travelers flying in and out of Buffalo.

Airport staff has been directing the $80 million expansion project from the old offices, and now move into more state-of-the-art facilities. The staff not only directs day-to-day operations, but markets the airport to airlines around the nation and the world.

Travelers are beginning to return to air travel, prompting the TSA to remind air passengers that security measures will have a different – and enhanced – look and feel as they return. 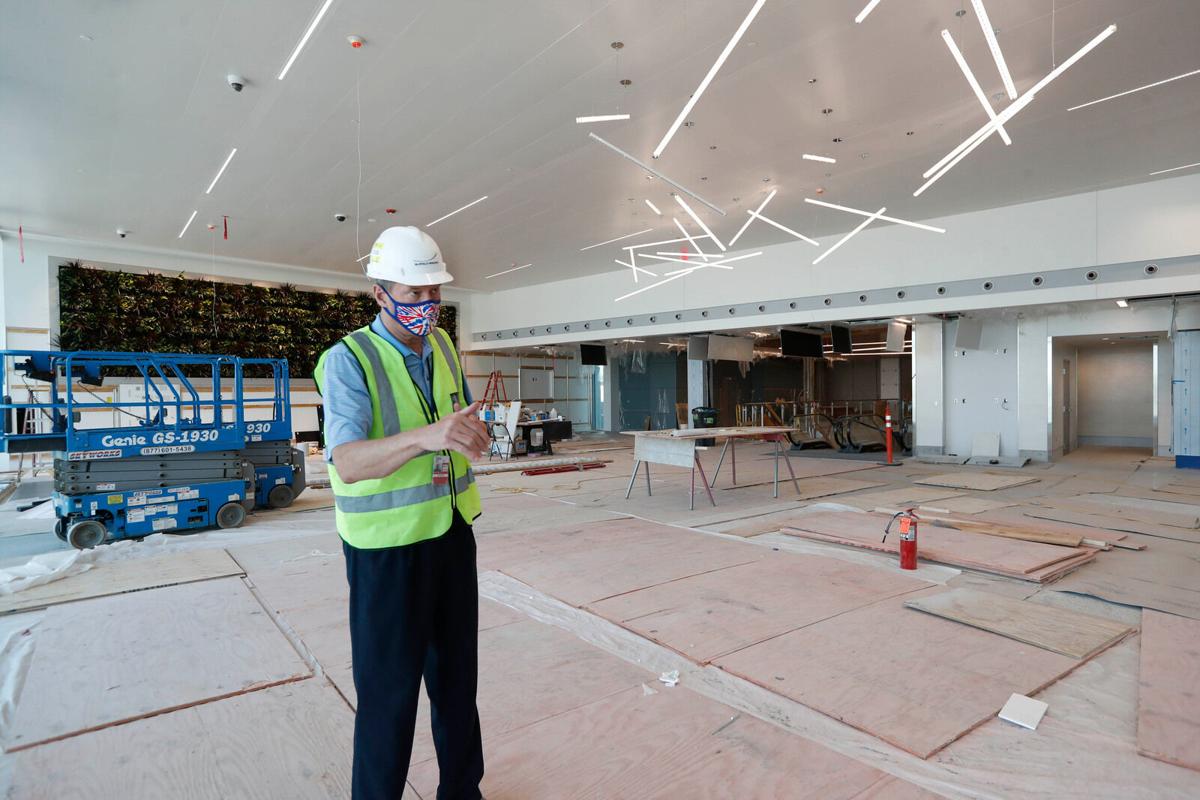 Aviation Director William R. Vanecek looks over prep work in a spacious new east concourse "meet and greet" area that will have soft seating and laptop work stations for those waiting to pick up passengers arriving on United, Southwest, Delta or Jet Blue airlines. 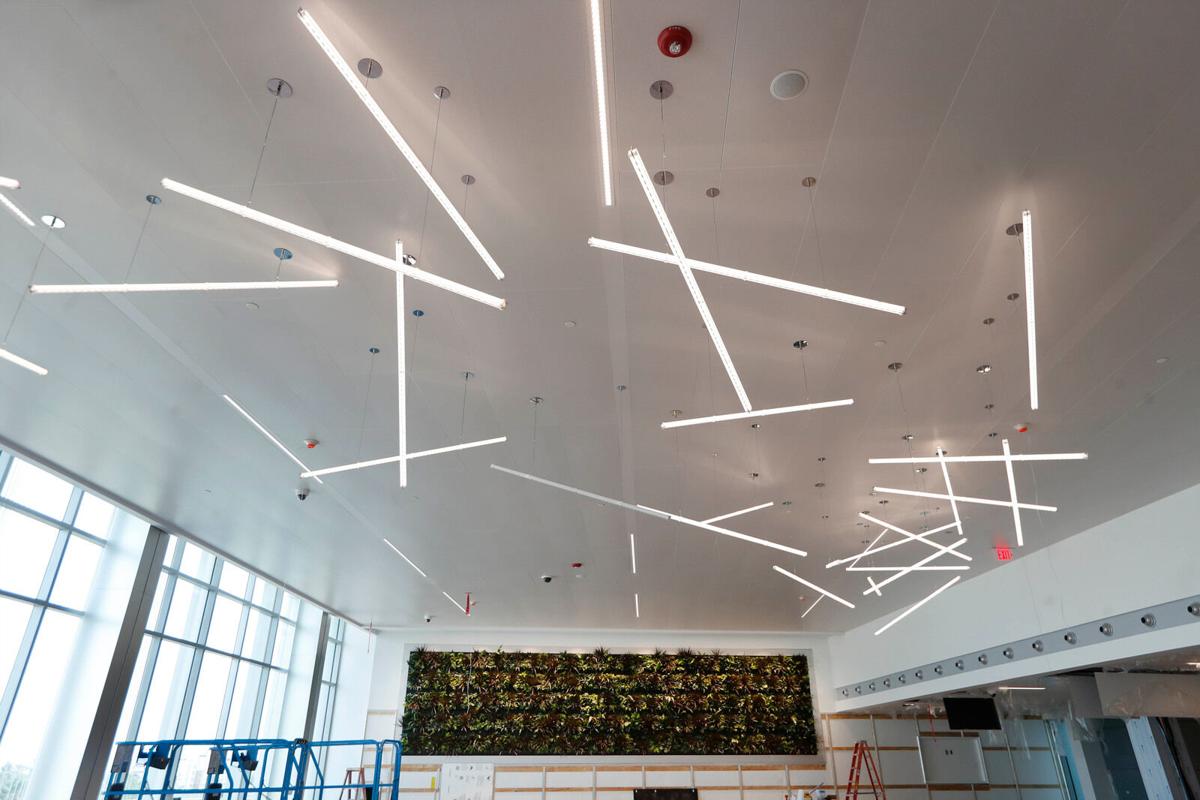 Creative lighting and a "living wall" featuring real plants will greet passengers arriving in the east concourse and create what airport officials hope will be a good first impression. 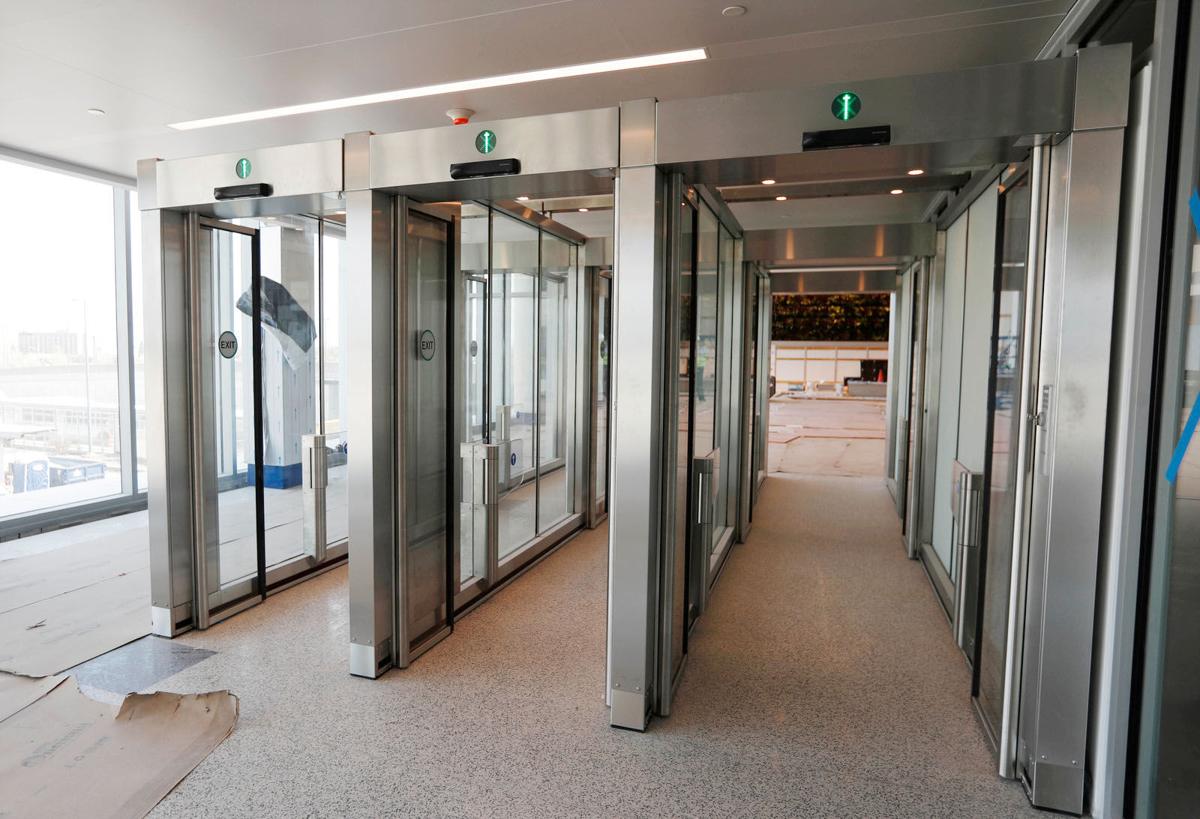 Self-locking security doors will allow arriving passengers to exit into the "meet and greet" area but automatically close to prevent anyone from going in the other direction. 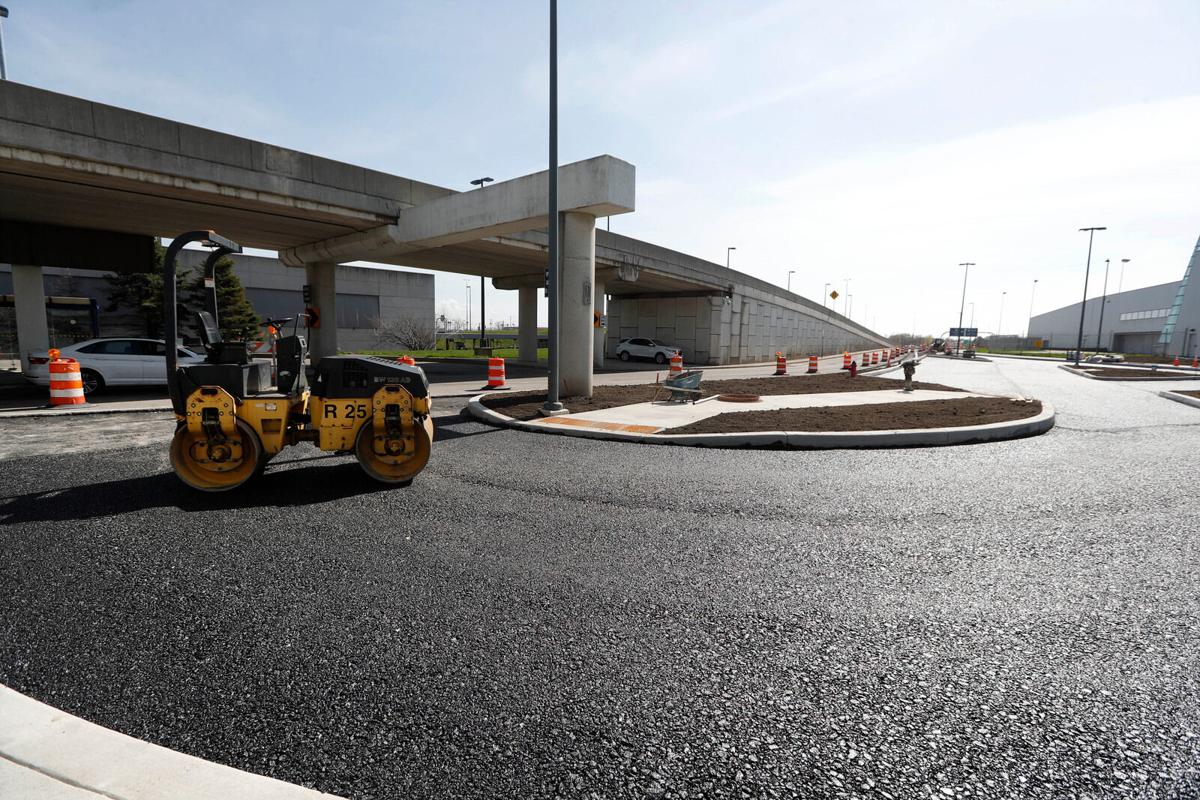 A new covered pickup area on the west concourse will provide protection from the weather for passengers arriving on American, Frontier and international flights. 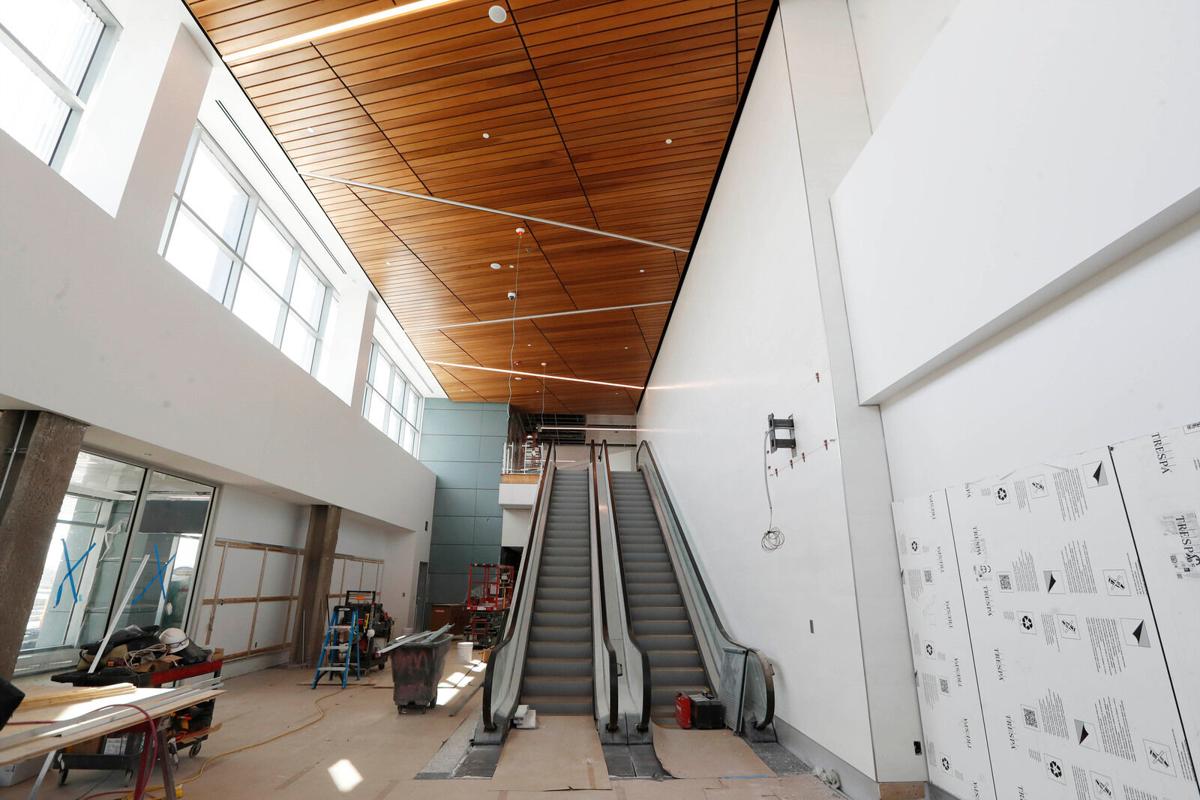 Hickory ceilings above new escalators ferrying arriving passengers in the west concourse are another effort to create a favorable first impression. 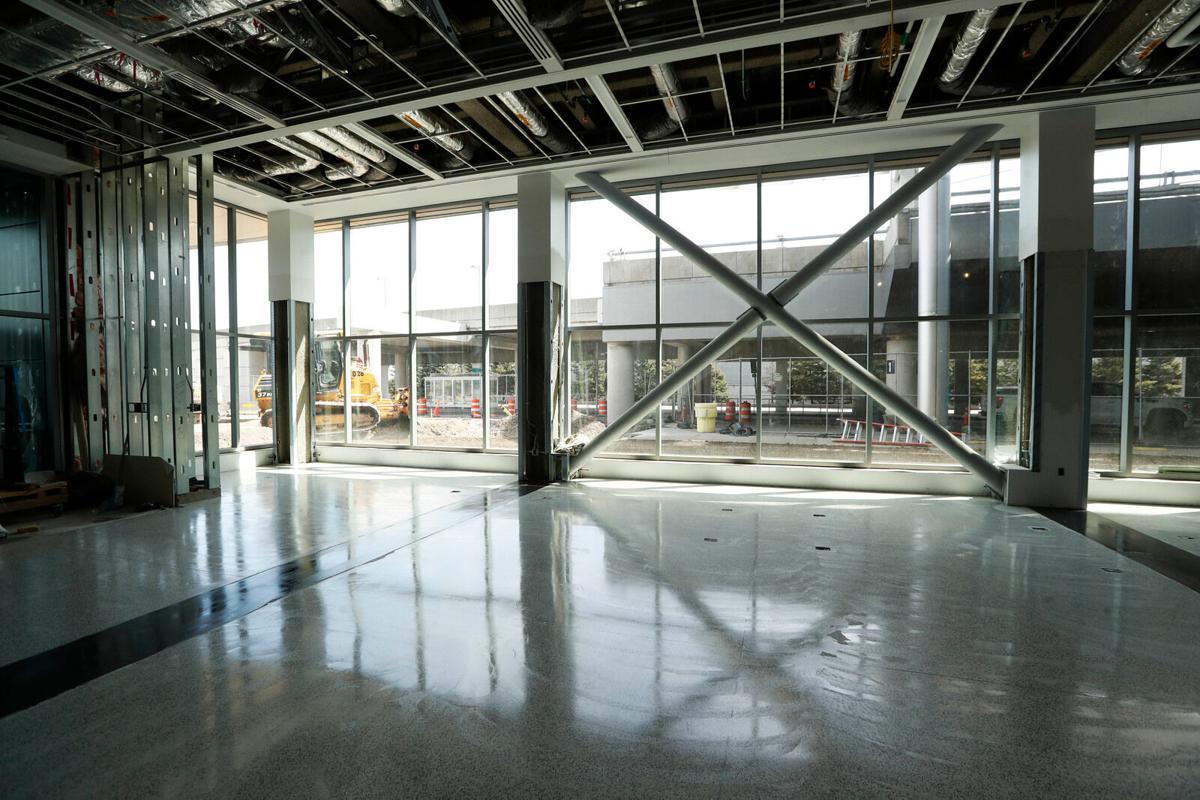 Passengers looking for taxis or buses to get to their final destinations will be able to wait in a new inside area in the airport's east concourse. 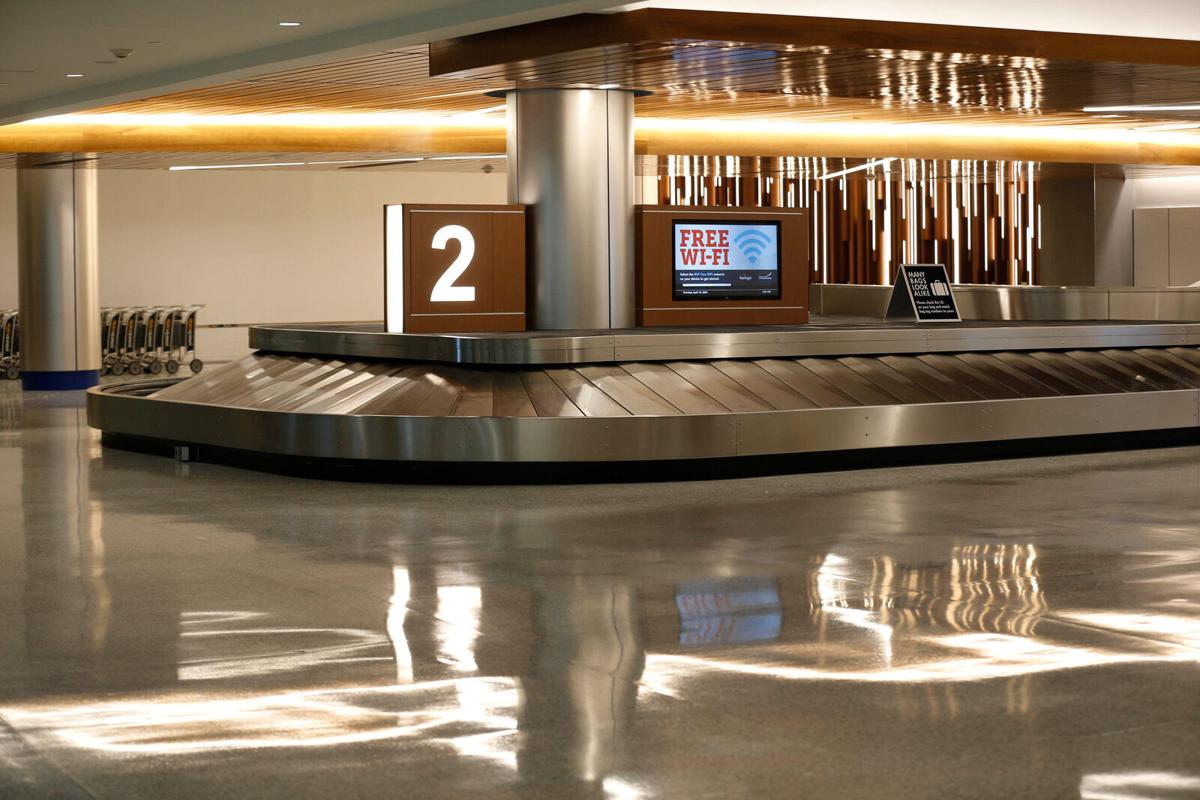 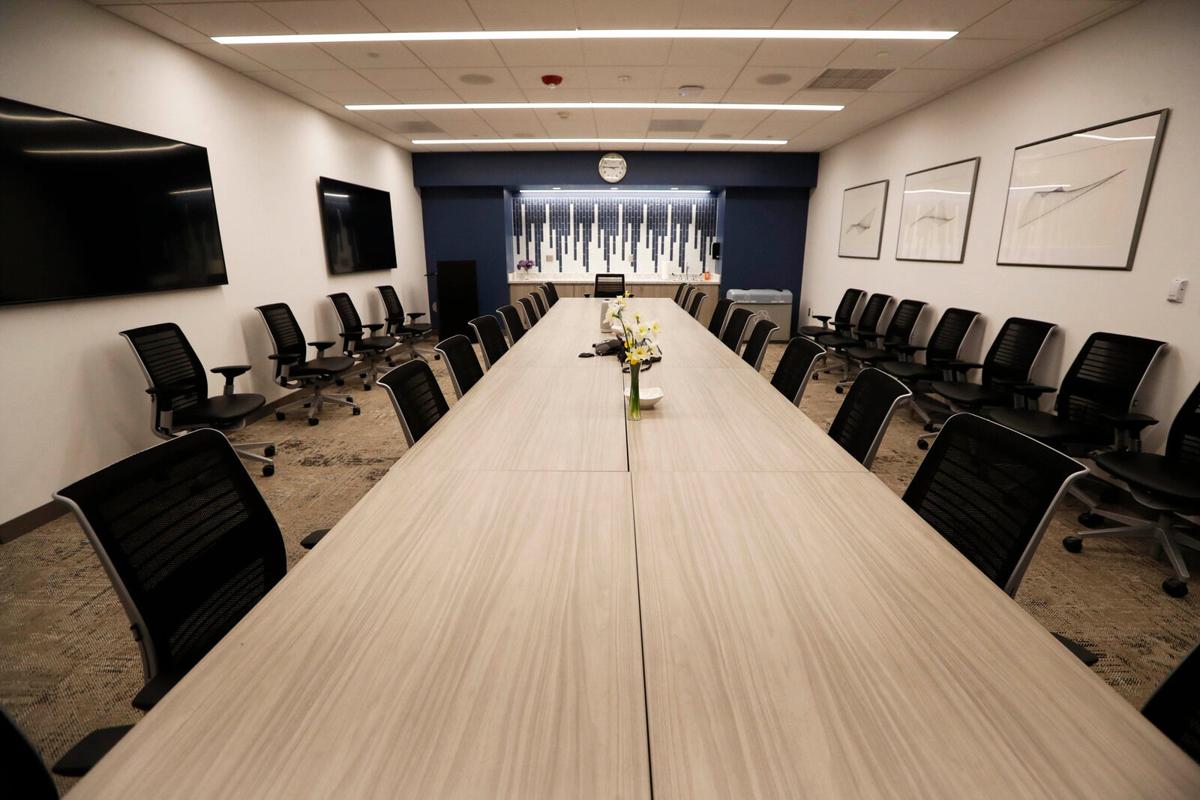 This is the larger of two new airport conference rooms that can be rented to travelers for quick meetings when flying in or out of Buffalo. The room also can be divided into smaller spaces.