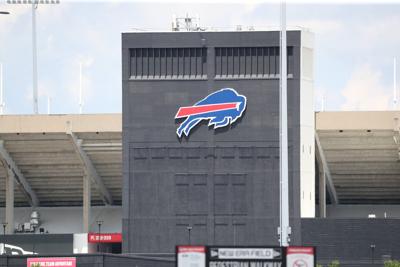 Larry Quinn has built a pro sports venue, helped save a franchise, worked in economic development and served as an elected official. Those roles give him a unique vantage point into discourse over the Buffalo Bills’ stadium lease situation, and he thinks this:

That was Quinn’s response to the question of whether New York State and Erie County should help team owners Terry and Kim Pegula construct the $1.4 billion stadium project they are seeking as the team’s lease on Highmark Stadium expires in 2023.

“The National Football League is a media empire – the most pervasive, fastest-growing media entity there is,” said Quinn, who ran economic development for the City of Buffalo in the late 1970s, oversaw construction of the arena we today know as KeyBank Center in the 1990s for the Buffalo Sabres, and later became managing partner of the hockey team under billionaire Tom Golisano, who purchased the franchise out of bankruptcy in 2003.

Quinn’s direct work in pro sports concluded in 2011, when Golisano sold the Sabres to the Pegulas, who purchased the Bills three years later. Since then, Quinn served as a member of the Buffalo Board of Education from 2014 to 2019, and has remained involved in development.

“If our community wants to be part of the NFL, the facility our community owns has to keep pace with all that growth, whoever the owner of the Bills happens to be,” Quinn, who is not involved in the lease negotiations, told The News in a series of interviews. This is a condensed version of those conversations:

The Pegulas are looking for a “public-private partnership” to build a new stadium. It’s likely that most of the $1.4 billion they’re seeking will be public money. Are you in support of that?

Quinn: Ultimately, there will be money from the NFL and money from the Pegulas in a deal. But if you’re struggling with the state making a contribution of, say, $1 billion, it’s really not that much when you put it into context of other things. The School Board in Buffalo gets $1 billion a year from the state. Not just once, but every year, and the amount of scrutiny into that isn’t anywhere near the scrutiny that goes into this, which is a one-time shot. I’m in favor of helping the Pegulas on this and doing it in the right way – and not letting it hang around forever. Just do it. I really think this is the time.

What makes the timing work?

Quinn: The Pegulas are trying to create urgency so people focus on it. They should be doing that. This is the most critical time to do it, and it’s the most opportune time.

Interest rates are low. The city, state and county are flush with capital dollars to handle all their other projects. The Biden infrastructure money is going to take care of a lot of things that would normally come out of the capital budgets of those governments. You don’t have the pressure of building a stadium, but not building roads or hospitals.

What’s your preference between a dome and open air?

Quinn: I think a retractable dome is a smart thing to do. It extends the useful life of the building and creates more opportunities for you than just NFL football. You could have concerts year-round, a major political convention. You could open the opportunity for a bowl game, an NCAA basketball final. In theory, you could make it possible for a Super Bowl. There are all kinds of opportunities if we approach it the right way, and if you think about all those opportunities, why should Terry Pegula pay for those? But I do expect they’ll play a role.

Much of the rhetoric against publicly funding a stadium – even in part – is that doing so is like giving a gift to billionaires.

Quinn: It’s not for the Pegulas. They happen to be the owner now; maybe they won’t be the owner 10 years from now. I can't predict whether somebody would move them or not, but I think you really want to look at this as a way of ensuring the Bills being here.

To me, it’s really making sure you have an NFL stadium that allows you to play in that game. They need to have a modern facility to keep pace with a league that is the biggest in the world. It’s really that simple. You have to ask yourself, “Is it worth it to have an NFL team?”

Is it worth it?

Quinn: I’ve been thinking a lot about that, and I think it is. It has nothing to do with Terry or Kim or anybody else. When you look at the fabric of a city – what creates an identity for it and what holds it together – it’s things like this. The Bills give us a sense of community like nothing else does. It’s not only national, but international, and I think it has real value. If you don’t do a facility like this, you’re not going to be in that game.

Look at the direct revenue benefits to the State of New York: sales tax, people coming in and buying hotel rooms, eating in restaurants, buying food at the stadium, paying for parking – all of that – and then the income tax that the players have to pay.

The last billionaire who owned the Bills (founder Ralph Wilson Jr.) sold it and gave a billion dollars in charity to both Detroit and Buffalo (via the Ralph C. Wilson Jr. Foundation). Look at the amount of money that Terry Pegula’s purchase generates for Buffalo every year in charitable grants. You have to look at the long term.

What’s your level of concern over relocation?

Quinn: I don't have much concern about it. I don't believe the Bills or the NFL wants to move the team. But every business always has to remain current with its competition. If a television station doesn't go digital, they go out of business, right? Or if a bank doesn't develop a robust internet banking service, they lose business. The team has to remain at pace with what the NFL is becoming, which is an international juggernaut. If you aren't keeping pace with that, it's like any other business. You eventually die out.

You’re making a strong case for the value of the NFL. For comparison’s sake, I want to ask you about the National Hockey League. When the Sabres were in bankruptcy you played a key role in helping Tom Golisano buy the team in 2003 and keep the franchise in Buffalo. How do you compare the notion of losing the Bills with that very real prospect 18 years ago of losing the Sabres?

Quinn: As much as I hate to say it, it would be a much greater blow if we lost the football team. The NFL is an international phenomenon. It’s massive. The Bills may very well be in the Super Bowl, and every year it’s becoming bigger. Buffalo without the Bills is like Paris without the Eiffel Tower.

Watch now: U.S. to require foreigners entering by land to be fully vaccinated

The Editorial Board: As talks start toward new Bills stadium, some public financing is inevitable

"If Western New York wants to keep the Buffalo Bills – and it should – a new stadium is a necessity," writes The News' Editorial Board.

The Bills have until 4 p.m. Tuesday to trim their roster from its current 81 players. Here are a couple of things to keep in mind heading into final cuts.

Pam Domineske is battling stage 4 breast cancer, which has spread to her lung, liver and bones, her granddaughter said.

An analysis of available financial information found the public paid an average of 50% of the cost of constructing the 21 most recent new NFL stadiums, with the team covering the rest.

Pay to play: How 21 NFL stadiums have been financed

Most stadiums were built with a mix of private and public funds.

Why a downtown stadium is not a hot Buffalo mayoral issue (Hint: the price tag)

As a healthy debate wages over City of Buffalo and Orchard Park as locations for a new Buffalo Bills stadium, the candidates for mayor appear to be on the outside looking in.

"I think about this constantly. I've talked to people behind the scenes just to gather information. But we'll make the right decision for the people of Western New York," Hochul said.

How do Buffalo Niagara's small-market realities impact negotiations over the Bills stadium?

Economic efficiency is likely to be a theme no matter what happens with a new facility, even as the Hochul administration keeps open the possibility of a downtown location or the option of a renovated Highmark Stadium.

That timeline – a year earlier than previously projected – is possible should the Buffalo Bills and New York State quickly reach an agreement for the construction of a proposed $1.4 billion venue in Orchard Park.