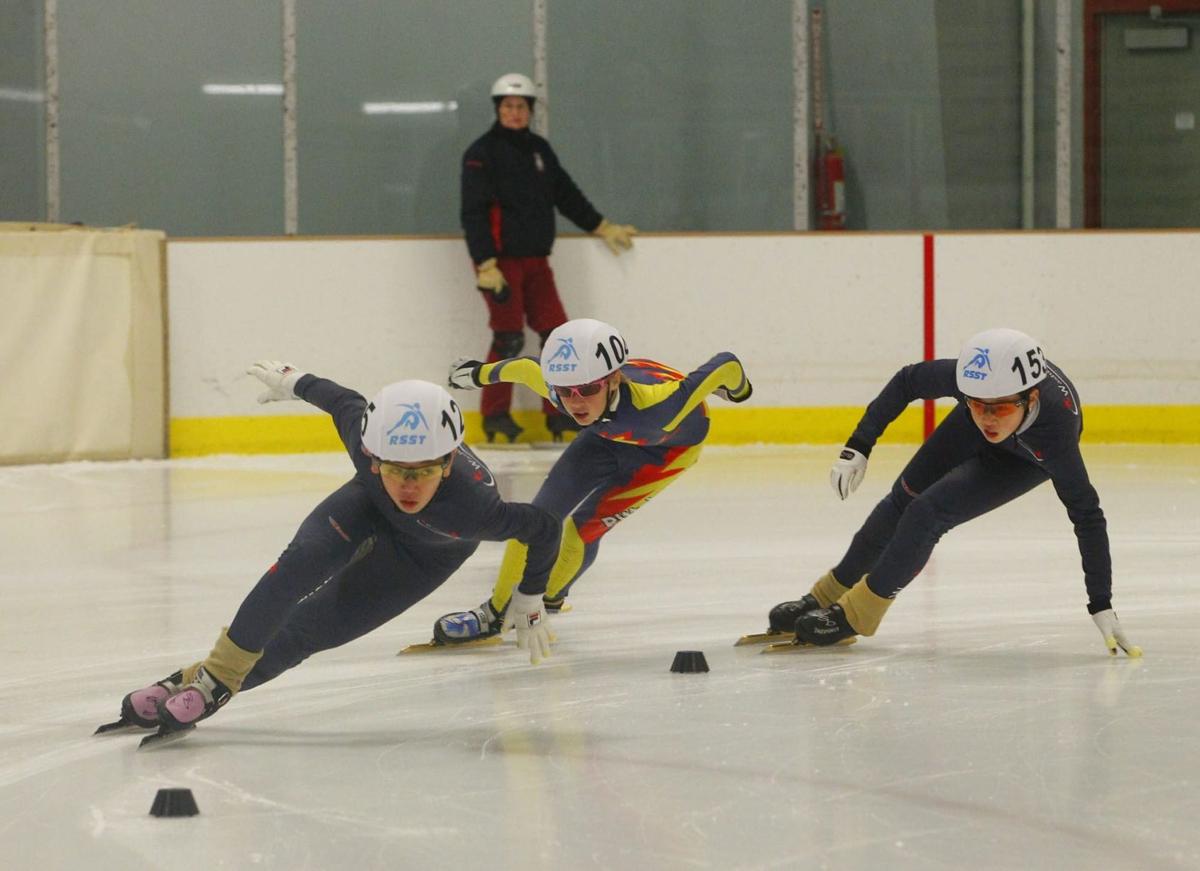 Brandon Kim (125) was the winner in the midget Boys 1000-meter final A during Sunday’s short-track speedskating event held at the Northtown Center in Amherst. 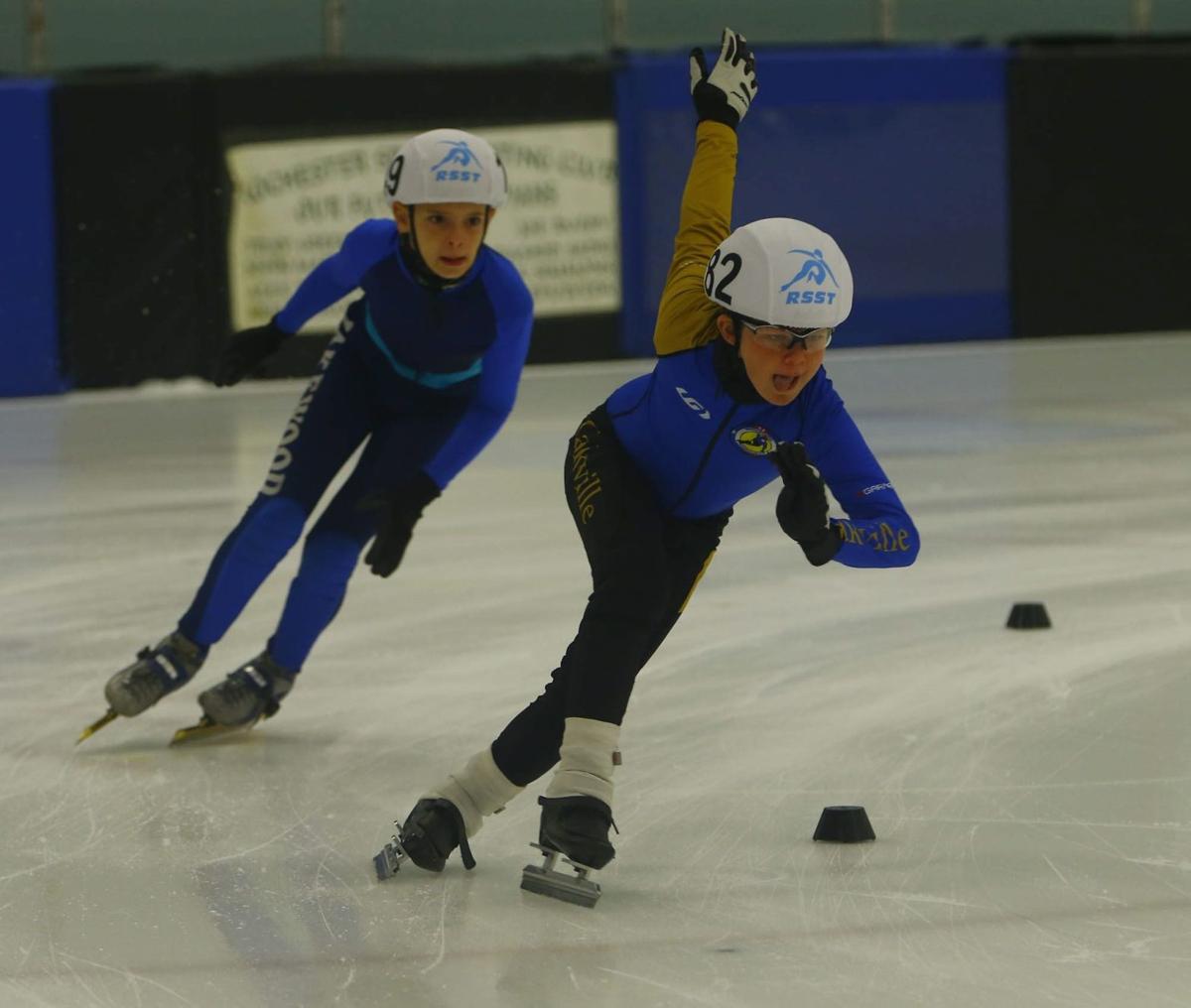 Short-track speedskating, a television favorite during the Winter Olympics, made its return to local ice this weekend – minus some of the mayhem that made it must-see TV during the Olympics.

The Buffalo Speedskating Club welcomed 116 skaters from as far away as Virginia for the two-day short-track meet as the Northtown Center in Amherst hosted the area’s first officially sanctioned speedskating event since 1961. The skaters ranged in age from 6 to over 75.

John Rooney, 13, of Buffalo, took up the sport last year.

“I used to play hockey and I was never considered ‘the fast one,’ so this is a bit different, and I like it,” he said.

He admitted there are crashes, “but it’s not as bad as you see on TV. They fall and they hit the boards, but they usually don’t get that badly hurt.”

His sister Katie Rooney, 8, came in fourth in her competitive debut. She likes speedskating “because you don’t have to skate in figure-8s and stuff.”

The “super-final” for the novice 7- and 8-year-olds Sunday morning saw five skaters head to the starting line, with boys and girls racing together in the younger age groups.

Moments after the gun sounded for the three-lap race, two of the racers, including 8-year-old Gabe Hasselback of Hamburg, had pulled over from the other three, who remained upright but seemed to have trouble handling the long blades speedskaters use.

Gabe, who put on speed skates for the first time three weeks ago, had the lead for a moment, but fell behind rounding the turn at the scoreboard end of the arena and was unable to catch up before the finish line. His mother, Natalie Hasselback, was pleased with his second-place finish.

“It was really new for him to put the speed skates on, which are different from your regular skates. It’s a different feeling, but he had that very quick,” said Natalie, a former figure skater who just started speedskating herself a couple of weeks ago.

Gabe won an earlier heat, but admitted there’s room for improvement. “I fell down a couple of times (Saturday),” Gabe said.

Another 8-year-old, Charlie Putnam of Buffalo, came in third. He was steered to speedskating by his mother, Carol Putnam, after she saw his style at recreational skating.

“He would only skate low and just fast,” she said.

Meet director Kathleen Heyworth said the Western New York Short-Track Speedskating Meet will be an annual event from now on. Local skaters have been competing in Rochester for the past several years, and another meet will be held there Dec. 6, but from now on, Amherst will be a regular stop on the skating calendar.

“This is a U.S. Speedskating sanctioned meet. Elite skaters can use these points toward their ultimate placement with U.S. Speedskating for the year,” Heyworth said. “They could qualify for higher-level meets.”

The Olympic exploits of Apolo Anton Ohno helped make short-track a viewer favorite, but skaters have been going around in circles on hockey rinks for years.

Short-track is contested on an 111-meter oval laid out on a hockey rink, while long-track uses a 400-meter oval similar to an outdoor running track.

Also, the long track has two lanes, one skater per lane. In short track, there are no lanes and numerous skaters are on the ice simultaneously, which can lead to crashes and wipe-outs. For that reason, short-trackers – who are protected by helmets and knee pads – prefer to use Olympic-sized hockey rinks, which are wider than the North American version.

“The larger the rink, the safer it is,” said Alan Jay, secretary of the Buffalo Speedskating Club.

The end boards in the Northtown Center still were mounted with padding, and an emergency medical technician was on hand at all times.

“Speedskating has always been a part of Buffalo,” said Craig Pielechowski of Holland, one of the area’s top coaches. “The club has been kind of simmering for a while, but we’ve rekindled it, and it’s growing very well now.”

Pielechowski, 71, is one of the best skaters in his age group. He also coached about 40 of the skaters who took part in the meet.

“I’ve taken two national championships, two North American championships and one world competition. I’ve got four world records,” Pielechowski said. He set those marks for his age group two years ago in the 500-, 777-, 1,000- and 1,500-meter races.

He said the publicity Ohno received has helped bring more skaters in.

The Buffalo Speedskating Club offers 50-minute practice sessions at 4 p.m. Sundays at the Cazenovia Park rink and at 7 p.m. Wednesdays at the Bud Bakewell Riverside Rink in Buffalo.

The price is $40 for three sessions, including the use of skates and coaching.

“Many people for the first year use our club rental skates,” Jay said. “We provide all the equipment for people to learn.”

More information is available at www.buffalospeedskating.org.

Brandon Kim (125) was the winner in the midget Boys 1000-meter final A during Sunday’s short-track speedskating event held at the Northtown Center in Amherst.