At the same time, a contractor who has examined the Great Northern said in an affidavit to State Supreme Court that the north wall damaged in a Dec. 11 windstorm "is totally independent from the rest of the structure" and "does not compromise the remainder of the Great Northern Elevator."

Decision on Great Northern grain elevator on hold until Monday

And a structural engineer working with developer Douglas Jemal submitted a statement to the court expressing certainty that the Great Northern can be preserved.

Both were in support of a lawsuit filed by the Campaign for Greater Buffalo History, Architecture & Culture calling on the Brown administration to revoke the emergency demolition, with arguments in State Supreme Court to resume Monday.

"I looked at that building very closely, and that building absolutely could be saved," Jemal told The Buffalo News. "It's a magnificent building. I have tackled a hundred times worse than that.

In a letter Friday to James Comerford, commissioner of Permit and Inspection Services, Ryan cited Jemal's contention that the locally landmarked 1897 structure can be restored and his willingness to buy the property. He said there should be an immediate independent feasibility assessment of the hulking brick box structure, the last of its kind in North America.

"Given the current circumstances, it would be unconscionable for the demolition to go forward," Ryan said. "The structure can be repaired and rehabilitated, but in order to get there, we need the City of Buffalo to step up."

Brown urges ADM to save damaged grain elevator; preservation attorney says city can still do that

The mayor's request comes days after his administration ordered an emergency demolition of the windstorm-damaged structure.

Comerford ordered an emergency demolition after it was sought by Archer Daniels Midland. The company filed an engineering report highlighting problems with the structure identified years before the December windstorm. Those problems have gone unrepaired. ADM, which requested emergency demolitions prior to this month in 1996, 2003 and 2020, was never told by the city to correct those problems.

Ryan said tearing down the Great Northern would not only be a historic loss, but would also reward ADM's behavior. Instead, he said, the city should compel the company to make repairs through its new receivership program piloted by Preservation Buffalo Niagara.

If ADM was unwilling to make repairs, the building should go to a receiver who would make the repairs, stabilize the building and then find an interested buyer, Ryan said.

The demolition order comes as Bakery, Confectionery, Tobacco Workers and Grain Millers Local 36G said it wanted to explore the feasibility of reusing the structure as a union hall, credit union office and public museum.

"Our city loves to celebrate the success of preservation, but those successes require action," Ryan said. "We can save this building. We just need the City of Buffalo to act."

That view was echoed by Fillmore Council Member Mitchell Nowakowski.

"ADM has proven to be an irresponsible owner," Nowakowski said. "They have had years to rehabilitate this building and have done nothing.

"With an independent assessment and our receivership program, we can finally get this building into responsible hands and preserve this unique part of Buffalo's history. The demolition permit should be rescinded to in order to make this happen."

Archer Daniels Midland, in a statement, said the large hole in the flat brick northern wall, exposing large steel bins, posed a safety hazard, including to workers in its flour mill next door.

Kenneth Keller, a contractor with a history of working on historic buildings, including projects with developer Rocco Termini, said the damaged north wall "can be easily isolated with fencing and other barriers to mitigate any danger to the public."

He reached his opinion after reviewing "extensive drone footage and photographs" of the grain elevator.

Keller also suggested wrapping the entire structure in "debris netting" commonly used in dense urban areas, including several glass-and-steel and masonry skyscrapers in Manhattan damaged in the Sept. 11 attacks. Cranes and boom trucks can reach the top of the Great Northern to install the netting, he said, as well as remove or reattach damaged metal panels the city has expressed concern about.

The City of Buffalo landmark was built in 1897 and operated for nearly a century. Saturday's windstorm tore a hole in the northern wall, but the grain elevator is not in danger of collapse.

Sanjay Khanna, a consulting structural engineer who works with Jemal, reviewed a number of issues identified by engineers working with ADM, but he said none weren't correctable.

"Our office has been involved with many projects involving historic structures in D.C. and other parts of the U.S., where similar repairs and restorations have been made," Khanna said. "There is no question in our mind that this building can be retained."

State Supreme Court Justice Emilio Colaiacovo wants a mediated settlement in the next week. But if the parties can't agree on one, the judge said he will quickly issue a decision.

The Editorial Board: City’s reversal on razing grain elevator opens a crucial question on its process

There’s no coming back after a historic structure is sent to the gallows.

One day after a State Supreme Court justice encouraged a settlement over the fate of the historic – but damaged – Great Northern grain elevator, none of the opposing sides budged from their positions.

"This hearing will be limited to the issue of how the city reached its decision and, specifically, whether the commissioner had a rational basis for issuing the order for the demolition," State Supreme Court Justice Emilio Colaiacovo said.

The Chicago-based commodities giant is seeking to demolish the local landmark for the fourth time since 1996.

A decision will come "quickly" on whether to grant a preliminary injunction to a preservation organization hoping to stop the demolition of the damaged Great Northern grain elevator, State Supreme Court Justice Emilio Colaiacovo said Monday.

In his ruling, Judge Emilio Colaiacovo found that James Comerford, the Buffalo commissioner of permit and inspection services, made a "rational" decision in ordering an emergency demolition after a Dec. 11 windstorm damaged the north wall.

Given the structure’s historic nature, the opinion of credible local developers that it can be saved and the desire of one of them to buy it, the city should revoke the permit and force Archer Daniels Midland either to perform the necessary repairs or transfer the building to a receiver.

The Campaign for Greater Buffalo said it sought the restraining order as a bridge to its expected appeal in appellate court next week that could come as early as Monday.

On Sunday, State Sen. Sean Ryan, Assemblyman Jonathan Rivera and Jessie Fisher of Preservation Buffalo Niagara again appealed to Archer Daniels Midland and the City of Buffalo to prevent the demolition of the giant brick structure.

"I want to save the Great Northern, and I won't let ADM bully this city around," Jemal said.

In his first public comments on the Great Northern since a Jan. 5 State Supreme Court ruling clearing the way for its demolition, Brown told The News the city's reason for not yet releasing an emergency demolition permit to ADM has been merely procedural. 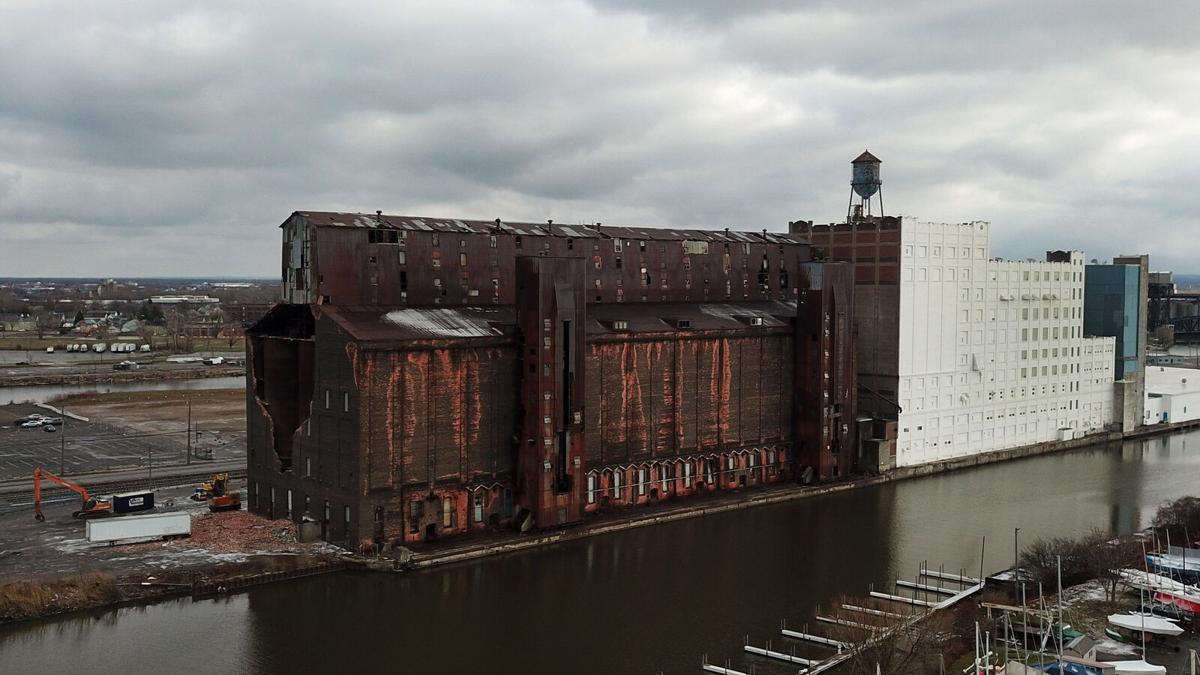 A lawsuit is seeking to stop the Brown administration from going forward with an emergency demolition of the 1897 Great Northern grain elevator at 250 Ganson St. This weekend, State Sen. Sean Ryan called on the mayor to rescind the demolition order. 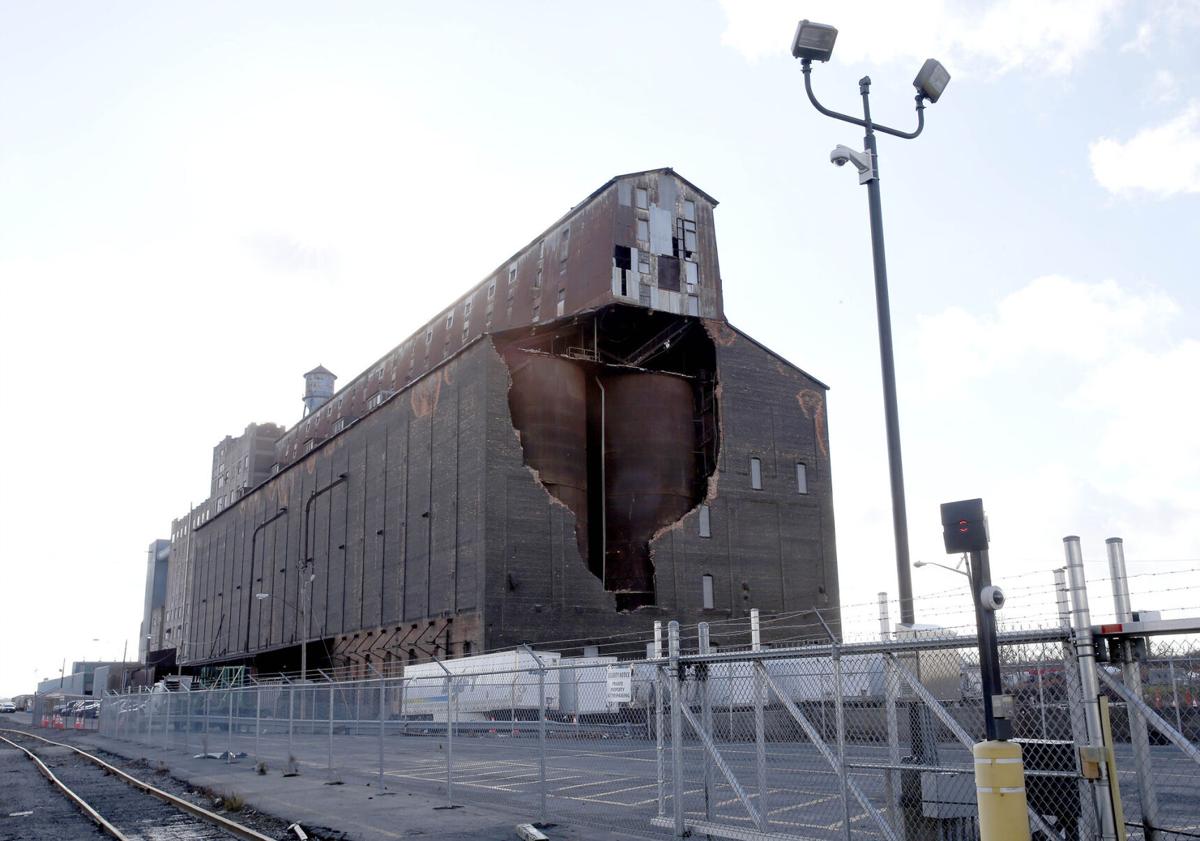 Wind caused damage to the north wall of the grain elevator, owned by ADM Milling Co., a division of commodities giant Archers Daniel Midland at 250 Ganson St., opened for business in 1897 and was last used in 1981. It sits next to a flour mill that was added later and is still in operation. Sunday, Dec. 12, 2021.