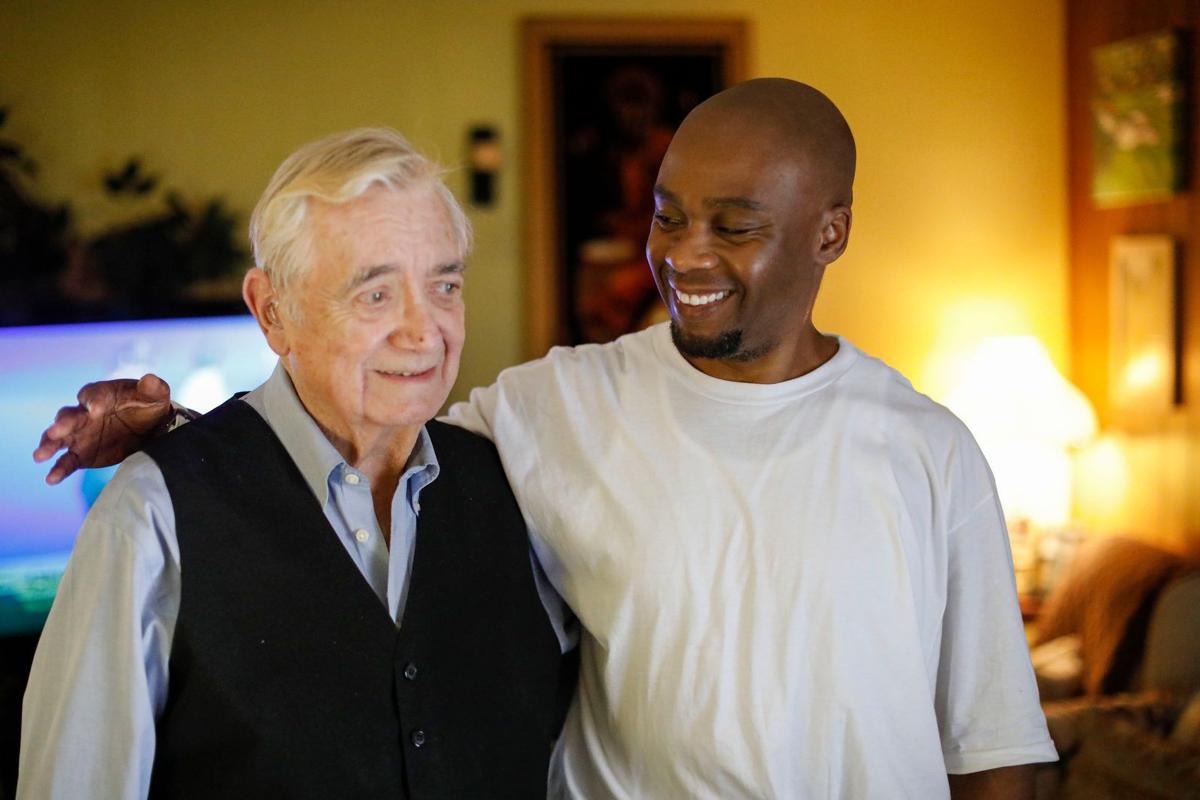 Valentino Dixon, right, who spent 27 years in prison for a murder he didn't commit, visits with private investigator W. Malcolm Plummer at the home of Dixon's mother in Buffalo after Dixon was finally exonerated and freed. (Derek Gee/Buffalo News) 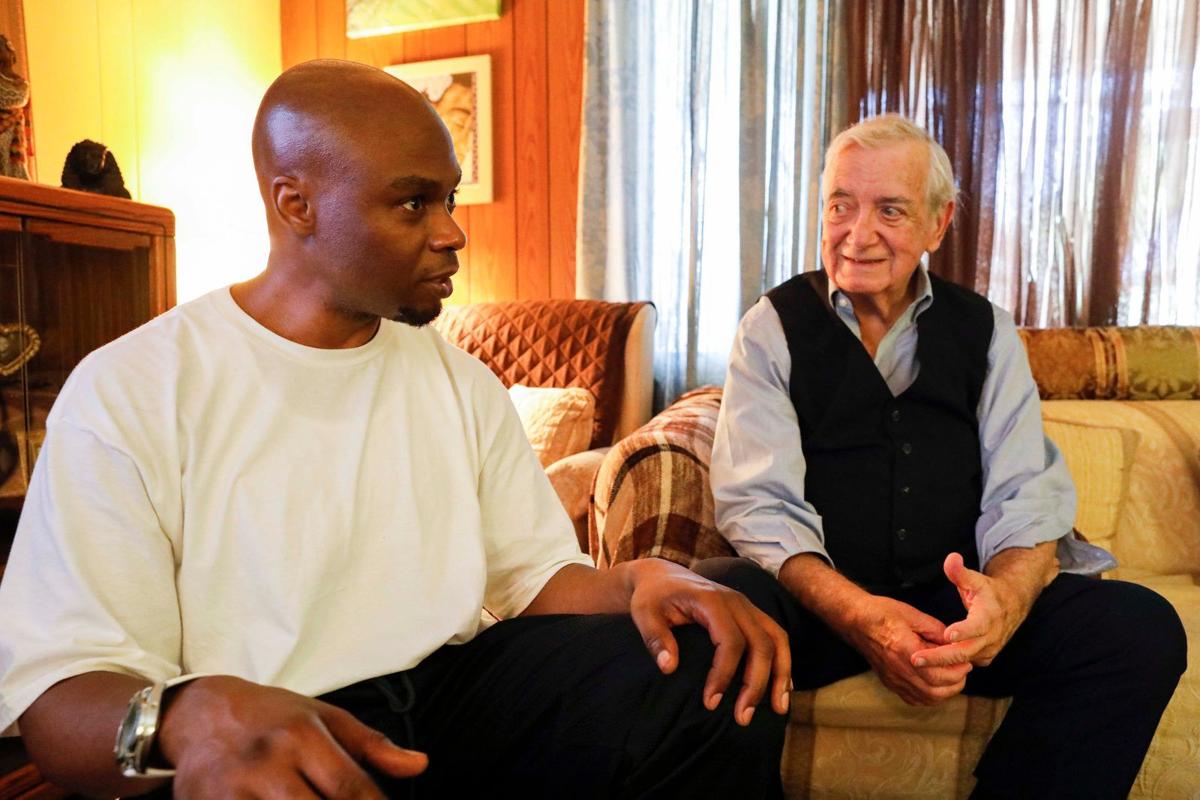 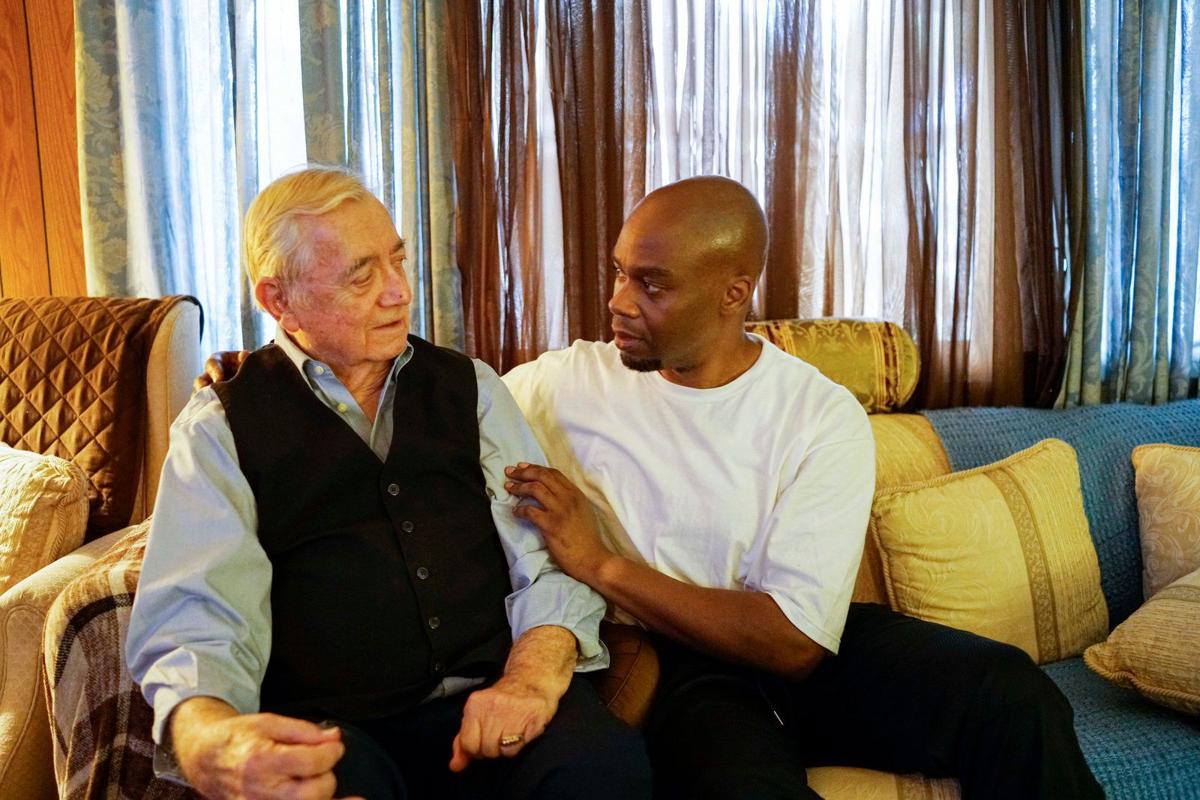 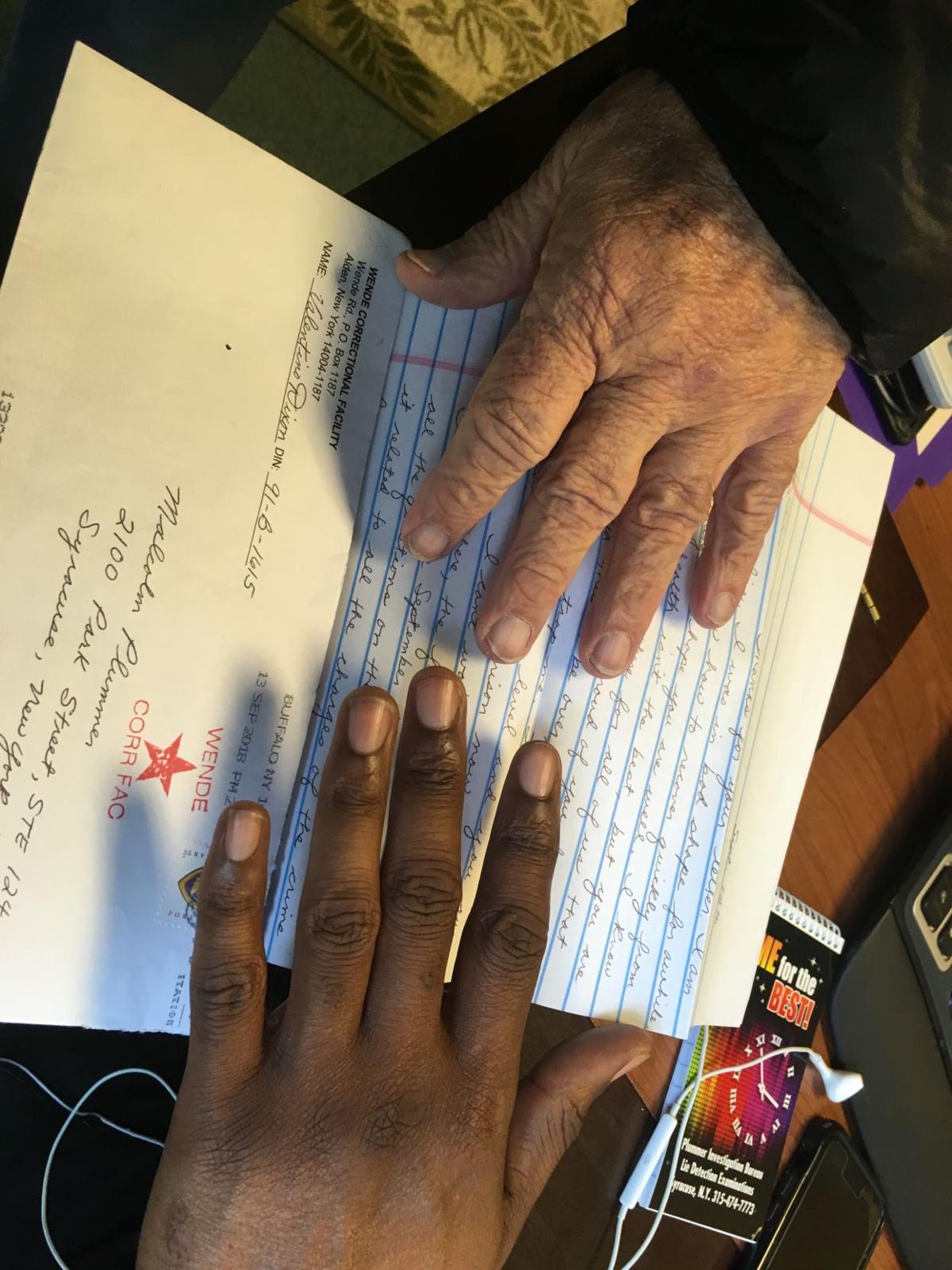 Valentino Dixon suddenly has a crazy schedule. After he was freed 17 days ago from the state prison system, he received a chauffeured ride to New York City, just before he appeared on the "Today Show."

He stays busy with his drawing. He holds long conversations with journalists. He is talking to agents about big plans for books and art projects.

Yet he set aside this weekend as a way of thanking “Pops.”

“He’d always tell me to hang in there, that I was going to get out,” said Dixon, released last month after 27 years in prison, most of it at Attica, when his convictions were vacated for  murder, attempted murder and assault.

“Pops” is what Dixon calls W. Malcolm Plummer, also known as "Mac," an 87-year-old private investigator from Syracuse. His daughter Roxanne, who assists him at P.I.B. Investigations, also provided major help on the Dixon case.

Thursday, she drove her father to Buffalo. They picked up Dixon at the East Side home of his mother, Barbara. He returned with them to spend a few days in Syracuse.

Dixon, 48, was keeping a promise. During his final years in prison, he worried that Plummer might not live to see him walk out as a free man.

"I know your health isn't the best," Dixon wrote, in a recent letter, "but you are hanging in there for all of us that love you."

Dixon looked forward to sitting with his friend during dialysis, a treatment Plummer receives for kidney disease. That can be a bleak and lonesome time, and Dixon has an understanding.

For almost a decade, Plummer stuck him with through Dixon’s long wait, at Attica.

“I spent so much time in prison,” Dixon said, “I thought I was born there.”

Before Thursday, they had met only once face-to-face, after Dixon’s family reached out to Plummer in 2010. He is skilled in administering voice stress analysis, a form of lie detection that he said is more accurate than traditional polygraph testing.

Plummer walked into Attica with no preconceptions about Dixon's guilt or innocence. Dixon, too, had no particular reason for trusting this white-haired detective from Syracuse.

“At first it was all business,” Dixon said.

Once he passed Plummer's test, he also shared his extensive records. Dixon said the documents offered proof that he did not kill 17-year-old Torriano Jackson in 1991.

Instead, Dixon said, the true murderer was Lamarr Scott, an inmate now in prison for another shooting. After making conflicting statements in the months after the shooting, Scott repeatedly said he killed the teenager during a confrontation at Bailey and East Delavan avenues.

Dixon's profile was also elevated by his unusual skills as an artist. His elaborate drawings of golf courses brought him to the attention of Golf Digest, a magazine that has championed his cause.

'It's the greatest feeling in the world,' says man exonerated in '91 killing

As for Dixon's path to freedom, Anthony Cardinale wrote a 2004 series for The Buffalo News laying out the disputed facts of his conviction. Fourteen years later, the forces aligned on his behalf included his Rochester lawyer, Don Thompson, and a conviction integrity unit established by John Flynn, Erie County district attorney.

Martin Tankleff, who had himself served 17 years for a murder he did not commit,  joined Marc Howard in working with a student team at Georgetown University that unearthed important information about Dixon's case, and just set up a new GoFundMe account on his behalf.

Amid his gratitude, Dixon reserves special affection for Plummer. Years ago, at moments when interest in the case seemed to wane, Plummer never stepped away. Dixon said Plummer served as both a mentor and "a second father."

"We love them," Barbara Dixon said. "They're like our own family."

Not only did Plummer refuse to accept payment, he would sometimes send Dixon small amounts of cash to use in the prison commissary. He also offered regular advice, based on his own long experience.

For Plummer, Dixon's freedom only reaffirms a lifetime of passion for his work. As a teenager in Syracuse in the 1940s, inspired by the work of detective writer Mickey Spillane, he dreamed of life as a private eye. His father was a barber at a New York Central railroad station. Plummer tried it for a while, but the job was not for him.

He served in the Navy, spent some time in factory work, then became a Pinkerton detective. In 1960, he started his own agency. The job took him to many prisons over the years, where he often heard the same expression that a guard said to him on the day he saw Dixon, at Attica:

“They all say they’re innocent.”

The difference, Plummer said, is that Dixon really was.

“I just thought it was an injustice,” Plummer said. “It’s bad enough just being there. But how does it feel if you’re in there lying on your cot, and you know you’re innocent, and you’re staring at the ceiling thinking no one’s going to listen, no one’s ever going to believe?”

After the Attica visit, Plummer and Roxanne both traveled to Buffalo’s East Side to speak with witnesses. The sustained commitment forged a deep connection.

“It makes a tremendous difference to have someone saying, ‘Keep going, I believe in you,’ when the rest of the world is saying shut up and stop your whining,” said Don Thompson, Dixon's lawyer.

In one of his last letters from prison, Dixon promised to visit Plummer, his wife Chere and Roxanne shortly after being released. This weekend, he kept his word.

Friday, despite Dixon's request to come along, Plummer went to dialysis alone, insisting the session would be too tedious. Dixon agreed, but he already had a plan. After his old friend was gone, Dixon found a ladder and a bucket of water and cleaned the front windows of Plummer's house.

“I consider President Obama and his wife two of the most influential Black Americans in the history of this country. She bought one of my drawings and he’s talking about me. I can’t tell you how much that means to me,” Valentino Dixon said.

Valentino Dixon, right, who spent 27 years in prison for a murder he didn't commit, visits with private investigator W. Malcolm Plummer at the home of Dixon's mother in Buffalo after Dixon was finally exonerated and freed. (Derek Gee/Buffalo News)