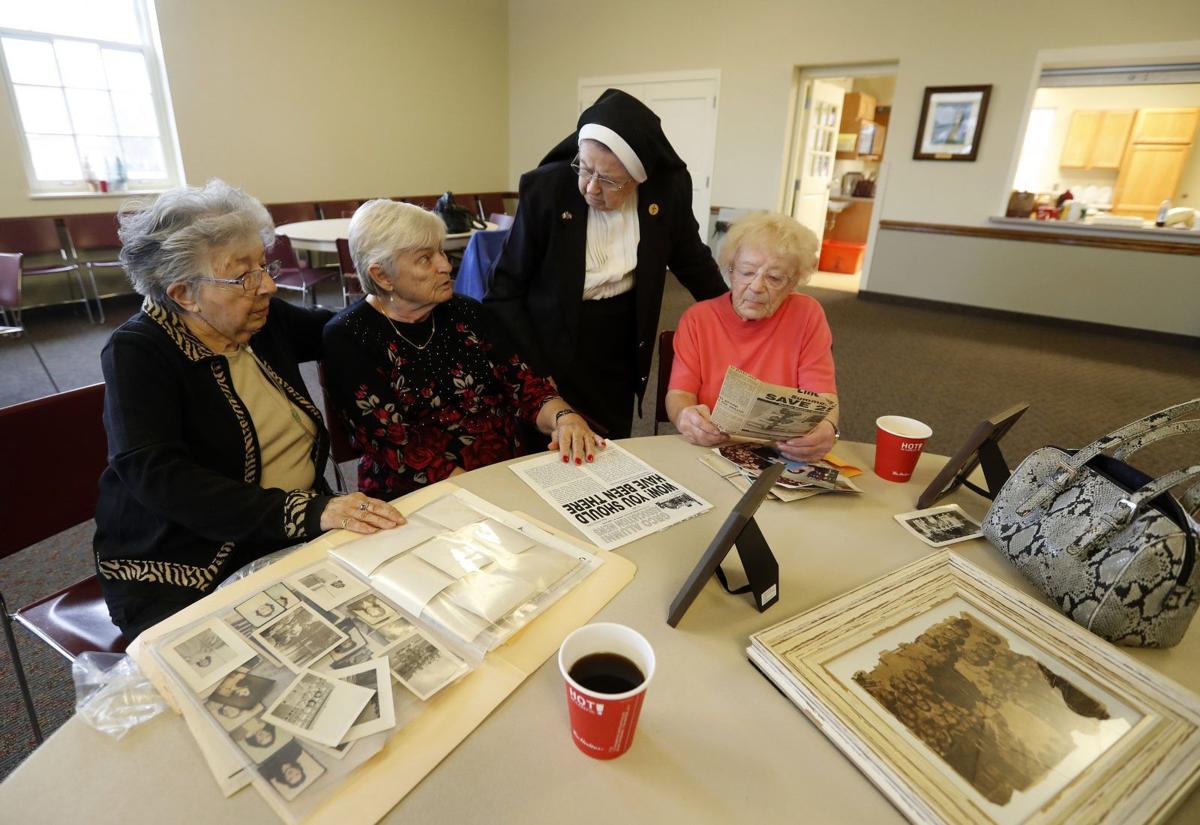 From left to right: Mary Genovese Missana, Myrtle Pickering, Sister Alice Roach and Cleo Cathcart enjoy some coffee and conversation as they look over old pictures and newspaper clippings during a reunion of the German Roman Catholic Orphan Asylum at St. John the Baptist Church in Tonawanda. (Mark Mulville/Buffalo News) 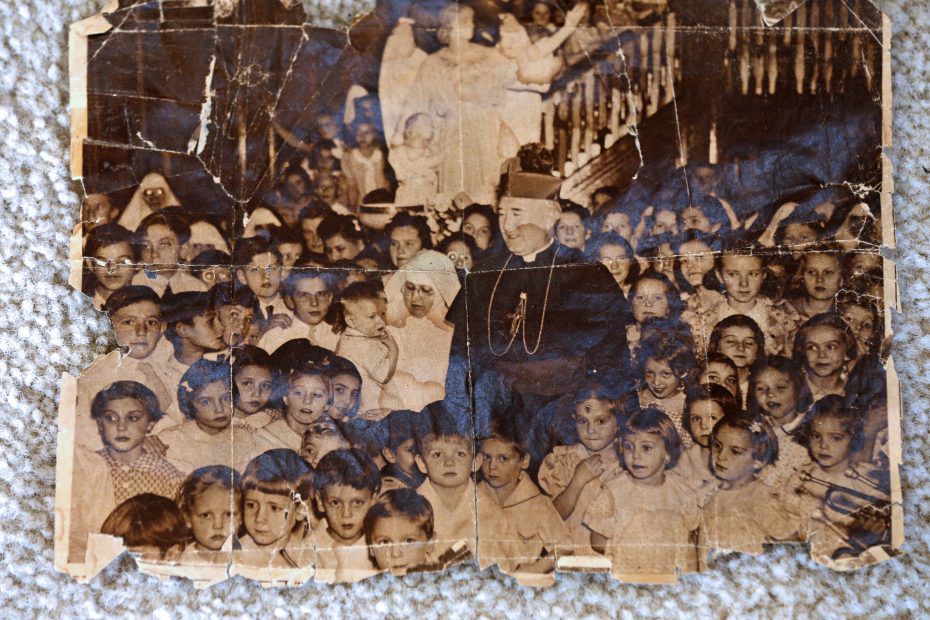 The old photo of children gathered around 1940 or 1941 at the old German Roman Catholic Orphans Asylum that sparked a reunion. (Pickering family photo) 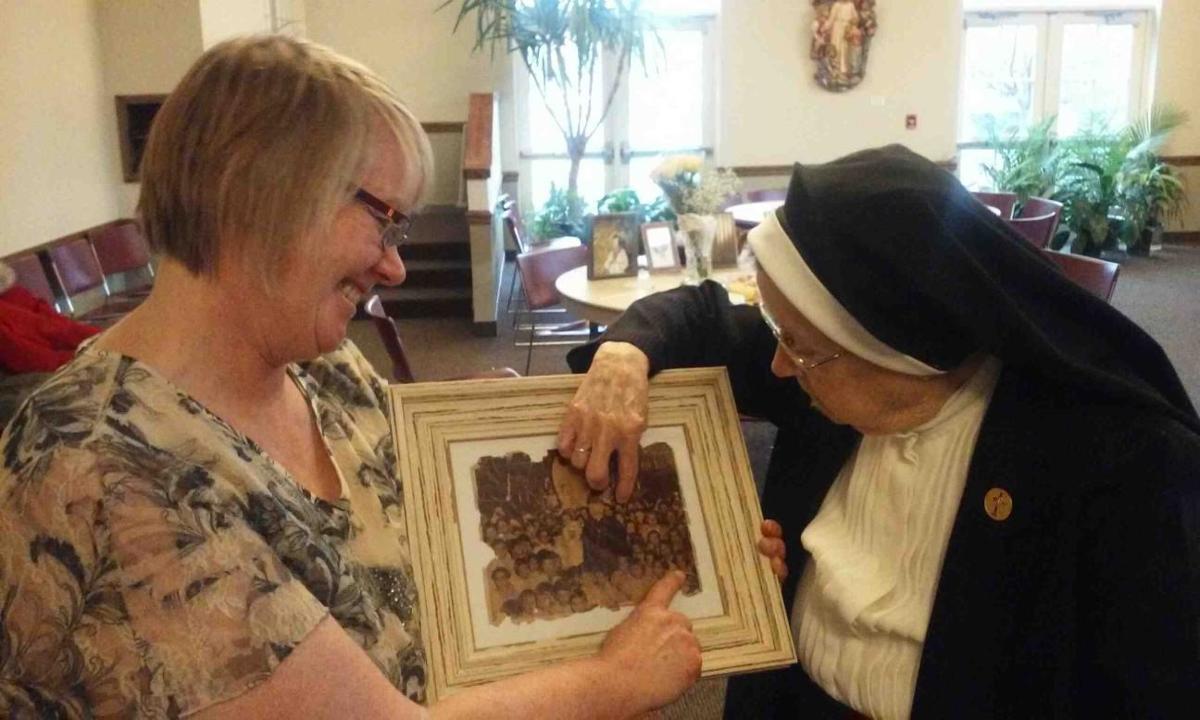 Sister Alice Roach understands the way it goes. She is a retired educator. She knows you often make choices when you are young that serve as a crossroads for everything that follows. Those youthful decisions are easily forgotten as the years cascade into decades, fateful moments lost behind the mountain range of a long life.

Yet at 86, those choices re-emerged in a vivid and unexpected way once Sister Alice walked into a community room at St. John the Baptist Church in Tonawanda. She settled at a table with three other women, all now in their 80s or 90s, who could fully appreciate the trajectory of her childhood.

Orphaned as little girls, they'd been to the same place.

"They were part of my life," Sister Alice said, which meant they also were the bedrock of her success.

More than 65 years ago, Sister Alice joined the Sisters of Mercy in Buffalo. She loved children, and she went on to a career as a teacher and administrator, including many years as a principal. She said that profession was a direct result of her childhood at the old German Roman Catholic Orphan Asylum on Dodge Street in Buffalo, even if she never looked back once she stepped beyond its walls.

Two weeks ago, her friend Jan Terteling gave her a ride to Tonawanda from Wellsville in the Southern Tier, where Sister Alice now lives, for the impromptu reunion of old friends. While she hadn't seen any of them since the 1940s, their simple presence and shared memories almost turned them into family.

Myrtle Pickering and Cleo Cathcart are both about the same age as Sister Alice, and were at the orphanage at the same time. Indeed, in a structured childhood where many things were done in alphabetical order, Sister Alice and Myrtle used to sleep in beds lined up side-by-side, because "Roach" followed closely after "Pickering."

They were joined at the table by Mary Genovese Missana, 92, who'd lived at the orphanage just a little earlier. Mary hoped there would be someone at the reunion of her age, someone whose face she might remember. While that didn't happen, there were enough shared tales and details of the place to ignite images of what she had seen as a girl.

Mary and the others quickly fell into quiet and intense conversations, heads bent forward, arms around each other's chairs, an immediate communion that served as a revelation for the younger women in the room.

"When we were growing up, they didn't talk about it," said Rebecca Cambria, whose mother, Fedora Tonello, went into the orphanage with two brothers. During Cambria's childhood, her mother said little about her life during those years. When her mom died in 2009, it seemed to her family as if those stories would be lost with her.

A month ago, Cambria picked up The Buffalo News and saw a column about Myrtle. It described how she received national attention in 1941 because she wrote a letter to President Franklin D. Roosevelt as a 9-year-old at the Dodge Street orphanage.

Cambria, fascinated, made contact with Myrtle's family, then showed up for the reunion. She learned the other women had been equally guarded about sharing memories with their children. Until Myrtle's own family stumbled onto an Internet account of the letter to Roosevelt, she had not told her kids about a moment that put her in Time magazine.

Nor had she spoken of a group photo of the orphans that emerged only when Colleen Knox, a niece, found it in the papers of her mother, the late Joan Pickering, one of Myrtle's sisters, who had been in the orphanage at the same time.

That photo appeared in The News, alongside the column about Myrtle. Cleo and Sister Alice picked up the paper and recognized siblings in the image, while Cambria – with a jolt – saw the youthful face of her mother.

Calls and emails started flying. Within two weeks, Nancy Schrader, Myrtle's daughter, organized the impromptu reunion. The white-haired women sat around a table and reminisced – Cleo, who considered Myrtle a close childhood friend, said, "this was someone I never thought I'd see again" – and their accounts helped grown children arrive at a realization.

There was a good reason their parents rarely spoke of the orphanage.

It wasn't because they were angry. They had warm memories of the nuns who were in charge, the ones "who were there to look out for us," as Mary Genovese put it. Their long silence was built around the pain they felt when they went in. Every case began with a distinct tragedy, with a separation from parents who had died or were ill or could no longer feed their children.

Amid the Great Depression – a time of hunger and despair – the orphanage was a last hope for the girls.

The journey of Sister Alice was emblematic. When she was 7, her mother died of spinal meningitis. The little girl went into the orphanage with an older brother and sister, and one day – years later – she woke up and learned her siblings were gone, moved into foster care.

No one told her it was about to happen. That feeling of loss remains fresh to her today. Sister Alice would eventually reunite with her siblings through utter chance, but the wounds of separation – of losing those she loved the most – left her fearing the same thing might happen someday if she dared to have a family of her own.

It was an unbearable thought. For that reason, "I was afraid of getting married," Sister Alice said. Yet she loved children, and she saw a different way of creating an extended family. She became a nun and spent a lifetime in education.

As for Cleo, she never married, but for almost seven decades she worked, often at two jobs, retiring only when she turned 84. Myrtle rose to serve as a department head at Erie Community College. Mary Genovese – joined at the reunion by Maryann Madden, a daughter – married Paul Missana, loved their children and spent a lifetime trying to share, by word and action, a simple message for those closest to her:

Once you've lost everything, you thank God for the quiet blessings.

"She thinks she was lucky," said Anita Skorka, another of her daughters, speaking of the orphanage. "It was the only home she ever had."

The lingering power of the reunion has only grown on Sister Alice. When she met her old friends, she did her best to push any hard images from her mind. What she focused on, instead, was her simple appreciation for clean sheets and regular meals, for the affection and concern of the nuns who ran the place, and her gratitude at what they inspired her to do.

"It brought back many memories," said Sister Alice, "but more than anything it made me love the way things turned out."

From left to right: Mary Genovese Missana, Myrtle Pickering, Sister Alice Roach and Cleo Cathcart enjoy some coffee and conversation as they look over old pictures and newspaper clippings during a reunion of the German Roman Catholic Orphan Asylum at St. John the Baptist Church in Tonawanda. (Mark Mulville/Buffalo News)

The old photo of children gathered around 1940 or 1941 at the old German Roman Catholic Orphans Asylum that sparked a reunion. (Pickering family photo)