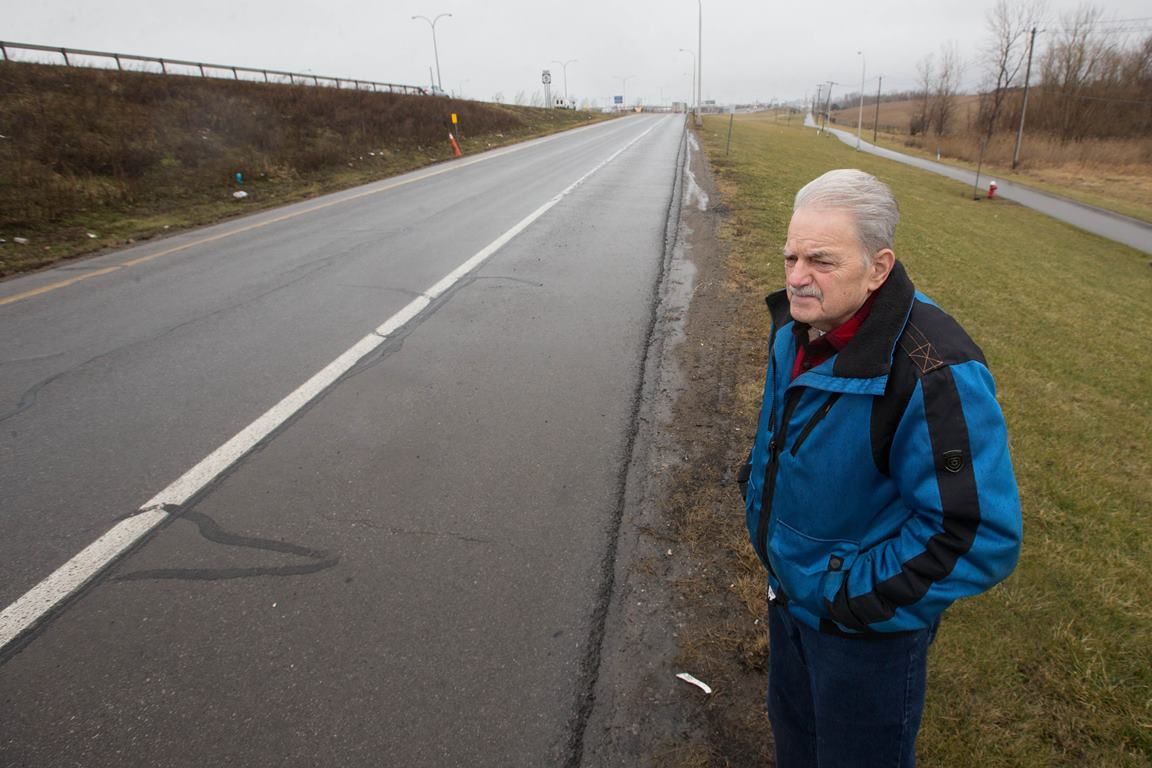 John O'Rourk, a retired Buffalo K-9 officer who was on the job for 27 years, stands at the ramp from Tifft Street to the Skyway where - during the Blizzard of '77 - he was involved with the rescue of stranded motorists. (Derek Gee/Buffalo News) 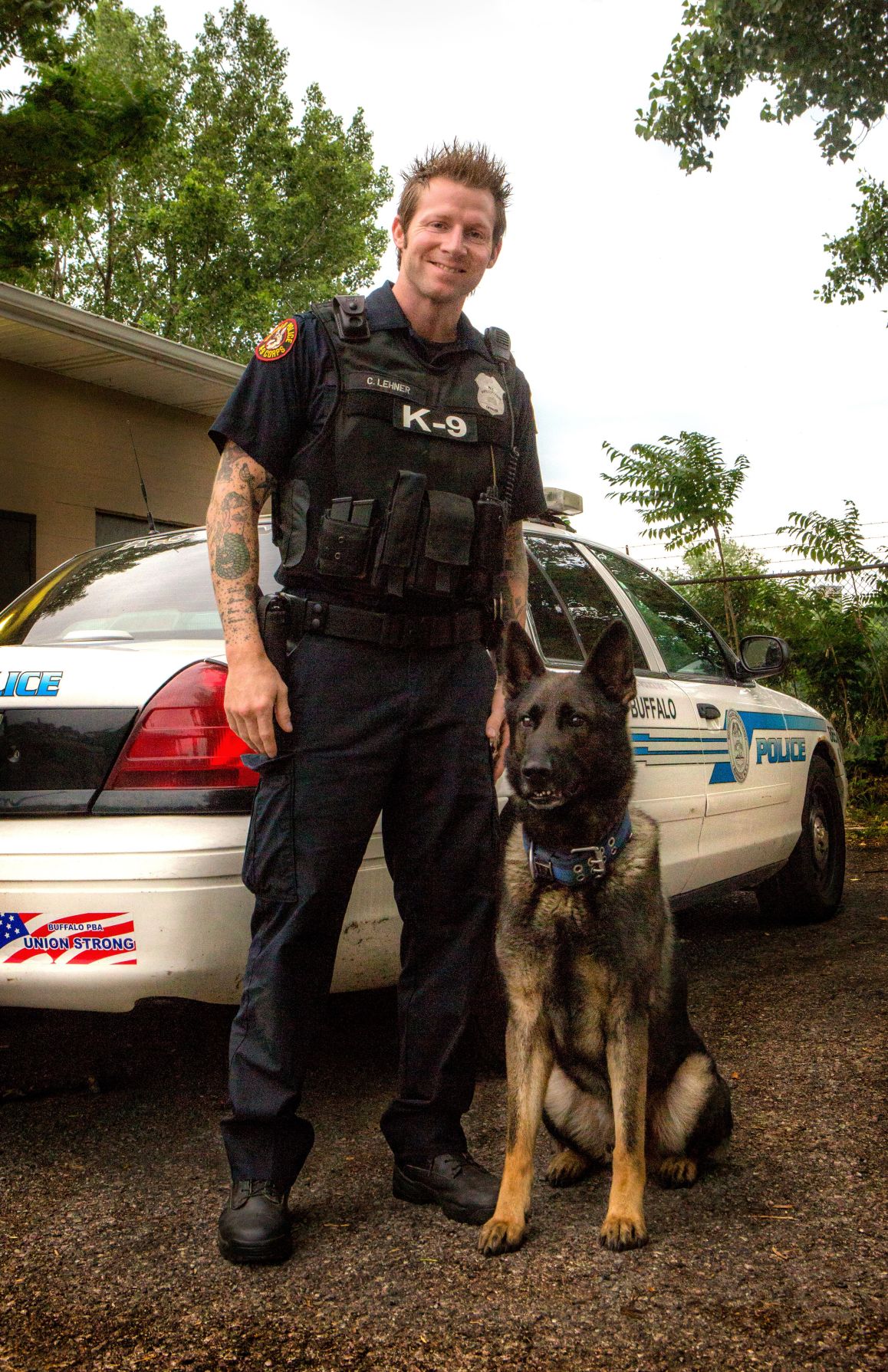 John O'Rourk often apologizes for his memory. The retired Buffalo police officer suffered a massive heart attack 18 years ago. He'd been using the snowblower at his West Seneca home. He started to feel "a little wobbly." He suddenly endured crushing pressure — what he describes as "an elephant's foot" — upon his chest.

At the hospital, the doctors decided the damage was so severe they couldn't operate. O'Rourk's life was at high risk. They put him in an induced coma for 11 days. He survived to reach a point where he'd go to the gym several times a week, but he said that recovery came with a subtle cost:

His memory for details, for specific moments, is often gone.

Maybe so. Yet collective memory is what gives O'Rourk's perspective such resonance when he speaks of the passing of Buffalo Police Officer Craig Lehner.

"You've got to understand, this is family," said O'Rourk, 76. "It doesn't matter if you knew each other or not. This is like one of your kids. It's one of us."

Sean Kirst: A police dog runs to the river in quest for missing officer

Lehner, a police diver, died in an Oct. 13 training accident in the Niagara River. A grieving community has gone blue in his memory, from porch lights in the city to beacons at the peak of City Hall. Lehner's memorial service Wednesday at the KeyBank Center is expected to draw thousands upon thousands of law enforcement officers, first responders and mourners.

At 34, Lehner had already earned deep respect within the department for his passion, for his commitment to his job. He spent his last year of duty as a K-9 officer in Buffalo, often working late with his dog Shield — a 4-year-old German Shepherd born in the Netherlands — at the K-9 training grounds on Louisiana Street.

In that devotion, O'Rourk feels a strong bond – even though he and Lehner never met.

O'Rourk will be unable to join an estimated 5,000 to 10,000 members of the law enforcement community expected to attend Lehner's funeral. The heart surgery that didn't happen many years ago is happening this week. A couple of weeks ago, after a workout at the gym, O'Rourk felt familiar pressure on his chest. Tests showed a blockage. The doctors told him inserting stents, a simpler process, would not be enough to solve the problem.

Until then, O'Rourk's been warned – as much as possible – to stay off his feet.

He wishes he could be at Lehner's calling hours, even though he knows it is impossible. O'Rourk served for 27 years with the police department. The first half was spent with a partner, George Smith, who retired as a lieutenant and still meets O'Rourk routinely, for coffee.

They were honored for heroism after they helped catch a young woman who jumped from the window of a burning apartment. During the Blizzard of 1977, they helped save dozens of motorists who were trapped in buried cars, near the Skyway.

They were so close, so linked by the job, that Smith recalls they could finish each other's sentences.

The second half of O'Rourk's tenure was spent as a K-9 officer, which gives him an especially vivid appreciation for Lehner.

O'Rourk worked with two police dogs, Casey and Pepe, both German Shepherds, both rescue animals. He received Casey from a veterinarian in Eden. The dog had been neglected, leashed up, pelted by stones and debris. With the help of the late Owen Tober, a city firefighter with legendary expertise in training dogs, O'Rourk went to work.

"The dog was fantastic," O'Rourk said of Casey, speaking of a connection so close it's hard to give it words. In too many instances to count, Casey went ahead in dark buildings, seeking out suspects hiding in closets or in attics.

When Casey grew old, when the animal's back gave out, O'Rourk found Pepe, a young Shepherd whose sheer energy was too much for an overwhelmed family in Dunkirk.

Other officers looked at Pepe and shook their heads. They doubted he would ever adapt to the new role. O'Rourk, determined, worked tirelessly with the dog. He said Casey not only accepted Pepe, but quietly served as his model, until O'Rourk was walking the two dogs, side by side.

Pepe was a success. He lived at O'Rourk's home. Years later, after O'Rourk retired, he said the dog collapsed and died in the backyard while O'Rourk was away for several weeks in North Carolina, the first time he'd ever been separated from the dog.

At that thought, the voice of the tough old cop began to crack. O'Rourk was moved when he read tales of the devotion Lehner brought to his dog Shield, how they'd train together into the evenings on Louisiana Street.

He is glad the police intend to reassign Shield to another Buffalo police officer, as Commissioner Dan Derenda confirmed Monday. But he also knows that it will take some adjustments, in the months ahead, for a dog who'd grown accustomed to every subtlety of Lehner's voice and expression.

"Being a K-9 officer, it's a lot different from when it's just you and another copper working the street," O'Rourk said. "That dog is always at your side. He puts his faith in you. When they talked about how they didn't know how (Lehner's dog) would respond without him, I knew exactly what they meant. You don't train each other's dogs. That dog knows you alone."

Sean Kirst: In the Blizzard of '77, officers saved lives while 'all hell broke loose'

Smith, his old partner, has his own struggles with his health. Stenosis of the spine makes it impossible for him to walk without a cane. But Smith's son served with Lehner with the Army National Guard in Iraq, and Smith hopes to sit in a car and observe part of the funeral procession.

"This is a family member," Smith said of Lehner. "That's how it hits you."

As for O'Rourk, confined to his home, he intends to closely follow the services on television. There are certain things, he said, every officer understands: The feeling of knocking on a porch door amid the angry uncertainty of a domestic argument, or the images you try to set aside after responding to some horrific accident, or the faith and comfort you always find in your partner.

For years, for O'Rourk, that was Smith, his close friend. Then – with an entirely distinct intensity – it became his dog, an experience that O'Rourk said creates a lasting kinship with Lehner.

"He's my brother," said O'Rourk, bracing for a week of having work done on his heart.

Erie County's "orange zone" isn't a total shutdown of essential businesses, yet some here are closing down preemptively.

With no inkling how long the closure might last, many business owners say they won't make it through a second round of suffering.

John O'Rourk, a retired Buffalo K-9 officer who was on the job for 27 years, stands at the ramp from Tifft Street to the Skyway where - during the Blizzard of '77 - he was involved with the rescue of stranded motorists. (Derek Gee/Buffalo News)