Subscribe for $1
Read Today's E-Edition
Share This
Sean Kirst: On Mother's Day, the gifts of knowing 'Amazing Grace'
0 Comments
Share this
Support this work for $1 a month
Sean Kirst

Beth Kuerzdoerfer’s philosophy for Mother’s Day is not really so different than the way she has seen life, for the last 24 years. She will spend much of Sunday at the People Inc. group home on Hertel Avenue where her daughter resides, celebrating in the ways she and Grace Lipczynski always appreciate together:

They will follow such routines as watching episodes of “SpongeBob SquarePants,” the cartoon that is Grace's favorite show.

Yet the day will have extraordinary meaning, based on these revelations. Beth will not forget a Mother's Day two years ago, at one of the most frightening periods of separation caused by danger from Covid-19, when the closest she could come was standing in the parking lot while the staff brought her daughter, bundled up, to the door in her wheelchair.

Above all else, Beth will remember it was only a month ago that Grace was at Kenmore Mercy Hospital, so ill with sepsis, infections and pneumonia – none of it related to the pandemic – that Beth sat with the doctors and quietly agreed, if the situation came to it, that they would not use extraordinary measures to keep Grace alive.

Whatever happened, it would involve the dignity Beth sees as bedrock in her daughter’s life.

When Sean Kirst lost his mother years ago, Mario Pirastru of Niagara Falls gave him a message that he has never forgotten – and that rings true for Pirastru

Grace rallied. Within a day or two, her fever dropped and she was laughing again. To Beth, once you have been at that place with someone you love, the clarifying factor in the way you greet each day is the constant nature of that perspective, moving forward.

“That she’s here is a miracle,” Beth said of her youngest daughter. “I can’t even say how many times she’s been hospitalized and the doctors have said to me, ‘You’d better get your family over here.’ ”

You think of that, Beth said, and you find Mother’s Day.

The young woman Beth calls "Amazing Grace" copes with cerebral palsy, spina bifida, intracranial hemorrhaging and a seizure condition. She cannot walk or feed herself, and she has endured dozens of surgeries since infancy. Beth said the doctors equate Grace's cognitive abilities to those of a 1-year-old. She has the moods, the ups and downs, of all of us.

But when she is on a roll like the one last Thursday, when she responds with laughter and delight to her mother’s jokes and songs, it becomes impossible not to share in Beth's conclusion:

The treasure belongs to a visitor.

“You can be having the absolute worst day,” Beth said, “and you come in here and she changes everything.”

I found out about Beth and Grace a few months ago from Dan Herbeck, a colleague who met mother and daughter while working on a separate story. Deeply moved, he basically told me: If I needed a Mother’s Day column, he had seen it.

The basic elements, I quickly learned, go like this: Beth, who works in the personnel office for the town of Cheektowaga, has two daughters, Katherine and Grace, whom she raised as a single mom. Even in saying that, Beth reshapes the definition:

You are not alone, she said, when your parents, siblings, older daughter and extended family all see your needs and simply show up. Their allegiance is another part of what she celebrates on Mother’s Day, “the way Grace helps me see all the kindnesses of others (and) what it means when someone just gives you the chance, when you need it, to get a good night’s sleep.”

Sunday also falls within National Nurses Week, a remembrance of particular meaning to Beth. Not long ago, when Grace was at such risk at Kenmore Mercy, Beth was walking along the corridor when she heard singing, a beautiful voice, coming from her daughter’s room.

It was a night nurse, in the evening quiet of the hospital, singing a medley of famous Disney songs. Beth stopped and listened and then went in, blown away, and as Beth attempted to say thanks the nurse sent it bouncing back.

She loves to sing, she said, and Grace gave her the chance.

While Beth looks toward others and speaks of gratitude, her daughter Katherine offered her ultimate praise: “I’ve never met a better mother.” Katherine said Beth manages to be intensely aware of Katherine’s life and dreams while balancing Grace’s profound needs, and she said her mother's sustaining force is a sense of humor.

Sean Kirst: In the middle of the night, two words by text from Ukraine comfort East Aurora mom

We read every day about refugees whose lives are torn apart amid bedlam around the world. It becomes different when it is your son, his wife and your grandson, Sean Kirst says.

Ask Katherine for a favorite memory of childhood, and she remembers singing along with her mom on a long drive to Phil Collins’ “You’ll be in my heart,” while Grace, sensing their mood, laughed in joy. Katherine recalls how they used to eat so much Hamburger Helper, on the fly, that she thought she never wanted to taste it again – but now she looks back on that easy-to-prepare meal as a sign of the good-natured resilience that held them all together.

As for a story they often tell, Beth has always loved Honeoye Lake, to the point where her aunt, Bernice Smith, painted a giant mural of the lake – complete with images of SpongeBob and everyone in their family – across the wall of Grace’s room on Hertel. Beth was always enthralled by swans on the quiet water, and Katherine said Beth was admiring the majestic birds one day when she got a little too close.

“The swan attacked her,” said Katherine, laughing so hard at that instant of mayhem she could barely describe it, though the tale is now a regular part of family lore.

Beth’s parents, Pat and Norman, live "just around the block" in Cheektowaga. They are rock-solid anchors, Beth said – “I wouldn’t have gotten through any of this without them” – and she grew up as a witness to an everyday selflessness and simplicity in her own mom, who would just as soon have a hot dog if given her choice of a favorite meal.

To Pat, the tribute should be reversed. “No one,” she said of Beth, “can believe the strength she has.”

Her daughter sees it as keeping a promise. Grace weighed only a pound and a half when she was born four months premature. Beth was not allowed to hold her at first, and there was no assurance the child would survive her time on a ventilator. What Beth remembers, in a way that remains vivid, is the first chance she had to hold her daughter’s hand, fingers tiny against the landscape of her own palm.

In that instant, Beth began understanding Grace's gift. Almost a quarter-century later, she said it is an appreciation shared by such staff members as Scott Caffrey, a team leader at the People Inc. group home on Hertel who has spent countless hours with mother and daughter in hospitals and waiting rooms.

For years, Beth cared for Grace at home until the task became impossible. Today, she builds her life around her job, her family and visits to Hertel, around moments when her daughter smiles to hear her voice. While Grace does not speak, her mom can tell you this:

She loves SpongeBob and the Goo Goo Dolls and listening to stories about Curious George. She loves Christmas lights and her patron saint – regardless of whether that status is official within the church – is Father Nelson Baker, to the point where Grace and her family have taken part in celebrations of Baker’s life at the Our Lady of Victory National Shrine and Basilica in Lackawanna.

What is clearer each day, Beth said, is how her daughter has helped her in sweeping ways to be a better person. Beth now has a far deeper understanding of the rich community of Western New Yorkers born with developmental disabilities. The lesson she draws from looking out a hospital window from her daughter’s bedside during the Yuletide, or on a gorgeous summer morning, is simply realizing that quiet rituals lived out every day on city streets are not some grinding tedium but a privilege, a truth you can experience for your whole life and never fully grasp.

On Mother’s Day, all that in mind, Beth looks toward her Grace. 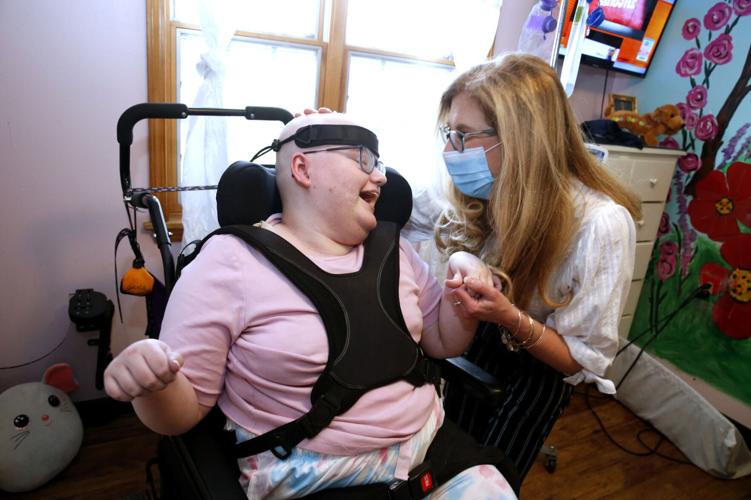 Taking comfort in a mother's touch: Beth Kuerzdoerfer and daughter Grace Lipczynski spend some time together in Grace's room at a group home on Hertel Avenue. 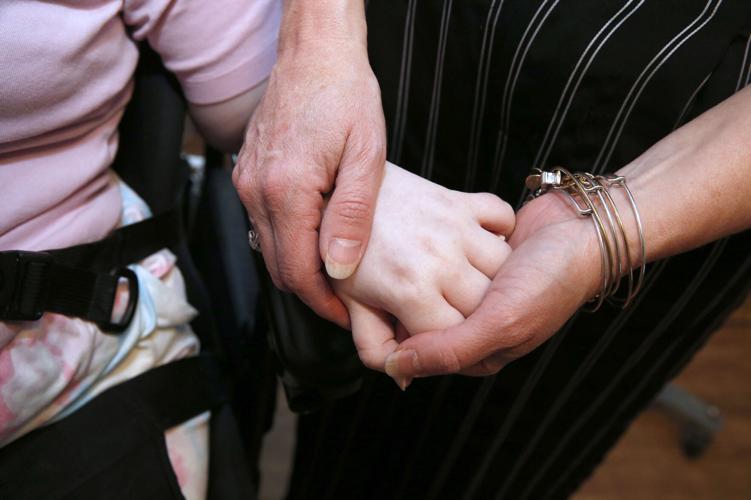 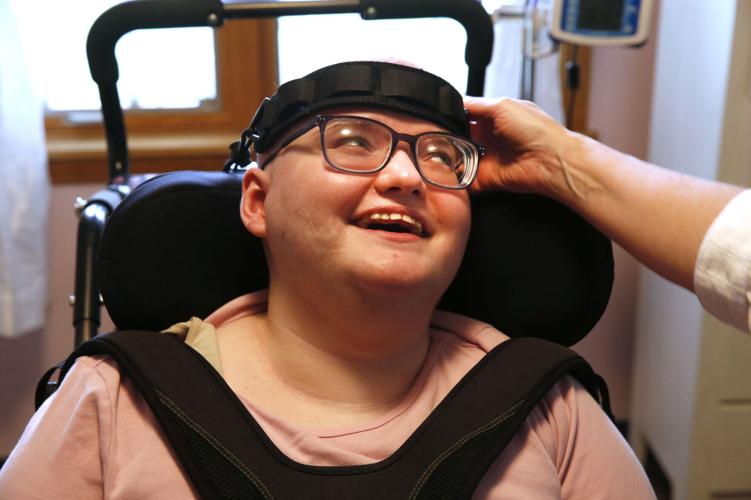 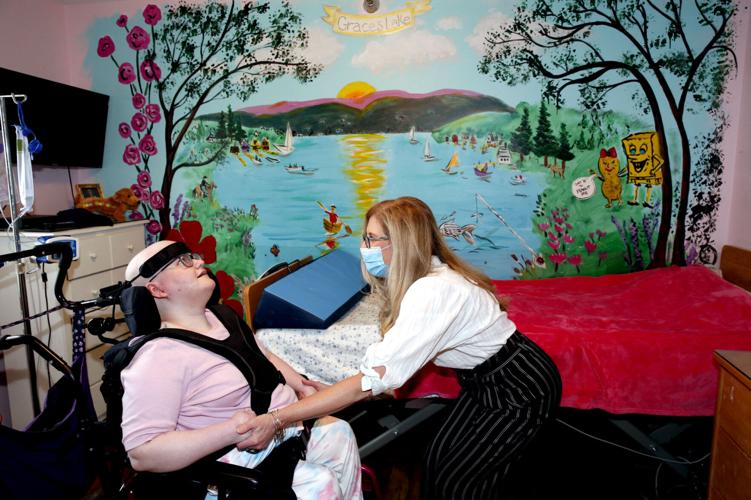 Beth Kuerzdoerfer and daughter Grace in front of mural of Honeoye Lake painted by Beth's aunt.