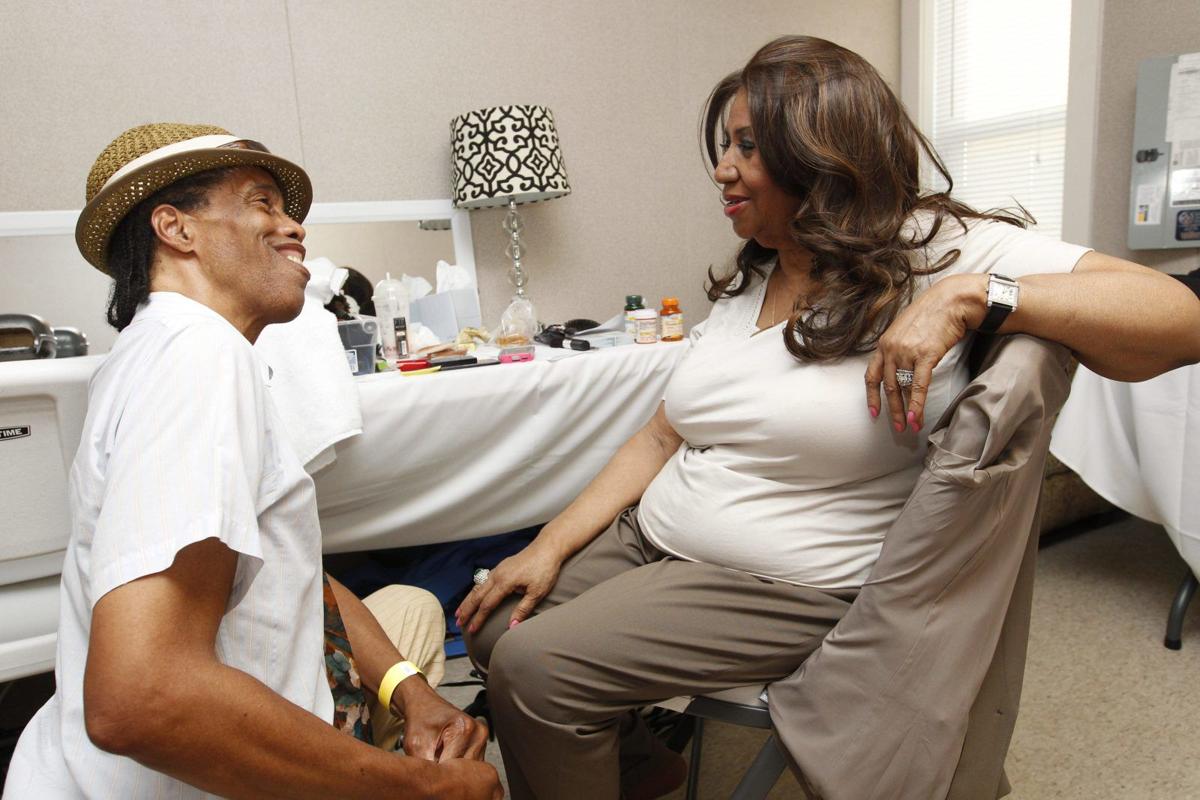 Aretha Franklin at ArtPark with Wayne Blassingame, whose family she knew as a child in Buffalo. (News file photo) 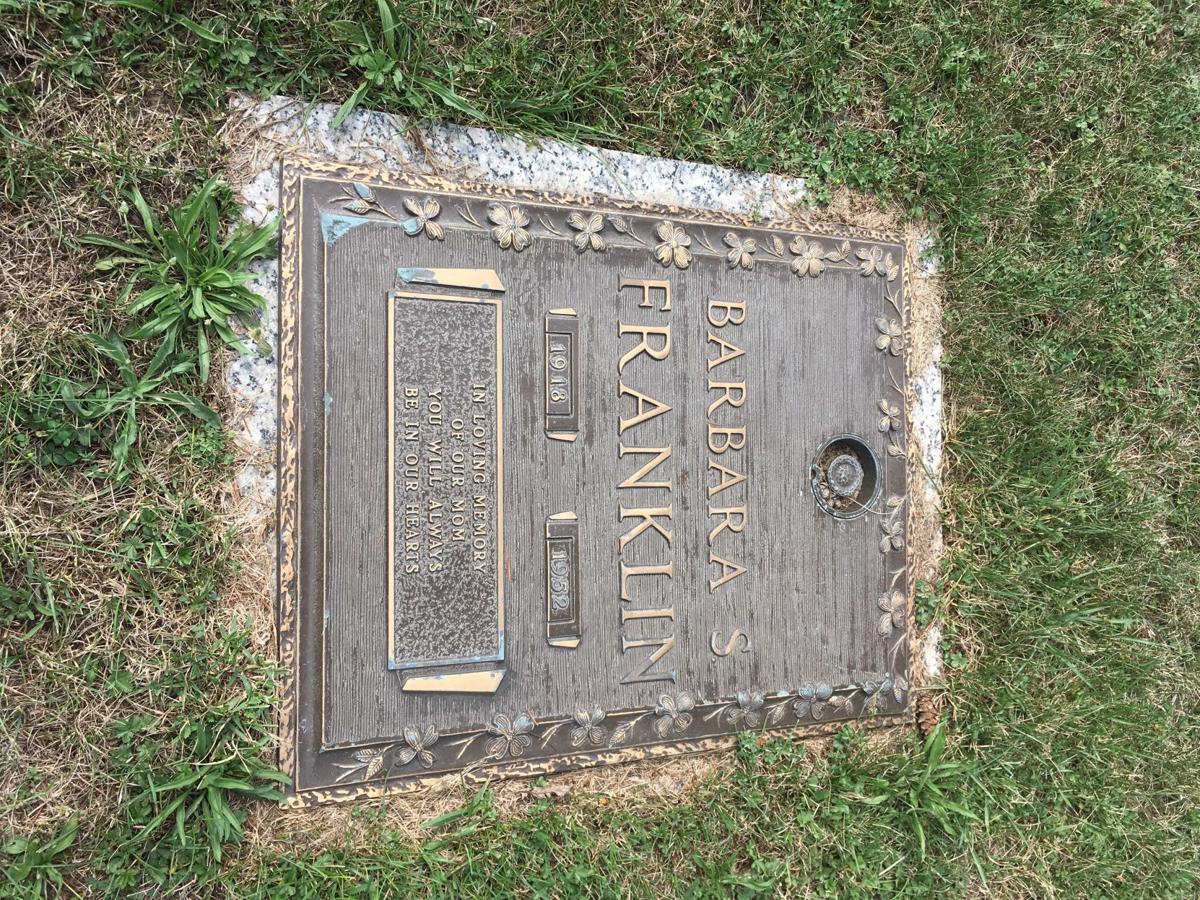 The gravestone of Barbara Siggers Franklin, at Forest Lawn Cemetery. (The Buffalo News) 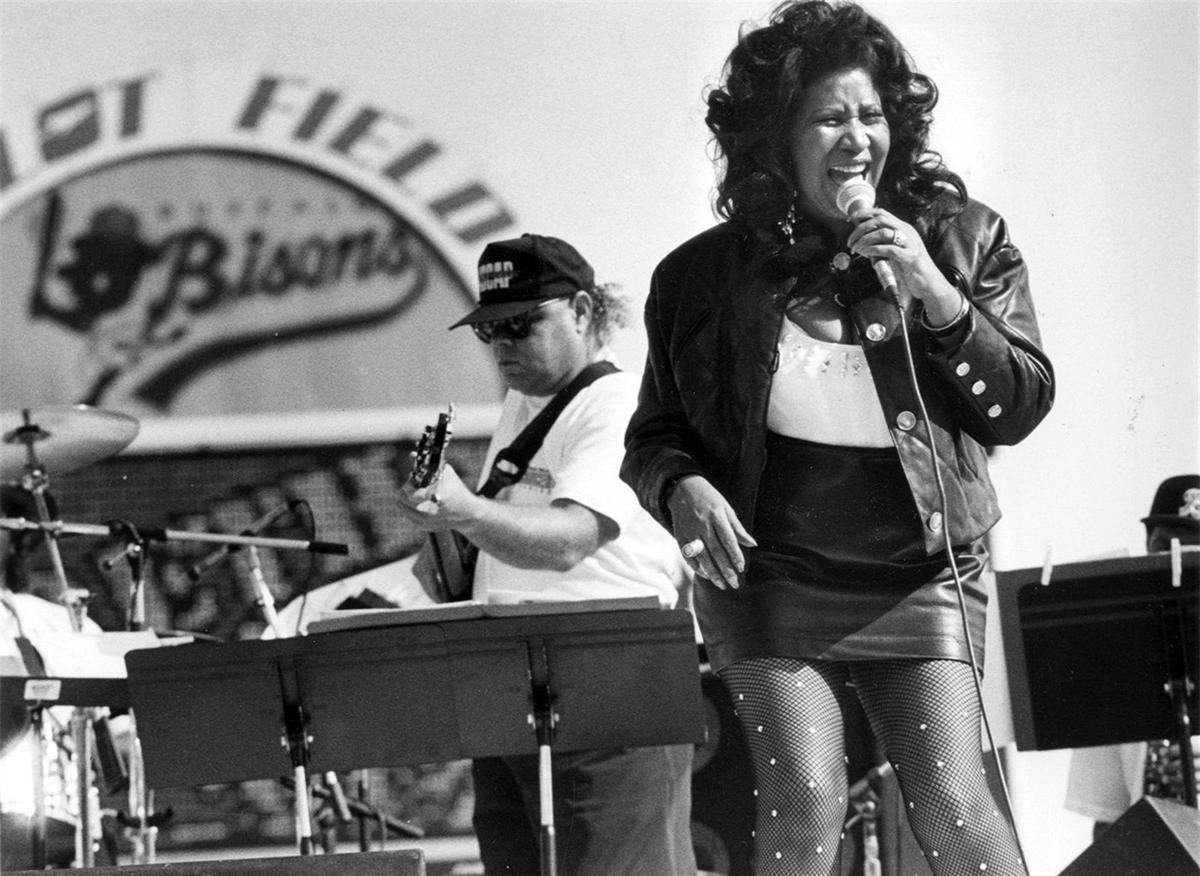 Aretha Franklin performs at the then-Pilot Field in Buffalo, 1991. (The Buffalo News/file art)

At 94, Ruby Siggers has spent most of her long life in Buffalo. In the 1940s, she became an aunt by marriage to a little girl who would grow into one of the greatest, most transcendent vocalists in the world.

By the time Aretha Franklin was 10, her regular visits to Buffalo were over, and she will always be identified most intensely with Detroit. Still, Siggers was a close witness, someone who saw a truth she thought of Thursday morning, when she learned Aretha had died, at 76, in hospice care.

If Aretha was defined by the pain and passion in her voice, a raw and searing honesty that carried her vast talent to an almost untouchable level, then Buffalo was far more than a place that she passed through.

Amid both the joy and terrible heartbreak of her childhood, it was a city that amplified her brilliance.

She says as much in "From These Roots," her autobiography. Her adult memories of Buffalo were centered around a front porch at 21 Lyth Ave. in the city's Cold Springs neighborhood, a house that still exists. According to records at the Buffalo History Museum, Aretha's mother lived there while she was a nurse's aide in the early 1950s at the old Meyer Memorial Hospital, predecessor to the Erie County Medical Center.

Barbara Franklin was separated from Rev. C.L. Franklin, Aretha's father and a nationally renowned minister. He had gone with the family to Detroit in 1946, after he spent two years preaching at Buffalo's Friendship Baptist Church.

Siggers recalls how Aretha and her siblings from that marriage — Erma, Cecil and Carolyn — lived in Detroit, but would return to stay with Barbara and her oldest son, Vaughn, during childhood summers. Vaughn was the All-High champion in both the 100-yard and 220-yard dashes at Masten Park High School and was always "a top-notch guy," according to an old friend, Ron Peoples, a longtime educator and youth counselor in Buffalo.

In her memoir, Aretha wrote of how she would wait on that front porch on summer afternoons for her mother to come home from work. She remembered how Barbara would climb the porch steps, settle into a rocking chair, and then draw Aretha and Carolyn to her side. On gentle summer days, Barbara Franklin would rock the children and speak to them "of better things to come," Aretha wrote.

Barbara did not live to see the truth of her own prophecy. When C.L. Franklin preached at Friendship, Barbara was his pianist and choral director. Ruby Siggers, a longtime member of the First Shiloh Baptist Church, is one of the few people alive who has heard both Aretha and her mother sing. Barbara Franklin, Siggers said, "had a beautiful voice," an unforgettable Gospel talent.

She died in 1952, at 34, of a massive heart attack. Siggers recalls the stunned grief of the crowd that gathered at Friendship Baptist, and then at Forest Lawn, for the funeral and burial. While Aretha was famous for the way she protected her family's privacy, in her memoir she spoke bluntly to the wounds left by her mother's death.

"I cannot describe the pain, nor will I try," Aretha wrote. She remembered sitting on the curb on Lyth Avenue "for a long time" after returning from the cemetery. She "sat there in tears," she wrote, looking at the porch and seeking comfort in the time she spent at that house, with her mother.

In a sense, the moment was both her goodbye to Buffalo and a piece of the love and hurt that helped create the Queen of Soul.

During those years, Siggers was married to Aretha's uncle Simuel, though the couple later divorced. She came to Buffalo as a child from Virginia, part of the "great migration" of African-Americans to the North, newcomers who built a kinship in many neighborhoods and churches on the city's East Side.

C.L. Franklin and Barbara Siggers met in Mississippi, Siggers said. A biographer, Nick Salvatore, has written of how Aretha's father saw firsthand the cruel intolerance and bloodshed tied to Jim Crow segregation in his home state, and how he eventually welcomed the chance to preach in the North. Shared experience — and a shared love for the church — helped forge a bond between Ruby and Barbara after the Franklins arrived in Buffalo.

Siggers can remember Aretha, as a small child, climbing up to study the piano keyboard while the family lived on Glenwood Avenue. The little girl displayed a clear affinity for music. "Even then," Siggers said, "I knew she had that talent."

Barbara's marriage broke up once the family moved to Detroit. She chose to return to Buffalo, Siggers said, because her mother, Clara Wofford, was still here with some other family members, "and because she knew a lot of the people and just liked the place." She stayed with her mother and stepfather. When Barbara's children visited in summer, they would sleep at the home of some neighbors named Pittman.

In her memoir, Aretha laid out a string of vivid childhood memories of Buffalo. She recalled how a mysterious neighborhood boy would always sing, "Hurry home, come home," in the middle of the street, at midnight. She wrote of how she once heard B.B. King's powerful blues blasting from the door of a Buffalo nightclub, a spot that local historian and educator Lum Smith believes was probably the legendary Revilot Lounge.

Aretha described how one of her earliest friendships — as well as her earliest "teenybop crush" on a boy — pivoted off a pair of siblings, Gordon Blassingame and his sister, Charlotte Blassingame Rushin. They lived across the street from the Pittmans, on Ada Place.

Gordon, a Marine Corps veteran, is now in Georgia, while Charlotte lives in Memphis. They speak of Aretha as part of a warm and safe childhood collage.

"She was a very young girl, a tomboy, and I remember she would chase me around, you know, up and over a fence or up into an apple tree that was in a backyard," said Gordon, who received a call from Aretha a few years ago, while she visited with his brother Wayne in the dressing room after a concert at ArtPark.

During those quiet summers in Buffalo, Aretha spent much of her time with Charlotte Rushin, who was the same age. Charlotte recalls how they would buy ice cream or lollipops at a corner store on Jefferson Avenue run by the Cohen brothers, or how they would talk while taking endless bicycle rides around the block.

Charlotte can picture all the neighborhood children crowding onto porch steps at Ada Place to play "stone school," where someone would shout out a color that would lead to a frantic game of tag, or the day Aretha borrowed her brother's "big kid" bicycle, lost control of it and banged up her knee when she crashed into a parked truck.

Their contact diminished after the death of Barbara Franklin. Decades later, as adults, Charlotte said she and Aretha would exchange a text message, from time to time. Charlotte is now retired from a career as a nurse and a teacher, and she always assumed the two old friends would meet once more, face-to-face, for a long conversation.

Thinking of it, Charlotte began to weep.

"I really wanted to say goodbye, just one chance to say goodbye," she said. "Here was a woman who stood before queens and presidents. How many women — how many black women — had ever done that before her? That voice was just so beautiful, and once you heard it you never forgot it, and I wish I could tell her how proud I was of the way she shared the gift God gave her.

"But as kids we weren't thinking of her becoming famous. She was a fun person to be with, and she wasn't singing around us like that. I loved her in Buffalo because she was just Aretha Franklin."

As for Ruby Siggers, she remained here, long after the rest of the family moved away. She spent many years working at the old Buffalo Psychiatric Center before she retired, and over the decades this city became home. Her memory, at 94, is extraordinarily keen, a perspective that allows her to see a compelling truth.

She remembers the Queen of Soul "as just this tiny little girl, playing outside" on the East Side, which means, in a way, the tale is never over.

Any child we drive past on any Buffalo street, the little kid riding a too-big bike or the one sitting alone, lost in thought on the curb?

Take a good look. It just might be Aretha.

Sean Kirst is a columnist for The Buffalo News. Email him at skirst@buffalonews.com or read more of his work in this archive.

As Cleo Alexander enters the year of her 100th birthday, she keeps a sense of wisdom, humor and faith about Buffalo.

Sean Kirst: At 100, Cleo Alexander was a witness to staggering history in Buffalo

“She helped the hopeless feel empowered, she helped the lost have a sense of direction, she was an inspiration to people who didn’t believe in themselves,” her son David said.

Aretha Franklin at ArtPark with Wayne Blassingame, whose family she knew as a child in Buffalo. (News file photo)

The gravestone of Barbara Siggers Franklin, at Forest Lawn Cemetery. (The Buffalo News)

Aretha Franklin performs at the then-Pilot Field in Buffalo, 1991. (The Buffalo News/file art)