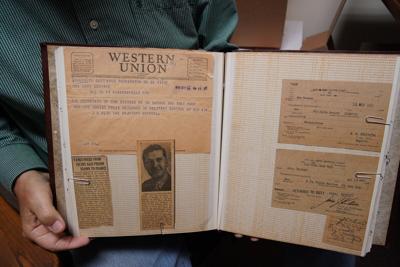 I met Paul Lewis on Veterans Day morning at the Wehrle Diner in Cheektowaga. It is a place where Lewis, a regular, speaks with warmth and knowledge to the servers about their lives beyond their jobs, an atmosphere that explains how this column came to be.

Lewis, retired from teaching at Cleveland Hill and from coaching the Canisius College cross-country team, arrived with an old scrapbook in a plastic bag. He first saw it a couple of weeks ago, he said, when he showed up at the Wehrle to share breakfast with a young man he mentors from St. Luke’s Mission of Mercy.

They settled in near a table occupied by a group of women that included Mary and Ellen Missert, sisters Lewis knows from St. Aloysius Gonzaga, the church they all attend in Cheektowaga. Mary, the church secretary, waved Paul over to explain a kind of astounding challenge.

In the spring, longtime parishioners Bernie Wojtkowski, 85, and his sister, Nancy, 78, died only a few weeks apart. Mary said neither of the siblings had children. Responsibility for the estate passed over to Erie County Surrogate Court, and household possessions eventually went up for sale.

Mary felt she needed to be at that event. She feared that whatever did not sell “would go into a dumpster,” as she put it, and there were things she believed should not be lost. She was a longtime friend of the Wojtkowskis. Bernie was legally blind, while his sister had a hearing impairment, and Mary admired the way they spent a lifetime serving as each other's eyes and ears.

As she thought of that mutual commitment, she could not stand the possibility of their most precious family heirlooms being trashed.

So Mary spent what she brushed off as a modest amount of her own money to buy such items as albums of family photographs, just in case other relatives might someday want them. In going through images that must have been especially precious to Bernie and Nancy, the Misserts made a discovery of aching historical power.

“They found this,” Paul said, reaching toward the plastic bag on the table.

It held a scrapbook created long ago for a guy named Felix Bociak, a retiree from the old International Paper mill who died in 1982, without children, in Niagara Falls. Mary, who often provided Bernie with rides to church, said he frequently spoke with affection and reverence of an uncle who survived a harrowing time in the war. At the sale, she realized Bociak's scrapbook told this tale, and that it must have been handed down to his nephew and niece.

On that Sunday morning at the diner, Mary passed it on to Lewis. She knew of his passion for history and hoped he could find the best place for it to go. According to Megan Smolenyak, an acclaimed genealogist and researcher who helped in a major way with this piece, Felix was the child of Polish immigrants, Maryanna Bociak and her husband Joseph, an industrial blacksmith who helped found the old St. Stanislaus Kostka Catholic parish in Niagara Falls. The couple had several children, including Bernie and Nancy’s mother – a daughter whose married name was Genevieve Wojtkowski.

The scrapbook is a wrenching wartime chronicle whose contents, Lewis suspects, were kept by a mother close to despair, until she encountered what she must have seen as a miracle. It follows Bociak's military service with documents and snapshots, from the moment he was inducted in 1942 at Fort Niagara to the months he spent training in Kentucky – his proud parents, as the images show, visited him there – to his journey into combat as part of the 134th Infantry Battalion.

That leads into a sequence of searing documents, beginning with a telegram that Felix's parents received at their 38th Street home in Niagara Falls at 10:49 p.m. on Jan. 26, 1945 – meaning they read this message late at night:

“The secretary of war desires me to express his deep regret that your son, private first class Felix Bociak, has been reported missing in action since five January in Belgium.”

He vanished during the Battle of the Bulge, a desperate effort by the Germans in bitter winter's cold to reverse the course of the war. Whatever darkness felt by the Bociaks was tempered by a letter two days later from the War Department, a reminder that many soldiers who go missing end up as prisoners.

On Feb. 7, a postcard arrived signed in pencil by Felix himself, who was at a prison camp called Stalag 12A in Germany. While at least his parents knew he was alive, their anguish remains palpable as you turn the pages. In early April, Maryanna apparently clipped several articles that reported the liberation of the place in which Bociak was held, describing it as “a filthy, stinking barracks of a prison camp” where the American prisoners, “hollow-cheeked … many of them little more than skin and bones,” spoke of surviving on “grass soup.”

Imagine the reaction on 38th Street on April 24, 1945: The family received a telegram from the American War Department saying “your son, PFC Bociak, Felix, returned to military control 02 Apr 45.” Smolenyak, in her research, found an old clipping that described Bociak as "considerably underweight," but reported that he told his parents, in a letter, he was "very glad to be free."

The scrapbook includes a handwritten notation that Bociak received $88 from the War Claims Commission, payment based on a rate of $1 a day in return for any time in "which the enemy government failed to furnish the quantity or quality of food required by the terms of the Geneva Convention.”

It was not quite $90, as Lewis noted, as compensation for starvation.

Bociak died in April 1982, shortly after his 68th birthday. It is impossible to know who completed the scrapbook, which includes his certificate of death. But in the early pages, there is an image of Bociak in full uniform, early in the war, holding an infant and standing with a little boy – children Lewis suspects are Bernie and Nancy Wojtkowski.

Smolenyak, in her research, found the names of several surviving cousins, including Jeanie Bociak Kluga, 75, a daughter of Felix Bociak's late brother Andrew. Kluga, who moved to California 30 years ago, remembers the Wojtkowskis with affection and was saddened to learn of their deaths.

As for Felix Bociak, she was a goddaughter of the man she called “Uncle Phil.” She lived next door to him when she was a child on 38th Street in Niagara Falls, and she remembers her father speaking with sadness of the deep impact the ordeal in the prison camp had on his brother.

Thinking of her uncle and the scrapbook, Kluga said softly: "What a treasure." She looks forward to speaking to Lewis about the best place for it to be.

As it all comes together, Lewis sees it this way: Felix Bociak lived an extraordinary American life, and the scrapbook that lays it out in burning detail went first to a nephew and niece who never stopped looking out for one another. When they died the scrapbook could have ended up at the bottom of a landfill. Instead, it was saved by the sheer conscience and decency of friends from church, leaving Lewis to offer a double wish:

Sean Kirst: 'I would give my life': A WWII platoon leader's letter reaches generations

There is something in the wording – in a voice that somehow captures both a battle-worn officer and the younger brother, far from home – that makes it eternal, Kirst says.

Whether the scrapbook ends up with family or in a museum or some public space, he is simply glad it will continue to generate the reverence you already feel on every page.

Beyond that, while another Veterans Day slips into the past, Lewis hopes the entire saga is a reminder that quiet women and men we see all the time – the gray-haired neighbors we might hardly notice as they walk past – have often led lives in a low-key way of monumental meaning.

That understanding is why Mary Missert went to the estate sale, which now leads to one more clipping for the way this scrapbook ends.

A week before he was killed, Jimmy Burns wrote his mother: “If I do get bumped off, I know that I will meet you again. If I don’t here, it will be in heaven.” He also reminded her he had bought an insurance 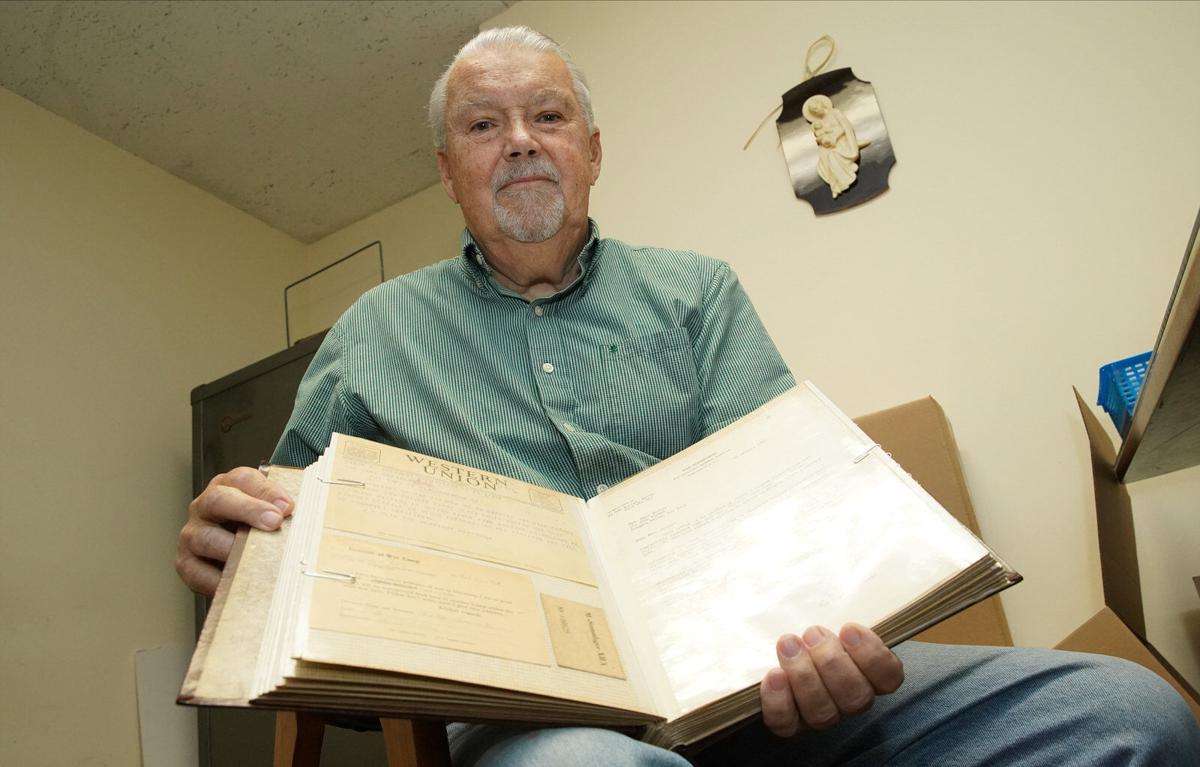 Paul Lewis hopes to find the best place for a scrapbook that follows the wartime journey of Felix Bociak. 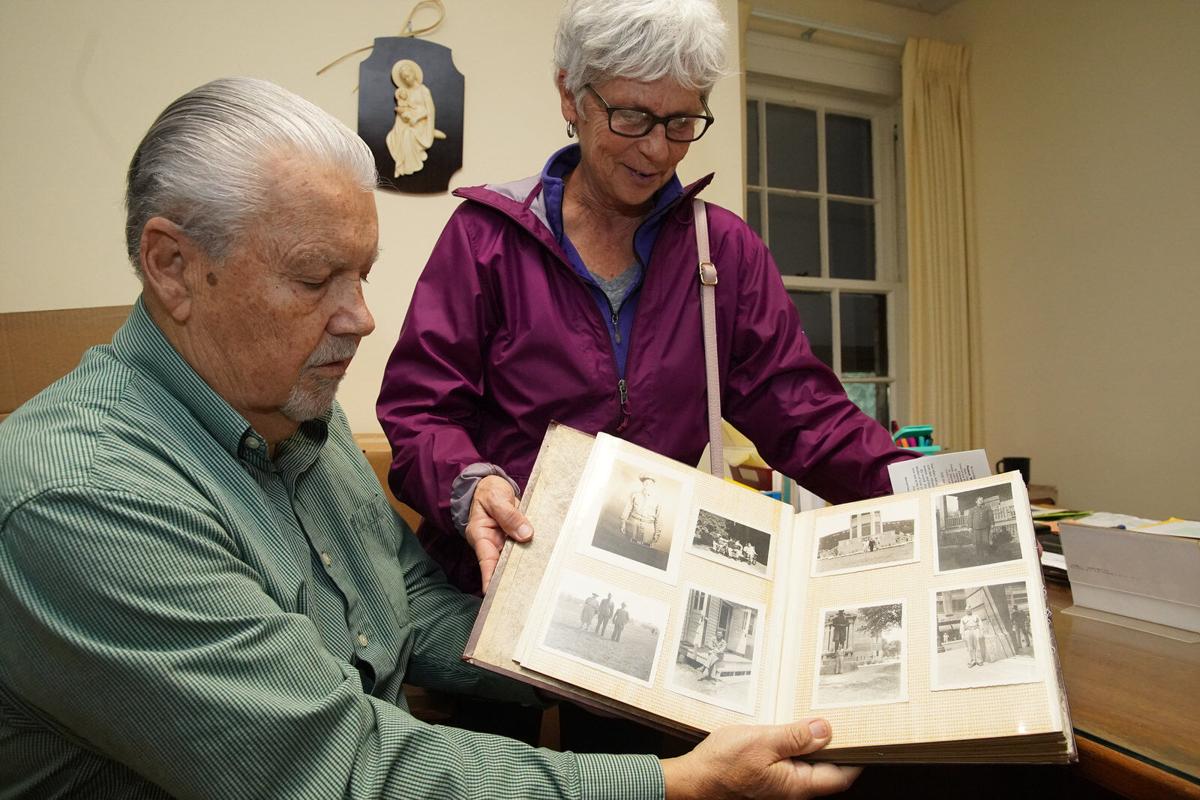 Paul Lewis and his wife, Donna, open up a scrapbook, nearly lost, that captures the wartime ordeal and rescue of the late Felix Bociak. 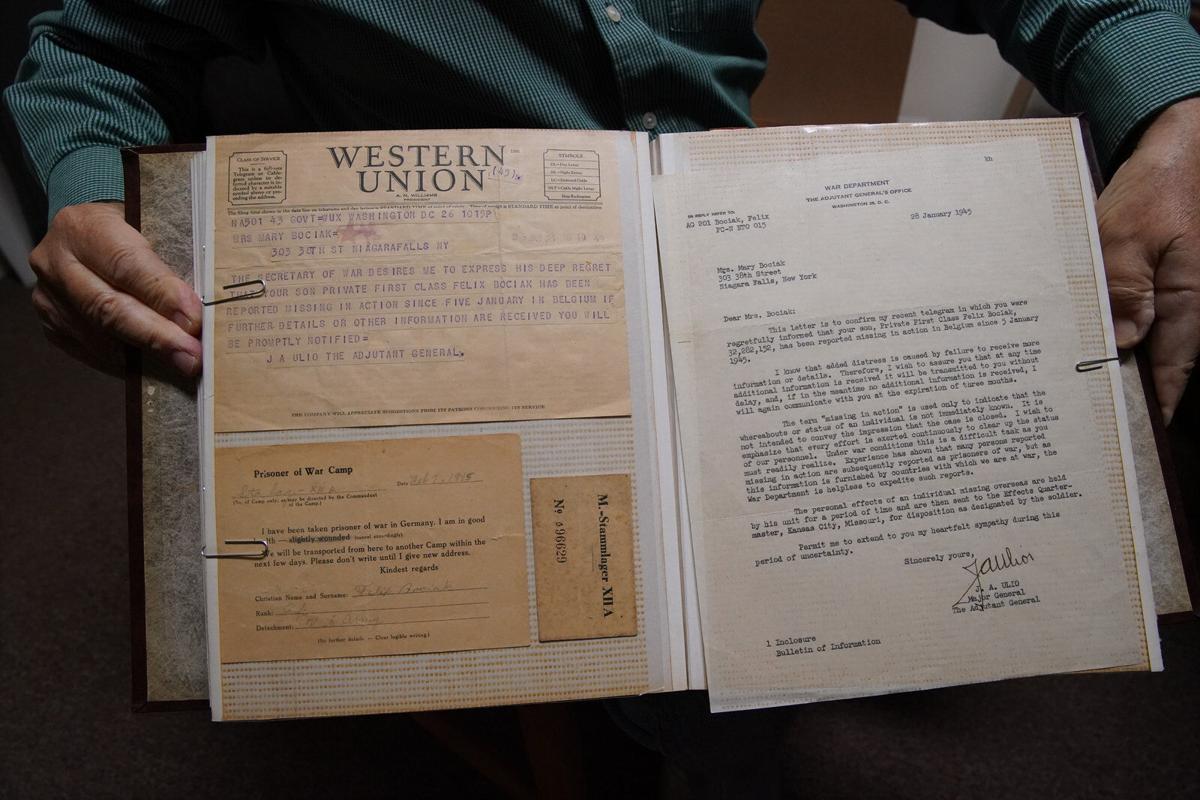 The scrapbook telegram that informed Felix Bociak's parents that he was missing in action. 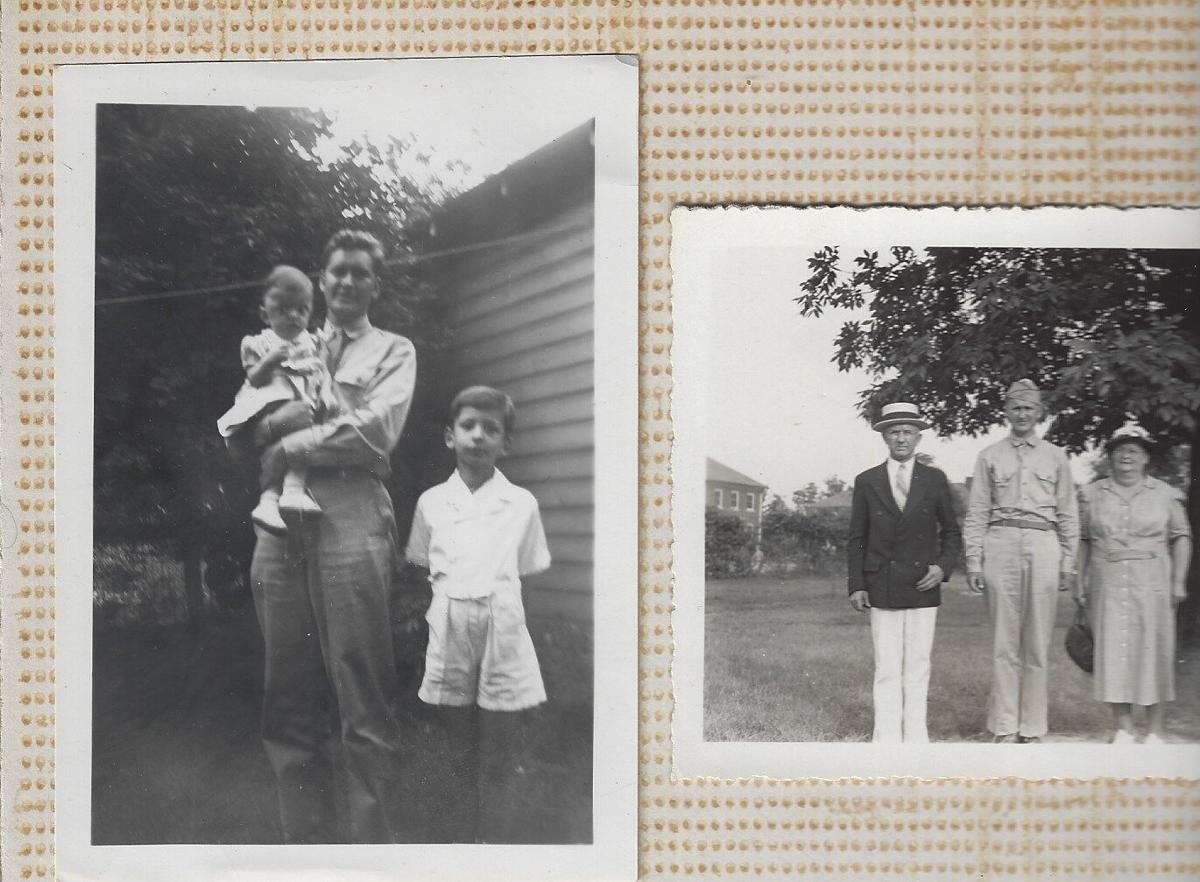 Images from a scrapbook: Felix in uniform with a couple who are almost certainly his parents (right) and left, with a boy and girl who most likely are his nephew Bernie and niece Nancy. 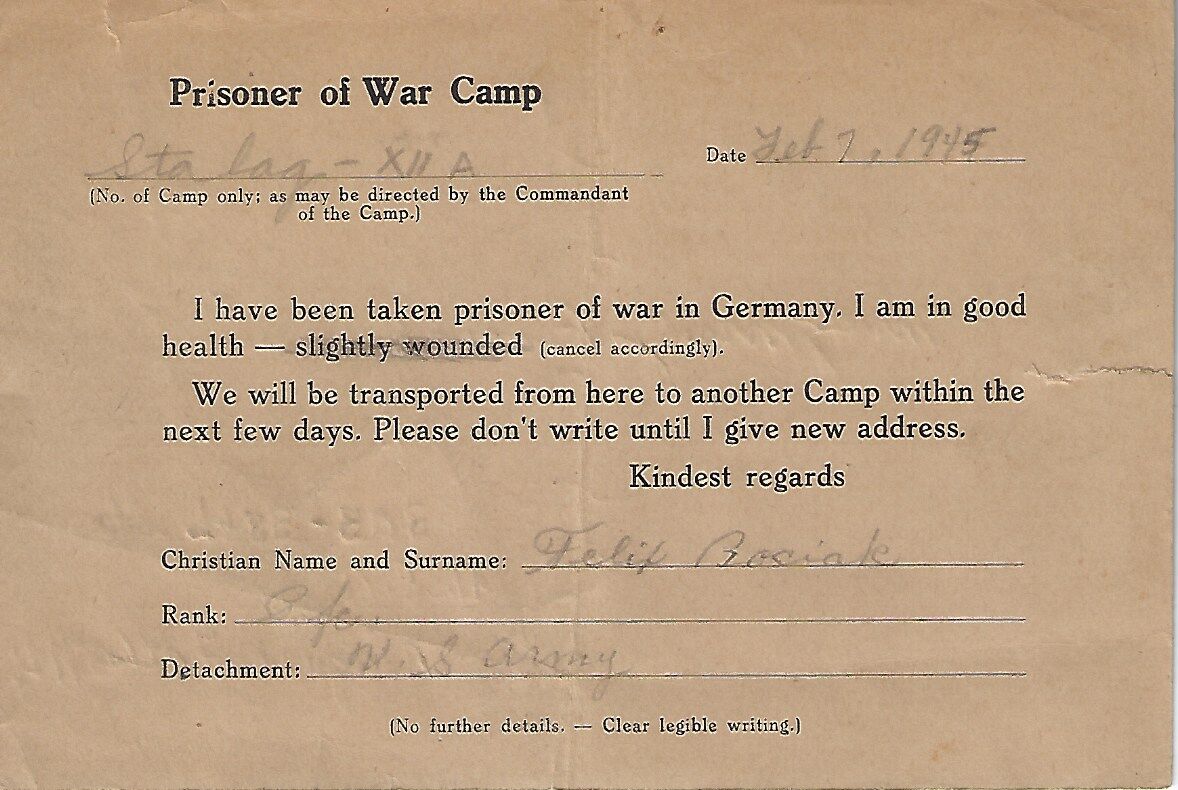 A postcard that told the Bociaks Felix was alive. 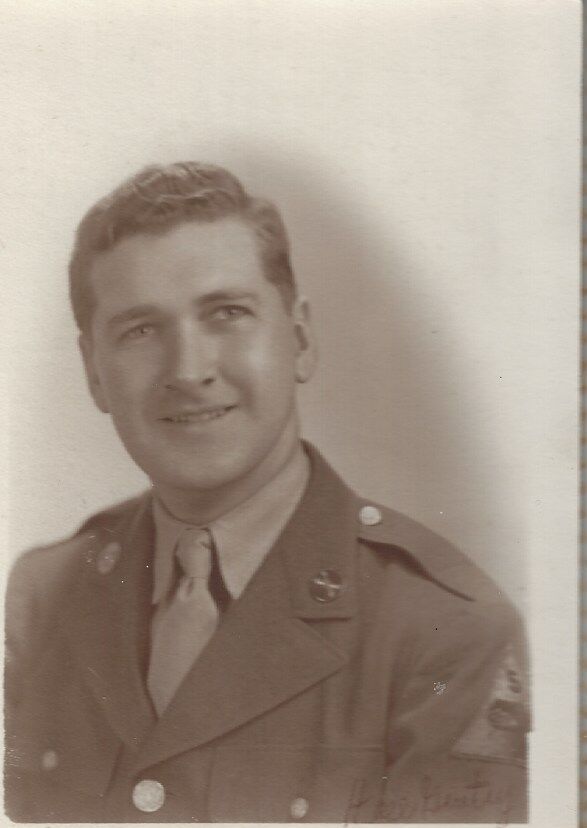